Summer jobs in the Catskills and in Washington Market in the mid-1950s turn out in 2003 to have more meaning than Schwartz knew at the time.

On every sunny summer morning I think of Joe Krieger. When my wife and I finish our breakfast in the garden and I stand up from the table, his gruff voice echoes in my mind. “Livestock first.” Obediently, I take the milk and cheese and jam to the refrigerator before returning to clear off the dirty dishes.

It was summer 1955. I was working as a camper-waiter in Camp Monroe, Monroe, New York. The position was a brilliant way of exploiting grown children. Since employers are not allowed to put 15-year-olds to work for seven days a week from 7 a.m. to 6 p.m., with long, unsupervised breaks in the American wilderness between shifts, what Camp Monroe did, as I suppose all the other summer camps outside New York did as well, was to turn the work relationship inside out, like Hiawatha’s mittens. Instead of paying the boys for their labor, the camps charged their parents $200 and called the jobs waiter training.

The work regime was hard and allowed for little leeway. At 7 we were beaten out of bed to leave our bunk for the mess hall, where each of us set two long tables for breakfast. Uncle Joe was in charge of the kitchen. (His brother Uncle Moe ran the camp activities.) Joe was an ex-prize fighter with a broken nose and a lot of lies to vouch for it. I did not envy him his job. The recalcitrant camper-waiters were bad enough, but Joe also had to deal with the chef, an authoritarian son-of-a-bitch who was capable of throwing ladlefulls of hot gravy into the faces of the lined-up waiters as collective punishment for the grumbling of any one individual, and with the kitchen staff, who I remember as a crew of amiable alcoholics who were in the habit of disappearing without notice.

Joe’s advice was good. Even if livestock does not mean what he thought it meant, we got his message perfectly well. Of course you should put the perishables back in the cold room before clearing the rest of the table. Whether it was necessary to enforce the injunction, which after all involved only slight food loss, with threats of physical violence, is still considered an open question in the Catskills. There was a broader lesson in Joe’s command. A person should always do first the things that can’t wait. Unfortunately, I have not been notably successful in the more metaphorical application of this piece of Krieger wisdom. I often get my work and life priorities wrong, but I never put away the vitamin pills before the left-over strawberries.

I was able to make a conceptual leap from another lesson I learned from Joe. This involved far more tension, tension to the point of conflict. In the summer of 1955 Camp Monroe did not have enough silverware on hand for the entire complement of eaters, if everyone on the grounds showed up for a full-course meal. The reason I happen to know this is that due to circumstances that have nothing to do with this memoir I was often the waiter confronted with the end-of-the-line shortfall. You would think that Joe would have been pleased when I called this structural but correctible deficiency to his attention. He was not. His invariable reaction, which I still consider a patent injustice, was “You again, Schwartz!,” as if it were my fault that he had too little silverware. The man was incapable of realizing that the identity of the last waiter who appeared for work was utterly beside the point. Nonetheless, I was the one who had to remove forks and spoons from the place settings of the runts at my station and move them to where the counsellors and the psychopaths sat. The lesson I learned from this is that people with power are irrational and that it’s a bad thing to work under them. 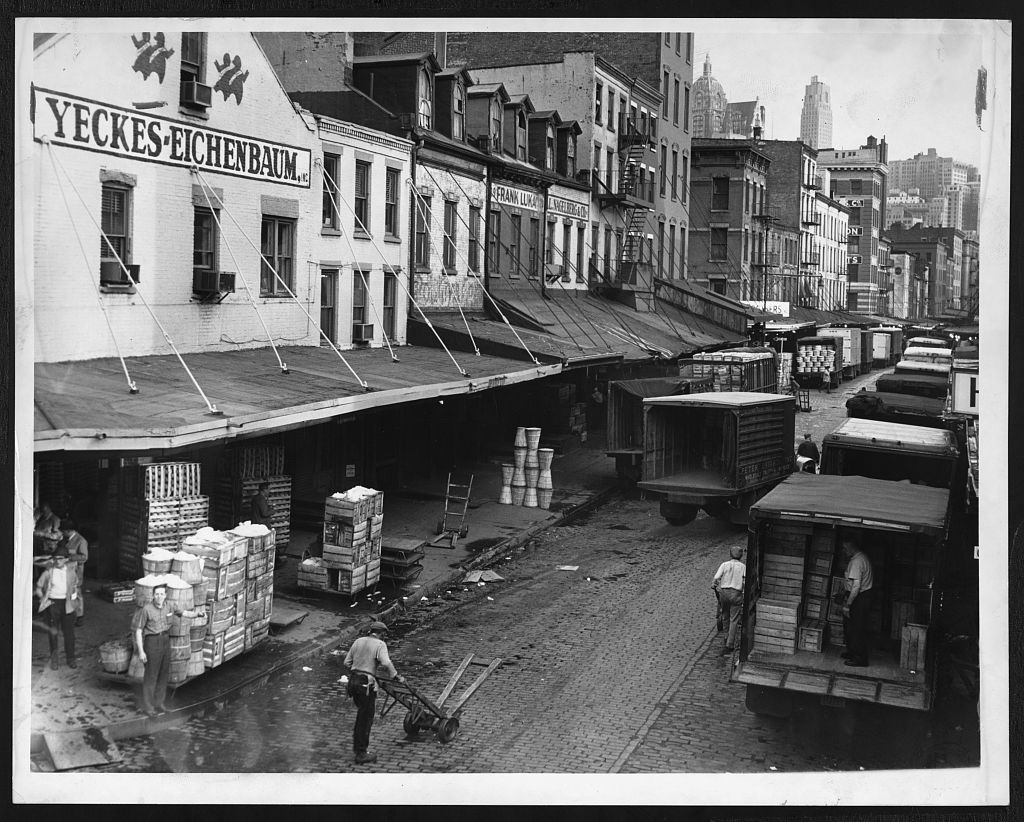 Washington Market, 1962, photo by Phil Stanziola in the World Telegram and Sun, Library of Congress

It had not crossed my mind before now, but my summer job in 1956 also involved foodstuff spoilage. For one exciting week I was a clerk at a shipping office for fruits and vegetables in Washington Market. This part of New York, off the Hudson River docks on the Lower West Side, was then filled with firms of the kind, all long gone. The place where I worked had a big rail map of the United States on the wall. In the course of the day, as telexes came in from across the country, the pins on the map, marking the location of box cars with produce, were moved right, from west to east. The company bought fruits and vegetables on the west coast and as they travelled cross-country tried to sell them. There was a lot of money riding on those cars, and the idea was to sell the contents as soon as you could, to buyers on the Plains, Chicago, the Midwest or, only if this failed, New York. If a box car crossed the Mississippi on its way to New York without a customer to take it off your hands, the place went into panic mode. Once a car reached the Jersey freightyards unsold, there was only a day or two before the contents would become unsaleable and had to be dumped.

This was quite an enjoyable job, and it made me feel a lot more grown-up than Camp Monroe. Why they asked me to leave after a week I do not remember. Was I responsible for the loss of a box car? Did I misplace a telex? I don’t remember. But then again I don’t remember exactly what Uncle Joe had against me either. Could these teenage experiences with perishables have had anything to do with my choice of study? In September 1956 I registered for my first course in art history.

© Gary Schwartz 2003. Published in Loekie Schwartz’s Dutch translation in Het Financieele Dagblad, Amsterdam, 2 August 2003. Published on the Schwartzlist on 19 June 2013, inspired by a spoken radio column (in Dutch, on the outstanding Sunday morning program OVT, on 16 June) by Nelleke Noordervliet, in part about a summer job of her own.

I’m on vacation. [This is still 2003.] Part of it I am spending sensibly at my desk, working off at least some old commitments, so I can return to work next week morally refreshed. For physical refreshment, Loekie and I returned last Saturday for three-and-a-half days to a wonderfully picturesque and relatively underpopulated part of Belgium called La Hesbaye in French and Haspengouw in Flemish. The region is spread over five provinces: the eastern portions of Vlaams-Brabant and Brabant Wallon, the north of Namur, the west of Liège, and the south of Limburg. Although La Hesbaye and Haspengouw are in principle the same territory, on the ground they are two different countries, divided by the French-Flemish language border. We came home in possession of five recommended routes for visiting the area: a Flemish brochure that takes you through three Haspengouw loops; and two French ones, Hesbaye insolite and Les blés d’or. Not one place on the Flemish-language brochures is visited in the French ones and vice versa. Locals with whom we spoke about our trip revealed themselves to be ignorant of even the best-known places across the line. If Belgium can survive, so, I suppose, can the world.

Responses are always welcome and will be answered: Gary.Schwartz@xs4all.nl

You can also make a donation to keep the Schwartzlist up and running.