On the painting of an Apocalypse that has already come and will never be really gone, by the Dutch Nazi artist Henri van de Velde.
“Oude en nieuwe wonden,” Het Financieele Dagblad, 31 January 2004, p. 25 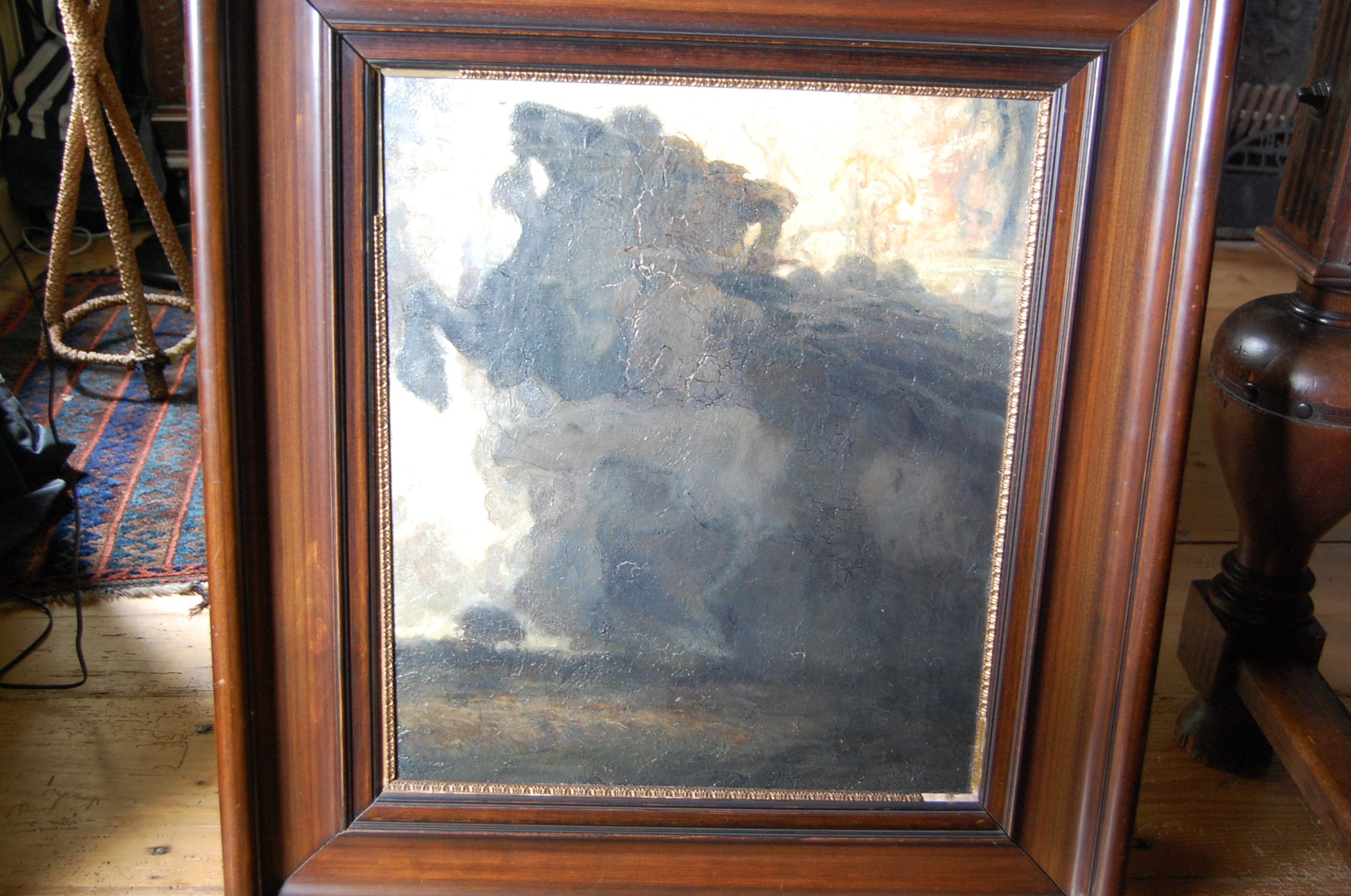 Don’t ask me how, but somehow or other in the 1970s my wife and I seem to have had enough time and enough spare cash to frequent the art auctions at Mak van Waay on the Rokin in Amsterdam. One purchase from this period that we still enjoy was a dark oil painting from the 1930s catalogued as Cloud formation by Henri van de Velde. The scene is indeed dominated by a vast dark cloud reaching down to the earth, a narrow strip of ground beneath a towering sky. The outline of the cloud is however suggestive of a figure, and when we got home we discovered that the cloud was being pulled across the sky by immense, sinister horsemen, one fiery and fierce, the other deathly pale. Above the dark cloud is a golden charioteer making off in a bright sky in the opposite direction, his arm raised, seemingly in a parting gesture. I decided (Loekie disagrees) that the painting is a mixed allegory: the lead Horsemen of the Apocalypse taking over the earth from Apollo, the Greek god of light, behind his quadriga. If van de Velde was prophesying the advent of War, Famine, Pestilence and Death, he was right.

At the auction no one bid on the painting, which even as a cloud study was obviously a work of merit. The auctioneer kept dropping the asking price, until at 100 guilders I stuck up my hand and had it hammered down to me. When I picked it up, I asked one of the regulars why no one else had bid. The answer was surprising. “Van de Velde was fout in de oorlog.” The artist was a Nazi sympathizer during the German occupation of the Netherlands in the Second World War. 30 years later he was still being shunned by the art trade in a country where many art dealers were Jewish and many had undergone the German occupation or worse. 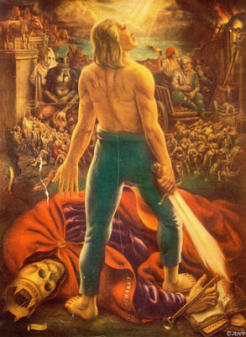 From then to now, I learned very little more about Henri van de Velde. Art historians and museums avoided him just as fastidiously as the art dealers. His name occurred only in books on collaboration. That is, until mid-November 2003, when he suddenly made the newspapers and the talk shows. In Belgium his most notorious painting emerged into the light of day after having disappeared in May 1945. It is a huge canvas of The new man, a long-blond-haired young giant with a flaming sword. He stands over the defeated skeleton of Reason, out of whose dead hands the books of Marx, Darwin and Voltaire fall to the ground. With his back toward us, he gazes past the ruins of European civilization upwards to a shining glow in the heavens.

What makes the painting notorious is that it hung in the office of Anton Mussert, the leader of the Dutch Nazi party, who had reproductions of it made for distribution among his followers. Various dates and accounts of its origins are in circulation. The following is information that I was given over the telephone by Bas van Lier, on the basis of consultation with Erik Somers of the Netherlands Institute for War Documentation. A cousin of van de Velde’s, a man named van Leeuwen Boomkamp, commissioned the painting from van de Velde in 1938. During the war, which in the Netherlands began in May 1940 with the German invasion, van Leeuwen Boomkamp presented it to Mussert. Nonetheless, the use of his painting as a Nazi emblem ruined van de Velde’s life after the war. It is a proof of the dulling effect of time that the Rijksmuseum, which in the 1970s could never have done such a thing, has expressed interest in buying the painting for its Dutch history department.

The ironies behind this story know no end. When The new man was finished, van de Velde displayed it in his regular gallery, Kunstzaal van Lier. The owner, Carel van Lier, who was married to van de Velde’s sister Elizabeth, was Jewish and was fated to die in German imprisonment for aiding the Dutch Resistance. On the other side of his family, van de Velde was related to a hero of the German Resistance. The brother of his second wife, a German, was executed for his involvement in the von Stauffenberg assassination attempt on Hitler. And there in the middle was Henri, the Dutch Nazi. A Nazi who – who can explain this? – had as a favorite subject, along with allegories and animals, depictions of Jewish rabbis. (Or could these be caricatures? I have never seen one.)

[Two paintings of rabbis by Henri van de Velde. Location unknown. Found in the years following the publication of the present column. The images of rabbis are not caricatures at all.]

New attention for van de Velde is also to be found in a book on Carel van Lier by his grandson Bas van Lier and in the fascinating exhibition Negerplastieken en moderne meesters: Carel van Lier (1897-1945) (Negro sculptures and modern masters) in the Museum voor Moderne Kunst Arnhem. (This is the last weekend – highly recommended, despite the unforgiveable lack of information on the displays.) Van Lier explored the margins of the conventional art trade: ethnographic art, new Balinese painting, photography, Dutch magic realists, exiled, out-of-favor German expressionists, naïves. It would be tempting to interpret van Lier’s display of The new man as another manifestation of his open-mindedness. However, a more likely explanation is that he stepped over his qualms about his brother-in-law’s Nazism because Henri van de Velde was a major investor in his gallery.

The moral ambiguities of this lose-lose story would mean nothing to Zvi Mazel, the Israeli ambassador in Sweden. When he saw an apparently admiring image of a Palestinian suicide bomber at an art exhibition in Stockholm, he demanded that it be removed from the show, and when it was not, he dismantled it himself. The main victim of this gesture is not Dror Feiler, the Israeli artist who made the piece, or art itself, as some have said. The main victim is Israeli diplomacy. Ambassadors are there to provide nations with an alternative to the use of force in achieving their aims. Israel needs such an alternative. In his aggressive self-righteousness, Mazel has done his country and the world of diplomacy a nasty disservice.

© Gary Schwartz 2004. Published in Loekie Schwartz’s Dutch translation in Het Financieele Dagblad, Amsterdam, 31 January 2004. Published on the Schwartzlist on 27 April 2014, with illustrations added, following the publication of a new book by Claartje Wesselink, Kunst van de Kultuurkamer, Amsterdam (Prometheus) 2014, which I have not yet read, but which contains a reference to the above story and painting.

Last week [that is, the next to last week of January 2004] we did it again. Loekie and I went to the viewing day of a lowdown but not dishonest auction house in Diemen, we faxed a long list of bids and got half of what we bid on. We bought two Amsterdam views of the 1930s, an English sporting print (reproduction?) after Stubbs in a nice frame, some Roman glass rings (a mistake; we thought we were bidding on jewelry), a 19th-century Statenbijbel (States Version of the Bible; another misunderstanding; I thought that was the number of a 17th-century Biestkens Bible) and a terracotta goddess with a goose that may be old but probably isn’t. It cost us a thousand euros, and although we were excited about winning the bids and disappointed about the ones that got away, I was left with the usual doubts: if I had gone out with 1000 euros to buy the best bunch of objects that I could find in the antique shops of Amsterdam and Utrecht, would I not have done better? Why don’t we ever do this, but do let ourselves get carried away in an auction? Anyway, here is the best item we bought, an Amsterdam canal view by the Hague painter and aquarellist Herman Bogman, in an image from the auction house website. 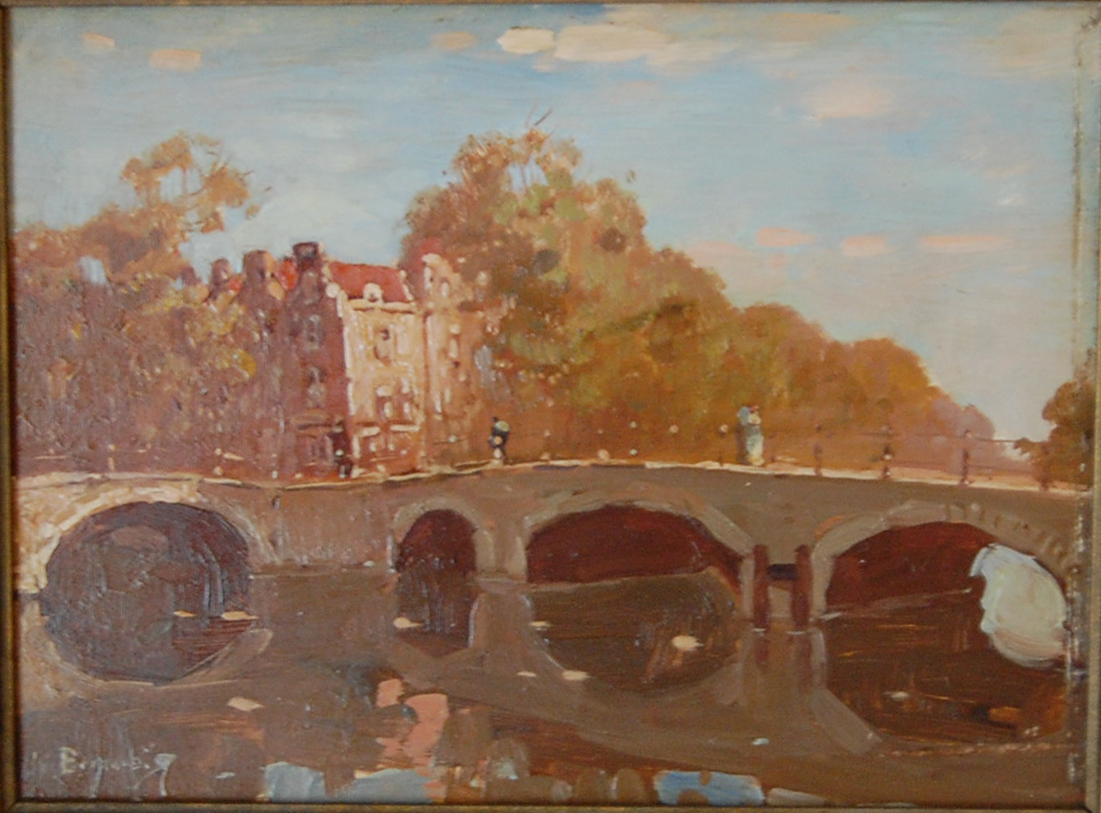 Not all of our recent museum visits were as successful as that to the Carel van Lier exhibition in Arnhem. Yesterday Loekie and I visited De Winterkoning (King for a Winter) in the Hague Historical Museum. It is a diminished and diluted version of a show on Frederick V of the Palatinate that was first held in the Stadtmuseum of Amberg, Bavaria, the former capital of the Upper Palatinate. The museum was empty except for one other couple, and we could see why. The exhibition tells a sad story, which I am not going to repeat, and it tells it sadly and predictably. It also suffered from a lack that bothered me in the van Lier show – the presentation was done on the cheap, without a catalogue and with a minimum of information on the individual displays. The Hague Historical Museum let you take a photocopied brochure around with a few lines on the objects, which were labelled with ugly little numbers from the five-and-dime.

For exhibitions that depend on an understanding of complex historical circumstances, the rationale behind this is hard to follow. I hope it is not a sign of more of the same to come.