A good provenance is not supposed to add to the value of a work of art, but it does. The information that an object was once owned by someone with famous good taste is worth money on the auction block. A collection mainly of Dutch 18th-century drawings that partakes of this quality, coming up at Sotheby’s Amsterdam on 19 May, is the Unicorno Collection, accumulated over the past 50 years by Saam and Lily Nijstad.

In the second half of the 20th century, the word “pedigree” took on a negative meaning for art historians. Why, they reasoned, should the identity of a past owner have any bearing on the quality or authorship of a work of art, when everything that really matters is locked up in the object itself? This derisory attitude toward pedigree was reinforced by the bad old habit of art dealers of trying to impress customers with the names of Prince X and Senator Y.

As good as these reasons may be, there are far better ones for paying close attention to the history of a work of art. When the duke of Devonshire put his Rembrandt drawings up for sale in 1984, buyers knew that the sheets had been in the family since 1723, and that the second duke had bought them from Nicolaes Flinck, the son of Rembrandt’s pupil Govert Flinck. This did not change the quality of the drawings, but it helped remove whatever hesitation anyone may have had about whether they were original works by Rembrandt.

That is one kind of value a provenance might have. A second has to do with ownership claims. This is acute mainly with regard to objects that changed hands between 1933 and 1945 in countries under Nazi domination. Any doubt concerning the possibility that the object may have been extorted or seized from an owner will affect its value. An unequivocal chain of ownership proving this was not the case is worth money on the auction block.

The nicest kind of added worth a provenance can offer to a work of art is the occurrence, in the list of previous owners, of collectors with outstanding taste. This is the case of the 504 drawings to be sold in 387 lots at Sotheby’s Amsterdam on 19 May, in a single-owner sale called “The Unicorno collection: 55 years of collecting European drawings.” The viewing days, from 14 to 18 May, are worth a visit even for museumgoers who do not think of themselves as collectors. The jargon term “single-owner sale” is not altogether applicable in this case. The collection is the joint property of a husband and wife, Saam and Lily Nijstad. (The collection takes its name from Lily’s maiden name, Einhorn.) Saam Nijstad is a distinguished dealer in paintings, a member of one of the dynasties of Jewish dealers in antiques, books and art that emerged from the east of the Netherlands in the 19th and 20th centuries. Nijstad, a sociable man and a born networker, with an infectious smile and chuckle, is more than an art dealer. He is also a writer, art historian and a personality in the international art scene. His books are personal, anecdotal, idiosyncratic, written with a disarming combination of egoism and modesty.

As an art historian, he is the author of an impressive study in the Jahrbuch der Berliner Museen on the Man with the golden helmet in Berlin. On the basis of a determination of the probable origins of the helmet, he comes up with very convincing evidence that the painting, formerly considered one of Rembrandt’s greatest works, was made in Augsburg by the German Rembrandt pupil Johann Ulrich Mayr. Nijstad’s respect for art history has paid off for his collection as well. The drawings in it have been catalogued by some of the best specialists in the field.

Saam’s expansiveness is tempered by Lily’s gift for deflating overstatements – in the most friendly way, of course. To those who know them, their account in the introduction to the auction catalogue of the way they collaborate on purchases is entirely plausible: Saam is the enthusiast and Lily the critical judge. These ongoing conjugal negotiations gave the collection, for all its eclecticism, certain common features: the condition of the sheets tends toward immaculateness; the artist’s accuracy is taken seriously, especially in depictions of nature and architecture; the collectors have a weakness for color, charm, delicacy, decorativeness and unpretentiousness and a certain respect for decorum and convention. And the pedigree value of the Unicorno Collection does not begin with the Nijstads. Many of their drawings come from other distinguished collections like those of Bernard Houthakker and I.Q. van Regteren Altena. 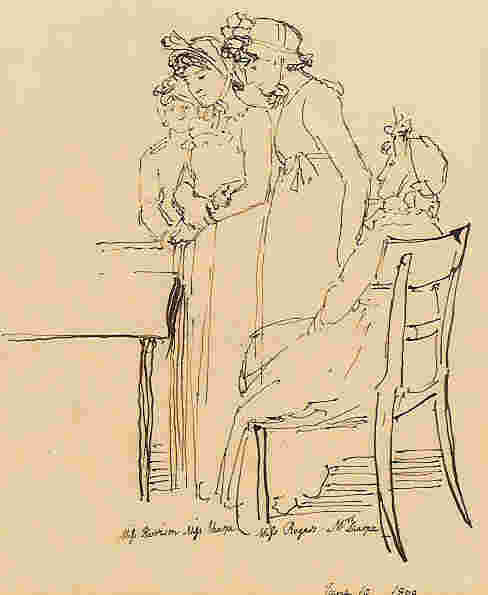 Recently I called Nijstad to ask him for an e-mail address or fax number in order to send him a document. “I don’t have a computer or a fax machine,” he said. When I remarked that he was living not in the 21st or even in the 20th but in the 19th century, he replied, “If it’s all the same to you, I’d prefer the 18th.” I should have known. The Unicorno collection contains few sheets later than 1800. (One of my favorite drawings is emblematic in this regard. It is a sketch after life by John Flaxman inscribed “Miss Harrison Miss Sharpe Miss Rogers Mrs. Sharpe / June 10 1800,” a living scene from Jane Austen and a promising object for research in social history. The estimate for this sheet is €900-1200; many objects in the sale are in fact within the reach of first-time buyers.)

The best proof that the fame of the seller constitutes a real value is that it has measurable financial worth. In his column in Het Financieele Dagblad last week, Bert Bakker alluded to an interesting article on the worth of art collections in the journal Jong Holland in 1993. (Regretfully, I note that the author, Fred Hendriks, former co-director of the Philips Pension Fund, was imprisoned a few years later on suspicion of having participated in a financial swindle. He paid a large settlement to the Department of Justice rather than go on trial.) In this careful piece of research, Hendriks showed that buyers at single-owner sales of famous collections pay an extra amount he calls the “collection premium.” For most private buyers, the premium is well worth paying, for the extra assurance and distinction it brings. Especially if they bring out their bid at the auction itself, which thanks to the Nijstad spirit is bound to be a delightful occasion.

Yesterday Loekie and I visited for the first time a place to which we know we will return. De Wiersse is an estate in the east of the Netherlands, in an area called De Achterhoek, The Back Corner, wedged into Westphalia. The occasion was the opening of a small exhibition of work by the English artist Peter Blake, one of the creators of Swinging London, best known for his jacket design of Sergeant Pepper’s Lonely Hearts Club Band. The work on show was much more private. Half were drawings made in the 1970s for his host at De Wiersse, Peter Gatacre. The other half were illustrations of Alice in Wonderland for which Blake used Gatacre’s children as models. The children, William and Amelie, were present as well yesterday, with children of their own. Whether or not as a result of being immortalized by Blake as Alice, the King’s Messenger and the Mad Hatter, William and Amelie have something perennial youthful about them.

De Wiersse, its archives and collections and gardens, is one of the great cultural treasures of the Netherlands. Gatacre and his wife Laura work on its conservation with extraordinary dedication and skill. The atmosphere at De Wiersse is thick and nourishing with history and art and as unpredictable as Alice. It was an intoxicating afternoon.

I mourn the death of my study friend from Johns Hopkins University in the early 1960s, H. Diane Russell. A notice on her work is in the last issue of CAA news.