The papers are full of long stories on a short letter in the New England Journal of Medicine. The authors, Harvard neurobiologists, claim that his self-portraits contain certain evidence that Rembrandt was wall-eyed and that this had consequences for his artistry. Schwartz begs to differ. The scientists simply ignore a mass of material in which no such aberration is visible, and they fail to notice that similar effects as they observe in Rembrandt portraits can also be seen in self-portaits by others.

Not being a subscriber to the New England Journal of Medicine, I learned about the latest new contribution to Rembrandt studies from excited stories in the daily papers. Two Harvard neurobiologists, Margaret Livingstone and Bevil Conway, it seems, had proved in the latest issue of that famous periodical that Rembrandt was wall-eyed and that this made him a better artist.

Being too conscientious to respond in print before reading their complete publication, I went to the website of the NEJM and paid a ten-dollar fee to download the article. To my disappointment, it turned out to be not a thorough scientific study but a 400-word letter to the editor. I quote the crux: We examined high-resolution images of the oil paintings and etchings listed in a comprehensive catalogue of self-portraits spanning Rembrandt’s career. [That is, the exhibition catalogue Rembrandt by himself, London (National Gallery)and The Hague (Mauritshuis) 1999-2000.] Most show one eye gazing directly at the viewer and the other eye deviating laterally. We quantified this pattern in all the Rembrandt self-portraits in which both eyes can be seen well enough to estimate the position of the pupil … within the opening between the eyelids. For each portrait, we aligned an ellipse with the eye contour, then aligned a circle with the circumference of the iris, and then measured the horizontal position of the circle along the eye contour. We found that Rembrandt portrayed his eyes as exotropic in 35 of the 36 self-portraits.

This is a strong claim, and if it had indeed been proven, it would shame all previous writers on Rembrandt, myself included, for not having noticed it before. But Livingstone and Conway do not come anywhere close to proving their point. To begin with, the material with which they were working is not “high-resolution images” at all. They are lithographic reproductions that have been screened at the standard 56 or 64 lines per inch and perhaps retouched somewhere along the way. In the second place, their choice of images, which I checked against the exhibition catalogue, is so skewed as to raise suspicions about the authors’ objectivity. They have left out of their sample the drawings, which are certainly more directly observed than etchings, and by my count 12 paintings in which the eyes are visible enough for measurement and where I, for one, see no deviation at all. (For the record: cat. nrs. 5, 7, 8, 10, 14a, 14b, 16, 34, 56, 66, 83, 85.)

The graph accompanying the letter, which claims to visualize the aberration, is so obscure and illegible as to be meaningless.

In the course of their work, the authors might have noticed other aspects of Rembrandt’s eyes that should have shaken their simple certainty. In aligning an ellipse with the eye contour, didn’t they observe that the contour can differ radically from portrait to portrait? In some, it takes the shape of smooth, almond-shaped curves (nr. 40, for example), while in others it may be subtly irregular (33) or jagged (46). The musculature beneath the eye can take the rather formulaic three-arc form that Rembrandt used again and again in his portraits and self-portraits (35, 57 and many others); alternatively, it may be nearly smooth (18, 70a), take the form of a single bulge (34) or vary in place and angle (74, 85). (Almost never does Rembrandt provide a sitter of any age with proper bags under the eyes, although some must have had them.) Did the neurobiologists notice that Rembrandt the self-portrait subject sometimes had eyelashes (81, but barely) but mostly did not? Does this mean that Rembrandt the man didn’t have them? No, it means that on this scale – the scale of Livingstone’s research – Rembrandt was an unreliable eyewitness.

Had they flipped the pages of the catalogue beyond the Rembrandt section, Livingstone and Conway would have found similar deviations to the Rembrandts they measured in self-portraits by Gerrit Dou (89), Gerbrand van den Eeckhout (91) and Govert Flinck (93). Did Rembrandt choose his assistants only from among the 10% of mankind that lacks stereo vision?

In brief, the authors have mistaken a catalogue of reproductions for a medical dossier. Whether the phenomenon they single out is real or has meaning still remains to be investigated. The jump in their article from Rembrandt’s supposed stereoblindness to speculations about his artistry – their real interest – is utterly misplaced.

Nonetheless, they have performed a valuable service for Rembrandt studies. In taking the truth value for granted of reproductions of art works in an exhibition catalogue, they remind us of the many uncertainties attending this subject. How many of these objects were really made by Rembrandt? How many are really self-portraits? What is their present-day condition and how does this relate to the way they look when they left the studio? What does their inconsistency in so many details say to us? These questions have not been posed often or hard enough.

How one mistake leads to another. Two weeks ago I wrote that the third wife of William of Orange, Charlotte de Bourbon, was a widow with six daughters when William married her. As an attentive reader pointed out, this was not the case. Charlotte had never been married before, and her daughters were all born during her marriage to William. My only excuse is that I was relying on information in the book under discussion, A. Th. van Deursen, Maurits van Nassau, 1567-1625: de winnaar die faalde. On p. 16, van Deursen writes of Maurits’s reaction to William’s marriage: “He accepted his new stepsisters completely.” Assuming that the six girls were indeed stepsisters, as the author wrote and not the half-sisters they were, I concluded that they must have been born in a previous marriage, and turned Charlotte into a widow. My apologies.

With thanks to Jaco Groot, the following later addition to the discussion: 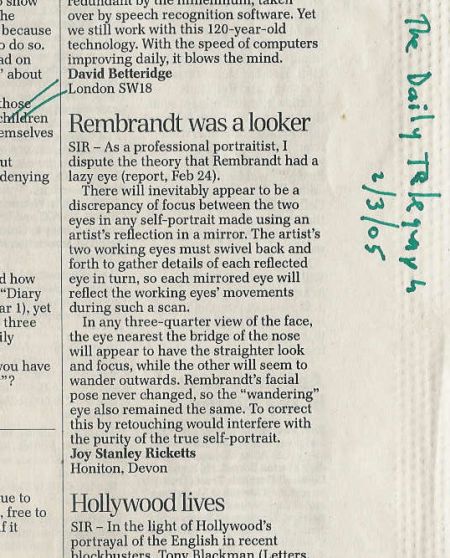 At a later date images of or links to the works referred to will be inserted, but not right now. This week Loekie and I lost a dear old friend, Lidy ten Doesschate, and my cousin Jerry Bloom. On Tuesday we are leaving for Rhodes to participate in what looks like a remarkable event called the Second World Public Forum “Dialogue of Civilizations.” If there is not a column in this I will be greatly disappointed. On 1 October I begin on a three-month leave of absence from my job at CODART, in which time I hope to finish the draft of my new book on Rembrandt. Schwartzlist will suffer.