The Dutch children’s book star Miffy is 50 years old this month. Her statue, by the son of the creator of Miffy, Dick Bruna, stands on a square in Utrecht. It is executed in bronze and stands on a granite socle. Only the hardest of hard materials can be used for outdoor art in the Netherlands. Schwartz worries about the extreme degree of vandalism in his adopted homeland.

To honor her 50th birthday, I went to the home town of the most successful artistic-literary figure in the Netherlands of the past half-century. In English she is called Miffy, which does not capture the fun of her Dutch name, Nijntje. (Pronounced somewhere between Nanetche and Ninetche.) This is a diminutive for Nijn, in turn a short form for Konijn, rabbit. Nijntje is a little girl bunny rabbit, the less-is-more creation of the Utrecht artist Dick Bruna. Nijntje is drawn with the barest minimum of graphic features; all her books are small and square, with 12 primary-color drawings facing 12 quatrains.

A contributing factor to Nijntje’s unrivalled popularity, with worldwide editions exceeding 80 million copies, is that she adds a valuable instrument to the toolkit of a growing child. When parents begin to accuse them of naughtiness, little kids can use Nijntje to project an image of themselves as the simple and innocent creatures that their parents apparently think they should be. Her guilelessness provides a cover for the multitude of sins of which two- to four-year-olds are made to feel guilty. 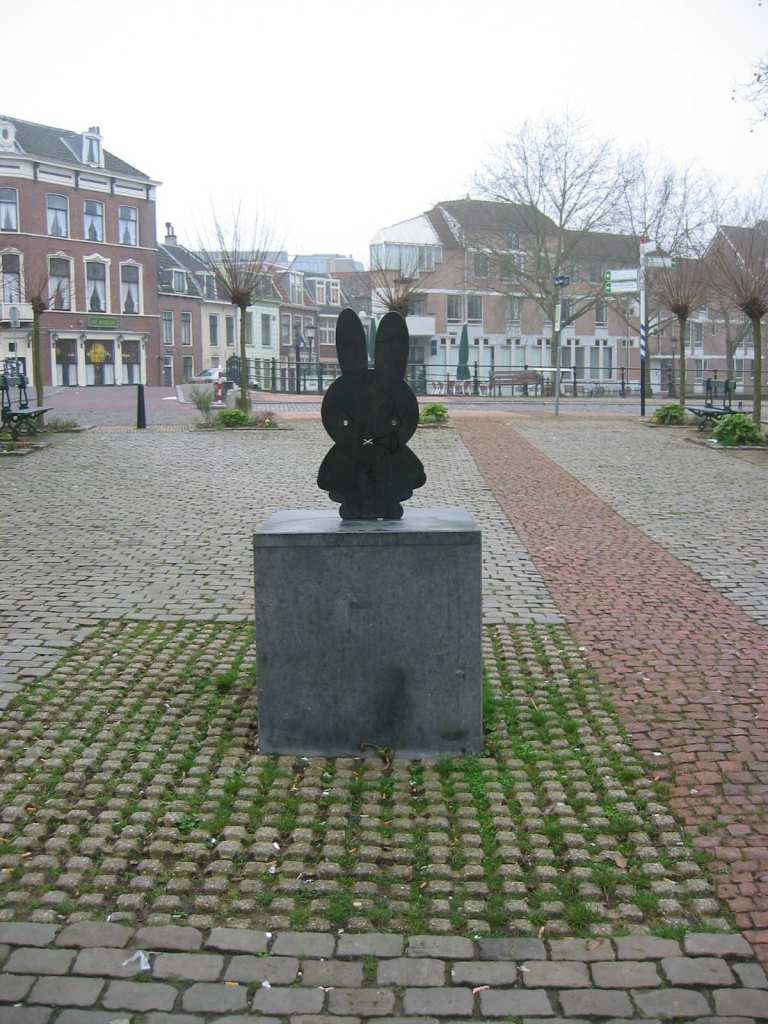 Nijntje, aka Miffy, on her pedestal, on her square in Utrecht.
Sculptor: Marc Bruna; photographer: Loekie Schwartz

Nijnjte has a founding myth. She was drawn after a rabbit ragdoll belonging to Dick Bruna’s son. In 1994 son Marc, who grew up to become a sculptor, was given the chance to make a Nijntje of his own. For a small square in Utrecht he was commissioned by the Soroptimist Club to create a three-dimensional if flattish Nijntje, which stands there still, in a spot fondly called Nijntje Pleintje. (Nijntje Square [diminutive of tenderness and size]; in Dutch it rhymes.)

That Marc’s outdoor Nijntje could not be executed in cloth is apparent. However, the choice of materials was more limited than you might think. From my own tenure a quarter of a century ago in the Utrecht advisory committee for outdoor art, I remember that extremely aggressive vandalism made it impossible to place anything softer than granite, steel, concrete or bronze, deeply anchored in an industrial-strength socle. It did not surprise me that Nijntje was executed in bronze on a granite base, when a more pettable material would have been preferable. This severe curtailment of artistic freedom is accepted as a fact of life not just in Utrecht but all over the country.

The functionary responsible for outdoor art in Utrecht, Rimme Rypkema, told me that vandalism has not diminished since and that softer materials are still taboo. A stone sculpture of a sitting nude by Joop Hekman that stood in the Julianapark since the 1940s was recently destroyed with a hammer and had to be removed as a total loss. Rob Birza could use polyester for a recent installation not because of reduced violence but because some synthetic materials are now tough enough to withstand hammer attacks. Nijntje herself has been disfigured by graffiti.

If Dick Bruna’s Nijntje is an emblem of not quite realistic innocence, Marc’s Nijntje too points up an important contradiction in the Dutch self-image. The high level of vandalism in Holland and its too easy acceptance by the rest of the public are a major unacknowledged deficiency in Dutch civil society. The case of the bronze Nijntje proves that we are considerably less civil than we think we are. If the government is looking for relevant measures of our values and norms, this is a good place to start. When the children of Utrecht get a Nijntje they can cuddle up to, we’ll be on our way.

After writing this piece, I learned that last week the Dutch daily Algemeen Dagblad published a list of Dutch towns with the highest rates of vandalism, and that my own Maarssen was number 1. To tell the truth, I am relieved. The endemic vandalism in Maarssen has always upset me; now at least I know that it isn’t indicative for the country as a whole.

It’s bad enough when bus stops are wrecked, but in the past year the expensive cars of neighbors on our block have been scratched from front to back with a penknife or a key – twice. Just picturing the miserable kid – it’s almost always teenage boys showing off to their friends – walking along the cars and creating a thousand euros worth of damage in a few seconds just for the fun of it is enough to turn you into an anti-vandal vigilante. (Last night, I just found out, a bunch of kids walked across some cars on the parking area behind our house, denting the roofs.)

Far worse is a new Clockwork-Orangelike trend that has taken hold – dropping heavy paving stones from highway bridges onto passing cars. A 30-year-old woman was killed this way in January by a bunch of teenagers. Their example inspired imitation, although so far without more fatalities. The authorities are talking about fencing over “high-risk” bridges.

Why is it that callous manslaughter of this kind, of a chance, innocent victim, did not create the same kind of outrage as the motivated murder of the not-so-innocent Theo van Gogh. Has anyone ever studied the modes of reaction to different kinds of death?

The Netherlands is going through a political crisis that is related in ways that are not being discussed to its social crisis. The small Democratic Party (D66) entered the present coalition with the aim of realizing its long-standing program for electoral reform. For this purpose it took a cabinet seat dedicated to “Bestuurlijke vernieuwing,” governance renewal. Minister Thom de Graaf has spent the past two years working on plans for an elected burgomaster (mayor) to replace the present system in which burgomasters are appointed by the Crown. Last week a vote was taken in the Upper Chamber of Parliament to pave the way for this move. The vote was on a technical matter: the present manner of appointing burgomasters is written into the constitution. In order to change the system, that article first has to be “deconstitutionalized.” For an issue of that kind, a Parliamentary majority of two-thirds is required. That means that the votes of the largest opposition party are needed, in addition to those of the coalition parties. De Graaf worked on this aspect of things assiduously, conferring regularly with the Upper Chamber faction of the largest opposition party, Labor. This seemed to be fairly straightforward, since the Labor Party as a whole has long been in favor of electing burgomasters and since the Labor faction in the Lower Chamber has already voted for deconstitutionalization.

Well, sir. When it came to that vote, the Upper Chamber Labor Party faction voted against it. The leader of the faction, Ed van Thijn, resented what he now called the bullying behavior of a party, D66, that “barely has a right to exist.” He also showed himself terribly concerned that townships might not have enough time to prepare for such a fundamental shift in their way of doing business. De Graaf handed in his ministership, the other two D66 members of the cabinet are considering doing the same, and the government is tottering on its foundations.

Discussion in the press, as you can imagine, is about motives and hidden agendas and personalities and political responsibility. I see the problem differently. The Netherlands is the only country in Europe where burgomasters are appointed by the central government, on the basis of national political considerations. This fits perfectly well into the rest of the system here. We have a powerful Upper Chamber of Parliament whose members are not chosen directly by the electorate. The head of state is a hereditary monarch. In Parliamentary elections you vote for a national party list, not a person to represent you. The government is formed in a process presided over by the monarch that has no legally binding relation to the elections. In other words, Dutch voters have virtually no say over who gets to govern them, a plain fact that no one here seems to acknowledge.

Anti-change politicians like to pretend that the voter is on their side by asking, “Does the man in the street really care how his burgomaster gets chosen?,” not realizing how cynical this is coming from someone who acquired office through barely disguised patronage. In a system where the voter has never been given real power, apathy and disinterest are of course to be expected. Only D66 has consistently tried to improve the democratic calibre of the country. Now, after 40 years, when it was close to achieving the smallest, most innocuous of the required reforms, it has been shot down on technicalities, compounded by personal rancor and political tactics, by the largest left-of-center party in the land.

These people behave as if time is on their side, as if they can refuse indefinitely to share power with the electorate. What is required, I wonder, after the murder of a populist critic of this system, Pim Fortuyn, at a moment when two members of parliament, Ajaan Hirsi Ali and Geert Wilders, have been living for months in safe houses, hiding from (real or imagined) jihadist assassins, to bring across to the Dutch government the point that they are losing it? If the government does not transfer real power to the broad electorate, it will inevitably cede control to extremists. This is not to say that electoral reform is a panacea for all problems in the country. But resistance to electoral reform of the kind that Ed van Thijn so abjectly displayed is a sure means for feeding dissatisfaction and bitterness. Even if the man in the street does not realize this, one legitimate source for bitterness is that the Dutch voter is subtly but very effectively disenfranchised.

If you detect a more critical tone towards the Netherlands in this column and its P.S. than you are used to hearing from me, well, you’re right. I’m afraid that a certain misplaced smugness at the top of Dutch society and a scary unruliness at the bottom are starting to get to me.

Hope still lives that the recommendation at the end of installment 229, “The glory of Maarssen Station,” for a work of art recreating the first Doppler experiment, may actually be followed. The idea has come to the attention of the country’s most popular weatherlady, Monique Somers of the Royal Netherlands Institute of Meteorology, and she is pursuing it further.

Published on 16 March in Amsterdam. My short essay, “Binnenstappen in de historische ruimte” (Pieter Saenredam, Interior of the St. Odulphuskerk in Assendelft, 1649), in De historische sensatie: het Rijksmuseum geschiedenisboek (The historical sensation: the Rijksmuseum history book), Amsterdam (Thomas Rap) 2005. The book was presented in the Rijksmuseum that evening, with an audience of 300 who came to hear 10 of the 50 essays in the book read by the author in front of the work concerned. I gave my talk four times.