A Pope, appointed as he is for life, always makes you think of death. Schwartz meditates on the subject, while offering some good advice to the successor of John Paul II.

As he lay dying, Pope John Paul II was asked to sign documents ratifying the appointment of some new bishops and archbishops. A Vatican spokesman explained that this was a perfectly understandable practical measure forestalling a delay possibly of weeks before there is a new Pope, with nothing ideological or political about it, etc., etc. I did not believe him for a moment. I had a powerful rush of the indignation that institutional insincerity always brings out in me.

I was reminded of a piece of art-world gossip I once heard. When Picasso was dying in 1973 at the age of 92, he was visited in the hospital by the 89-year-old Daniel-Henry Kahnweiler (1884-1979), who had been his dealer on and off for more than 60 years. Kahnweiler did not come empty-handed. He brought with him a pile of lithographs that Picasso had not yet signed. With the artist’s signature, they were worth considerably more, and the two old millionaires hated to see the difference go to waste. Picasso signed. No hypocrisy there. Although I think of myself as less ambitious than John Paul II and less greedy than Picasso and Kahnweiler, these stories worry me. I look forward to a moment some time in the future when I can say to myself, "You’ve done enough, relax and enjoy yourself."

Karol Wojtyla was the first non-Italian to become Pope since Adriaen Florenszoon Boeyens (1459-1523), the son of a carpenter in Utrecht, who as Adrian VI reigned for only a year and a half. The Catholic Encyclopedia writes of him: "His unrelaxing activity and Rome’s unhealthy climate combined to shatter his health. He died appropriately on the feast of the Exaltation of that Cross to which he had been nailed for more than a year (14 September, 1523)." Others say that he, like his predecessor Leo X, was poisoned. The deaths of both these hard-working, sickly non-Italian Popes are compared to the death of Christ on the cross. That too is not a model to which I aspire.

Sick or healthy, because a Pope is appointed for life, he always makes you think of death. Because he stands for a nearly 2,000-year-old tradition, he makes you think of duration beyond death. And because he is said to represent God on earth, he makes you think of eternity. The three rings of the Papal tiara could stand for mortality, survival in time and existence unaffected by time. The thought that our lives might stand in relation to some form of timelessness is enough to temper, if only a bit, my inclination toward uncompromising atheism.

John Paul II proved to the world that Catholicism is not necessarily and incurably anti-Semitic. If he could do that, his successor can dispense with the inhuman prohibition of birth control and self-chosen death. He can also dismantle the conditions within his church – giving "celibate" males fargoing authority over the private lives of believers – that further the sexual abuse of children. If he does this, and if he runs a curia that will not bother him with political paperwork on his deathbed, the new Pope will pass on more peacefully than his predecessor. So will a lot of other people. Amen.

Last Sunday we celebrated Loekie’s birthday with a party for 100 people in our garden and house. (Her actual birthday is March 30th, also the birthday of Francisco Goya, Vincent van Gogh and Erwin Panofsky. Beat that!) The event was orchestrated and largely performed by Loekie. With fearless bravura, she likes to make new dishes for dinners and parties, dishes she never made before. This time it was gravlax, two huge salmons that she marinated in the shed for two days, turning them over every 12 hours and then cutting them into bite-sized slices. The offerings were filled out with a mushroom quiche and a leek quiche, one black tapenade and one white one (contribution of daughter-in-law), chicken wings, patés, quail eggs topped with black faux-caviar (daughter and daughter-in-law) and other varieties of finger food, a pasta salad (niece), cheeses, berries, five kinds of pie (daughter) and soya-milk-based chocolate turbans (sister). We hosts never got to taste most of them. Washed down with much Alsace pinot blanc, some rioja and Leffe blonde. The guests did justice to the feast and to the spirit of the occasion. Several of them rediscovered long-lost acquaintances, school friends and even relatives. Good vibes, we had a wonderful time. 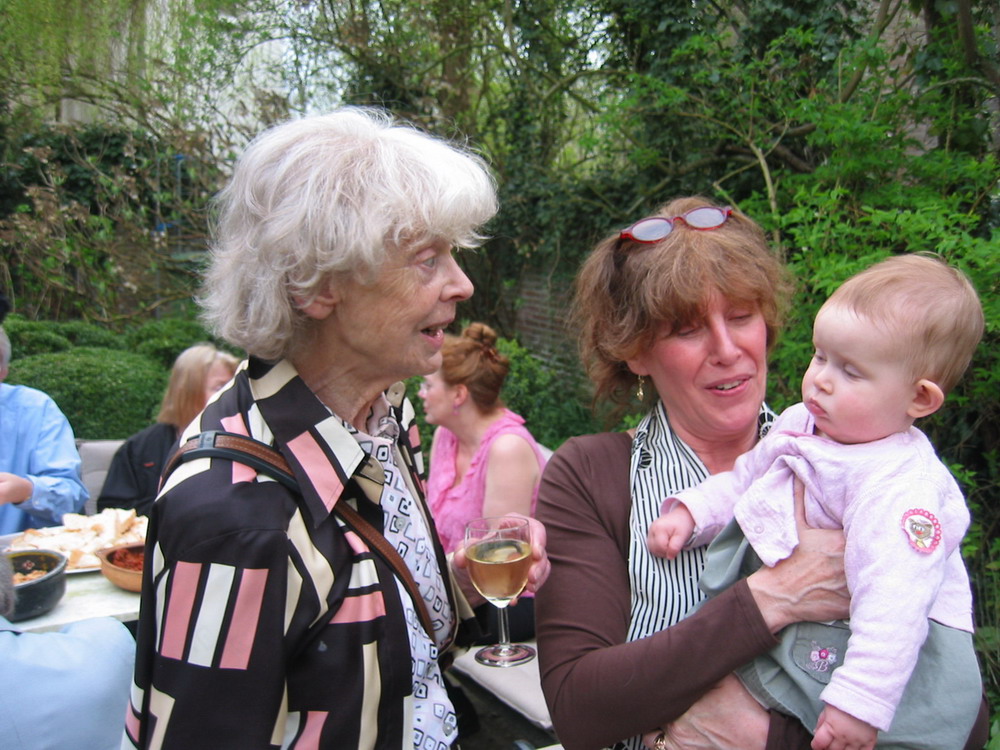 That day, April 3rd, was the nicest day of the year so far. The party started off in the garden at 6 p.m., and toward 8 p.m., as we began without much success to herd people into the house for the buffet, a quick, light rainshower did the job for us, stopping after it had done its work. I attribute this natural miracle to the doings of Tante Annie Maandag, a sorceress who until she died a quarter of a century ago lived across the street from the house in Utrecht where Loekie was born and bred. One of the most precious gifts Loekie received was Tante Annie’s powder puff, a white bakelite container complete with its original puff and the ladylike scent that brought Tante Annie back into our midst. Loekie received this from her oldest friend, Madeleine, who lived next door to Tante Annie. There were other friends as well Loekie has known for longer than half a century. I am blessed to have been taken up in her and their world – for forty years now, after all. It must be admitted that there is some disagreement among the witnesses as to whether Tante Annie thought I was good for Loekie. I am convinced she did, and think that she told this to me in so many words. Others have their doubts. I think they are overly influenced by Tante Annie’s perfectly justified complaints about my waking her up with my bromfiets, a low-gauge motorbike, when leaving Loekie’s house late at night or early in the morning. What they do not know is that when I found out about this I not only began parking my bromfiets around the corner and down the street but also that I apologized to Tante Annie, who eventually forgave me.