Theo Scholten (1927-2005) was a remarkable man, a legend in the world of business, finance and art collecting. He and his wife built a collection of modern sculpture, mainly by Dutch artists, that they donated to the city of The Hague as Museum Beelden aan Zee. Schwartz commemorates his gift as chairman of a committee to buy art for the city of Utrecht in the 1970s and ’80s. The column is followed by a notice on the death of Michael Montias.

I do not remember many chairmen of committees on which I have sat. Theo Scholten I remember. Upon the sad occasion of his death last week at the age of 78 the memories return. While others are commemorating him for his historical achievements in business and finance, as an art collector and founder of the museum Beelden aan Zee, I would like to eulogize him for a seldom praised quality, the perfect committee chairman.

The committee was the Utrecht Adviescommissie Beeldende Kunst, for the purchase, commission and placing of art – mainly sculpture in vandalproof granite, bronze or cor-ten steel – in public places. Scholten, who chaired the committee from 1973 to 1981, had a genius for the function. He had everything going for him. He and his wife had a major collection of contemporary sculpture, mainly Dutch, in their house and garden in Bilthoven. He was operating in the city that housed the company that made him rich, SHV, which had already given the world the legendary art collectors and patrons D.G. van Beuningen and various Fentener van Vlissingens. (Love of art tends to run in the firm.)

But that is not what left an impression on me. At those meetings I stood in awe of Scholten the leader. The man who kept a group of headstrong artists, architects and art historians and recalcitrant civil servants on track through high-powered three-hour meetings. Everyone got the chance to speak his piece on every decision and to benefit from the chairman’s questions asking him to clarify himself. Every artist coming before the committee, even those without the least chance of success for his proposal, was treated with genuine respect. We all had the feeling that we were discussing serious matters and that no one took them more seriously than the chairman.

Scholten did not wiggle away from conflict situations. He allowed them to occur and managed them so that even irate antagonists who lost out on the vote felt that justice had been done. Justice was most often the purchase of the kind of sculpture – semi-abstract, autonomous, in the mainstream of late modernism – in which Scholten believed.

Of the sculptures we bought for the city I remember most vividly the three monumental figures by Eugène Dodeigne that we chose in consultation with the artist in his studio outside Lille. In honor of Scholten I visited them today, granite giants in the trees, haunting the outskirts of the city.

Theo Scholten was gentlemanly and distant. He was not a sound-bite artist. The best quotable quote from our meetings belongs to the civil servant who shepherded the committee past the political pitfalls on our path, our own Sir Humphrey, Bernard Peiser. At our first meeting after the formation of a new town government, we asked anxiously about the alderman for culture to whom we would now be reporting. "He is responsive to reasoned argument," Peiser said, "and is therefore a weak manager." Theo Scholten, who listened to reason and was anything but a weak manager, gave the lie to this bon mot. Or did he?

This column is in danger of turning into an obituary section. No sooner had the above appreciation of a man I admired appeared in print than I heard of the death of someone I knew much better, for whom I had much deeper feelings and who was much more important in my professional life. Michael Montias, also John Michael Montias and Jean-Michel Montias, suffered for so long from a vicious cancer and dealt so well with it that I had begun to hope, against hope, that he was going to truck on indefinitely. He didn’t, but it is some comfort that, after years of treatment, he died peacefully in his sleep the night of Tuesday-Wednesday, 26-27 July. He was 77 years old. 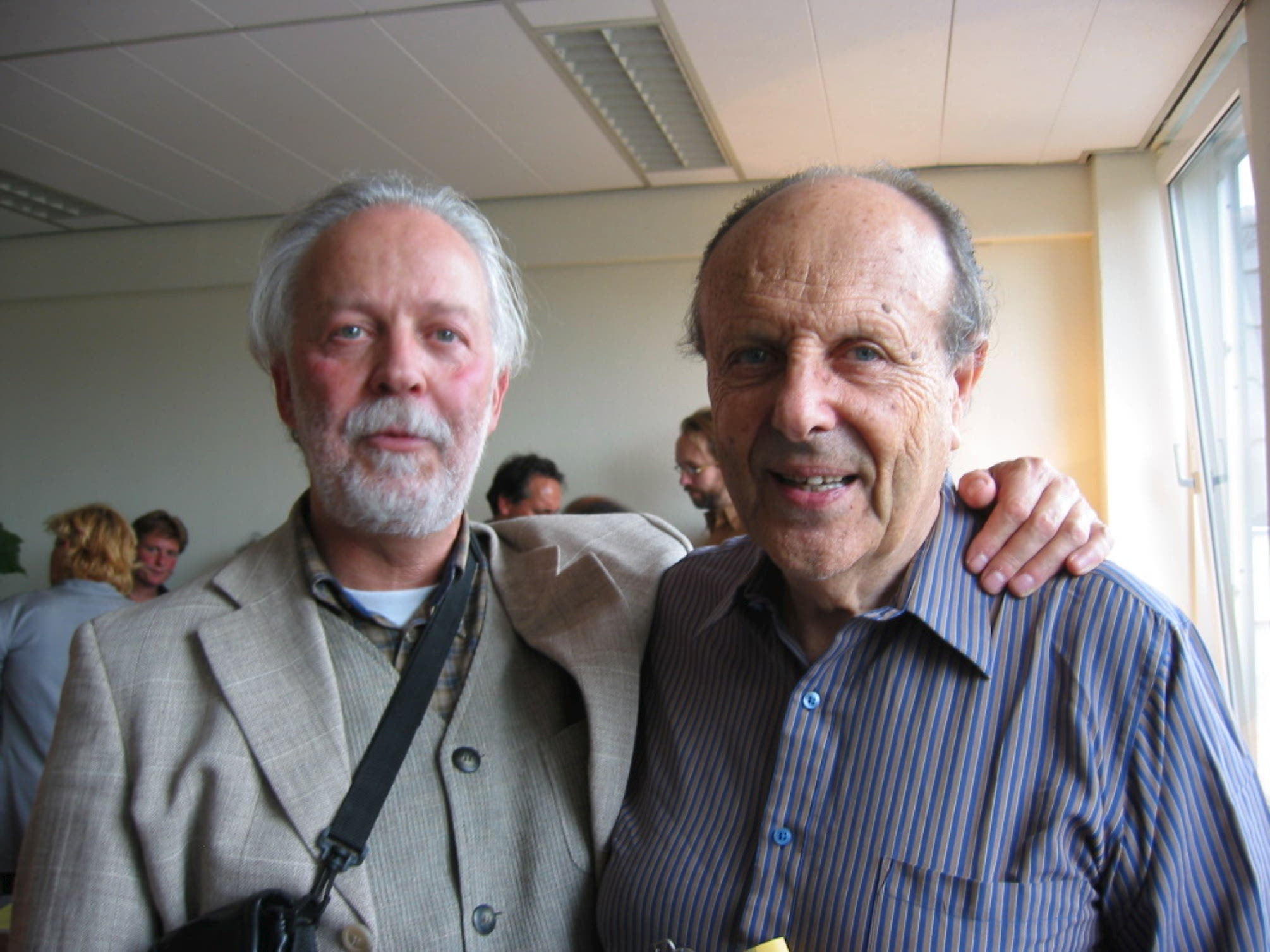 The author and Michael Montias at the launching party at Amsterdam University Press of Montias’s Art at auction in 17th-century Amsterdam, 10 September 2002. Photo: Christopher Brown

I have known Michael Montias since 1978, when I published his first article on the economic history of Dutch art. Our closest time together was the year we spent at the Getty Center for the History of Art and the Humanities in 1986-87, in the inspiring company of Jan de Vries, Ad van der Woude, Marten Jan Bok, Eddy de Jongh, Lyckle de Vries, Wim Smit and others. He was a warm and likeable man, generous to a fault with knowledge and ideas, marked by an endearing sensitivity, passion for his work, idealism and – strange to say of an economist – unworldliness. I cannot commemorate him properly right now. Instead, I have placed on this website the English versions of two articles that I wrote on his work on previous occasions. In them I attempt to do justice to his contribution while testing its outside limits. As of now, those limits have not yet been reached.

A further contribution of Montias to the field that is not mentioned in my articles are his transcriptions of some 20,000 inventories in the Amsterdam archives mentioning works of art. They are available for consultation at the Frick Art Reference Library (http://www.frick.org/html/montias.htm) and at the Rijksbureau voor Kunsthistorische Documentatie in The Hague.