In 1975 Derk Snoep published a classic study on the public ceremonies held in the Netherlands in the 16th and 17th centuries to welcome high guests. Because art of this kind has been out of favor among students of Dutch culture, his book has not received the attention it deserves. Schwartz nominates it, along with four other, more obviously influential Dutch contributions, for the non-existent Nobel Prize for art history.

The discussion of successful Dutch export products tends to bypass the field of art history. That is quite unjust. Over the past decades at least four major waves of influence that have washed over world art history rose in the Netherlands.
1. The study of hidden meanings in scenes of everyday life (Eddy de Jongh)
2. The use of infrared reflectography to make underdrawings visible (Dolf van Asperen de Boer)
3. The economic history of art (the honorary Dutchman Michael Montias, Ad van der Woude and Marten Jan Bok)
4. The magnified brand of connoisseurship practiced by the Rembrandt Research Project.
The impulses generated by these pioneers have changed the way of working of thousands of colleagues throughout the world. If there were a Nobel Prize for art history, these colleagues would be sitting beside their telephones this month. (Montias no longer, alas, who died three months ago.)

Today I would like to add another name to the list. The work concerned was published in 1975 and is therefore ripe for the Prize. It came out of the same think tank where Eddy de Jongh did some of his classic articles. That think tank was the Center for Art-History Research of Utrecht University, led by Prof. Jan van Gelder. 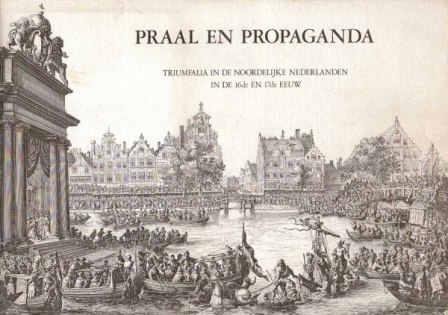 My nominee is Derk Snoep, who in the early 1970s shared a room at the Center with de Jongh. Snoep also dealt with symbolism in Dutch art, but in the opposite corner of the field. Rather than looking for disguised meanings in pictures of daily life, Snoep examined the undisguisedly symbolical and allegorical significance of pageants designed by regents for rulers. These were not the doings of everyday by everyman, but exceptional events in the lives of the high and mighty. His dissertation, Praal en propaganda: triumfalia in de noordelijke Nederlanden in de 16de en 17de eeuw, assembles and interprets all the known evidence pertaining to these triumphs, in a pioneering book of abiding value.

While admitting that this is a dark-horse nomination, I nonetheless think there is good reason for the Nobel committee to consider Praal en propaganda for the Prize. Aside from the excellence of its scholarship, there is also the intrinsic importance of the subject. In the eyes of the patrons and artists who created these triumphal entries, their work was immeasurably more profound and socially significant than the Pieter de Hoochs and Johannes Vermeers that are today invested with deeper meanings. It was also of evident international importance, raising the Dutch cities and the Republic to the level of the French and English royalty they received. Think only of the 1638 entry of Maria de’ Medici into Amsterdam, an event that marked the European coming of age of the great Dutch city-state.

By comparison with the effort put into these celebrations and the amounts paid for them, genre painting, considered the lowest form of art, pales into nothingness. This applies not only to the objects but also to the symbolism itself. Entire books were published, epic poems written to explicate the symbolism of the triumphal entries. Not a word was written in the 17th century to explain the meaning of genre art.

As a footnote to my recommendation, I therefore add the general question: to what extent should present-day (art) historians be expected to respect the explicit scale of values of the cultures they study?

Vols. 1-3 of the Corpus of Rembrandt paintings were brought out under the imprint Martinus Nijhoff. By 1982, when vol. 1 appeared, the venerable publisher of scholarly and scientific publications with that name no longer existed. In 1970 it was acquired by the conglomerate Wolters Kluwer and merged with a number of other Kluwer acquisitions in a division that came to be called Kluwer Academic Publishers. In a controversial move, in 2002 Wolters Kluwer sold this division, which in 2003, via a London equity fund, was merged with the scientific and scholarly imprints of Bertelsmann and Springer. The Corpus ended up as a publication of Springer, on the Architecture and Design list of an entity known as Springer Humanities. Excuse me if this simplification of an even more complicated story is not completely accurate in all points.

Last Wednesday, in the Mauritshuis, Joos Bruyn accepted from Springer Humanities the first copy of vol. 4 of the Corpus of Rembrandt paintings, 16 years after the appearance of vol. 3 and 49 years after Bob Haak conceived the notion of the Rembrandt Research Project. I wasn’t there, but the Dutch press reported the event as having transpired. This makes it something of a surprise to read on the Springer website http://www.springer-sbm.de/index.php?id=10474&backPID=121&L=0&tx_tnc_news=2076 the following: "[At the Frankfurt Book Fair] Springer also presents the Rembrandt Research Project, which has been analyzing Rembrandt’s works for almost forty years. Springer’s CEO Derk Haank will hand over the first copy of Volume IV, dedicated to Rembrandt’s self-portraits, to the author Ernst van de Wetering on October 20 at 12 midday."

It is good to see that the new publisher is entering into the fun-filled spirit of the Rembrandt Research Project.