I suppose we have to forgive Henk van Os, even though he should know better. In an Internet essay for the Royal Netherlands Academy of Arts and Sciences, he tells this tale: "Panic can sometimes give birth to something beautiful. In 1991 and 1992 the exhibition Rembrandt: the master and his workshop was held in Berlin, Amsterdam and London. That happened because in 1989 the director of the Gemäldegalerie in Berlin got into serious trouble. The scholars of the Rembrandt Research Project had de-attributed Rembrandt’s Man with the golden helmet, demoting it to the work of a pupil. What was even worse is that the colleagues of the Gemäldegalerie had declared that they agreed! They had not even made the effort to protect this icon of the Germanic collective spirit from the base researchers from Holland." 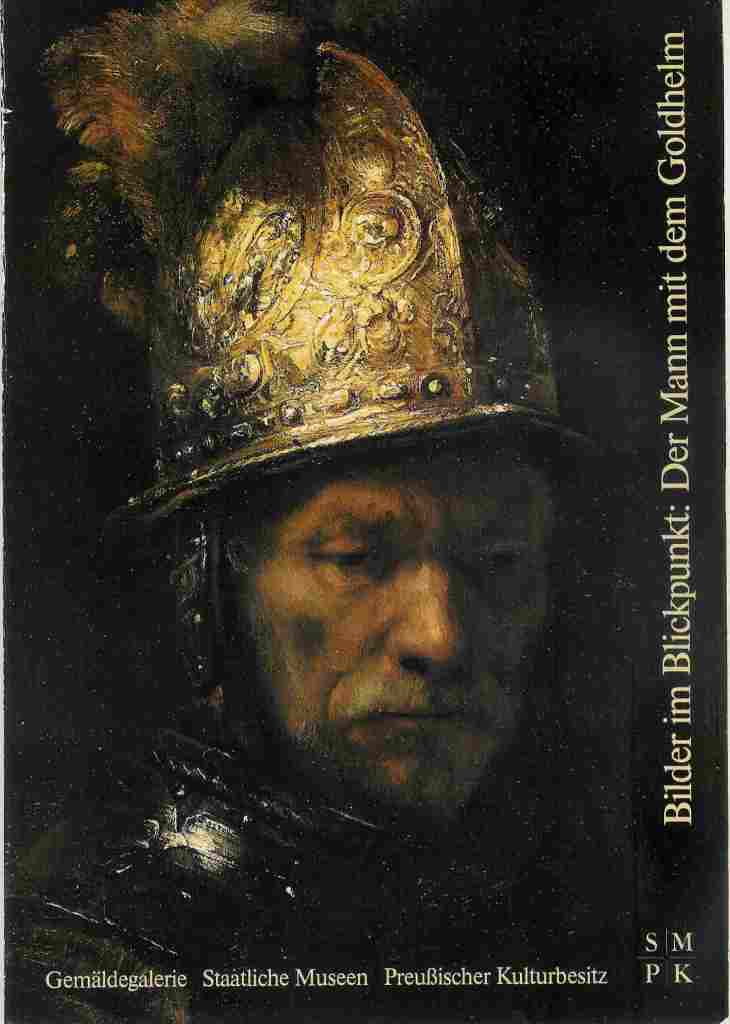 Cover of the brochure for exhibition in the Gemäldegalerie
Berlin 1986

Until mid-March 2006, the Man with the golden helmet
can be seen in the exhibition Rembrandt’s mother:
myth and reality in Stedelijk Museum De Lakenhal, Leiden.

The exhibition indeed took place and whether or not the director of the Gemäldegalerie had Rembrandt troubles I do not know. As for the rest of the passage – none of it is true. The label change dates from 1986, when the Gemäldegalerie held a small documentary exhibition, accompanied by a 48-page pamphlet, in which it espoused the opinion that its star painting was not by Rembrandt but emerged from his “Umkreis" (circle). Backing up this judgment was a solid analysis of the style, quality and physical make-up of the canvas. The director of the museum, Henning Bock, wrote a preface full of admiration for the curator behind this daring move, Jan Kelch. That the Gemäldegalerie took the initiative for the de-attribution was experienced by most of the Berlin public as a compliment to its intelligence and a mark of trust.

The first latter-day challenge to the attribution of the Man with the golden helmet was published by an unsung hero, the extraordinary American art historian, editor and art dealer Ben Rifkin. In the May 1969 issue of ArtNews, in a review of Horst Gerson’s book Rembrandt paintings, Rifkin expressed cogent doubts about Rembrandt’s authorship of the iconic picture in Berlin. Even though no one until then had allowed themselves even to think that heretical thought, once it was uttered it made sense. Several other paintings of the same type, apparently after the same model, had been removed from the Rembrandt corpus in preceding decades. Gerson agreed with Rifkin, as did other experts; Kelch names Christopher Brown, Christian Tümpel and Keith Roberts. Kelch also consulted the Rembrandt Research Project, and heard “kritische Bemerkungen" (critical remarks) from them. The RRP has never published an entry or as far as I know a single word on the painting.

The Rembrandt Research Project (RRP) is attended by powerful myths.
– The judgments of the Project concerning authenticity are backed up by irrefutable scientific evidence.
– Whenever a formerly accepted Rembrandt is de-attributed, the RRP is behind it.
– The RRP are fearless crusaders for the truth whose superior knowledge always carries the day.

None of this is true either, but the legend, generated by the RRP in its origins, is perpetuated by the press and the media. This is not only frustrating for colleagues, it is also disastrously harmful to the RRP. I’m sure that now that I have politely pointed out to Henk van Os and the Royal Netherlands Academy that they have unwittingly added their heavy authority to the myth, they will take appropriate corrective measures.

© 2006 Gary Schwartz. Published in Loekie Schwartz’s Dutch translation in Het Financieele Dagblad, Amsterdam, 28 January 2006. With thanks to Vesna Velkovrh Bukilica for contributing an improvement to the original English version.

Henk van Os was director of the Rijksmuseum at the time of the Rembrandt exhibition. He and the Royal Netherlands Academy for Arts and Science have agreed to correct the text of his paper on the Academy website two weeks from now, on Friday, 10 February. [P.S. The reference to the Rembrandt Research Project was indeed excised from the text, but as it now stands, the reader is not told who challenged Rembrandt’s authorship of the painting.]