The directors of two German museums have agreed to long-terms loans of large chunks of the Dutch and Flemish holdings of one (the Gemäldegalerie, Berlin) to the other (Suermondt-Ludwig-Museum, Aachen). This unusual arrangement was inspired by the network organization for museum curators of art from the Low Countries to which both directors belong, CODART.

Two recently appointed directors of German museums have made museum history. They have agreed to show large parts of the collection of one institution in the other. If this does not sound like a world-shaking event to you, you don’t work in or anywhere near a museum. Curators are married to their collections. To give up any part of them is as traumatic as the end of a marriage with children. The typical loan from one museum to another concerns a single work or small group of works that obviously belongs in the borrowing institution, matched by a major quid pro quo. Even then, such agreements are generally preceded by acrimonious internal debates as ugly as anything you might hear in a divorce court.

And so the deal struck voluntarily by Bernd Lindemann, director since June 2004 of the Gemäldegalerie in Berlin, and Peter van den Brink, since March 2005 director of the Suermondt-Ludwig-Museum in Aachen, was indeed historical. The Gemäldegalerie, like most large picture galleries, has more paintings of the Dutch and Flemish schools than of any other. By far the most are in the study collection or in storage, where they are not on show to the public. The Suermondt-Ludwig, located within biking distance of the Dutch and Belgian borders, has more than 200 Dutch and Flemish paintings, but in the course of the coming years they are coming off the walls for an extensive conservation campaign.

The new arrangement, which went into effect at the beginning of March 2006, goes like this. The two museums have drawn up a list of 100 Dutch and Flemish paintings from Berlin that are coming to Aachen in four batches of about 25 each, each batch to be on display in Aachen for four years before giving way to the next one. The benefit for Aachen is obvious. What Berlin gains is not only more exposure for part of its collection. The Bundesland Nordrhein-Westfalen is an important financial contributor to the Stiftung Preussischer Kulturbesitz, of which the Gemäldegalerie forms part. The loan arrangement is a way of reciprocating this support. 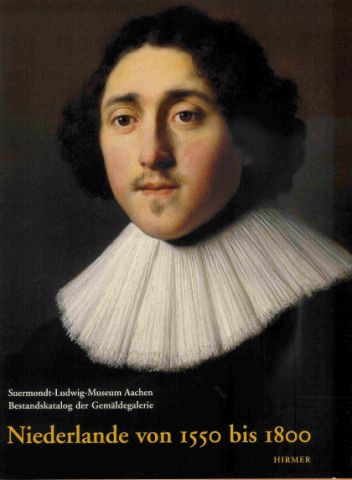 The two museums are moreover giving substance to a newly popular aim in the cultural field – collection mobility. The International Council of Museums, ICOM, has embraced this ideal and is encouraging museums to find ways to overcome the attendant problems: insurance, responsibility for conservation, protocols for loan to third parties, income from exploitation of rights, and the like. A Google search on “collection mobility" opens up a window on this new development in museology.

The German accord involves the Netherlands and Flanders in a different way than merely the origins of the paintings in the loan. Lindemann and van den Brink are both charter members of a young Dutch-Flemish organization called CODART. Since 1998, CODART has been bringing together museum curators of art from the Low Countries in the interests of cooperation of all kinds, including exchanges. Their deal was actually done behind the scenes at the CODART ACHT congress in Haarlem in 2005. A German-German museum exchange has been inspired directly and demonstrably by a Dutch-Flemish initiative. Europe is creeping up in nicer ways than the ones that we mostly read about in the papers these days. 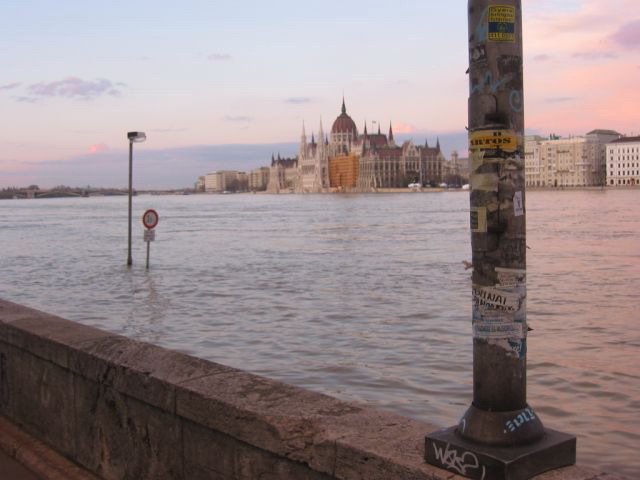 The Danube terrace in Buda, 2 April 2006. The traffic signs are on a road that was under water when the picture was taken. They say it happens not that infrequently in the spring, and that this year is not as bad as some others.

Our long weekend in Budapest was a pleasure. There were excellent, interested audiences at my two lectures on Rembrandt. I have been to Budapest four times, twice with my mother, who lived there until she was eight, and twice since her death. Because of her Hungarian background, visits there are always a more powerful experience than they would be otherwise. The printed announcement of my lecture at the Museum of Fine Arts described me as a “Dutch/Hungarian/American art historian." Even if not entirely defensible, it made me feel good.

Yesterday I spoke at the bi-annual meeting of a group of Dutch lawyers, notaries and government officials with an interest in cultural matters, Vereniging Kunst Cultuur Recht. Elaborating on Schwartzlist 251 (“The TEFAF Rembrandts") , I argued for the creation of a voluntary system that would register private ownership of art objects. The entire audience seemed to accept the proposition that completely anonymous ownership entails danger for the preservation of cultural heritage. They also agreed that draconic laws such as the Italian Cultural Property Law of 2004 were undesirable. The main objections to my proposal – one member of the audience called it an Art Possession Register, alongside the Art Loss Register – were that it formed an invasion of privacy and that it would be too large and costly to maintain. These issues can be overcome. The discussion encouraged me to take a following step, about which I will report when it takes place.