The indispensible Amsterdam archivist Bas Dudok van Heel, a friend for many years, finally got his Ph.D. Not all art historians were prepared to accept him as a colleague, despite his unending stream of publications on Dutch art and artists. Justice has been done with the award to him of a degree in art history. His dissertation is a collection of articles on Rembrandt, whom he places firmly in the camp of the dissident Remonstrant brotherhood.

The Radboud University in Nijmegen issues its doctoral bulls in large red tubes. I know this since May 31st, when in my presence one was handed over to the Amsterdam archivist Bas (also known as S.A.C., for Sebastien Abraham Corneille) Dudok van Heel, who held it up over his head in triumph as the crowd cheered.

Dudok van Heel is what the Japanese call a living national treasure. In the footsteps of his mentor Isabella H. van Eeghen, for 35 years he has published countless documents from the Amsterdam municipal archives bearing on artists, patrons, collectors, works of art and portrait identifications. She and he gathered what can be known about the guild of St. Luke, to which the artists belonged, the trade in art, newspaper advertisements of art sales, art-related locations in the city and much more. Their publications not only add context and color to our knowledge of art in Amsterdam, they also provide invaluable building blocks for reconstructing networks of patronage and the environment in which art flourished in the Dutch Golden Age.

Art historians have not always been sufficiently grateful for this flood of material and insight. As long as the archivist behaves like a handmaiden of the art historian, all is well. But Dudok van Heel, more than van Eeghen, sometimes goes further in his interpretations than suits the taste of some art historians. The Rembrandt Research Project in particular has shown a defensive reluctance to take Dudok van Heel seriously as a colleague. 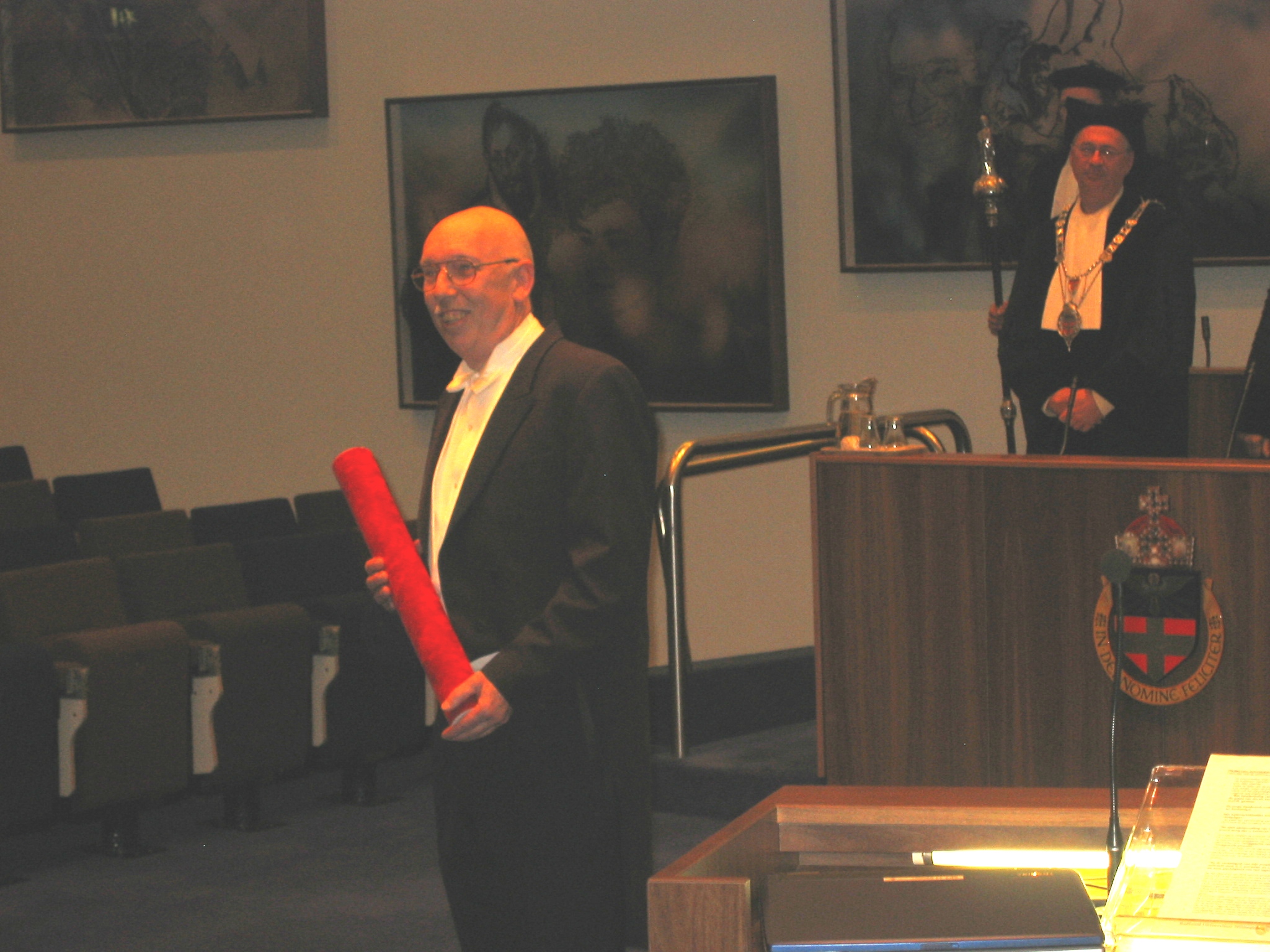 All credit then to Professor Volker Manuth of the Radboud University, who supervised Dudok van Heel’s doctorate – in art history. At the ceremony he described the promovendus in the guise that makes him a living international as well as national treasure. He is the one to whom foreign students in art history like Manuth (and me, around 1970) first turn for help in the Amsterdam archives. At such moments, he behaves like the booman at the gates. The student’s question is bound to reveal – worse, conceal! – profound ignorance of the archive and its documents, and Dudok van Heel takes the time to put the questioner firmly and unmercifully in his or her place. Those who survive this ordeal, digest its lessons and come back for more will find in the archivist a loyal helper for life.

The history of religion in Amsterdam is another realm dear to van Eeghen and Dudok van Heel; they tend to combine art and religion far more emphatically than art-historical students of the Golden Age. At a given moment they found themselves in polite denominational competition with regard to Rembrandt. Van Eeghen was more impressed by his Mennonite contacts, Dudok van Heel by the artist’s Catholic and especially Remonstrant connections. (Van Eeghen was born into a Mennonite family, Dudok van Heel into a Catholic one.) In his dissertation, he brings convincing evidence that Rembrandt deserves the appellation he gives him in the subtitle of chapter 4: “een remonstrantsgezind schilder uit calvinistisch Leiden." Juffrouw van Eeghen was not one to concede a fight easily, but I’m sure that were she still with us, she too would have been cheering for Bas.

© Gary Schwartz 2006. Published in Loekie Schwartz’s Dutch translation in Het Financieele Dagblad, Amsterdam, 10 June 2006. There a wrong date for the degree award was given, 2 June.

The appearance of Dudok van Heel’s dissertation took me by surprise. When I was a publisher in the 1970s and ’80s, I was eager to bring out his dissertation, which was then on a completely different topic, the Catholic patriciate of Amsterdam in the sixteenth century. All he needed was a one-year leave, and the manuscript would be ready. We didn’t get that year from his employer, the Amsterdam municipal archive, and the manuscript did not get finished. In the intervening years I believe I have heard of one or more other subjects on which Dudok van Heel was going to get his degree – a new, updated edition of J.E. Elias’s majestic volumes on the members of the Amsterdam town council was another – without the thing ever materializing. In contrast to many such cases, this is not because he had not done the work. He has. All of those projects are in his desk drawer, nearly ready to go. It’s the “nearly" that keeps doing him in. He always needs that year’s leave to put the finishing touches to his great compendia (which I believe have now melded into one monumental compendium, Catholic and Calvinist alike) of Amsterdam genealogy, social and religious history, heraldry and iconography.

These megaprojects did not keep Dudok van Heel from publishing an endless string of specialist articles in archive monthly and yearbook and other scholarly journals as well as essays to exhibition catalogues, especially on Rembrandt. He also had a nine-to-five job during these years.

Reading De jonge Rembrandt has been an extraordinary experience for me. When I wrote my biography of Rembrandt in 1984, I was powerfully impressed by Dudok van Heel’s ideas on the artist. Now he has repaid the compliment. My book serves him not only as a source but also as a heuristic device for combatting the judgments of colleagues with whom we disagree, sometimes on details, sometimes in fundamentals. I find myself put into play in opposition to, in alphabetical order,

Isabella van Eeghen (who failed to pick up the challenge of incorporating Rembrandt’s Remonstrant connections into his biography; p. 8)

Martin Kemp (for ridiculing the importance of documentary research; p. 11)

Michael Montias (who accused me of downplaying Rembrandt’s Reformed connections; p. 236; in this case I think Montias is right)

the Rembrandt Research Project (for wilfully dismissing evidence from the archives; p. 5 and brushing aside my support for the interpretation of the Leiden history painting as Palamedes before Agamemnon; p. 188)

Christopher White (for underusing documentary research and exercising inappropriate discretion with regard to unsavory information about Rembrandt; pp. 5-6).

Dudok van Heel also takes to task the reviewers of my book in Oud Holland – it was reviewed twice, once by an historian and once by an art historian – for not acknowledging that the book was an “important breakthrough" and failing to do justice to its better qualities (p. 5).

I am very pleased to play this role in De jonge Rembrandt and wish the book a bright and impressive future.