An exhibition of Rembrandt etchings, with a few drawings and paintings, in the National Museum of Art of Romania, is accompanied by a film of 1991 on the repair by the Dutch of two paintings damaged in the overthrow of Nicolae CeauÃ…Å¸escu in 1989. Another two were taken for restored and cleaned. Schwartz observes that basic facts about the painting cannot be seen with the naked eye. How can the museum visitor know when major interventions have been performed on a work of art? He can’t.

The Netherlands does not have a monopoly on Rembrandt 400. I’m sure my colleague Rembrandt specialists, like me, are also getting invitations to bring the Rembrandt message to farflung outposts abroad. To name only the cities beginning with an S where I have been invited: Seoul, Stockholm, Schwerin, Savannah and San Francisco. These visits are two-way tickets in more ways than one. I learn as much as I teach. 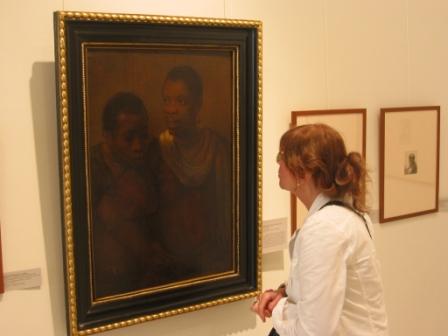 Loekie Schwartz examining a copy of Rembrandt’s Two blacks in the National Museum of Art of Romania in Bucharest, 17 June 2006

In Bucharest, where I spoke on June 16th, my lecture was linked to a well-attended exhibition of the Rembrandt etchings from the Romanian Academy and some Rembrandt school paintings in the National Museum of Art. The day after the lecture I returned to the museum for a more leisurely visit and was confronted with a gripping non-Rembrandt bond between the National Museum of Art of Romania and the Netherlands. In the space behind the exhibition rooms where I had spoken, a television monitor was now installed, showing a documentary made by Jeroen Visser in 1991 for Dutch television on the repair of four Netherlandish paintings in the museum. Two were damaged in 1989 during the fighting that accompanied the overthrow of dictator Nicolae Ceauşescu.

The first foreign museum colleagues to react to the disaster were the Dutch. The Romanians have never forgotten this, and still like to tell about it, as the screening of the documentary shows. Henk van Os, then director of the Rijksmuseum, came to Bucharest, and took back for repair two bullet-ridden 16th-century panels, an anonymous Mocking of Christ and a Calling of St. Matthew by Jan van Hemessen. Also included in the shipment were a large canvas of Haman prostrating himself before Esther that the museum hoped was by Rembrandt, and a portrait of a man they hoped was by Jan van Eyck. The Rijksmuseum wanted to help with the restoration of attributions as well as bullet holes.

The physical repairs, carried out in the Rijksmuseum and the Stichting Restauratie Atelier Limburg in Maastricht, were a dramatic, perhaps too dramatic success. An hour after watching the film, in front of the two restored panels themselves, I stared from all angles at the spots that I had just seen to be filled-in holes. For the life of me, I could see no seams or ridges dividing the 16th from the 20th-century sections, or differences in the quality of painting between restored and original areas.

Nor with the naked eye could I see the findings of the Rembrandt Research Project concerning the authorship of the Esther. They came to the same conclusion as other Rembrandt specialists, that little if anything on the surface of the painting can be attributed to Rembrandt. In X-rays, however, they detected an earlier version of the subject, with some features that they said might be by the master. I have a hard time imagining why anyone would have painted over a good Rembrandt of the 1630s with mediocre Rembrandtesque work in the 1650s, but strange things do happen.

One lesson I brought back from Bucharest, then, as from so many museum visits, is that the intense eyeballing of original works of art does not always reveal essential facts about them. More upsetting is that you don’t know when it does and when it doesn’t. When in doubt, ask the curator.

Excuses for the delay in the posting of Schwartzlist installments 257 and 258. This month I have given nine lectures on Rembrandt, most of them new texts, and I was too nervous about getting them right to interrupt myself for the Schwartzlist. Two of those lectures, at Utrecht University, were taped for an audio course on Rembrandt. In July they will be available for download or on CD-ROM with Home Academy.

This evening Loekie and I are going to the opera in Amsterdam, Rossini’s Il barbiere di Siviglia, and from there we are driving off to Germany for ten days in Hannover, Dresden, for a publishers’ conference, and then according to current plans Leipzig, Weimar and Kassel. When we get back the Rembrandt week begins, leading up to Rembrandt’s 400th birthday on 15 July. On Birthday Eve, Friday afternoon the 14th, I will present the first copy of the Dutch edition of my book on Rembrandt and of the audio course to the mayor of Amsterdam, Job Cohen. The evening before I will be appearing in a love television program on Rembrandt together with Rudi Fuchs, who has also written a new book on Rembrandt. Looking forward to that. To it all.