The antiquarian book trade is a conduit for treasures of the kind that Schwartz loves. It is practiced at a high international level in the Netherlands, primarily by a single firm, Forum. The owner, Bas Hesselink, regrets that nearly all of his best books are sold abroad. Schwartz also commemorates his late friend Wim Smit.

The best copies of the best antiquarian books come from Holland. In a farm outside the village of ‘t Goy in the municipality of Houten lies Antiquariaat Forum, with an unequaled offering of old imprints. It’s a place where I can easily imagine spending the rest of my life, in the intellectual, scholarly, technical and artistic company not only of the famous great minds of the past, but of lots of fascinating characters of whom I have never heard. Of course there are libraries that are richer, but in Forum there is a constant stream of new titles with an unpredictable mix. And you can buy the books.

Forum is the creation of Sebastiaan S. Hesselink, an alumnus of the great postwar Dutch school of antiquarian bookselling, masters like Hans Gumbert and Edgar Franco of Beijers’ auctioneers in Utrecht, Max Elte in The Hague and Nico Israel in Amsterdam. Like them, Hesselink is a living encyclopedia of information about authors and titles in the entire range of subjects covered by the printed book. Booksellers have to know things about old books that most academic scholars do not: which editions are rare and which are common, which faults and which extras to look for in a particular printing, the quality of paper and impression, where repairs have been carried out. The best of them also know their own limits and how to compensate for them by hiring specialist knowledge that they do not have the time to acquire.

The Netherlands is fortunate that the older generation of antiquarian booksellers has been survived by a firm that is carrying on the tradition at the highest level. With the expert help of Koert van der Horst, retired librarian of the Utrecht University Library, Bas Hesselink and his son Laurens produce title descriptions of exceptional quality. Their catalogues and website, for those who do not camp out in ‘t Goy, are unfailingly fascinating in themselves. A tour d’horizon of the international world of the antiquarian book shows Forum as one of the few peaks towering above the rest.

My own relationship with Forum, aside from thirty years of friendship with Bas and Koert, consists mainly of regrets. Regret that I do not spend more time at Forum and also regrets at lost chances. One book that stands out in memory is a unique copy of Karel van Mander’s Schilder-boeck, the most important source we have for the history of early Dutch art. About twenty years ago, Bas showed me a copy of the first edition (1604) that was not only perfectly printed and in excellent condition, but was also enriched with extra plates. It was shot through with portrait prints from various sources, adding not only visual but also historical interest to the book. The additions, some of them quite rare, dated from shortly after publication date. This is the kind of item for which Forum is famous.

At the time, I foolishly thought that I could not afford to buy that Schilder-boeck. Had I done so, it would have gone down in history, and me with it, as the Schwartz copy. As it is, the book went to New York, to my senior colleague Egbert Haverkamp-Begemann, and will therefore be known as the Haverkamp-Begemann copy. This illustrates an unfortunate truth about the antiquarian book trade today. The best copies of the best books may come from Holland, but they do not stay here.

About four years ago I bought another, good but lesser copy of the Schilder-boeck at auction in Haarlem. Since then, a wonderful digital edition has been published on the Digitale Bibliotheek voor de Nederlandse Letteren, complete with a facsimile of the 1604 edition: http://www.dbnl.nl/tekst/mand001schi01_01/. The DBNL is the kind of resource you could only dream about as recently as ten years ago. However, I would have bought the printed copy even it had been available at the time of the Haarlem auction.

A week after the launching of the Dutch edition of my Rembrandt book in the Rijksmuseum, Loekie and I drove to Schleswig, where I opened an exhibition of Rembrandt etchings at Schloss Gottorf. Half an hour after we arrived we got a call from Holland. It was the son of an old friend, saying that his father had died. We cut our trip short to come back for the cremation and memorial service. 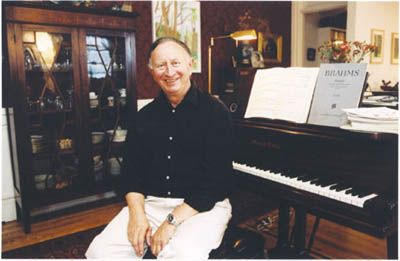 Photo of Wim Smit at the piano, from the website of Columbia College Today, where it bears this caption: "J.W. Smit, Queen Wilhelmina Professor of History, is the only person to teach all four of the basic Core courses: Contemporary Civilization, Literature Humanities, Art Humanities and Music Humanities. (Photo: Michael Dames)"

Wim Smit may have answered to the title Queen Wilhelmina Professor of the History of the Low Countries at Columbia University, but knowing him as I did outside his academic environment I found it difficult to imagine him there. His personality seemed so much stronger than any conceivable function, his desires so resistant to the demands of any job. All he ever seemed to want to do was to play the piano, run in the woods, cook for friends and eat and drink with them, make conversation, be a loving son to his parents and a patriarch to the children of his two marriages. Before the death of his wife Pam seven years ago, add to that: engage with – that is, try to keep up with – the mercurial Pam. Nor did his status ever seem to depend on a function. He had innate authority. You listened to him respectfully on any subject; he always seemed to be speaking from first-hand knowledge or thought, never from the books and certainly not through appeal to any else’s opinion. He had an original yet surprisingly convincing take of his own on most things. You came to Wim to have your mind changed.

As I found out at the memorial service, from former students of his in Utrecht and Columbia and from his children, there was no break between his behavior inside and outside the classroom. He brought his natural manner to the academy, treating his students to his conversation the same way he beguiled his friends. An important part of his appeal lay in his voice itself. I had never thought of that, but I realized at once how true it was when his daughter Marijke said at the memorial that even over the transatlantic telephone his voice sounded like audible chocolate. Unfortunately for the rest of the world who were not his children, friends or students, Wim did not feel that publishing was important for the scholarly life, at least not his life as a scholar. His conversation included chunks from mental books about Dutch history, world affairs, art and music that will always remain unwritten. This suited his temperament, which combined a demanding professional and private life with principled dedication to the motto dolce far niente.

Wim was born in Utrecht and left there for New York in 1965. I was born in New York and left for Utrecht in 1965. His and Pam’s son and daughter are about the same age as ours. After we met by chance in the mid-1970s, first at the wedding of our mutual friends Petra ten Doesschate and Fen-Dow Chu and then at a pancake restaurant in Rhenen, near their summer home in Bennekom, the eight of us saw each other nearly every year. These hours together had a timeless quality thanks to Wim’s capacity to make you feel he was doing only what he most wanted to do at that moment, with no feeling of obligation. Since that cannot be literally true, what it amounts to is a variation on the Stephen Stills lyric: if you can’t do the thing you love, love the thing you do. In contrast to the original Stills sentiment, that is a gift to envy and emulate.

At the beginning of August the Dutch radio news said that the heat of July, with the highest average temperature ever recorded, was held responsible for a considerable number of deaths. Wim, who despite overweight and cholesterol and high blood pressure was a pretty healthy 75, was one of those extranumerary victims. A victim of a lumbering natural disaster, a climatological Pompeii in slow motion. A topic on which I will never hear him discourse.

Please whitelist schwartzlist@garyschwartzarthistorian.nl in your Internet browser and spam filter.