Traveling in countries where you don’t speak the language limits your possibilities. But Schwartz is anything but sorry that he spent a week in Hanoi in October 2006. He made the acquaintance there of the artistic explorer Rienke Enghardt, who collaborates with colleagues all over the world. Schwartz daydreams about the possibilities for scholarly adventures of that kind. 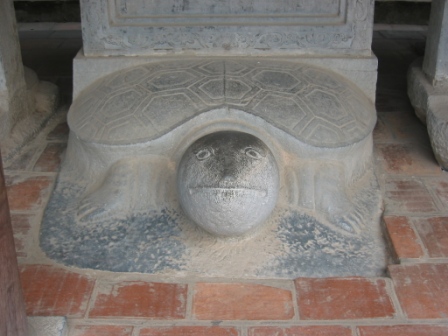 Hanoi, Temple of Literature, founded in 1070. The base of one of one of the 82 steles commemorating the award of a doctorate, a series commenced in 1484. If they were doing that at Johns Hopkins in the 1960s I am sure I would have completed my Ph.D.

Every time I travel in a country where I don’t speak the language I remember that the last time I did I promised myself not to do it again. It diminishes you and many of the people you deal with to a semi-infantile state. You cannot freely choose places to visit and things to do; your comings and goings have been settled for you before you left home by tourist boards via a form of predestination.

It’s a good thing that I didn’t remember this resolution when my wife and I put a full week in Hanoi onto our around-the-world plane ticket. Not that we learned any Vietnamese in that week, but we nonetheless got to see at least one non-tourist attraction that made a deep impression. It was the opening of a double exhibition, “Connection,” at the Art Vietnam Gallery. The older of the two artists was the Vietnamese Tran Trung Tin. A number of his abstract gouaches on newspaper from the 1970s, lyrical and frightening at the same time, were chosen by the younger artist for the joint show. The younger artist was an admirable Dutch woman named Rienke Enghardt.

Enghardt, who travels constantly in Asia, Oceania and Africa as well as Europe and America, does not suffer from tourist predestination. She takes the time and has the energy to define her own destinations. Wherever she goes, she makes contact with local artists and enlists them as co-authors of her work. She travels with what she calls a Hope Box, with space for creations and collaborations of various kinds. At Art Vietnam she showed some of her Weather Reports. These are composites of dismembered drawings by Enghardt that she cuts into four pieces and sends to four different colleagues. Each completes the fragment and returns it to Enghardt, who then assembles a new work from the pieces. These joint creations belong to all five artists and are not offered for sale. Enghardt wants to complete 150 of them before she stops. (However, on an old website of the Gate Foundation, I found the statement that she was going to end the project in 1994 or 1995. See also a report on the exhibition by Joe Fyfe.)

There were personal and professional as well as touristic reasons for our visit. It was the last stop on a five-week trip in which I gave eight lectures on Rembrandt in six cities. The lecture in Hanoi, like those in Seoul (Persoonlijk, 22 oktober), was organized by the Dutch embassy. It was held at the Fine Arts University, a less academic and more artistic environment than the university at which I spoke in Seoul. Again, the hall was packed with students and staff. (In Hanoi, there was also a strong representation of expats.) The Vietnamese listeners asked good questions after the lecture and even challenged me when they were not satisfied with the answers. This is not what I was expecting, and I found it thrilling. I left Asia exhausted but with the satisfied feeling that what I had told my audiences there increased their knowledge about Rembrandt and Holland in far greater measure than would have been achieved by the same lecture given to a European audience.

A better traveler than I will have to take up the challenge, but I think that an itinerant art historian, an academic Rienke Enghardt, could do wonderful work in setting up joint research projects with colleagues in underdeveloped countries. You would move independently, with and without the cooperation of institutions and governments. And you would subvert intellectual as well as journey predestination. 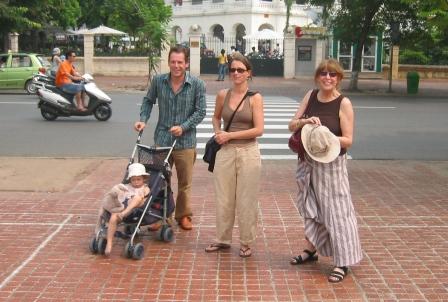 Before being invited to lecture in Hanoi, Loekie and I had arranged to travel there to meet our son, his lady and their daughter, who spent half a year in Southeast Asia. Here they are, with Loekie, on one of the more distinguished streets of the city.

No use trying to bring you up to date or even catch up with myself. Since returning from Vietnam one month ago (it’s now 26 November), I have been to Germany for a Rembrandt congress in Berlin and a lecture on him in Braunschweig, opened the exhibition The “Jewish” Rembrandt in the Jewish Historical Museum in Amsterdam, and visited Malta for Rembrandt lectures in the National Museum of Art and the University of Malta, followed by the annual Catharina Lecture in MuseumgoudA in Gouda. From 5 to 10 December Loekie and I will be in Istanbul, where on the 7th I talk on the big R. at the Pera Museum. I figure this will happen only once in my life, so why not go with it?

There is only one thing that I cannot not publish here. At the Berlin conference Rembrandt: Wissenschaft auf der Suche I delivered the ceremonial address at the Freie Universität on the evening of 4 November. I prefaced it with these words:

“Any Rembrandt specialist speaking on the master in this city is bound to be overwhelmed by memories. In my case the memory that means the most to me is that of my teacher in Rembrandt and greatly missed older friend, Horst Gerson, who was born here. Gerson did part of his studies in Berlin, working as a student in the art dealership of his uncle Karl Lilienfeld. When he was still in his twenties he moved to the Netherlands, where he became one of the central figures in Dutch art history and international Rembrandt studies. He was a shining example of humanity and openness in the profession of scholarship. Although he lived in the Netherlands for nearly fifty years, whenever Gerson opened his mouth to speak, in whatever language, what came out, in accent, in big-city smarts and in brash humor, was pure Berlin. With great fondness I dedicate this lecture to his memory.”