The idea that Rembrandt was sympathetic to Jews and Judaism is so generally accepted that it is seldom questioned critically. One of the pillars of this supposition is the identification of many portrait sitters and models as Jews. Hardly any of these can however stand up to scrutiny.

In 1630 the prince of Orange owned a painting by Rembrandt’s friend and competitor Jan Lievens of “a so-called Turkish potentate,” of which the prince’s secretary, Constantijn Huygens, wrote that it was “done from the head of some Dutchman.” This dry comment by someone who knew Lievens well has since been swamped by the juicy opinions of uninformed sources who saw Turks, Persians, Poles, Slavs, Orientals and other exotic human varieties in numerous works by Rembrandt as well as Lievens. None of these ethnic designations has been at all as successful, however, as Rembrandt’s Jews, who have captured a niche of their own in western culture.

Only one existing Rembrandt portrait and the etching after it are fairly certain to depict a Jew: the Amsterdam physician Ephraim Bueno. Not long after they were made, Bueno however ordered another etched portrait of himself, this time from Jan Lievens, which seems to have displaced Rembrandt’s version as the doctor’s calling card. There is also a documented but unidentified portrait by Rembrandt of a young, presumably Jewish woman, which is documented because the Sephardi Jew who commissioned it refused to accept it, saying that it didn’t look in the least like the sitter. Rembrandt’s presumed portrait of Rabbi Menasseh ben Israel is no longer thought to depict that grand personality.

This unpromising start did not stand in the way of a spectacular growth after the artist’s death in the number of Rembrandts (and quasi-Rembrandts) that are said to show Amsterdam Jews. A high point with regard to the paintings was reached in 1935 in Abraham Bredius’s catalogue. No fewer than 36 unidentified heads are called Jews, young and old, merchants, scholars, rabbis. Allowing ourselves a bit of racial profiling – hooked nose, dark eyes and hair, swarthy complexion, thick lips – we can say that two of these paintings, which are not portraits, look like stereotypical Ashkenazi Jews. None of the features commonly cited as evidence for the Jewishness of other models – skullcaps, long beards, prayer shawls (none really are that), melancholy expression – stand up to scrutiny. “Some Dutchman” dressed up by Rembrandt in nondescript old clothes is more likely to have been the model than a Jew. Bredius’s Jews are not only in shaky possession of Jewishness. They have also turned out to be particularly vulnerable to de-Rembrandtization. Fewer than 10 are still accepted as work by the master. 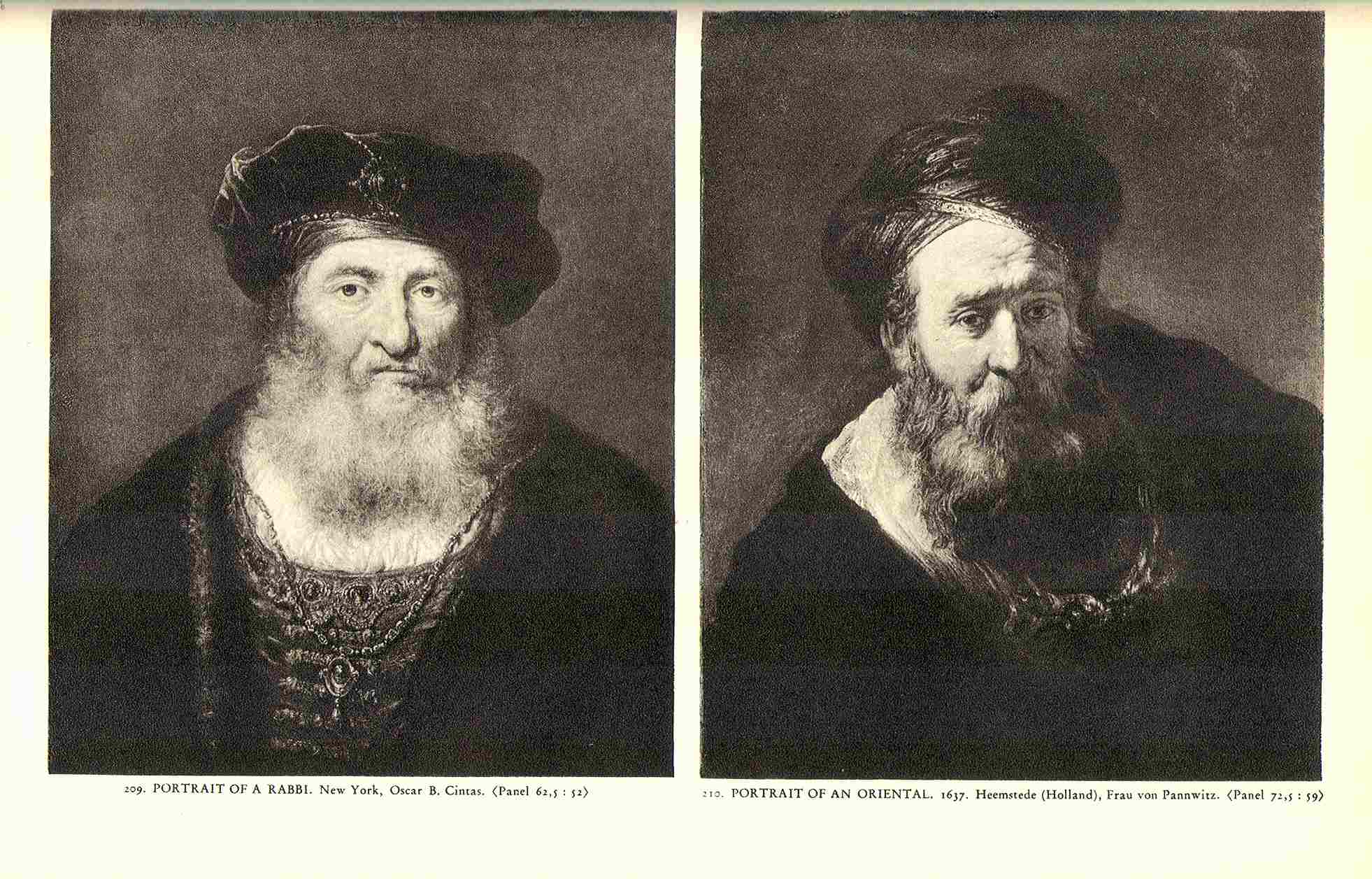 Nr. 209 in Bredius’s catalogue (left) is “Portrait of a rabbi,” nr. 210 (right) a “Portrait of an Oriental.” Neither is currently considered to have been painted by Rembrandt.

One intriguing aspect of Bredius’s Jews is that they are all males. He sees Jewish men everywhere, but nowhere a woman. Not even in the Rijksmuseum painting called The Jewish bride, which Bredius names Portrait of a married couple. I must admit to being at a loss even for a wild guess at the reasons for this. Could Bredius’s homosexuality have anything to do with it? There are murky waters here, certainly for a book that appeared in the year of the Nazi Nürnberg laws, when identification as a Jew took on greater significance than ever before in modern European history.

The presumed manifestations of Judaism in Rembrandt’s art and life are the subject of a sparkling, revolutionary new exhibition in the Jewish Historical Museum in Amsterdam, The “Jewish” Rembrandt. The show and its accompanying book, by Mirjam Alexander-Knotter, Jasper Hilliger and Edward van Voolen, question the nearly universally accepted assumption that Rembrandt, exceptionally for his time, was a friend of the Jews. The authors go through all the evidence and come up consistently with refreshingly debunking conclusions, which I completely share.

This subject kept coming up in the writing of my book on Rembrandt. In March I published advance warning of the tack I was going to take, in a column entitled The third poem. I was expecting protest, even outrage, but to my surprise nearly all of the responses were positive. I had the feeling that this was an idea whose time had come. I think that a lot of people have been wondering in the back of their minds whether Rembrandt was really a friend of the Jews. Without realizing it, people were waiting for someone to say that he wasn’t.

The curators of the Jewish Historical Museum in Amsterdam had in fact come to the same conclusion in their work on the exhibition. (For the record: the idea to do an exhibition in the Jewish Historical Museum on Rembrandt and the Jews in 2006 was first broached by me to the previous director, Rivka Weiss-Blok, on 2 August 2001. The plan was approved, but as things worked out I was unable to take on the function of organizing curator. The ball was picked up by Edward van Voolen, with the collaboration, later on, of Mirjam Alexander. I remained on the advisory board and was asked to hold the opening speech for the exhibition, which the museum has put on Internet in Dutch, English and Hebrew.

When I was invited to speak at the Rembrandt symposium in Berlin on 4-5 November 2006 I chose this subject. Because an important part of the demonstration concerns the Hebrew in Rembrandt’s paintings and etchings, and because Mirjam Alexander had written an excellent thesis on the subject, I asked the organizers if we could speak as a duo. They agreed, and so, on 4 November, we gave a joint talk under the title “Rembrandt’s Hebrew, Rembrandt’s Hebrews,” with Mirjam doing the first half and I the second. There too, I am pleased to say, the argument that Rembrandt was no more a friend of the Jews than his Christian contemporaries was widely accepted.