An Australian-Dutch art historian who lives on Malta has produced a classic edition of one of the great cultural monuments of the island. Dane Munro’s book on the tombstone inscriptions of the Hospitaller knights of St. John is a book that transports you into another world – no, two other worlds. 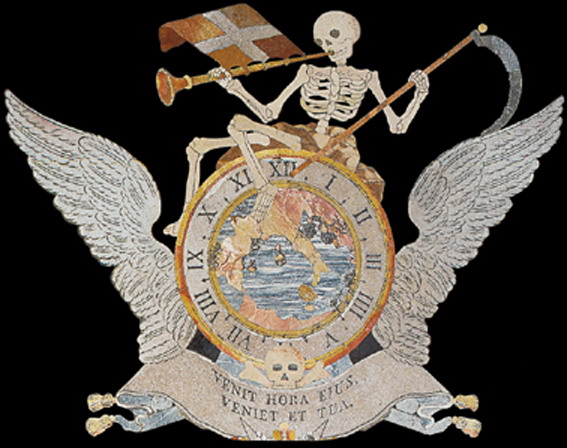 Emblem on the tombstone of Don Gaspar de Figuera.
(For complete tombstone and inscription, see below.)

The last thing I expected, being introduced in Valletta to an Australian art historian named Dane Munro, is that the man would speak perfect Dutch. As it turned out, he was nearly a native speaker, having a Dutch mother and having been raised partly in the Netherlands. Although he has been living on Malta since 1993, he has maintained ties to the Netherlands. He is working on a doctorate at Groningen University.

That Ph.D. was the second and greater surprise of our acquaintance. Munro has taken on one of the most (of the many) astonishing monuments of Maltese art and history and studied it as no one studied it before. The Co-Cathedral of St. John in Valletta contains 407 splendidly adorned memorial inscriptions in its polychrome marble inlaid floor and sepulchral monuments. They commemorate grand masters and knights of the Sovereign Military and Hospitaller Order of St. John of Jerusalem, of Rhodes and of Malta. The order had been given the tiny but supremely defensible Maltese archipelago by Emperor Charles V in 1539 after the Ottomans had driven them out of Rhodes. (Before that Moslem enemies had expelled them from Acre and Tripoli and Rhodes.) The order remained there until it ceded Malta to Napoleon in 1798.

For 250 years the more vain Hospitallers lived to be buried in that church, to be remembered with dignity and honor. They or their confrères would write a Latin inscription recording their titles, career and glorious deeds and praising their piety and better characteristics, ending with the date and sometimes the circumstances of their death. The Maltese liked to say that the Latin of the inscriptions was too subtle to be translated. Munro did not agree, and he undertook graduate study of Neolatin to prove it.

The inscriptions, which can now be read by non-Latinists for the first time, in Munro’s English translation, are capsule biographies with literary quality and often a personal touch. The passerby is sometimes addressed, as in the epitaph of François de Vion Thesancourt (329; died 14 October 1649 of “an intestinal disease, short but intensely vile”… Bend down with your lighted candles, whoever you are, and acknowledge your mortality.”

These thoughts would be framed elaborately in compositions of inlaid marble. Each of them is a unique combination drawn from about 100 different motifs. The knights preferred emblematic and allegorical allusions to glory and death. They were out to prolong their reputations on earth until Christ conquered Death and brought the pious dead back to eternal life.

The biggest surprise was that Munro’s work has been published, without subsidy, in one of the most magnificently illustrated art books I have ever seen. The outstanding Italian photographer Maurizio Urso made breathtaking pictures of the monuments. All of them, not just a selection, are reproduced scrupulously and tastefully in color in Memento mori: a companion to the most beautiful floor in the world. The publishers who financed the extraordinary two-volume boxed set, Joseph Bartolo and Mario Mintoff of MJ Publications, have as their normal production a line of guidebooks, postcards and slides. They brought out this book because, like Munro, they were enchanted by the floor.

Whoever you are, reader, you too, without bending over with a candle, can now savor and understand this collective masterpiece. It will indeed remind you of your mortality, but the knights thought that was a good thing. 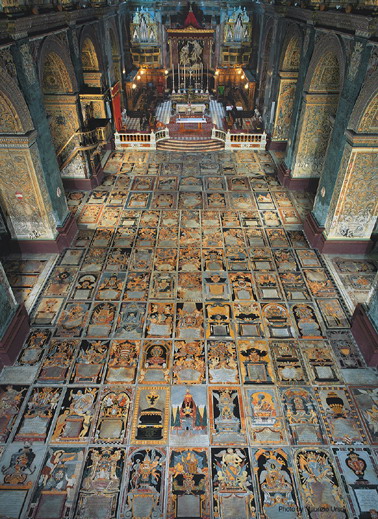 The inscription on the grave of Don Gaspar, in its touching mixture of dryness and emotion, is a lovely example of the genre: 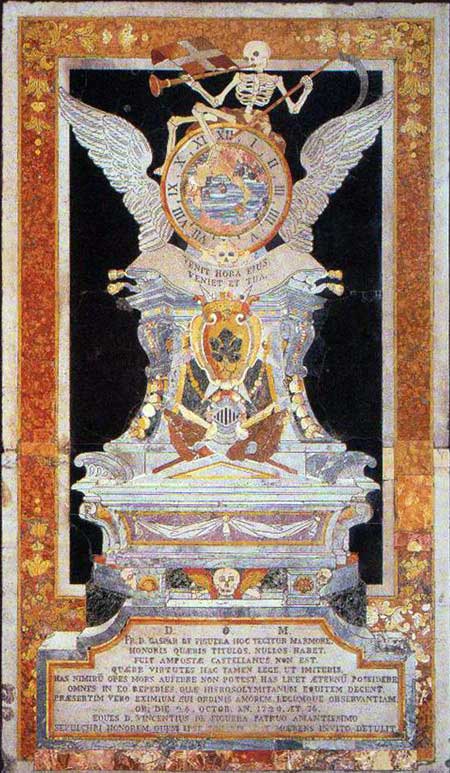 His hour has come,
and yours will come.
———
To God, Supreme and Almighty.
Fr. Don Gaspar de Figuera is covered by this marble.
You are seeking his titles of honour, he has none.
He was the Castellan of Amposta, now he is no longer.
Look for his virtues, better still, read so that you may emulate them,
without doubt Death cannot carry away these strengths,
which ought to be preserved all in him forever.
You will discover which are the ones suitable for a Jerusalemite Knight,
especially the extraordinary love for one’s Order
and the observance of [its] laws.
He died on the 24th day of October in the year 1729, at the age of 76.
Chevalier Don Vincente de Figuera, in almost unbearable grief,
bestowed upon his most beloved uncle
the honour of a tombstone, which he had denied for himself.

Loekie and I knew one Knight of Malta. His name was Venceslao (Venda) Dobrzensky, not only a knight but also a prince of a man. If he was typical of the knights, we mourn for them all.