“Our predecessors did the best they could, but they did not have our superior knowledge of restoration science and technique, so they did more harm than good to the objects they treated.” This left-handed excuse for the irresponsibility of one’s colleagues in the past is a mantra of the profession of art restorer. Without challenging the desirability of some restoration, Schwartz takes objection to the pretence that it does not harm art objects and to the faulty logic of the excuse.

The following reports from the most recent issues of two very different periodicals, a Turkish glossy and a Dutch civil-service newsletter, bring the same disquieting message. Not as shocking, perhaps, as An inconvenient truth, but for art collectors worse, because it lays the responsibility for fateful decisions irrevocably at their feet. The message? Art restoration is full of unsuspected risk.

From Cornucopia: Turkey for connoisseurs, which must be the best magazine of its sort I have ever seen, the following passage from an article by the architectural historian Robert Ousterhout on the restoration of the Zeyrek Mosque in Istanbul: “The most difficult part of our restoration was undoing the previous restoration… At the Zeyrek Camii, the restoration of 1966 had replaced the lead sheeting with a faux-lead roof of reinforced concrete, with a regular system of ridges to imitate the folded joints. Not surprisingly, it cracked and leaked and caused a great deal of damage.”

While the roof of the Zeyrek Camii was doing its cracking and leaking, in Arnhem, on the other end of Europe, an acrylic painting on paper was deteriorating in its own dry way. What followed is described in the newsletter (Nieuwsbrief ICN) of the Netherlands Institute for Cultural Heritage: “A large acrylic painting on paper was treated locally with hydrogen peroxide to remove stains. The choice of hydrogen peroxide and the manner of applying it were based on good experiences over a long period of time. Three months later the owner called: in the treated areas a million brown spots had appeared that seemed to be growing darker and darker.”

The only unusual thing about these reports is that they concern very recent restorations. Otherwise, they are a disturbingly standard staple of restoration reports. “Our predecessors did the best they could with the knowledge available to them at the time. They were perfectly conscientious, but since they did not have our advanced knowledge their intervention caused more harm than good.” Conservation scientists or restorers or curators or museum directors who write sentences such as the preceding are in fact not being as conscientious as they should be. They should realize that they are merely stepping into the shoes of those relatively ignorant predecessors. The truth is that there is no way of knowing whether a restoration will lead to unintended consequences.

For decades, the American art historian James Beck has been railing against the false pretences attending art restoration. He has powerful arguments. For example, practitioners of restoration have raised the principle of “reversibility” to sacrosanct status. If the procedures followed by the restorer can be undone at a later date, it is said, then even present-day ignorance is no reason not to perform a restoration. Beck points out with incontrovertible logic that reversibility “is only applicable to the second stage of the normal restorative process: the stage following the repairs and cleaning of the surface. The actions taken during this first stage are never reversible, since they all involve the process of (permanent) removal of certain materials or substances.” (See www.artwatchinternational.org.)

Perhaps things are changing in Beck’s direction. The newsletter of the Netherlands Institute for Cultural Heritage now writes: “In the profession of restoration risks … can never be entirely eliminated.” Yet, even this seemingly forthcoming statement distorts the real situation. The reality is that every intervention in an object entails risks. Make sure your restorer tells you about them and takes steps to minimize them. 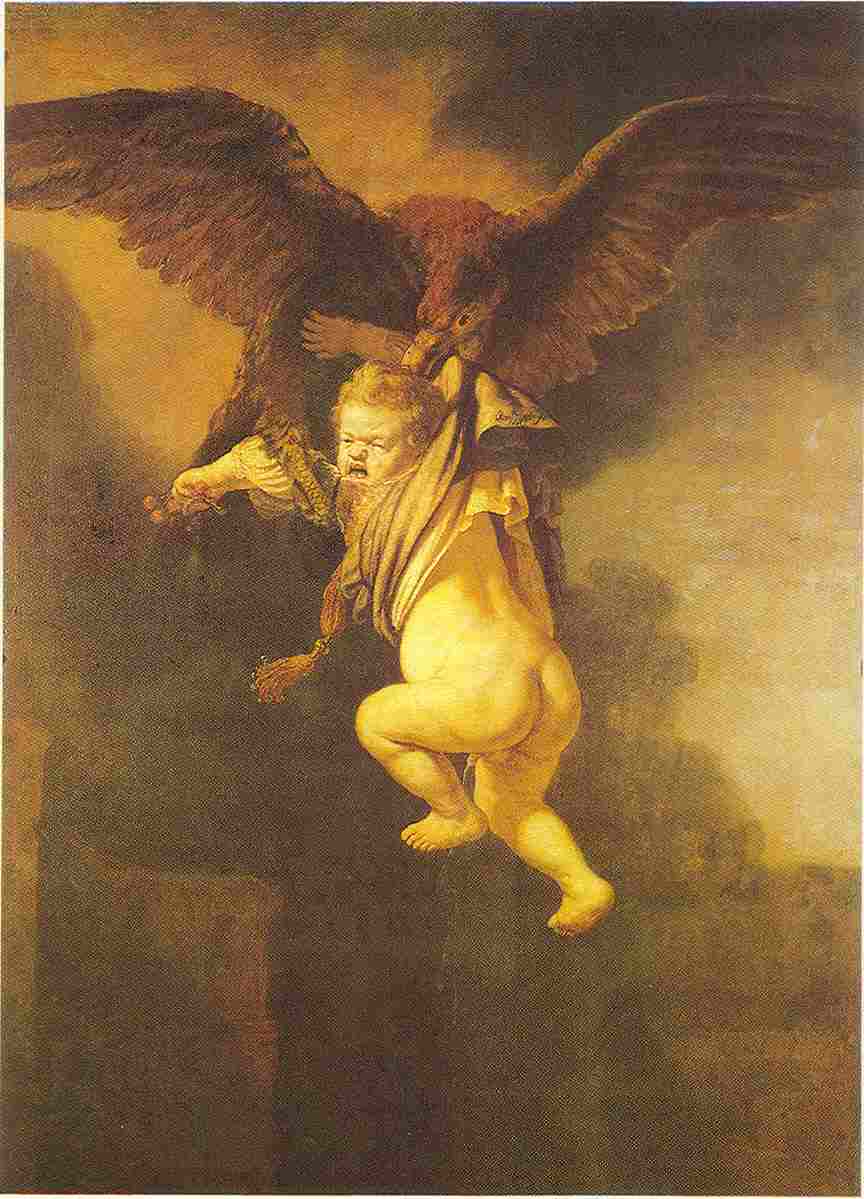 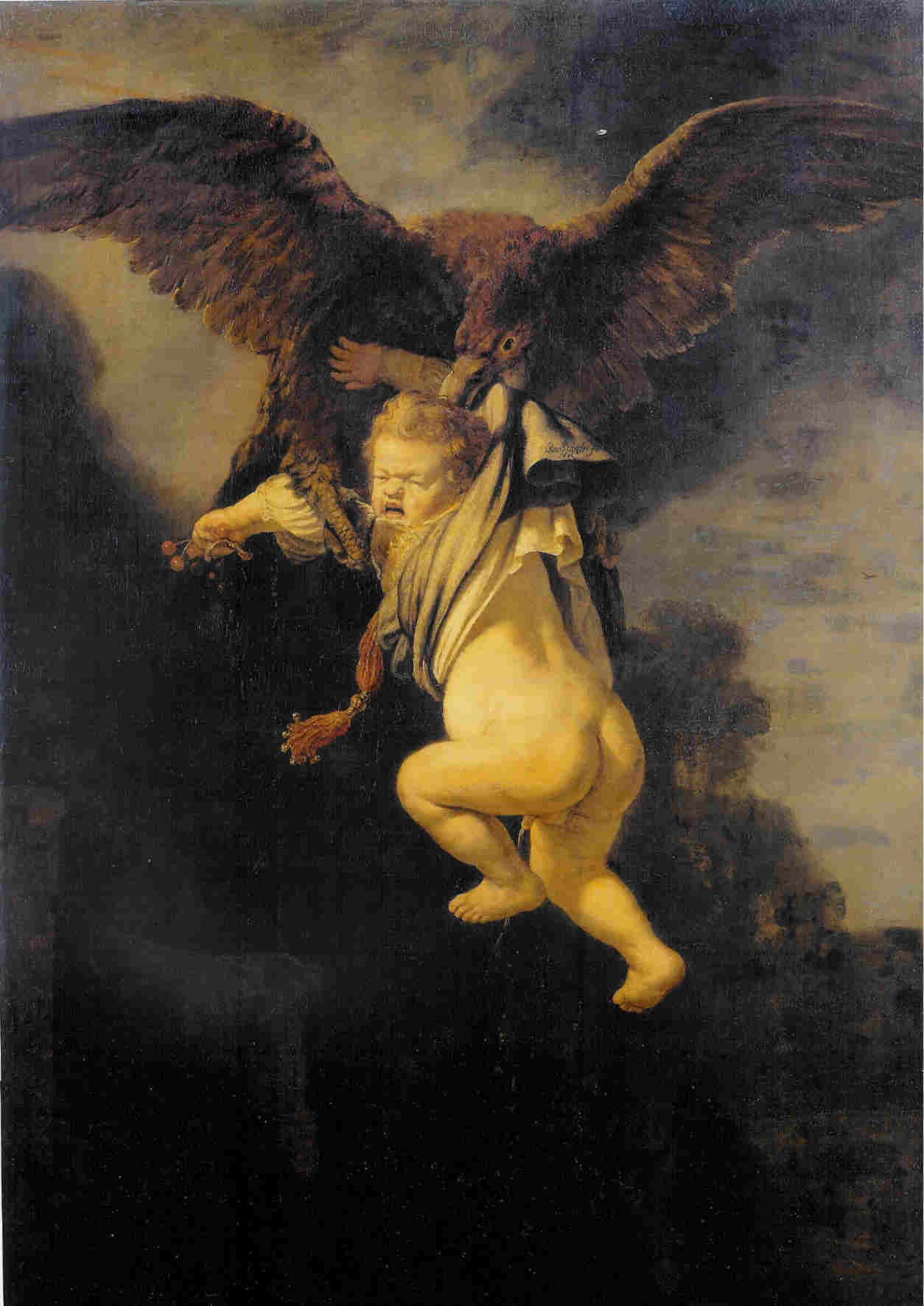 Rembrandt, The abduction of Ganymede, signed and dated 1635. Dresden, Gemäldegalerie. Before and after a recent restoration.

Last week in Dresden the curator of Dutch and Flemish paintings at the Gemäldegalerie, Uta Neidhardt, mournfully showed me the hideous damage done to Rembrandt’s Abduction of Ganymede in the 19th century by museum restorers who transferred the painted surface from Rembrandt’s canvas to a new one. The techniques for doing this at the time were uniformly destructive. The old canvas would be scraped off, sometimes after being dampened with water or nitric acid. Aside from the inevitable mechanical damage caused by laying the painting on its face and applying pressure to it, the paint layer would also be affected by the fluids, which would seep through the canvas. Some of the effects were not visible at the time. Which technique was used by the Dresden restorers is unknown, but they too undoubtedly felt that it was “based on good experiences over a long period of time.” Generation by generation, restorers discover the mistakes of their predecessors and substitute new ones of their own. Museum-wide campaigns of relining Old Masters on canvas, a marginally less damaging process than transfer, were still being conducted in the mid-20th century. More on this another time.

Knowing the Ganymede as well as I do before and after the recent restoration and cleaning, I can only say that I am very pleased to see it as it now looks. Had I been involved in the decision I would have chosen for muscular cleaning. However, I would never pretend that the intervention has extended the life of the painting. Time moves only in one direction. Every passing moment takes Rembrandt’s Ganymede further away from what it was when he finished it, and nothing we do can reverse that effect.

Friends and readers in Los Angeles: Next month I will be giving two public lectures in LA at which you are very welcome. Admission is free, but reservations are required.

Wednesday, 21 February at 3 p.m. in the Museum Lecture Hall at the Getty Center: “Rembrandt’s paper trail.” To make a reservation, go to http://www.getty.edu/visit/calendar/events/12679.html.

Thursday, 22 February, doors open at 5:30, lecture at 6:00, in the Sequioa Room of the Faculty Center at Westholme and Hilgarde: “Rembrandt’s last painting.” To reserve a seat (before 16 February) call Priya Mohan at 310-825-0913 or mail Priya at pmohan@support.ucla.edu.

In the night of 10-11 January an unexplained incident occurred that did away with nearly all the mails I received for a period of eight hours or so. If you mailed me that day and have not yet had a response, please send me your mail again. If you have mailed me at other times and have not yet had a response, forgive me. I do the best I can, but that is not always good enough.