If the climate really does change drastically, culture as well as the environment will be affected. Dutch culture is closely linked to certain winter conditions that may disappear. All that will be left is false nostalgia, of which we have more than enough these days.

With all the worries being laid on us about physical survival in the age of global warming, no one seems to be worrying about how menacing this development is to Dutch culture. Yet there is lots of threatened climate in our culture. When Poet- of-the-Fatherland-To-Be Gerrit Komrij completed his multi-volume anthology of Dutch poetry in 1994, he allowed himself to make a certain number of general pronouncements on the subject. The one that sticks in my mind concerns the most common metaphors in Dutch poetry. Topping the list, to my surprise as well as Komrij’s, was snow. When Dutchmen wax poetic, the first image that occurs to them is snow.

Fortunately, we did get a few flakes this winter. But if the warming keeps up and it stops snowing here altogether, the country is going to be cut off from its metaphorical identity. What is a future Dutch reader, sitting in a beach chair in his outdoor patio in mid-winter, to make of the opening and closing lines of “In the snow” (1909), by the archetypal Dutch Christian poet P.C. Boutens (1870-1943)?

Like unblemishable manna the new light
Of the first day of spring
lies on snow in March.
Never has bright happiness
Befallen me so bountifully
In all the springs I ever saw…

Because the warm-weather Dutchman of the future never will never have seen snow at home in mid-winter, let alone on March 21st, he will not be easily moved by this piece of meteorology or the Christian feelings it evokes. The meteorology, by the way, was real. Consultation with the historical weatherman Jan Buisman revealed that March 1909 was exceptionally cold, with snowfall as late as the 18th, so that Boutens indeed could have seen snow on the morning of March 21st 1909. 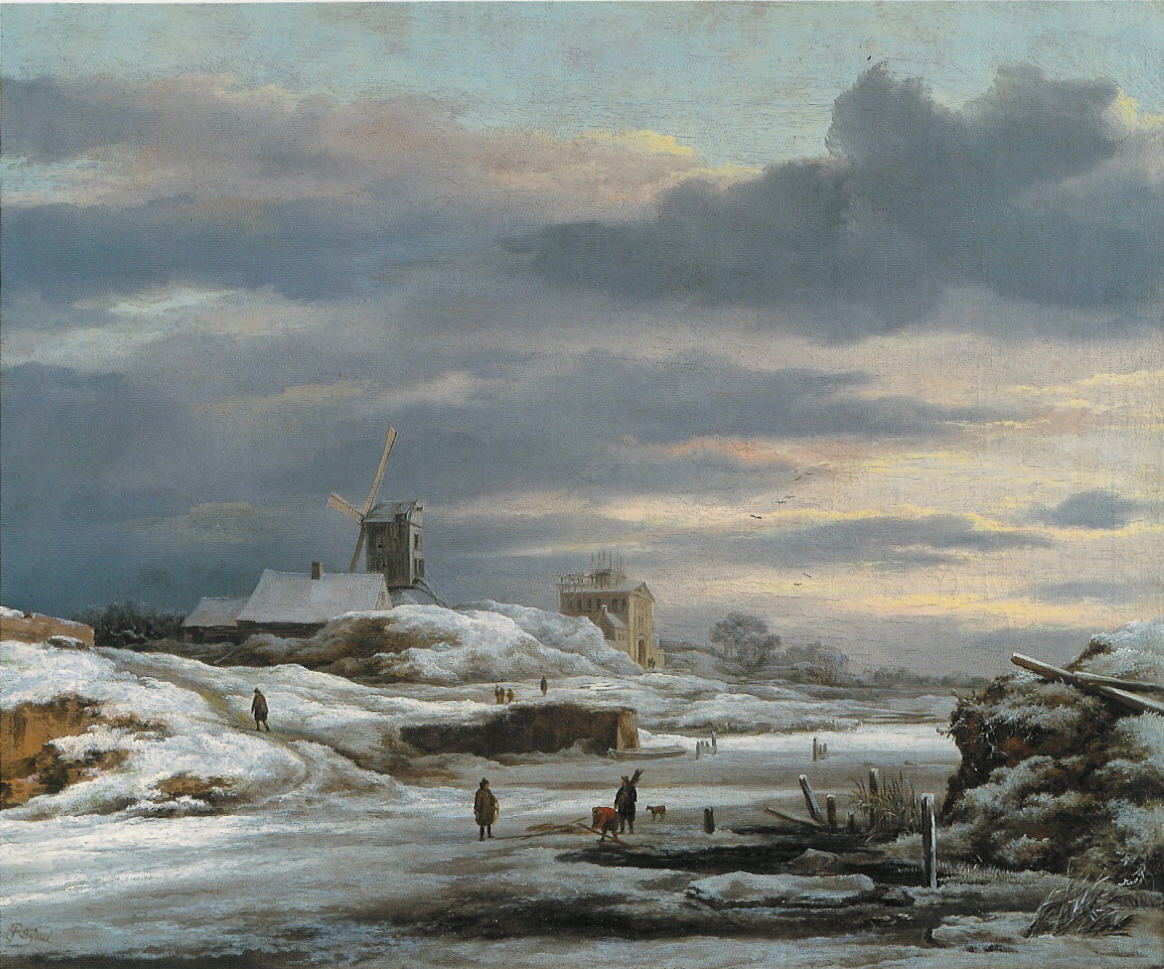 Jacob van Ruisdael, Winter scene, private collection.
One of the few Dutch winter scenes of the 17th century that really makes you think of an ice age.

Future Dutchmen will also be out of touch with the ice-skating scenes in winterscape paintings of the 17th century. These cookie-tin favorites are defining images of what Dutchness still means but will mean no longer. Skating scenes have recently been linked by art historians, wrongly, with another instance of climate change. The prevalence of ice scenes in 17th-century art, they have written, can be explained by the fact that the Golden Age fell within a period in the earth’s climate called the Small Ice Age, when the winters were colder than before and since. I was never convinced by this. It always seemed more likely to me that the appeal of these scenes lay in their being exceptional rather than common. This feeling was reinforced when Jan Buisman let it be known that the Small Ice Age began in 1430 and had bottomed out by 1600. It was not until after then that Dutch artists began to paint ice scenes. (They were preceded, as in all typically Dutch artistic specialties, by the Flemish.)

This observation brings a kind of melancholy consolation. Perhaps snow and ice will remain part of the Dutch self-image into global warming after all, though in the form of nostalgia rather than familiarity. This would fit nicely into the nostalgia-based principles of Dutch morality being foisted off on us by the government. There is one big difference, however: snow and ice were real.

Dutch readers abroad, with nostalgic needs of their own, will find the original of Maartsche sneeuw, a difficult poem, in the splendid Digitale bibliotheek voor de Nederlandse letteren, the digital library of Dutch literature. Art historians and literary historians will also find there the complete texts of Karel van Mander’s Schilder-boeck and the Wereldbibliotheek edition of the works of Joost van den Vondel and much, much more.

This column was written before the new Dutch government came out with its motto: “Samen werken, samen leven,” Working together, living together. The heads of the Christian Democrat and Christian Union parties, which have formed a coalition with the so-called Socialists, want this slogan to recall the post-war years. They announced that they want to restore the spirit of the 1950s, around the time they were born. Having breathed a giant sigh of relief in New York when the 1950s ended, I am not looking forward to their catching up with me in the Netherlands 50 years later. This business of Christians being together brings to mind the title of a book about the 1950s that I wanted to write only because I thought up a perfect title for it: Apartheid and togetherness.