The emergence of 32 works said to be unknown Jackson Pollocks, a generation after the death of the artist, had an uncannily similar precedent in the Wacker Affair, involving 33 paintings put on the market in the late 1920s as van Goghs. If art history indeed repeats itself, the Pollocks will turn out to be deliberate forgeries.

My conviction that history does not repeat itself is not as firm as it used to be. Listen to this. A generation has gone by since the death of a famous artist. Not just any famous artist, but an iconic figure who defined his time. A group of about 30 hitherto completely unknown works emerges that are attributed to him. Some experts cheer loudly; the market and the exhibition circuit roll up their sleeves. Then doubt is cast on the authenticity of the works, doubt that is shared by the official guardians of the artist’s estate. Scientific analysis tends to support the skeptics, but the champions refuse to capitulate. A long, nasty battle ensues. 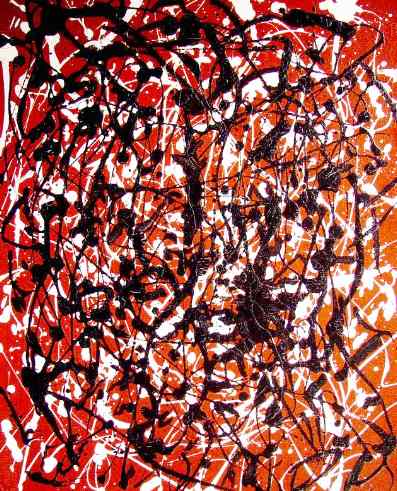 In the US, this scenario is playing itself out as we speak. In 2003 a man named Alex Matter came forward with eight drawings and 24 oil paintings on board that he says were made by Jackson Pollock (1912-56) and left behind in a storage locker owned by Matter’s father, a friend of the artist. Leading Pollock specialists herald the discovery, but other specialists and the Krasner-Pollock Foundation, owners of the estate, are not convinced. Scientists disagree on whether the new paintings display the special fractal pattern of a genuine Pollock. The issue is heading for the courts. 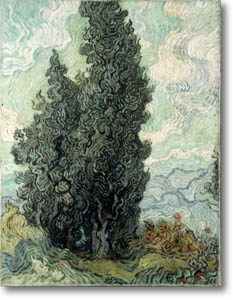 Probably painted by Leonhard Wacker in imitation of Vincent van Gogh, Cypresses. Private collection. (From the website of the Canadian Institute for Conservation.)

Flashback to 1928. The Berlin art dealer Otto Wacker (1898-1970) brings 33 new paintings by Vincent van Gogh (1856-90) to the market. He claims to have acquired them from a secretive Russian refugee general who had bought them from Johanna van Gogh-Bonger (1862-1925), the owner of the van Gogh estate. Leading experts do not at first doubt their authenticity, but in the following period they dispute all or part of the attributions, in conflicting combinations. V.W. van Gogh, Johanna”s son and only heir, denies that his mother ever sold any paintings at all to a Russian general. A scientific investigator of art materials uncovers evidence that the paintings are false, but keeps this to himself. A spectacular trial in Berlin in 1932 ends with the conviction and imprisonment of Wacker for fraud; the court finds that most of his paintings are false but admits the possibility that some of them are genuine.

The Wacker affair lies at the heart of an admirable and utterly fascinating new book by the anthropologist Henk Tromp. Tromp’s main subject is the behavior of individuals in the art world when confronted with issues of true or false. He has performed research of a kind that art historians, with their focus on authenticity itself, seldom conduct. What Tromp finds again and again is that the key players have extreme but unacknowledged conflicts of interest on which they are seldom challenged. They are scholars and connoisseurs, but also advisers to museums, middlemen for dealers, and sometimes collectors. Their behavior reflects this; it seldom resembles the selfless pursuit of unvarnished truth.

If the parallel holds up, support for the authenticity of the Pollocks will diminish quickly but will linger on among a hard core of believers for decades. When experts disagree, people tend to think that the truth is in the middle. Sometimes, though, what is in the middle is nothing but a big lie.

From the 21st story of the Grand Hyatt Buckhead in Atlanta, the skyline of downtown Atlanta rises from the plain like Emerald City. I’ve been wanting to have a look there, but no one seems to go there or to find it worth visiting. The museums I have visited – the Oglethorpe University Art Museum, where I lectured on Rembrandt in connection with an exhibition of Rembrandt’s etchings of beggars, the High Museum and the William C. Carlos Museum at Emory University – are located in peripheral areas known as midtown and Buckhead. Loekie and I spent ten days in Los Angeles without ever getting downtown. There it all happens on the west side and the valley. Only in New York, our other destination on this trip, is downtown still the place where it’s at.

At the other end of our view another magnificent object breaks the flat horizon. It is called Stone Mountain, and according to Wikipedia is “the world’s largest exposed piece of granite.” It reminded Loekie and me of Uluru in the middle of Australia. That mountain is sacred to the aboriginal population, and although not everyone respects their request not to climb it, Uluru itself is uninhabited and untouched. Stone Mountain “is well-known not only for its geology, but also for the enormous bas-relief on its north face, the largest bas-relief in the world. Three figures of the Confederate States of America are carved there: Stonewall Jackson, Robert E. Lee and Jefferson Davis. The mountain was the site of the founding of the second Ku Klux Klan in 1915, and the Klan was intimately involved in the design, financing, and early construction of the monument.” Now it is the scene of a laser light show and a family theme part. We’re giving Granite Outcropping too a pass, like Emerald City. Next time.

After three weeks on the road, we are looking forward to flying home this evening. The joy will be brief. After three days we will be leaving for Maastricht for the TEFAF, then Paris and the north of France for the CODART TIEN congress and study trip.