On the road, especially in faraway places, Schwartz is known to succumb to an upwelling of Jewish sentiment that he never acts on at home. In Isfahan, he attended Friday-night services in the synagogue of a 2,500-year-old community and got a powerful dose of tribal feeling.

Three weeks ago I attended Friday evening services at the main synagogue of Isfahan. I cannot remember the last time that I went to a kabbalat Shabbat service, but I cannot have gone much more often than once a decade for the past 40 years. As little as I show my face at the synagogues close to where I live, on trips to exotic places I become sentimental about Judaism. The effect was all the stronger in Iran, whose leaders preach holy war against Israel and which has some of the oldest Jewish communities in the world. 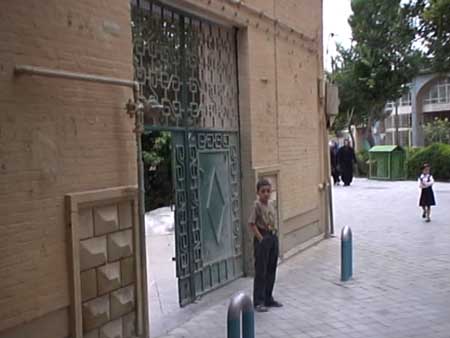 I announced my intention to pay this visit to people I met in Iran, on the lookout for negative reactions of a particular kind. If I had picked up a sign that I might be embarrassing or endangering the worshipers in the synagogue, I would not have gone. But no one said or hinted at anything of the kind, so I went. The synagogue turned out to be two blocks from the Abassi Hotel, where I was staying, on a square called Felestin – Palestine – Square. (In my childhood the word Palestine was as heartwarmingly Jewish as Israel later became.) It was unmarked from the street, behind a green iron gate. But at 5:30 on Friday evening the gate was ajar, and I walked in, with my camera and my tourist getup. 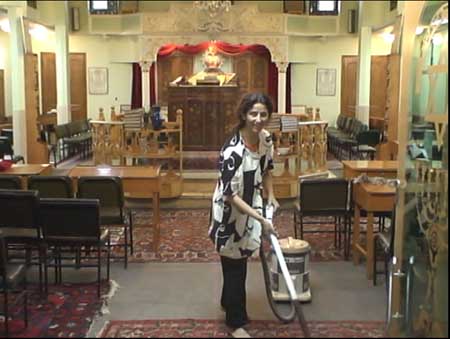 A young woman who was vacuuming the synagogue greeted me with a bright smile. Beside Farsi, she spoke only a few conventional Hebrew and English phrases, but I gathered from her that the service was going to take place in about an hour.

Foolishly, I did not stay as the congregation trickled in, which would have given me a chance to speak to people. I went to the hotel lobby for a rest and returned as services were about to begin. 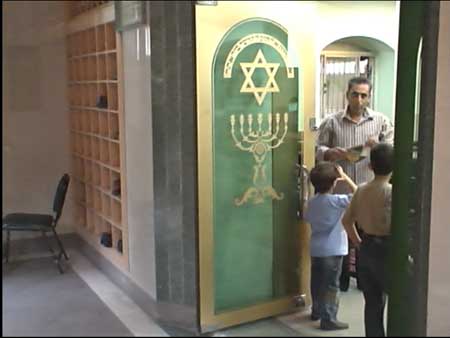 I saw to my considerable surprise that there was a shoe rack outside the entrance, as in a mosque, and that people used it. So I took off my shoes and went in. At first, no one paid attention to me, but in the course of the 75 minutes that I spent there more and more of my neighbors engaged in conversation with me. They wanted to know my name, where I was from, whether I was married and had children, how I liked Isfahan, how many Jews there were in Holland and how they lived. One man, who was said by another to be the richest Jew in Isfahan, invited me to dinner at his house, but unfortunately I had a flight that evening and could not accept. I left a few minutes to 8 p.m. during the sermon – not a usual part of the Friday service where I come from – by the young chacham (rabbi). My rich companion told me as if it were a fact of great significance that the chacham came from Shiraz.

The Muslims to whom I spoke about religious groups in the country all said the same things. There was no internal tension between Shiites and Sunnis. Jews, Christians and Zoroastrians were free to practice their religion. Jews were honored members of the community, and no one was jealous of their legendary wealth even though they are notorious moneygrubbers. I did not have a chance to check the guidebook story that the Jews of Isfahan were required to listen to a Muslim sermon on Friday afternoon before their own services. I did notice though that the mosque across the street from the synagogue was called the Al Aqsa mosque. The Temple Mount is on everyone’s mind. The Jews were less bland about interconfessional relations than the Muslims: they made disparaging remarks about the Muslims of the city.

The service, conducted in the Sephardi mode from good prayer books printed in Jerusalem in 1947, was impressive. About 200 people were there, of a community that they told me numbered a thousand. Kabbalat Shabbat, the welcoming of the Sabbath Queen, is kind of sexy, and the Iranian Jews make more of that than most. They chant the entire text of the Song of Songs, lyrical, gently erotic ballads that are interpreted as metaphors of the love between God and Israel. Various members of the congregation took turns from their seats reading the difficult text, which they did expertly. The prayers too were read by members of the community, even a little boy for part of the service. The atmosphere was respectful and dignified. Women were allowed to sit in the same space as men, off to one side, as well as in the uncurtained upper balcony. I found myself thinking that if I lived in Isfahan I might go to shul more often.

Having spent an evening with Iranian Jews in Los Angeles in May and an hour with their relatives in the home country, I have recently made the acquaintance of a 25-year-old diaspora and a 2,500-year-old one. Scoffing unbeliever that I am, I love belonging to that world.

Imagine my horror when I opened my bags in the hotel in Tehran to discover that I had left my Nikon D40 digital single-lens reflex camera at home and had only brought a Sony camcorder that takes mediocre stills. The photos in this column are not even that – they are screen shots of pieces of film. Please accept my apologies and draw your own lessons from this example.