The Rijksmuseum has published the first volume in a series of scholarly catalogues of its collection of Dutch paintings of the 17th century. The two books, one of text and comparative illustrations, the other of color plates, are not only a model of collection catalogues, they are also an unguarded kaleidoscopic self-portrait of Dutch society in the early years of the Republic. Schwartz is lyrical.

For the first 175 years of its existence, the Rijksmuseum lagged behind the international standard in publishing catalogues of its painting collection. The successive catalogues fell short of what leading French, German and English museums were producing. After 1920, none of the publications called catalogues of the paintings in the Rijksmuseum actually provided information on all the paintings owned by or on loan to the museum. None was adequately illustrated. Then, in 1976, the museum took the lead in one particular kind of catalogue, the summary illustrated catalogue. In a single volume of 911 pages, 30 x 24.5 cm. large, with 5324 thumbnail black-and-white illustrations, the museum laid its complete painting holdings before the world. To underline the point, the book was given the title All the paintings of the Rijksmuseum in Amsterdam: a completely illustrated catalogue. In the museum, where it is still used day by day, the book is called All the paintings. In 1992 it was followed by a 140-page supplement, in the same format and design.

“All the paintings,” Jan Piet Filedt Kok now writes, “completely opened up the Rijksmuseum’s collection…. Up until then the catalogue had only been sparsely illustrated. The publication represented an enormous advance in the sphere of collection management…. The clear layout, the high standard of the small illustrations and the detailed indexes were innovations within the genre of museum collection catalogues… The Rijksmuseum catalogue was a new phenomenon and served as a model for others, as is expressly stated in the Uffizi’s complete catalogue of 1980.”

In 2007, the Rijksmuseum repeated this triumph in the other main type of collection catalogue, the catalogue raisonné. Whereas each page of All the paintings had to provide space for about seven paintings, volume I of the new Dutch paintings of the seventeenth century in the Rijksmuseum Amsterdam, devoted to Artists born between 1570 and 1600, treats 445 paintings in a 583-page text volume and about 432 (unnumbered) pages in an illustration volume. The extra space is given to biographies of the artists, extensive information on the technique and provenance of each painting, succinct art-historical discussions of each, and large-format color illustrations of every single painting.

What makes this publication so exemplary is the combination of a number of outstanding features. To begin with, the large reproductions in color, following the same numbere order as the entries, from 1 to 445, making for easy navigation. The fine quality of the illustrations, the lavish sample of full-page details, and the generous, reader-friendly layout of the text, with comparative illustrations and notes integrated, make it a pleasure to sit with the two books. You do need a space one meter wide and half a meter high to manage this.

Then begins an experience to treasure. The biographies of the artists and the entries on the paintings are not only up to the last minute in research. They are also written to be read. This is far from the rule in scholarly catalogues, which are often out to cover all bases as economically as possible, and in which density is prized. Believe it or not, Artists born between 1570 and 1600 is captivating enough to read from cover to cover rather than just being consulted for reference. With all respect for the wave of excellent recent collection catalogues of Dutch paintings to emerge from American, German and British museums, I have never before been inspired to read them this way.

Reading the catalogue like a book was a remarkable experience of a completely unexpected kind. Let me explain.

When the New Rijksmuseum opens in a number of years after a decade-long reconstruction, it will offer a chronologically ordered walk through the galleries along a chosen group of objects that, in keeping with the current mode, “tell a story.” By all indications, it will be a story about what makes the Dutch so Dutch. I’m sure it will contain some surprises and touches of irony, but basically it will confirm existing notions of Dutchness. The curators will choose the best paintings that fit this picture and that they understand or think they understand. Inevitably, the rough edges of the record will be smoothed over.

The 445 paintings in Volume I, no more than 40 or 50 of which will make it into the New Rijksmuseum, do not pretend to tell a story. They were not cherry-picked for their beauty or to make a point in an historical argument. They were acquired mainly by donation over a period of more than 200 years from a wide variety of sources, and they are dished up to us in the historically meaningless alphabetical order of the artist’s name. These paintings and their entries are the closest we are likely to get to unmanaged, unmanipulated and highly authentic information about the period concerned.

At this point, the better qualities of Volume I come into their own. Because the biographies and entries cover so much more than mere art-historical technicalities, and because the 445 paintings by this generation of artists in the Rijksmuseum is by far the largest in the world, they add up to an unguarded kaleidoscopic self-portrait of Dutch society in the formative years of the Republic, a self-portrait that does not always resemble the stereotypical Dutchman.

The lives of the artists and the subjects of the paintings are full of circumstantial details of a kind that do not fit into the constructed narrative awaiting us in the galleries. At least as important a difference is that many of the paintings in Volume I are not well understood at all. The stories they tell are full of holes. 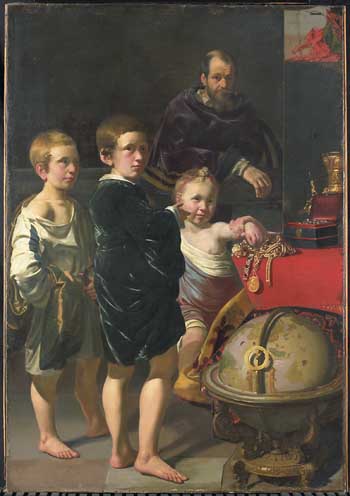 For example, take two unusual paintings by the Amsterdam painter Thomas de Keyser (1596/97-1667), who was also a stonemason, a dealer in building materials, a city official and an architect. Each of them shows three children. The earlier one, purchased in 1891 for 1270 guilders, is stitched together from four pieces of the same canvas, in a constellation that does not correspond to the original composition. When the painting was bought, the scene included an oval portrait of a man on the wall, but during a restoration in 1926 it turned out that the complete figure of the man was painted, as a presence in the same space as the children. The mysteriously disembodied hand of a woman was uncovered, clasping the underarm of the youngest child. On the right is a large globe and a table covered with jewelry. The canvas belongs to the rare category of paintings dated to the day: 10 August 1622. The author of the entry, Jonathan Bikker, suggests that the painting may be a portrait historié, a portrait in the form of an historical subject, based on the Roman story of Cornelia showing her children. “Valerius Maximus relates the story of a Campanian matron who showed Cornelia her jewellery, the finest in existence. Cornelia responded by claiming that her jewels were her children.” Bikker suggets that the date was the anniversary of the children’s parents. 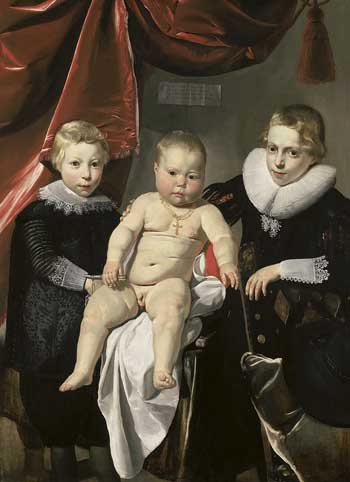 Five or ten years later, de Keyser painted three brothers named Hendrick, Johannes and Simon, identified in an inscription even more unusual than the daydated one. Translated from the Latin by C.L. Heesakkers, it reads: “Thrice six years between us have we, full brothers three. I, Henricus, was twelve, Johannes, the next, was five, and the third is from this year. He is Simon unclothed, for he wishes wealth to be spurned.” The painting was bought by the museum at Sotheby’s in London in 1987. (Too bad the price is not given.) In 1990 the head of the Rijksmuseum department of paintings, Pieter van Thiel, published a fascinating article on it: “Catholic elements in seventeenth-century Dutch painting, apropos of a children’s portrait by Thomas de Keyser,” Simiolus: Netherlands Quarterly for the History of Art 20 (1990-91), pp. 39-62. Despite the pertinent information on the sitters contained in the inscription, van Thiel was unable to identify them. The cross around Simon’s neck marked the brothers as Catholic, and van Thiel interpreted both his full frontal pose and the numerology of the inscription as references to Christ. Simon’s parents, he concludes, intended him to imitate Christ, perhaps by taking holy orders. The fact that Thomas de Keyser was a Remonstrant, a denomination that the late Isa van Eeghen of the Amsterdam archives liked to call Catholic Protesants, may be significant in this respect.

For once, I felt that the cataloguer, Jonathan Bikker, was cutting corners. “’He is Simon unclothed, for he wishes wealth to be spurned’. This proclamation, obviously made by Simon’s parents on his behalf,…” But that is not what the text says. Baby Simon himself is said to be spurning wealth. (Who was it again who interpreted Dutch culture as an Embarrassment of riches?) “One imagines that the import of Simon’s nudity, elucidated in the Latin verse, extends to his brothers Henricus and Johannes as well.” This too begs a question. The older brothers are dressed in gorgeous lace and brocades. In what way does Simon’s nudity extend to them, except by way of contrast? This painting is more of a riddle than van Thiel or Bikker admits.

Can we take it for granted, as Bikker does, that adding the text was the idea of Simon’s parents? Is it sheer coincidence that two paintings of three children by the same artist should each bear an idiosyncratic inscription involving numbers? Could it not have been Thomas de Keyser who contributed these intriguing elements? The thousands of unanswered questions such as these and thousands more that are answered in Volume I, questions about intriguing paintings that are displayed in optimal form, provide an enriched form of art appreciation. The fact that most of these paintings are never on show only adds to the experience. (If the illustrations in the book, on half-matte paper, are not brilliant enough for you, all of them can be viewed in shining pixels at http://www.rijksmuseum.nl/zoeken/index.jsp?focus=assets〈=en, another of the exemplary facilities offered by the Rijksmuseum to make its holdings available to the public.)

In 1976 I was the publisher of All the paintings. I know what kind of work goes into a book of this kind, not only on the part of the curator-authors but also the unsung editors, translators and book designers. To achieve the necessary degree of editorial consistency in a publication as complex as this requires not only high professional capacity but also fanatic dedication to accuracy. Volume I is a model in this respect, thanks to the outstanding work and fanaticism not only of the authors, especially Jonathan Bikker, the series editor, but also Michael Hoyle, translator and text editor, Maud Soethout, copy editor, and Berry Slok and his studio, designers.

Last week Loekie and I took the hardhat tour through the New Rijksmuseum under construction. That too was a thrill. If you can, book it.