To test the extent to which Iraq would have become a model Middle Eastern democracy by the year 2005, well into the era of neocon nirvana, in 2003 Schwartz and his artist buddy Joseph Semah plan to stage a Purim Play in Baghdad in March 2005. Happy holiday. Five years ago next month I ran into a buddy of mine at Café Luxembourg in Amsterdam. The Israeli-Dutch artist Joseph Semah and I had been through challenging times together. In 2001 he had challenged me to come up with an adjunct to his performance Full Moon II on Lucien den Arend’s Saenredam Island in the town of Barendrecht. The project was part of the program for Rotterdam as cultural capital of Europe. Semah and Felix Villanueva staged a performance on land, water and sky giving musical and physical form to the bond between the heavenly and earthly Jerusalem. While Semah chanted the Song of Songs on the shore, bridal couples swam, sunk and screwed their way to and on the island. Preceding which, on that memorable June 7th, I gave a rather personal lecture, for hundreds of Barendrechters, a town known for its strict Calvinism, on the kabbalistic meaning of the full moon.

On October 18th, in De Unie in Rotterdam, in the framework of the same project, we went on. To a small audience, under the irritating chairmanship of a woman who said with self-satisfaction that she had read my book on Saenredam “laterally” and kept asking me irrelevant questions about Emmanuel Levinas to which, never having read him, I had no answers, I linked Saenredam to the heavenly Jerusalem through his depictions of churches by Jacob van Campen. Van Campen gave to several of his churches, including the Nieuwe Kerk in Haarlem, drawn and painted by Saenredam, elements that referred to the Temple in Jerusalem. The Reformed Church in the Netherlands, in this view of things, replaced the Jewish Temple as the true architectural conduit to heaven.

On that occasion I challenged Semah as well. To my exposé of 17th-century symbolism, before the coffee break, I added a controversial 20th-century appendix. I had brought with me to De Unie my cherished copy of a book that I had bought in Jerusalem in 1995. It is called Tachnit beit habechira hamikdash: sefer yarim rosh and it was published in Jerusalem immediately after the fall of the Old City in the Six-Day War. The title of the oblong book translates as Plan of the sacred home of God’s choosing: the book Raise the head. 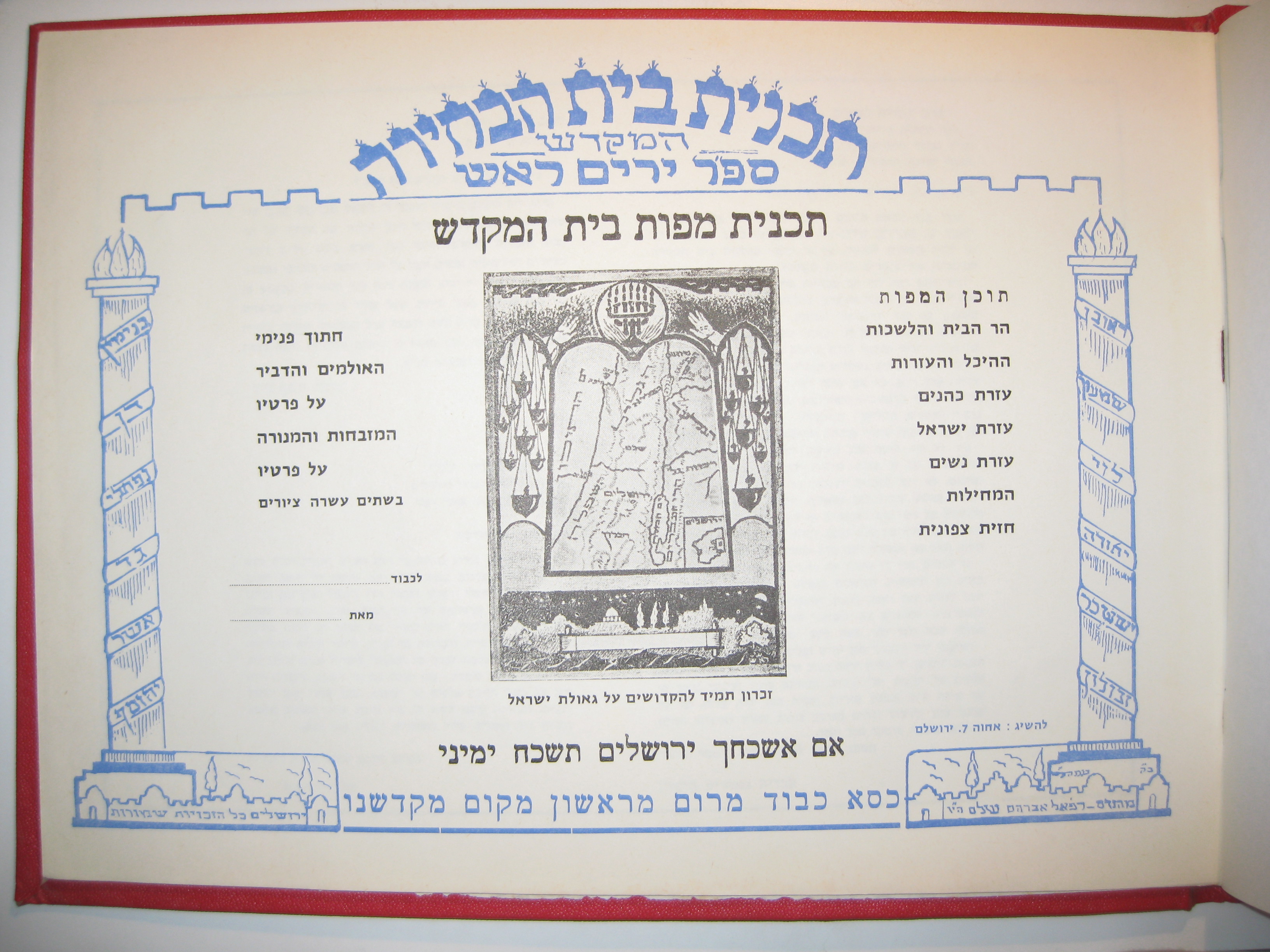 It is provided with 12 handy groundplans and elevations of the head to be raised: the Temple destined to be rebuilt on the Temple Mount. There is no mention of the fact that the site is presently occupied by the Dome of the Rock. The book has a dedication by Yosef Ovadiah, one of the leading figures in the Sephardi rabbinate. I told the audience a story that I had heard about the Six-Day War and the Temple Mount. With bullets flying around them, a quorum of male Jews, a circle of ten men, under the leadership of Chief Chaplain Rabbi Shlomo Goren, danced and prayed on the Mount, hoping to encircle the Holy of Holies and therefore to force the coming of the Messiah.

Semah was infuriated. “These people are not Jewish. How can you expect them to understand that this is an extremist position that has nothing to do with real Judaism?”

“Chief rabbis or not, these guys are nuts. I expect you to let the audience know this.”

Deciding to be chique rather than principled for once, but not willing to retract what I had said ex cathedra, I came up with a compromise solution. There were few enough people in the café of De Unie for me to be able to go up to each group one by one and explain that most Jews do not believe that the Dome of the Rock should be demolished.

I set the stage with these events of 2001 to make it clear that when Joseph Semah and I meet we don’t talk about the weather. Certainly not when we met in Café Luxembourg in April 2003. Both of us were outraged at the American invasion of Iraq and the patent lies by which it was justified. (Any reader who might be inclined to buy Hillary Clinton’s ‘Knowing what we know now…’ version of things is urged to read the speeches made by her colleague Robert Byrd in her own Senate in March 2003, before the invasion.)

Joseph has a special tie to Iraq. His grandfather was the chief rabbi of Baghdad. Within minutes he and I concocted a plan for a Jewish way to hold America to its word. If the invasion was intended to bring democracy and freedom to the Middle East, then what better means to test the results than to celebrate Purim, the Jewish holiday during which the war was begun, with a Purim Play in Baghdad?

The Purim Play or Purim Spiel is a carnavalesque performance with any content the performers choose, as long as it is irreverent and preferably lewd. It is intended to relive the joy of the Jews of ancient Persia when the plot of the evil minister Haman to destroy them was discovered before any Jews died, and Haman and his ten children and lots of other non-Jewish Persians were killed by the Jews instead. Reenactments of the slaughter are a perfectly legitimate theme for a Purim Play. So are brides and grooms making love in the water.

If Iraq were to be made safe for American-style democracy, then it should be able to take a Purim Spiel, no? Perhaps not as early as 2004, but by 2005, with all necessary preparations, precautions and security, and accepting the risk, why not? (Actually, there are lots of reasons why not, but Semah and I were ready to ignore them.) As much as we may have hated it, the invasion of Iraq had succeeded, had it not? In two years, with the heartfelt protection of Paul Wolfowitz and Donald Rumsfeld, Schwartz and Semah would reveal to the world the quality of tolerance in Baghdad.

This week is Purim five years on. Baghdad is not yet safe for Starbucks, let alone a Purim Spiel. Until next year in Baghdad, Joseph? Not likely.