The idea that Greek sculpture was once colored is easier to deal with than real-life reconstructions of what it looked like. For some unfathomed reason, Schwartz prefers the original polychromy of Gothic statues but not of Greek and Roman ones.

I would not go as far as my travel companion and say that I am sorry that I ever saw the exhibition. But it comes close. In December, at the Sackler Museum in Cambridge, Massachusetts, we went to Gods in color: painted sculpture of classical antiquity. To shock and awe you unprepared, here is an impression of what greeted us. 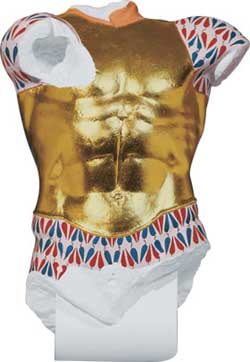 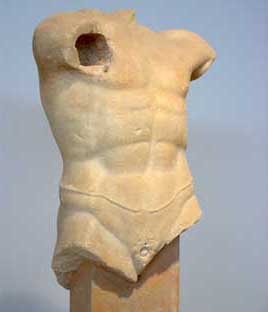 On the right is a sixth-century B.C. torso from the Acropolis in Athens, number 599, in the colorless state in which it has come down to us. (The original was not in the show.) Left is a cast of the same torso, treated to the colorizing ministrations of Susanne Ebbinghaus and Amy Grauer of the Harvard University Art Museums, in consultation with colleagues in Munich and Copenhagen.

I have known for a long time that much if not all ancient statuary was originally colored, and the idea pleased me. It introduced a thrilling twist into the history of art appreciation. How ironic that the very qualities for which ancient statuary was admired were alien to the original conception of the works. The coolness and purity of Greek sculpture, its idealization of the nude human body, its respect for the stone from which it is carved, its less-is-more subtlety, were sheer projections of latter-day art lovers that never existed in the minds of its makers.

As appealing as the idea may have been, confrontation with the real thing was a jolt. Museum visitors in Hamburg, where the exhibition was held before Cambridge, proclaimed Greek sculpture dead to them after having seen what it really looked like. I know what they mean. The outermost surface of these statues was not the work of sculptors at all, but of gilders, painters, polishers and finishers, advised by specialists in protocol, military and religious insignia and costume. The classic Greek sculpture of art history was buried beneath an appallingly chintzy and formalistic top layer.

Thrashing about for some way to reconcile a pleasing idea with a bad visual trip, I came up with a hope for the future. It may be impossible for me to accommodate my expectations of classical art to the historical reality, but my grandchildren may be luckier. Colorized Greek statues look like nothing so much as avatars in a top-end computer game. With luck, this could bring them closer to kids. If the creators of the Battle of the gods and the giants would have felt more akin to George Lucas than to Michelangelo, then they will be more accessible and more exciting to young people who are introduced to them in color.

O, Michelangelo! If it gives me a kick to see the misconceptions of Winckelmann and his followers rectified, I get no pleasure at all from thinking about what this means for the marble sculpture of everyone from the Pisani to Rodin. To the degree that their uncolored sculpture was meant to resemble the art of the ancients, they were modelling themselves on a half-product that was seen only in the studio for the brief moment between the completion of carving and delivery to the painters. Had they known this, would they too have gilded and painted their marble?

To add to my confusion, my reaction to late Gothic wooden sculpture is exactly the opposite to what I felt about polychromy in ancient marbles. At a marvelous Tilman Riemenschneider exhibition in Würzburg in 2004 it was the uncolored pieces that caused irritation.

Left is a Madonna and child in the Kunsthistorisches Museum in Vienna with original gilding and polychromy, on the right a similar piece in the Badisches Landesmuseum in Karlsruhe that has been stripped down to the limewood. Although I think I once would have preferred the bare, more abstract sculpture, at the exhibition I found myself actually somewhat repelled by work in this condition. What I saw in them were mutilated victims of misplaced Modernist purism. I imagined a restorer, on the order of a curator or art dealer, scraping off the vestiges of Riemenschneider’s coloring in the name of truth to material or some other anachronistic value or taste. I did have to be careful in expressing my judgments out loud. Aside from the always present danger of making a pest of myself, there was also the horrible risk that the object of my contumely would be not a restorer with no sense of history but Riemenschneider himself, who sometimes made wooden or stone sculptures without polychromy. Before embarking on one of my peeved defenses of authenticity, it was wise to give the label a quick glance. For every ten uncolored statues that were “ursprünglich gefasst” (originally colored) there were two or three that were “ursprünglich ungefasst.”

True, the aging of the pigments on the wooden sculptures creates a more delicate effect than the new coloring of the Greek casts. And the studios of ancient Athens where a torso like fragment 599 would have been finished would undoubtedly have produced more attractive works than the cast colored in Cambridge. But even discounting these things as well as I can, I still find myself preferring polychromy in Gothic art and disliking it in Greek and Roman.

That’s it for now. When I work my way out of this bind, you will be the first to know.

We are enjoying the luxury as well of not traveling. After two years during which we seemed to be away more than at home, we are especially delighted with our house. In the coming months we are taking steps to safeguard the special home feeling by taking trips to Gelderland, Lille, where I am speaking at a conference on Dutch-French artistic exchange, Florence for the 50th anniversary of the Netherlands Institute there, Venice, and then Florence again, Genua and Turin with CODART.

Although the party was our present to each other, we added to it yesterday when at the Old Masters auction at Christie’s Amsterdam (also known as a “flat-art sale”) we bought a painting by one of the Pynas brothers, Jan or Jacob. Loekie spotted it at the viewing day, and we both fell in love with it. The subject is Abraham greeting the three angels. The painting seems to be completely unknown. Can you tell us more about it? 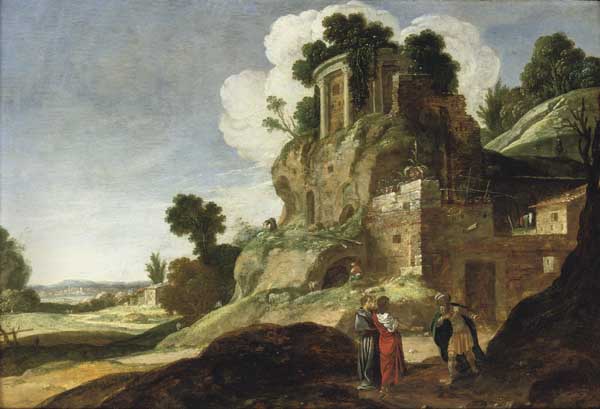