The opening of the New Rijksmuseum prompts reflection on how Schwartz experienced the museum from the 1960s until 2003. 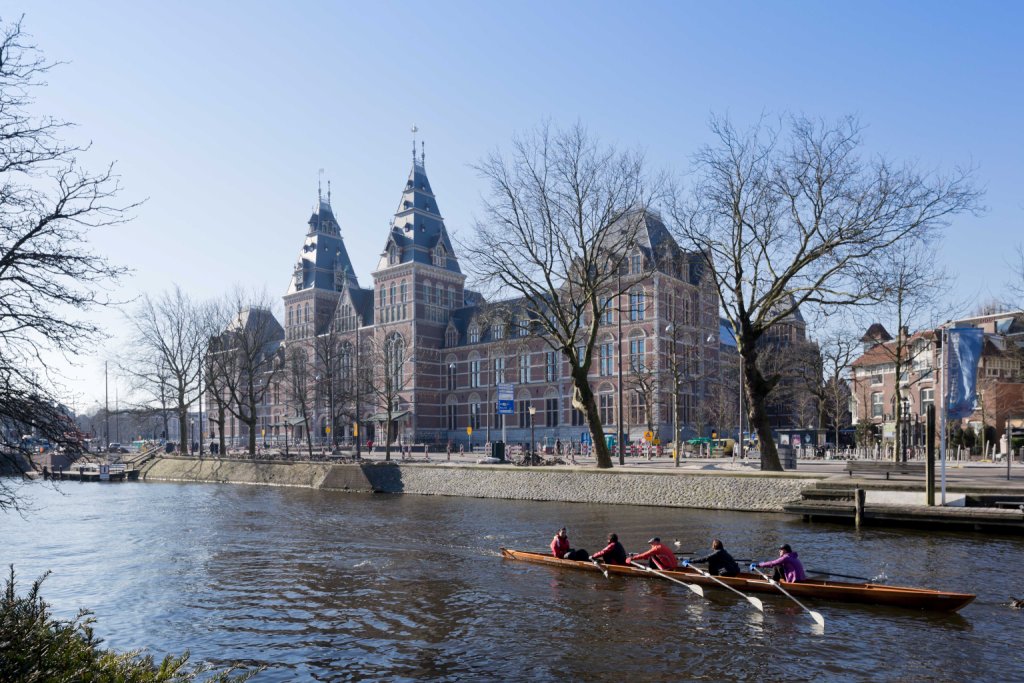 Tomorrow, 13 April 2013, the Rijksmuseum is reopening in full, after a renovation period of ten years during which only a small part of the building and its collection was accessible. At the press visit and a preview for art historians, I was overcome with a sad sense of what I had been missing not so much in the past ten years but during the decades before the nineteenth-century parts of the museum were closed in 2003. I had not allowed myself to express disappointment in the visits I paid to the museum between 1964 and 2003, but now it came up in a rush. What the main galleries offered in those 40 years was one painting after another against a white wall, in undistinguished, artificially lit spaces with no sense of their being part of a building with character of its own. The Rijksmuseum resembled the slide lectures of my university training in art history. Both were presentations of isolated images, removed from the living, diverse environments for which the art objects were made.

A museum on that model gives institutional form to the less admirable aspects of Modernism. The pretence that a work of art has a self-sufficient existence denies the undeniable truth that art is embedded in culture and the artist in society. The nearly absolute priority assigned to painting and drawing over the “applied arts” is an historical deception. To assume that unmediated confrontation with a work of art is possible and is the desired form of experiencing art is a psychological falsehood. Even without engaging in ideology on these points, the Rijksmuseum applied them in what the designer of the new presentation, Jean-Michel Wilmotte, calls its museography. As I experienced it, this had a bullying effect on the visitor, especially on the visitor who was a student of art history. I felt as if I were being called upon in each and every confrontation to engage with the work as a kind of equal, a challenge to which I was plainly unequal.

If this is an indictment of most museums, so be it. As I said, I did not allow myself to feel disappointed before I had an alternative, and that remains true when I visit other painting galleries. With regard to the Rijksmuseum, I am happy to say that the alternative is now there, and I am very grateful for it. In the New Rijksmuseum, the sharp edges of the Modernist museum have been shaved down, in a way that not only reduces pain and irritation but also moves me. The New Rijksmuseum pays respect to artistic and historical dimensions of the building and the collection that previously were disallowed and partly destroyed. That was literally the case with many of the decorative and symbolic elements built into the museum by its nineteenth-century architect, Pierre Cuypers. Starting in the 1920s, successive directors were so offended by Cuypers’s all-pervasive symbolic and design solutions that they hacked them up, hammered them over or painted them white. The majestic Cuypers courtyards, filling the museum with light and giving the Rijksmuseum a groundplan resembling that of Jacob van Campen’s town hall of Amsterdam, was stuffed with nondescript rooms in which the visitor lost his way. In doing all of this, the Rijksmuseum spoiled the period flavor of its own fabric without getting anything in return but wall space.

Cuypers not only united outside and inside with his lighting scheme, he also joined the fine with the applied arts in his displays. This too was undone in the twentieth century, as the best paintings were plucked out for the main route, and the sculpture, furniture, weapons, glass and jewelry, of which the Rijksmuseum has world-class collections, were relegated to corners that were visited only by specialists. The main exception to this rule was the department of Dutch history, which had greater visual and thematic variety than the main galleries. (The long-time head of that department, Wim Vroom, was also the first Rijksmuseum curator to bring the contemporary world into those hallowed halls, in a yearly commission to a photographer to document a specific feature of Dutch life.) 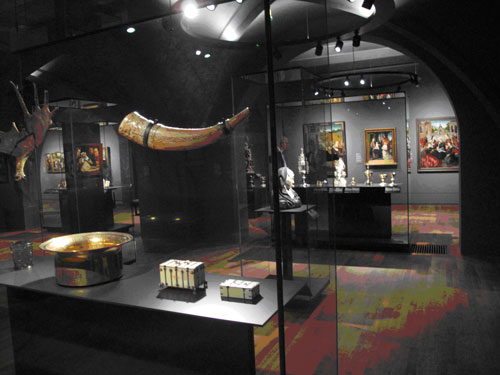 The transparency of the display is sometimes literal, as in this view in the section “1100-1600.” (Thankfully not labelled “medieval and Renaissance.”) Comparisons and contrasts of materials, types of objects, colors, functions, scale, are put at the disposal of the visitor, without imposing one or another conclusion. The generous spacing gives you room to have an object to yourself, close at hand, while allowing you, just by raising your eyes, to place it in a variety of contexts. The presentation is seductive without being insistent. When plans were announced to fit the objects into a “story” or “narrative,” I held my breath, out of worry that the displays were going to be forced to join a triumphalist march of Dutch art to its Golden Age. I can breathe more easily again. In part thanks to its sparing use of text, I found the presentation free of coercion or overinterpretation.

That the various aims get in each other’s way and that none can be completely achieved is apparent. That they come at a cost is inevitable. Historical information is sparse – the New Rijksmuseum cannot function as the historical museum of the Netherlands, as the director, Wim Pijbes, claimed a few years ago. Because the contextual materials are seldom the very ones belonging to the specific object on hand, they are more suggestive than authentic. The ensemble is very Dutch, emphasizing national identity instead of the international identity for which I vainly argued in 2004. The New Rijksmuseum cannot be consulted as readily as before for an exhaustive overview of certain types of paintings. With less space available, the curators had to make hard choices, relegating to storage former gallery pieces. Hopefully, the museum will be able to re-institute a study collection for the rest. 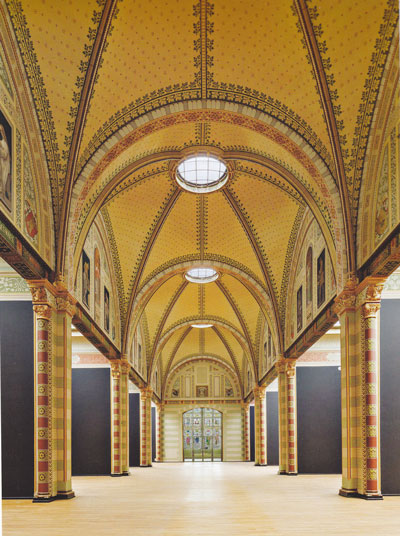 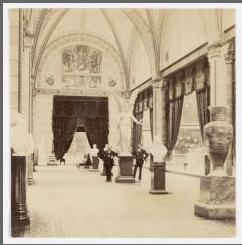 The Gallery of Honor in the New Rijksmuseum, before installation (with our backs to the Nightwatch hall), and a nineteenth-century photo of the same nave-like space, with appurtenances and displays)

Jean-Michel Wilmotte clearly adheres to a very different aesthetic than Pierre Cuypers. In most of the galleries, Wilmotte prevails, with rich, solid colors on wall and floor displacing Cuypers’s brighter tones and busily allusive signs and representations. In the Gallery of Honor leading to the Night Watch hall, where the two systems interpenetrate at maximum strength, you see what has been sacrificed. When the Cuypers Rijksmuseum was opened in 1885, entry to the cabinets and to the Night Watch hall was framed by vast, heavy draperies; the Italian terrazzo floor showed dividing lines that articulated the space; there were massive sculptures and vases on high socles in the nave; and the paintings were skied and closely packed, whereas now they are given lots of surrounding room. Only the architectural elements and painted decorations have been brought back into play, probably against protests from Wilmotte. The new look of the Gallery of Honor is therefore really new, more an appropriation of Cuypers than a restoration. Antagonistic critics who have said that the New Rijksmuseum is “more Cuypers than Cuypers” are talking through their hat. Throughout the building, choices like these had to be made, and not everywhere could the wishes of the curators, the restoration architect and the museographer be accommodated. The determining factor was the overall effect, and in this I cannot fault the outcome.

Whatever other wishes one may have for the New Rijksmuseum fall for the moment into insignificance next to the ravishing museum experience it now offers us.

On March 9th I opened a sales exhibition of prints by Albrecht Dürer and Rembrandt van Rijn at Christopher-Clark Fine Art in San Francisco. The text of the talk and its images can be seen on Schwartzlist documents.

Nowhere to be seen on Internet is the opening talk that I gave on March 22nd at the Bavokerk in Haarlem for the 100th anniversary exhibition of the Frans Hals Museum, Eye to eye with Rembrandt, Rubens and Titian. Just as well. Had it been filmed, you would have seen Her Majesty Queen Beatrix, seated opposite the chancel from which I was speaking, shivering from the bitter cold in the church.

From April 21st to 23rd Loekie and I will be in Vienna for CODART ZESTIEN, the sixteenth annual congress of the council for museum curators that I founded in 1998 and that held its first congress immediately after it was set up. The fifteenth anniversary will be celebrated in the fall.

There’s a lot of Zürich coming at me this year. In June I’ll be teaching at the University of Zürich Summer School Course in Amsterdam, in August I’m taking part in Zürich in a symposium on the language of art, and in the fall an exhibition on Persia and Europe is opening in the Rietberg Museum, for the catalogue of which I wrote two essays. Spooky or what?

Reactions are always welcome at Gary.Schwartz@xs4all.nl