In 1300 the first Holy Year was proclaimed, offering pilgrims to Rome attractive indulgence packets. This took place shortly after access to pilgrimage sites in the Holy Land was curtailed by the loss of Acre. Schwartz relates these events to each other and to the commissioning of Giotto’s depiction in St. Peter’s of the Ship of the Church, the famous Navicella.

On November 14th a younger American colleague, Alexander Nagel, is coming to the Netherlands to pay honor to the memory of an older Dutch-German colleague, Horst Gerson (1907-78), by delivering the seventeenth Horst Gerson Lecture. Not every departed scholar is remembered fondly enough to have an institution established in his memory, but Gerson was the kind of man who not only commanded respect but also elicited affection, from students and staff as well as fellow art historians. Having worked with him on his book Rembrandt paintings (1968), and having remained a friend of his, his wife Ilse, now 105 years old, and the Gerson children Hans, Flip and the sadly missed Suzanne, I gladly joined the board of the Gerson Lectures Foundation when it was set up in 1979. I have missed only one of the Gerson Lectures since, when I was abroad.

The theme of Nagel’s lecture I find downright exciting. Observing that “the scholarship on Renaissance art … from Giotto to Michelangelo … is still focused overwhelmingly on Rome and its legacy,” he will talk about how “much of the art produced during the period we call the Renaissance points in one way or another eastward, to Jerusalem, to relay points such as Constantinople, and to points beyond the Holy Land.”

As it happens, I have a theory that if it can be confirmed would be an early and weighty instance in the extension of the trend pinpointed by Nagel. That is, an attempt to substitute for an existing west-east set of institutions a west-west replacement. The theory concerns Giotto’s painting in St. Peter’s of Christ rescuing Peter on the Sea of Galilee, a painting that became famous under a sobriquet of its own, the Navicella. My theory brings historical and liturgical circumstances into the picture, in tandem with the iconographical, epigraphical and ecclesiastical issues that are already in play in the literature. 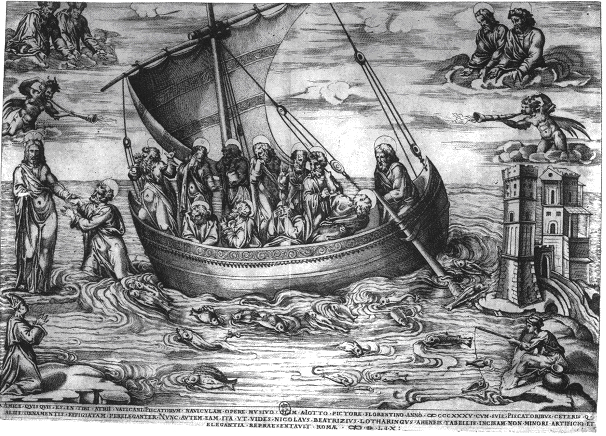 Nicolas Beatrizet (ca. 1507/15-after 1573) after Giotto, mosaic in St. Peter’s of Christ rescuing St. Peter on the Sea of Galilee. Engraving, 36 x 47.3 cm., 1559. The clearest image of the mosaic before it was reformatted, damaged and partly dismembered. It shows the composition in reverse, without the original inscription.

The representation shows a famous episode from the Gospel according to St. Matthew 14:24-33. It touches on some central themes of the birth of Christianity: Christ’s miraculous supremacy over nature; the essential importance of faith; the special relationship between Jesus and Peter; the first expression on the part of the apostles that they acknowledge Jesus as the son of God.

[24] but the boat by this time was a long way from the land, beaten by the waves, for the wind was against them. [25] And in the fourth watch of the night he came to them, walking on the sea. [26] But when the disciples saw him walking on the sea, they were terrified, and said, “It is a ghost!” and they cried out in fear. [27] But immediately Jesus spoke to them, saying, “Take heart; it is I. Do not be afraid.” [28] And Peter answered him, “Lord, if it is you, command me to come to you on the water.” [29] He said, “Come.” So Peter got out of the boat and walked on the water and came to Jesus. [30] But when he saw the wind, he was afraid, and beginning to sink he cried out, “Lord, save me.” [31] Jesus immediately reached out his hand and took hold of him, saying to him, “O you of little faith, why did you doubt?” [32] And when they got into the boat, the wind ceased. [33] And those in the boat worshiped him, saying, “Truly you are the Son of God.”

In the foreground of Giotto’s depiction of the scene, on the shore, is a kneeling donor, Cardinal Giacomo Gaetani Stefaneschi (ca. 1270-1343). The prelate earned his place in the composition by commissioning the mosaic from the leading artist of the day, for the princely sum of 2200 gold ducats. The choice of the subject could not have been a mere detail. In the storm on the sea of Galilee the saint to whom the main church of Christendom was dedicated enters into a closer tie with Jesus than the rest of the apostles. Here was a big step towards the founding of the Catholic church. A viewer of the mosaic would see the body and soul of the saint being saved before his eyes.

The date of the commission, execution and placing of the Navicella are unrecorded and are the subject of lively debate. The theory to beat at the moment is that of Tobias Leuker, who in 2001 argued for a dating not long after 1309. He bases this on historical circumstances and on the inscription that once underlay the mosaic. In 1309, after the accession of the French pope Clement V, the papacy left the Eternal City for Avignon, where it was to remain until 1376. In the inscription below, the donor beseeches Christ to return Clement or his follower to Rome, the only safe haven for the papacy.

My hunch is that Stefaneschi’s commission is related to two other events: the loss in 1291 of the harbor of Acre in the Holy Land to the Mamluks and the institution of the Holy Year in 1300. For the century preceding the loss of Acre, pilgrims wishing to visit Jerusalem and the other sacred locations in the Holy Land could sail on Christian vessels to a Christian port. From Acre they could proceed to a multitude of locations named in the Bible, where under protection of the Crusades they could earn indulgences piled on indulgences. With the loss of Acre, all of Palestine became a more dangerous place to visit, and a westward movement was initiated for the acquisition of indulgences. Acre itself became a richer source for this form of salvation.

According to my theory, which I have not been able to confirm in the literature, the institution in 1300 of a Holy Year for pilgrimage to Rome lay in the line of these developments. I find partial support in the entry in the Catholic Encyclopedia on the Christian Jubilee.

it seems difficult to reject the statement of Cardinal Stefaneschi, the contemporary and counsellor of Boniface VIII, and author of a treatise on the first Jubilee (“De Anno Jubileo” in La Bigne, “Bibliotheca Patrum”, VI, 536), that the proclamation of the Jubilee owed its origin to the statements of certain aged pilgrims who persuaded Boniface that great indulgences had been granted to all pilgrims in Rome about a hundred years before.

As I sense it, this constellation tingles with significance for the commissioning of the Navicella. What I see is the deliberate substitution of Rome for the locations in the Holy Land as a source for bounteous indulgences. That Cardinal Stefaneschi was a prime agent both for the institution of the Holy Year and the commissioning of the painting I regard as strong circumstantial evidence for this aspect of the meaning of the Navicella. In addition to whatever else it signifies, I read in the painting the following message: “Pilgrim, go no further. You who express your faith in Christ in the church of St. Peter in Rome are as eligible for salvation as those who sail the Mediterranean to the Holy Land. The Navicella at which you are gazing depicts the very Ship of the Church, the sole vessel sailing to eternal life.” That the message diverts into the coffers of the Vatican donations and expense money that until then pilgrims were spending elsewhere was also very much to the point.

This proposal seems so logical and promising that I am surprised that so far it has met only with skeptical responses from the specialists and non-specialists to whom I have pitched it. My hope is now invested in Alexander Nagel. In any case, please come to hear his Gerson lecture, which is preceded by an outstanding accompanying program and followed by a friendly reception.

From Sunday to Tuesday Loekie and I were in Geneva on business and touristic interest. We’ve been there a number of times before – I for the first in the late summer of 1959 – but it continues to fail to gel in our consciousness or capture our hearts. The place has a strange hollowness. The civic boast that the city lives from making absurdly expensive watches and from the banking business seems to be the plain, disheartening truth. Even the vielle ville, the wonderfully picturesque quarter on top of the town’s low hill, suffers from overrestored sameness. We did make one new personal discovery. Below the hyperprotestantized Cathedral of St. Peter, there is an eight-level excavation that is accessible via an astonishing complex of passageways.

In the past, remarkable things have had a way to happen on visits to Switzerland. On our last stay in Geneva, for example, we were having dinner with our friends Dario and Johanna Gamboni when he got a call saying that a fire had broken out in the art history institute where he works. We spent an hour standing in the crowd watching the fire. This time, I can say with a mixture of relief and letdownness that nothing exceptional happened.