Rembrandt’s last dated drawing and the painting that was on his easel when he died both depict the same subject – Simeon with the Christ child in the Temple – in much the same way. In honor of the memorable exhibition Late Rembrandt Schwartz publishes some thoughts on these exceptional works.

By way of great exception in the uncertain world of Rembrandt studies, we happen to know exactly for whom the master made his last signed and dated drawing and for whom his last painting. The information is as hard as it comes in 17th-century documentation. 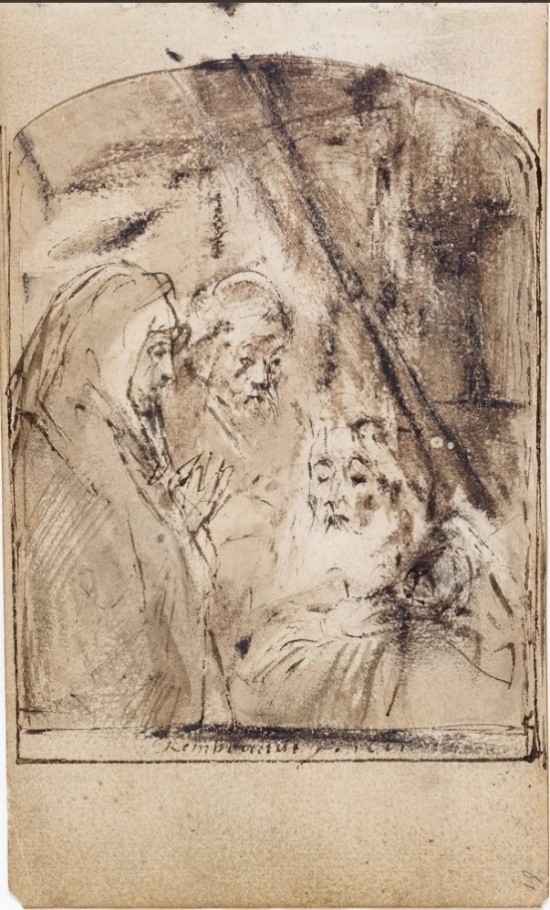 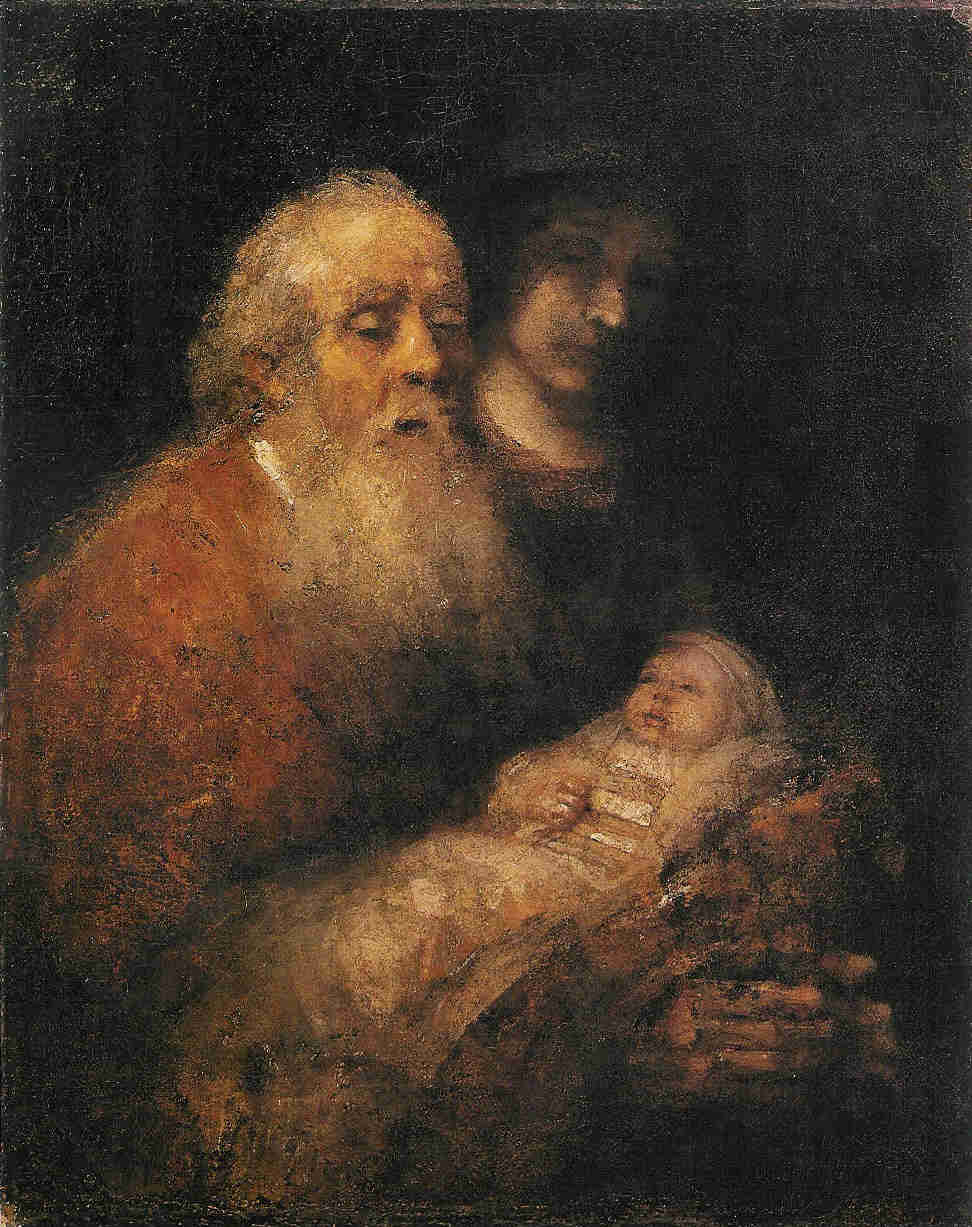 The drawing is on a sheet sewn into a bound friendship album for a known individual, the learned and culturally sophisticated rector of a Latin school in Amsterdam, Jacobus Heyblocq (1623-1690). (The link leads to the invaluable online National Library publication of the album amicorum, by Kees Thomassen and J.A. Gruys, with transcriptions and translations of the writing.) 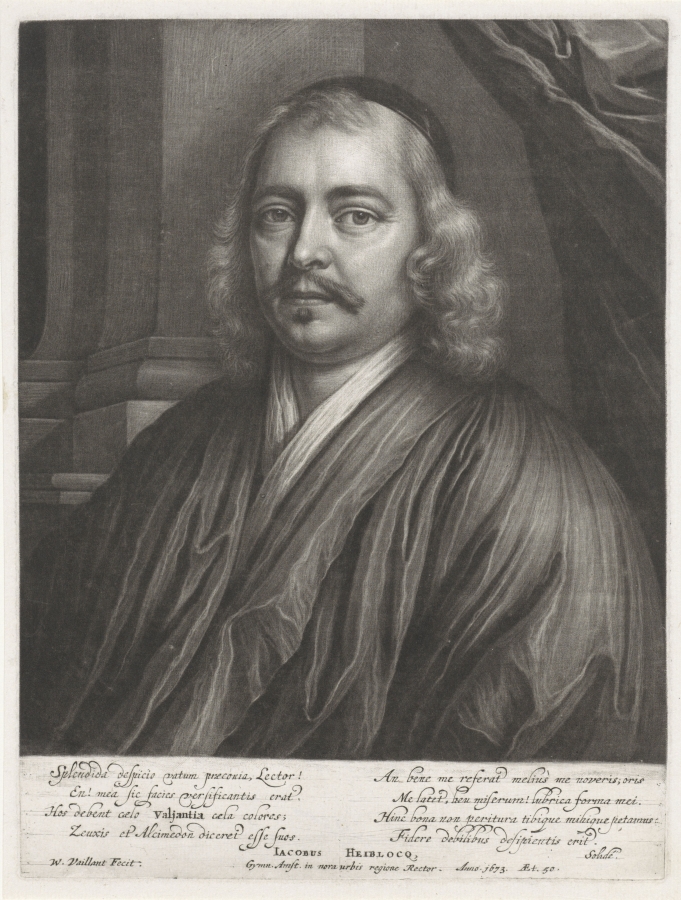 Heyblocq went to considerable effort to acquire high-value entries for his album, and sometimes solicited paired contributions if they added up to more than the sum of the parts. He did this in the case of Rembrandt’s drawing, requesting a poem on it from someone who signed only by his initials, AL. The main candidate for authorship is a former pupil of Heyblocq’s, the theologian and translator of English religious writings into Dutch, Arnoldus Lieranus (ca. 1637-1703).

The inscription reads, in translation:

To the reverend and learned minister Jacobus Heijblock.

Here Rembrandt shows us how old Simeon
Takes with joy his savior and Messiah in his arms;
And wishes now to die, because the sun of his grace
Has appeared, who protects all people
(trusting staunchly in him) against hell and eternal death:
This teaches that the pious are not at all afraid to die,
For death holds dread for evil ones, but is a helper in need for the good;
What then, o Heijblocq, can be more comforting to us?

The drawing, says AL perfectly reasonably, is less about Mary and Joseph and the Temple than about Simeon, old age, joy in the discovery of God, the blessings that the Christ child brings to those who trust in him, the terrors of hell and eternal death awaiting unbelievers, and death as a comfort to the righteous.

If Rembrandt’s drawing of Simeon in the Temple came into being as a gesture of friendship, his painting was a paid commission for the market. 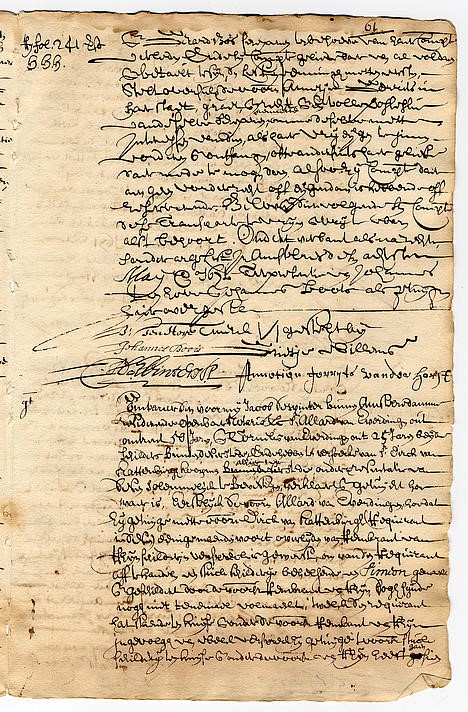 For an image, a transcription readable line by line under the original, and an English translation of the document (in principle – was not opening on 11 April 2015), see the page on the exemplary website of the Amsterdam city archive.

The patron who ordered the painting, which was unfinished when Rembrandt died, is identified in a sworn notarial document by two Amsterdam painters giving testimony at first hand concerning patron, artist and painting. He was a hardnosed businessman named Dirck van Cattenburch (1616-1704).

Drawing and painting are included in the outstanding exhibition Late Rembrandt, which ran in the National Gallery in London from 15 October 2014 to 18 January 2015 and currently at the Rijksmuseum, Amsterdam, from 12 February to 17 May 2015. In this column I offer materials and ideas not discussed in the excellent exhibition catalogue.

As different as they are in size, the compositions of the two works are similar. The main differences between them is that Joseph has been left out of the painting; the Virgin has been moved from front left to rear center; and Simeon is standing rather than kneeling. Interestingly, the Simeon in the painting resembles the Joseph of the drawing in pose and position.

In both works Rembrandt reduced the number of figures drastically, compared to his numerous earlier renditions of the subject. Gone are the cavernous spaces and appurtenances of the Temple that he once delighted to evoke, the priests, the prophetess Anna, the crowds. The few figures are given no context at all; they are thrust at us, spare, unmediated. Rather than defining the personages in dramatic light and dark, Rembrandt lends them an even glow, mysterious rather than dramatic. Forms are suggested rather than described. Costume is indicated with the merest marks, with no appeal to the sense of touch.

This approach was surely characteristic of the late Rembrandt, as visitors to the exhibition will see. But it also answers to the description of late style in the works of other artists. A theory concerning this phenomenon was developed by the Austrian novelist Hermann Broch (1886-1951), who was also a philosopher, a mathematician, a businessman and a political activist. Broch, who was born in 1886, fled from the Nazis to America in 1938 and lived there for the rest of his life. In 1947 he contributed an introduction to a book on the Iliad by a refugee from France, Rachel Bespaloff. Broch’s fascinating text had the title “The style of the mythical age.”

The “style of old age” is not always a product of the years; it is a gift implanted along with other gifts in the artist…: it is the reaching of a new level of expression, such as the old Titian’s discovery of the all-penetrating light which dissolves the human flesh and the human soul to a higher unity; or such as the finding by Rembrandt and Goya, both at the height of their manhood, of the metaphysical surface which underlies the visible in man and thing, and which nevertheless can be painted…. [The] “style of old age” is a radical change…, not merely a development in the original direction; and this sharp stylistic break can be described as a kind of abstractism in which the expression relies less and less on the vocabulary, which finally becomes reduced to a few prime symbols, and instead relies more and more on the syntax.

Broch lays down a very heavy claim for the status of the late style, one of the furthest-going claims ever made for the significance of art in general.

The artist thus graced and cursed with the “style of old age” is not content with the conventional vocabulary provided for him by his epoch. For to render the epoch, the whole epoch, he cannot remain within it, he must find a point beyond it…. His main, sometimes his sole concern is one of craftsmanship… But although the artist’s problem seems to be mainly technical, his real impulse goes beyond this – it goes to the universe; and the true piece of art … must always embrace the totality of the world, must be the mirror of the universe, but one of full counterweight. This is felt by every true artist, but is creatively realized only by the artist of old age… The abstractism of ultimate principles joins hands with the abstractism of the technical problem: this union constitutes the “style of old age.” The artist who has reached such a point is beyond art… his abstractism is … very near to that of myth…. Both myth and the “style of old age” become abbreviations of the world-content by presenting its structure, and this in its very essence.

Reading this with Rembrandt’s images before us I find a powerful experience. Rembrandt’s last pictures indeed exemplify something we can call abstractism. The forms are anything but descriptive. Conventional iconographic vocabulary is kept to a minimum. Broch’s remark about the limits of craftsmanship and technique is also highly apposite. In their subject matter these pictures quite literally embrace the totality of the world, God himself. For Rembrandt and his contemporaries, no myth had more power than the Incarnation. The moment of Simeon’s recognition of Christ was a moment when man went to the universe.

After these exalted words, which I intoned in the auditorium of the Louvre in January 2007 during a far longer lecture on Rembrandt in the series Le dernier oeuvre: de la maturité en peinture, and the following month at the Johannes van Tilburg Lecture at UCLA, there is something more down to earth to say about Rembrandt’s last painting. The finish of the painting, even taking into account its incompleteness, has always been troubling. A break in style and quality is seen between Simeon and the Christ child on one hand and the Virgin on the other. Sometimes the foremost figures are attributed to another hand, sometimes the Virgin. The issue must now be readdressed, following a revelatory small exhibition currently running, until 31 May 2015, in the Gemäldegalerie of the Staatliche Museen zu Berlin. 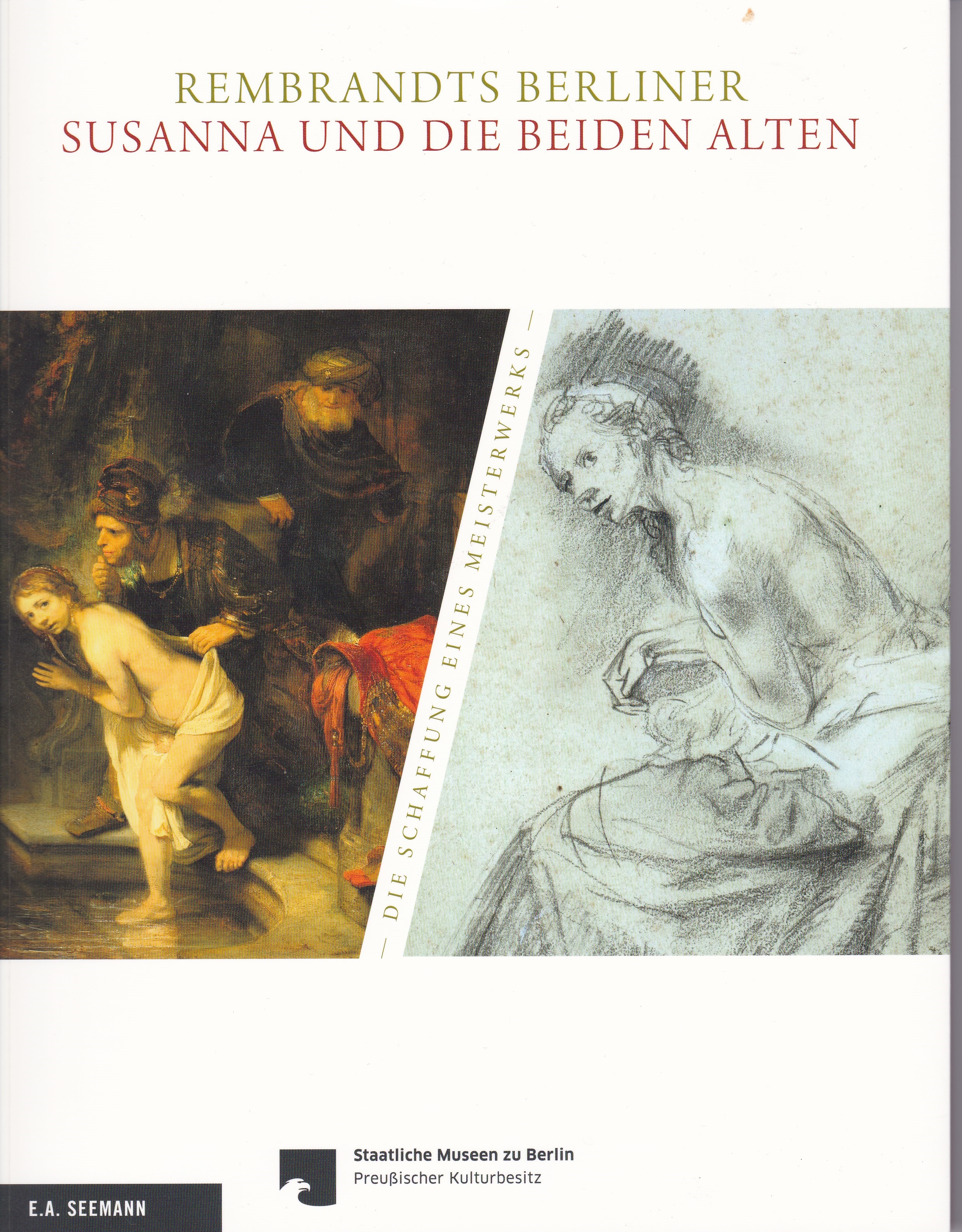 The subject is Rembrandt’s painting, in the museum, of Susanna and the elders. The Berlin curators and restorers have made the disturbing discovery that a former owner of the painting scraped off large parts of the surface and replaced them with his own handiwork, in addition to retouching much of the rest of the painting. That owner was the same man who also once possessed the Stockholm Simeon and the Christ child in the Temple. The culprit in question was none one other than Sir Joshua Reynolds (1723-1791). Considering himself at least the equal of Rembrandt, he saw nothing wrong with improving on the master’s work. This finding demands that a fresh, critical look be taken at the no fewer than ten other paintings by or given to Rembrandt that belonged to Reynolds. Until then, all suppositions, including those above about the level of craft in the Stockholm Simeon, are on hold. To be followed.

© Gary Schwartz 2015. Published on the Schwartzlist on 12 April 2015. On 20 April the correct name of the lecture series in the Louvre was supplied, thanks to Amy Ione.

On the 28th of March three sessions were held at the annual congress of the Renaissance Society of America in honor of David Freedberg. Every five years RSA holds its congress in Europe; this time it was at the Humboldt University in Berlin. At first I had agreed with the organizer of the sessions, Claudia Swan, that I would serve as respondent in one of them. However, when a speaker in another session had to cancel, she asked me to fill in with a talk, and I’m glad she did. I spoke on “Emotion studies from Giambattista della Porta to David Freedberg,” fitting David into a venerable tradition. If his work on the neuroscientific basis for response to art is as good as everything else he has done, he will bring about a revolution in the humanities.

On 12 May I will be delivering the seventh Golden Age Lecture for the Centre for Golden Age Studies of the University of Amsterdam. The lecture is to be held in the university auditorium in the Lutheran Church on the Singel, one of my reasons for accepting the invitation without the hesitation that was called for. The title is “A pregnant past: the Dutch seventeenth century in the global twenty-first.” All are welcome.

11 November 2018: The published lecture is available in Open Access.