Key features of the art of Jheronimus Bosch are illuminated by a book published in the Netherlands in the artist’s early years. Raymond Sebond’s Natural theology, or Book of the creatures, can help us understand what God was doing with a book at the creation and why the Garden of earthly delights looks so unnatural.

On the left outside wing of Jheronimus Bosch’s extravagantly colorful Garden of earthly delights is a small white-and-gray detail that intrigues me as much as anything else in the triptych. Above the firmament he is creating sits God the Father, wearing a papal crown. That is as it should be. Hartmann Schedel also depicted God that way in his Weltchronik (1493). The detail that gets to me is that God is holding a book on his knee, which isn’t there in the Schedel. A book! Surely it wasn’t a manual on the contents of the box and instructions on how to assemble them. What is it then? 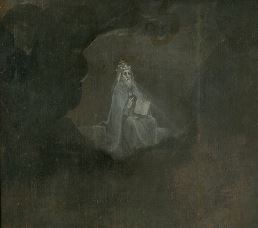 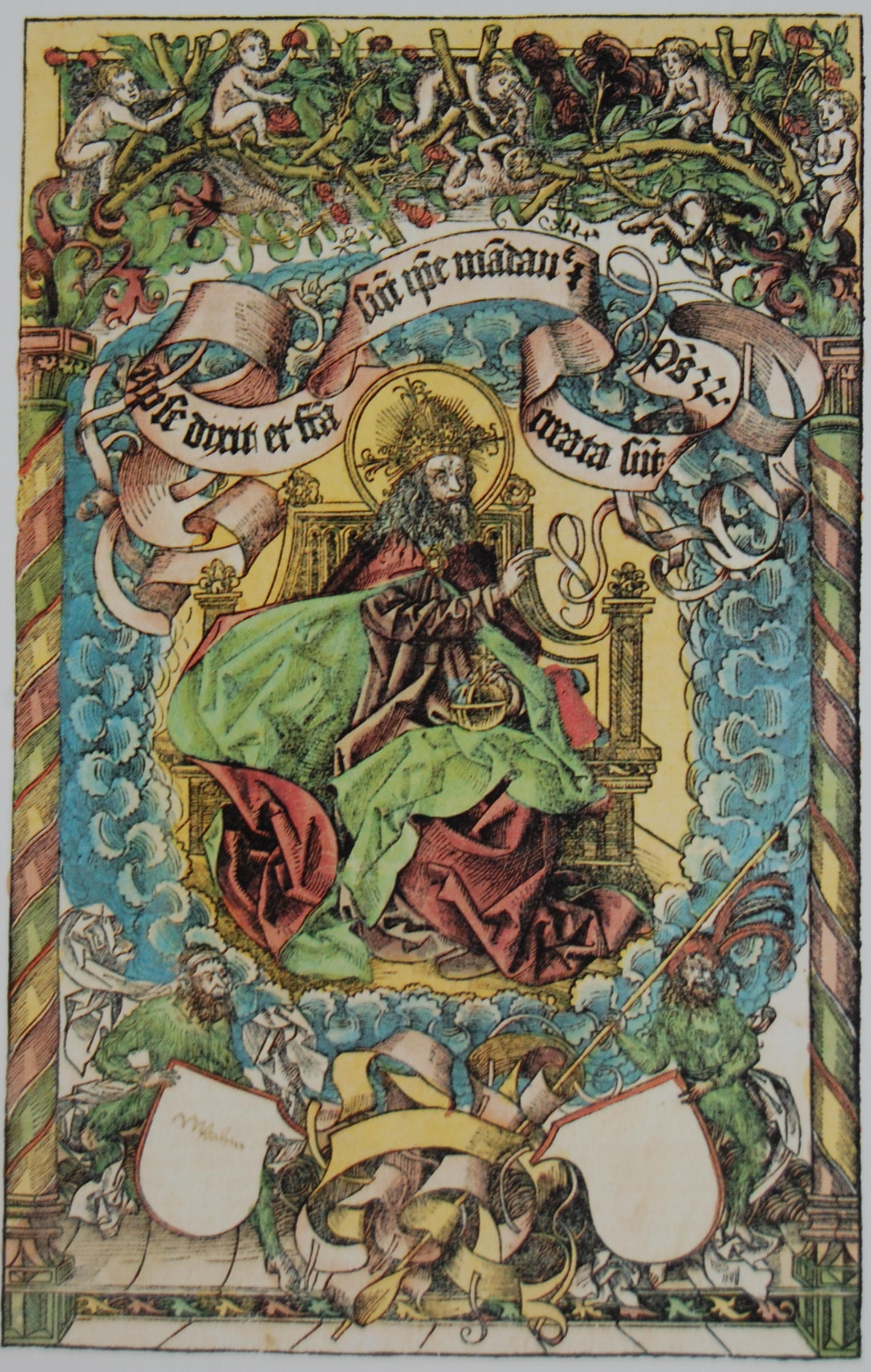 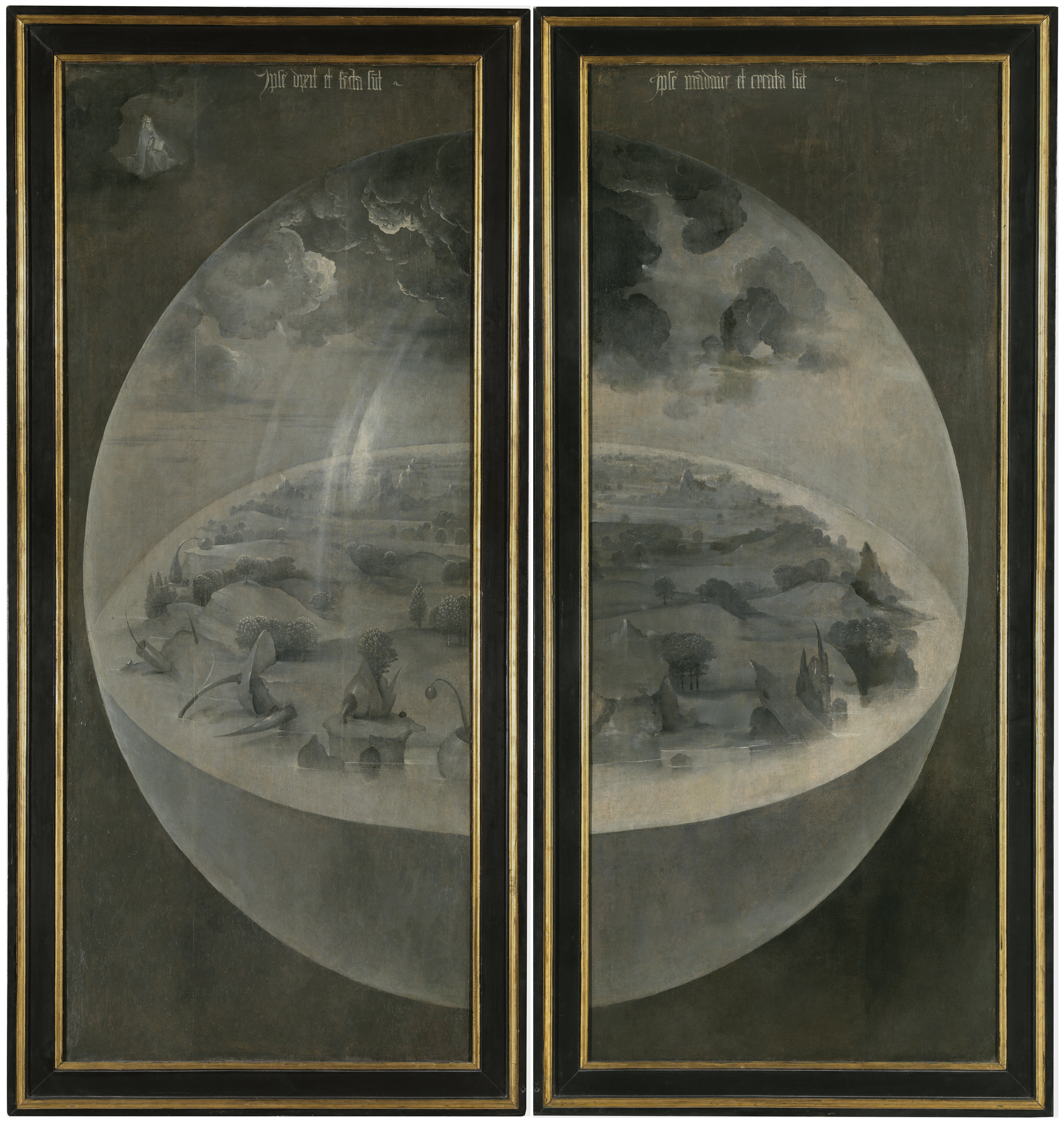 Researching this problem for a book I am writing on Jheronimus Bosch (ca. 1450-1516), I did not come across any suggestions in the recent literature, where God’s book is not specifically mentioned. In a draft chapter, I wrote:

The image seems to illustrate the opening words of the Gospel according to St. John, “In the beginning was the word, and the Word was with God, and the Word was God.” The priority of the spoken word finds expression in the Latin text on the outside wings: “Ipse dixit et facta sunt | Ipse mandavit, et creata sunt” (For he spoke, and it was done; he commanded, and it came into being). The word, the Logos, therefore preceded Creation, and if we take St. John literally, existed as long as God himself.

As fitting as this seems, it does not show how the Logos is linked to other features of the triptych. There are words being spoken by God to Adam and Eve on the left inside wing, but otherwise there is no hint of text in the painting.

Then I came across an actual book of God’s that does offer a meaningful connection to the overwhelming interior. That is, the Book of Nature. In the centuries preceding the time of Bosch, the conviction gained force that the natural world was a source of divine revelation just as the Bible was.  A major claim for this view of the world was made in a book published for the first time in the Netherlands in the early 1480s, when Bosch was in his thirties. The book had the programmatic title Theologia naturalis, sive Liber creaturarum (Natural theology, or The book of the creatures). The first edition was published in Deventer by the leading printer Richard Pafraet (1455-1512), whose philosophical, historical and theological imprints made a splash all over Europe.

Natural theology was quickly picked up by other publishers and remained in print down to the nineteenth century. The author was the Spanish or Catalan physician and theologian Raymundo de Sabunde (ca. 1385-1436), known in English as Raymond Sebond. The book is a pedagogical and somewhat pushy digest of patristic teachings, especially the Summa theologica of Thomas Aquinas. Sebond sells it hard in the prologue as a one-volume companion to the Bible that in a month can provide the reader with all he need know about assuring eternal salvation. It was deemed so important by Michel de Montaigne (1533-1592) that he translated the 900-page book into French (“I had nothing else to do anyway”) and wrote his longest essay on it, “An apology for Raymond Sebond.” It came to my attention in M.A. Screech’s annotated English edition of the Montaigne essay, in Penguin Classics (1987).

The notion that nature is one of God’s two books is older than Sebond, but Natural theology gives a concrete turn to the idea.

God has given us two books: the Book of the Universal Order of Things (or, of Nature) and the Book of the Bible. The former was given to us first, from the origin of the world: for each creature is like a letter traced by the hand of God: this Book had to be composed of a great multitude of creatures (which are as so many “letters”); within them is found Man. He is the main, the capital letter.

The two books have the same message, and the Book of Nature is in principle as sure a guide to salvation as the Bible. However, after the fall of man the letters became confused and the message illegible. From then on no one lacking knowledge of and belief in the Second Book, the literal revelation of the Bible, could be saved. Sebond applies this argument to the Greek and Roman philosophers all of whose vast knowledge was insufficient on account of their ignorance of the Christian God. However, it could equally pertain to the mineral and organic forms of creation, which in the Garden of earthly delights follow a different “Order of Things” than the world we know.

Sebond’s understanding of the nature of man also has its match in Bosch’s triptych. “The first [nature of man, the body] revels in luxury [and] is filled with vice and corruption, which condemns us to eternal damnation.” (P. 662 in Montaigne’s translation.) In the central panel of the Garden of earthly delights, soulless mankind is luxuriating in vice, and its right wing, it suffers the punishments of hell.

Richard Pafraet derived his theological know-how from the learned humanists of the Deventer Latin school, run by the Brethren of the Common Life. There can be no doubt that Natural theology was available upon publication in Bosch’s own city, ‘s-Hertogenbosch, where the Brethren were established since 1425. As a (Latin-reading) layman’s guide to theology, with an emphasis on the natural world as a source of revelation, Sebond’s book would have been a welcome aid to a painter of ecclesiastical art like Bosch. The metaphorical language of the book, its constant comparison of divine essences to natural phenomena, its doctrine of the de-alphabetized confusion of creation, could have inspired the artist to create those famously unintelligible images of his own.

As in so many other theories about Jheronimus Bosch, this one too cannot be proved and would be difficult to disprove. Nor does it eliminate many of the other theories concerning Bosch and his work. They have to co-exist, or as Reindert Falkenburg cogently argues, pile up on each other. As much as I would like to claim that the above forms the first introduction of Raymond Sebond into the scholarship on Jheronimus Bosch, I cannot do so. The literature on the artist is so vast that I cannot be sure that no one before me has hit upon this possible source. The issue is vexated annoyingly by a particular problem. Some of the main books to which one turns for illumination on the theology of Bosch have been published without indexes. If Paul Vandenbroeck or Jos Koldeweij or Reindert Falkenburg has brought Sebond into connection with Bosch, I beg their pardon and kindly ask them to provide me with a reference to the appropriate passage. The same goes for the authors and readers of all the other hundreds of books and articles on Bosch that I will not be able to read and remember.

On 12 May I delivered a lecture at the University of Amsterdam that has been made available online by Amsterdam University Press: A pregnant past: the Dutch seventeenth century in the global twenty-first. The page says that the title is not yet available, but it is. Just click on Download and it’s yours.

On 29 May I will be speaking (in Dutch) at a study day of the monthly Historisch Nieuwsblad. The location is the splendid hall of the Koninklijk Instituut voor de Tropen in Amsterdam. For this event, which lasts all day, there is an entry charge.

Circumstances have prevented me from attending two events this week in which I would have liked to participate. Yesterday was the annual members’ meeting of ICOM Nederland in the Centraal Museum, Utrecht, followed by a visit to the exhibition on Joachim Wtewael. I was too late in making up my mind to attend, and by the time I went to the site registration was closed. The same thing happened in connection with a high-quality celebration of Lodewijk Wagenaar’s 70th birthday, consisting of visits in the Rijksmuseum to a selection of objects in his field of Dutch-Asian studies. As enticing as these events were, and as obliged as I may feel to ICOM and Lodewijk, it is nonetheless right that I have stayed home and worked. I must train myself not to accept every nice invitation I receive. Invitations I always try to honor are those to funerals and memorial services. This month saw the sad and sudden deaths of Bob van den Boogert and Ank Leeuw-Marcar. Ank died in Bali, where she was cremated in the Balinese traditional manner. She will be commemorated in Delft on 29 May, in a service I will not be able to attend on account of conflict with the lecture above. To convey condolences, contact Ank’s sons Aram and Titus.