In the splendid Antwerp specialty of kunstkamer painting, one painting and one alone migrated from one environment to another, from the patrician collection of Cornelis van der Geest to the fabled one of the archdukes of the southern Netherlands. Schwartz has an idea why.

It was in the winter of 1965 that I had one of my precious talks with Jan van Gelder (1903-1980), professor of art history at the University of Utrecht. I had come to Utrecht in November with a Kress Fellowship to work on a doctoral dissertation in art history at Johns Hopkins University, bearing letters of introduction from H.W. Janson (1913-1982) to van Gelder and his colleague William Heckscher (1904-1999). Janson warned me that the two of them were not talking to each other (an understatement covering a monumental knock-down-drag-out battle) and to steer clear of their feud. That turned out not to be a problem. Both of them treated me with the greatest courtesy and helpfulness.

Talking about art history with van Gelder was wonderful. He was a treasure house of knowledge, insight and encouragement. He had worked on every aspect of art in the Dutch and Flemish Golden Age and was always pleased to share his knowledge with students while giving them the benefit of his frank judgments. On this occasion I told him about the new topic I had chosen for my dissertation, after abandoning the one I had started on. What I now turned to was the iconography of the kunstkamer painting, a seventeenth-century specialty showing actual or fictitious art collections, with and without narrative content. 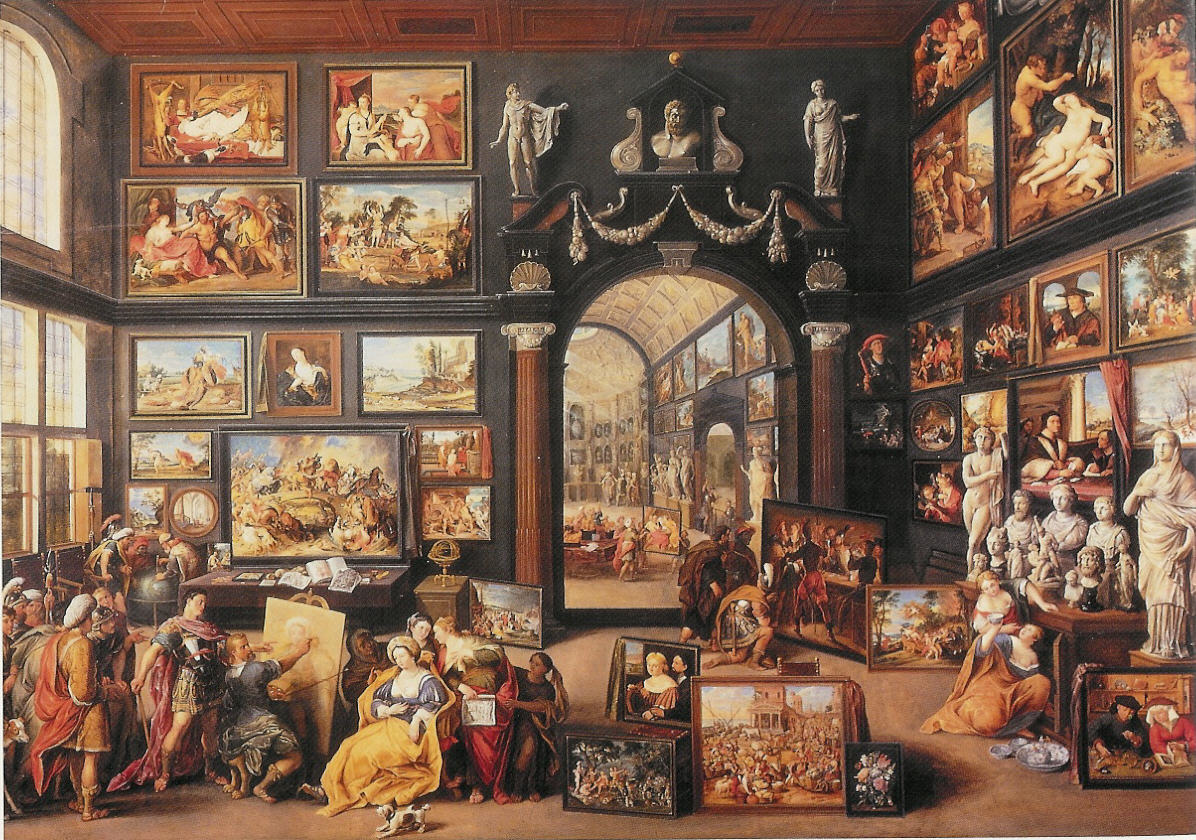 Working in The Hague at the Rijksbureau voor Kunsthistorische Documentatie (National Center for Art History), which was then across the street from the Mauritshuis, I frequently visited the museum. There I fell in love with Guillam van Haecht’s painting of Alexander the Great kibitzing as Apelles painted the portrait of his favorite concubine Campaspe. It seemed to me that the arrangement of the displays there and in the other kunstkamer paintings by van Haecht had more significance than had been realized until then, and I set out to discover it. Certain juxtapositions were suggestive of moral messages, a possibility that had been considered and rejected in earlier literature. Van Gelder liked the idea, and in discussing it with me he dropped a remark that struck me once and forever. “That’s the only specialty in art that was practiced in one city alone, Antwerp.” That observation gave new meaning not only to my subject but also to my view of the crucial relationship between art and society.

The dissertation was never written, and my work on kunstkamer paintings has not been as intensive as it might – as it should – have been. (See my article Love in the kunstkamer and my rather grumpy column on a kunstkamer exhibition in the Mauritshuis, with the most complete presentation of the work of van Haecht ever published.) It pleases me then to be able to add to the subject a find that links two of the founders of the genre, Jan Brueghel and Guillam van Haecht, and two great patrons of Flemish art, in a rather personal way.

On August 23rd of the year 1615, in his house on the harbor of Antwerp, the wealthy spice merchant Cornelis van der Geest (1555-1638) was honored with a visit by the rulers of the Spanish Netherlands, Archduke Albert of Austria (1559-1621) and Archduchess Isabella Clara Eugenia (1566-1633), daughter of Philip II of Spain. There was a certain practical reason for the visit. Van der Geest’s house afforded a view of a mock sea battle in the Scheldt River that the Archdukes wanted to see. That, however, is not what gave the visit its place in art history. 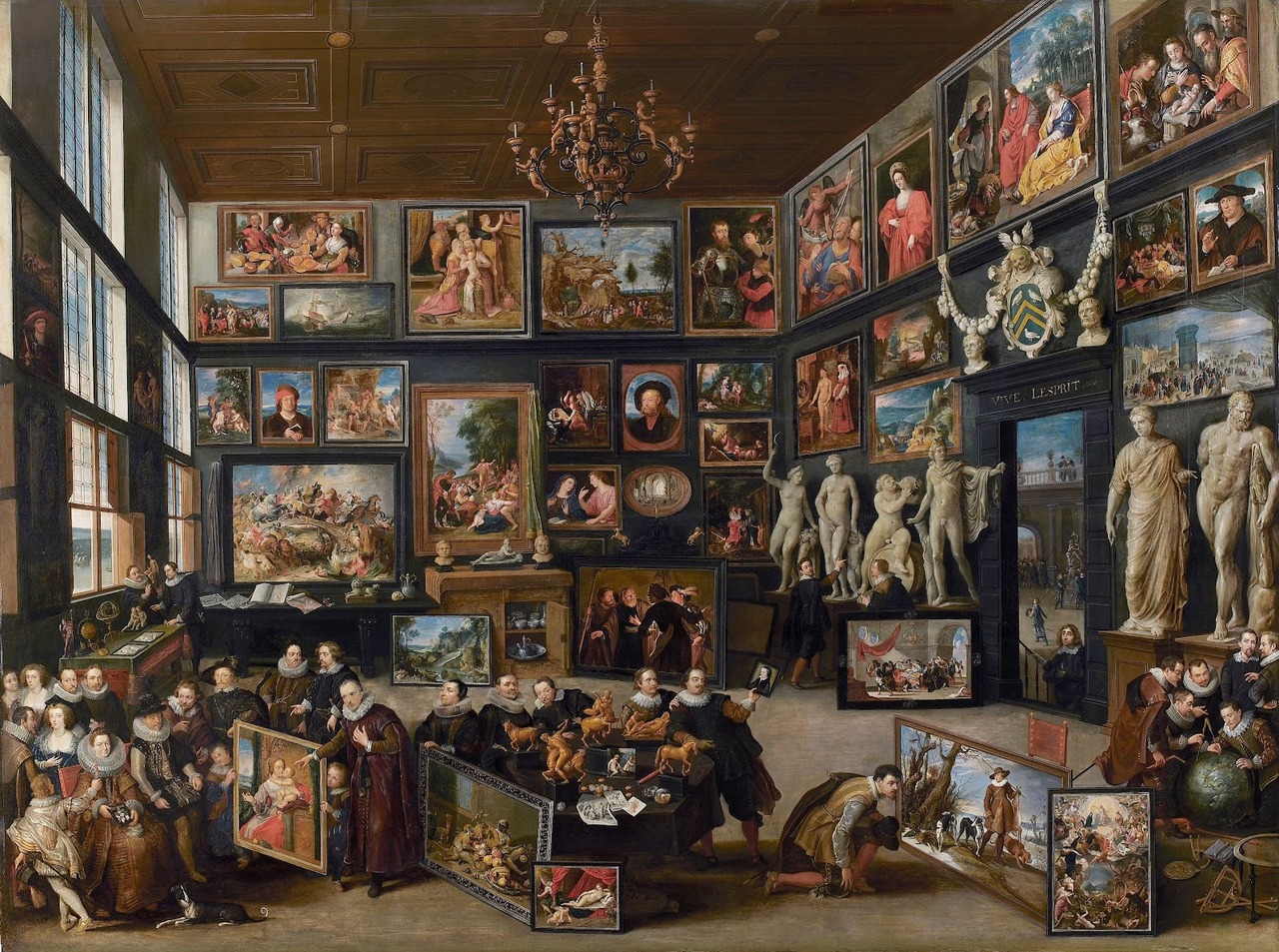 The occurrence that was to be immortalized in paint by van Haecht in the following decade and was still being written about nearly half a century later concerned a battle of the wills between the patrician and the prince. The dispute concerned one of the prize items in van der Geest’s famous art collection, which was the foremost motive for the visit. The event is described in these words by Alexander van Fornenbergh in 1658, forty-three years later.

A certain Madonna and Child by [the Antwerp master Quinten] Matsys once had as its owner the great art-lover Signor Cornelis van der Gheest: and when in the year 1615, on the 23rd of August, their Illustrious Highnesses Albertus and Isabella were in Antwerp and came to see the “Konst-kamer” of the above-mentioned vander-Gheest as well as a mock battle that was to take place on the Scheldt behind his house, the archduke so fell in love with this picture of Mary that he used all the means of the suitor to acquire the same. But since two minds with but a single thought were opposed to each other, the owner’s and the archduke’s, his Highness was rejected with the most respectful courtesy and [the owner’s] own love [or self-conceit; “eyghen Liefde”] prevailed above the favor of the prince. I believe that I have discovered a continuation to that story. The evidence lies in a painting that is depicted both in van Haecht’s Kunstkamer of Cornelis van der Geest (as well as in three other kunstkamers by his hand) and in an allegory of the Sense of sight that is laid out like a kunstkamer and furnished with objects belonging to Albert and Isabella. That work was created in 1617 by Jan Brueghel (1568-1625) and Peter Paul Rubens (1577-1640). The overlap has been noticed before, but it has not been realized that this is a unique case, the only painting to occur in both contexts, and that it has special significance. It is a half-length figure of a warrior in a strapped breastplate, holding a longsword in his right hand and wearing a large red cap. The painting has a Venetian look and has been attributed to the little-known master Domenico Mancini, though without solid grounds. You see it best to the right of the archway in van Haecht’s Apelles painting Campaspe in the Mauritshuis (left) and Kunstkamer with van Dyck’s Mystic Marriage of St. Catherine in the Bute Collection (right). In the Kunstkamer of Cornelis van der Geest it hangs high on the outside wall (left). And in the Brueghel/Rubens Sense of sight on the floor in the center (right).

The notion I wish to contribute to the discussion is that Cornelis van der Geest, in order to soften the blow of his refusal to part with the Matsys Madonna, presented Albert with his Venetian painting of a warrior. This speculation is strengthened by the placing of the painting in kunstkamers by van Haecht and Brueghel. In van Haecht’s Kunstkamer with van Dyck’s Mystic Marriage of St. Catherine the painting of the soldier is juxtaposed to a sculptural motif standing for the motto of Cornelis van der Geest: the dove of the Holy Spirit (in Dutch de heilige Geest). 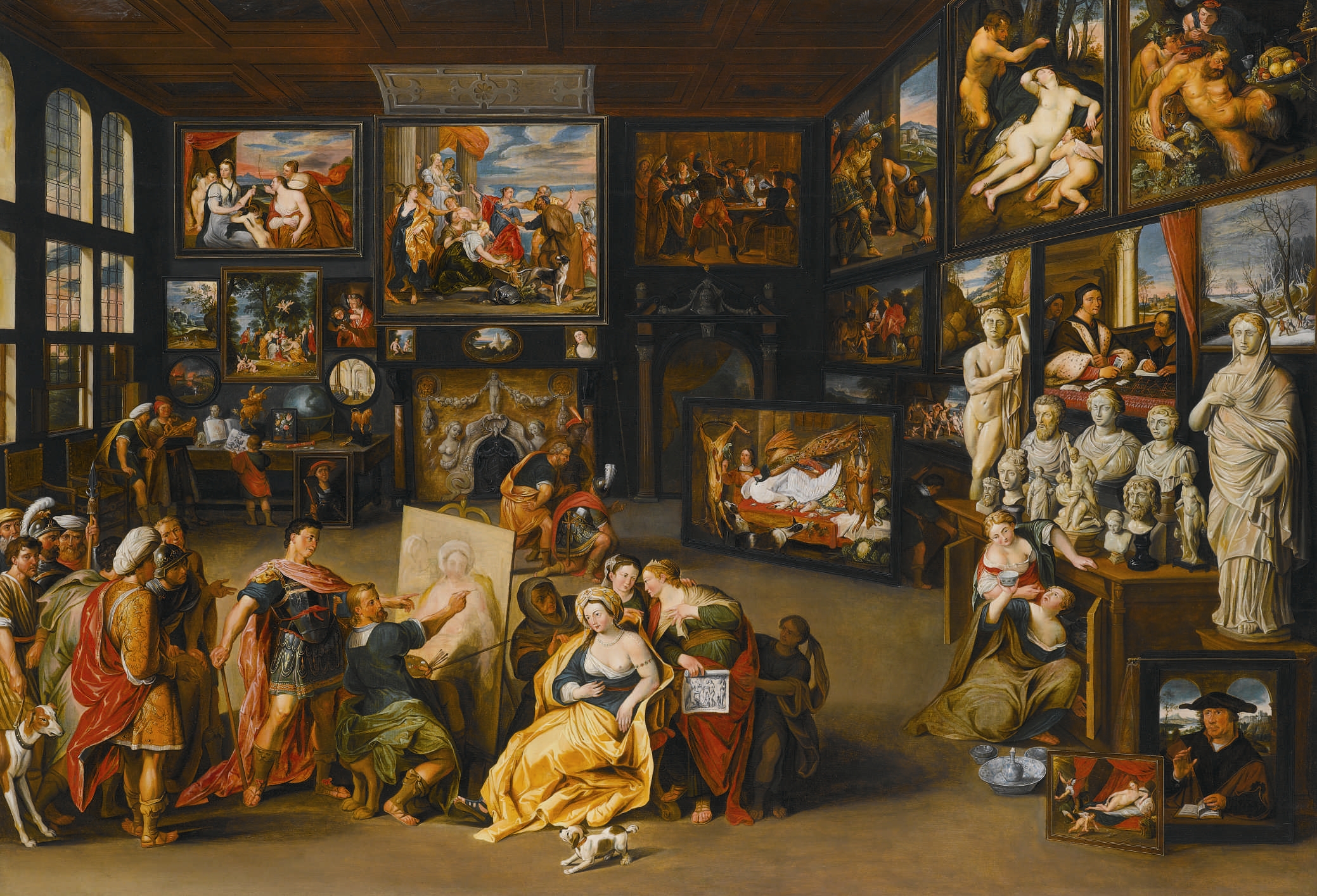 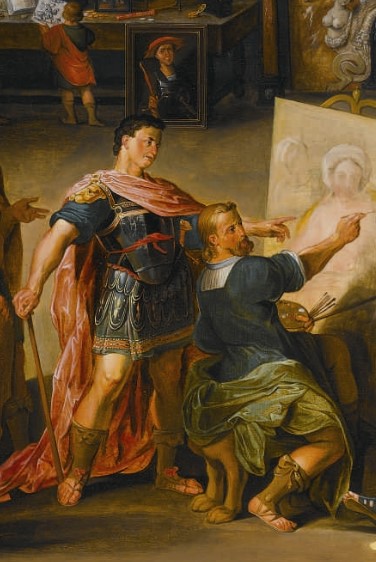 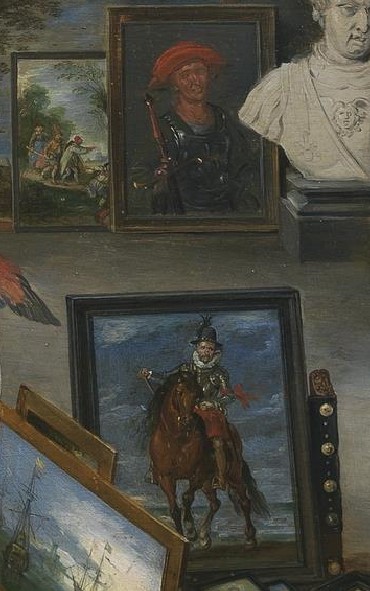 And in the Sense of sight it is aligned with Rubens’s equestrian portrait of Albert himself.

The Sense of sight is dated 1617, two years after the visit of the archdukes to van der Geest. If the Warrior in a red cap was a present from Cornelis van der Geest, its presence in the Sense of sight will have indicated that there were no hard feelings on the part of the archduke. After all, the diplomatic Rubens himself, a protégé of both van der Geest and Albert, was co-author of Sight and would not have put the Warrior above his own equestrian portrait of Albert if this were a problematic issue. I wonder too – admittedly with no evidence, only the need to account for the choice of this painting as a gift – whether the Warrior had not been a present from Rubens, after his return from Italy to Antwerp, to van der Geest, perhaps with an attribution to Giorgione, with whom Mancini is sometimes confused.

Although this could only happen in Antwerp, it echoed in Brussels, where the archdukes lived, and in Madrid, where the Brueghel/Rubens allegories of the senses soon entered the royal collection. The richly stocked kunstkamers of Guillam van Haecht, Jan Brueghel and their Antwerp coevals are an unending source of fascination and delight to any art lover who gets to know them.

© Gary Schwartz 2016. Published on the Schwartzlist on 31 July 2016. Revised on 8 August 2016 to include the details from the Kunstkamer with van Dyck’s Mystic Marriage of St. Catherine. With thanks to Elizabeth Honig, creator of the marvelous Jan Brueghel wiki.

The decision to write now about an idea that germinated decades ago was inspired by a visit to the Prado last month, where I was again enthralled by the series of the five senses by those great Antwerp masters. (The Prado does itself proud by offering on its website not only a complete entry on the painting, with a good enlargeable image, but also two short films (in Spanish) by excellent curators on the Sense of sight [Teresa Posada] and on the series of the five senses [Alejandro Vergara].) Our five days in Madrid were devoted mainly to the nineteenth congress of CODART, topped off by a morning visit to the Jheronimus Bosch exhibition in the Prado before it opened to the public and another to the exhibition Caravaggio and the painters of the North in Museo Thyssen Bornemisza. Loekie and I also enjoyed excursions to the Royal Palace of La Granja de San Ildefonso, with its spectacular garden and fountains, and the convent of the Descalzas Reales.

CODART held a high-level symposium on questions of connoisseurship. Fritz Koreny went furthest in sticking out his neck, showing a brilliant slide presentation demonstrating the differences he sees between two hands responsible for the core of Bosch’s work. He identified a left-handed artist as the Master of the Haywain, an artist of lesser gifts than the painter of the Garden of Delights. I was convinced, although I wondered whether, if he had started only with the Master of the Haywain or the Master of the Garden, the works he assigns to those hands would not also have lent themselves to further splitting. He was challenged from the floor by Pilar Silva, the Prado curator responsible for both triptychs. She does not buy his argument about handedness and accounts for the differences on other grounds than authorship. Her entry on The Haywain Triptych in the outstanding exhibition catalogue, in which Fritz Koreny wrote the entries on the drawings, opens with this unlikely claim: “The technical documentation now available on The Haywain Triptych in de Museo del Prado, referred to below, confirms without any doubt that it is an original by Bosch…” However, I did not find any technical documentation in the rest of the entry and cannot imagine how it could confirm without any doubt the “originality” of the painting.

I cannot refrain from giving a link to one of my own favorite columns, of summer 2003: “Summer spoilage.”

1 thought on “347 How a patrician made good for slighting a prince, maybe”