A masterpiece of seductive tendentiousness celebrated its 50th anniversary on 1 June 2001: Gerard Knuttel’s gorgeous De letter als kunstwerk (The letter as a work of art). Schwartz resist its charms with the help of 50-year-old memories of H.W. Janson’s insight into the anachronistic comparisons of music and visual art in LP and CD covers.

June 1, 2001 was the 50th anniversary of one of the nicest and most criticizable art books of the 20th century. De letter als kunstwerk (The letter as a work of art) is actually dated to the day on the title page: 1 June 1951. It was brought out to mark the 100th anniversary of the type foundry N.V. Lettergieterij <<Amsterdam>> voorheen N. Tetterode, which regarded 1 June 1851 as its founding date. The art historian Gerard Knuttel (1889-1968; he signed his writings G. Knuttel Wzn) was commissioned by the firm to write a book that would "show how the letter as a work of art has always helped to express the thoughts, feelings and ideals that have inspired humanity through the centuries."

This was a rather tendentious commission, which would probably be rejected by a present-day ethics committee on the financing of scholarship. A more scientific phrasing would have been: Is there a significant tie between the form of letters and contemporaneous works of art? Knuttel, then recently retired as director of the Haags Gemeentemuseum, did not let this bother him. He had always been convinced that artistic form reflected profound social and cultural values of peoples and ages, and there was no doubt in his mind that typographic form did so as well. With the generous backing of Tetterode he produced a stunning book.

Subtitled "Reflections and confrontations with other contemporaneous forms of art from the Roman period until today," De letter als kunstwerk is a hymn of praise to the spirit of the age and the spirit of the place. 60 double-spreads juxtapose cleverly chosen pairs of images from the same period and country. On the left is a carved inscription, a page from a book, or a type specimen, on the right a work of architecture, sculpture, furniture, painting or metalwork. The formal resemblances that Knuttel discovered are helped along by various typographical tactics. The variations in size between printed letters and elements of larger art forms are equalized by a book design that brings them into comparable scale. Differences in color and texture are neutralized by luscious black-and-white photogravure printing. 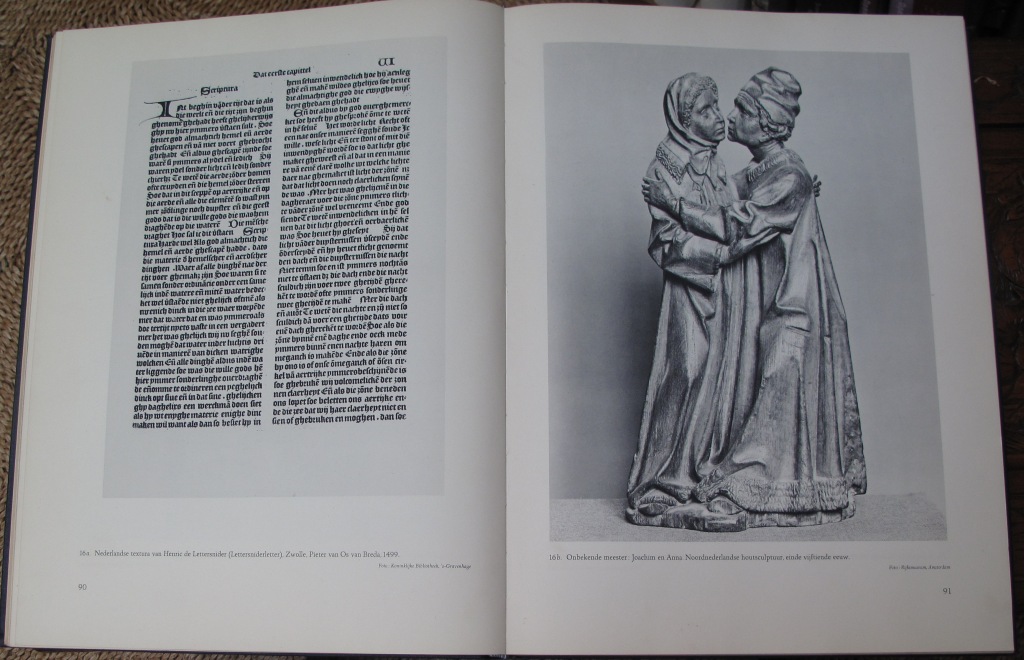 One example shows a page from a Life of Christ printed in Zwolle in 1499 opposite a Northern Netherlands wooden sculpture of Joachim and Anna of the same period. Two features of the sculpture that would have made the comparison meaningless had already been removed by collectors, dealers or curators: the rest of the altarpiece of which they formed a part, and their polychrome coloring. As it is, the two standing, embracing figures, silhouetted against a blank background, form an eloquent match for the two columns of type. The printing and the carving, writes Knuttel, both breathe the contemporaneous spirit of the religious movement known as the Modern Devotion. The letter "adheres willingly to the tried and true traditional form, unobtrusively well shaped, pleasing, striking the eye as just right."

The sculpture too "retains extreme sobriety;… all is pure, executed with great craftsmanship and feeling." To Knuttel these are properties that partake of a quality that "will always remain the deepest value of Dutch art – peaceful profundity." The visual comparison is truly moving, and it takes some effort to resist accepting it as valid evidence for the Eternal Dutchness that Knuttel reads out of or into them. Yet, that resistance is called for. De letter als kunstwerk is a highly manipulative publication, foisting off extremely refined choices as typical examples. 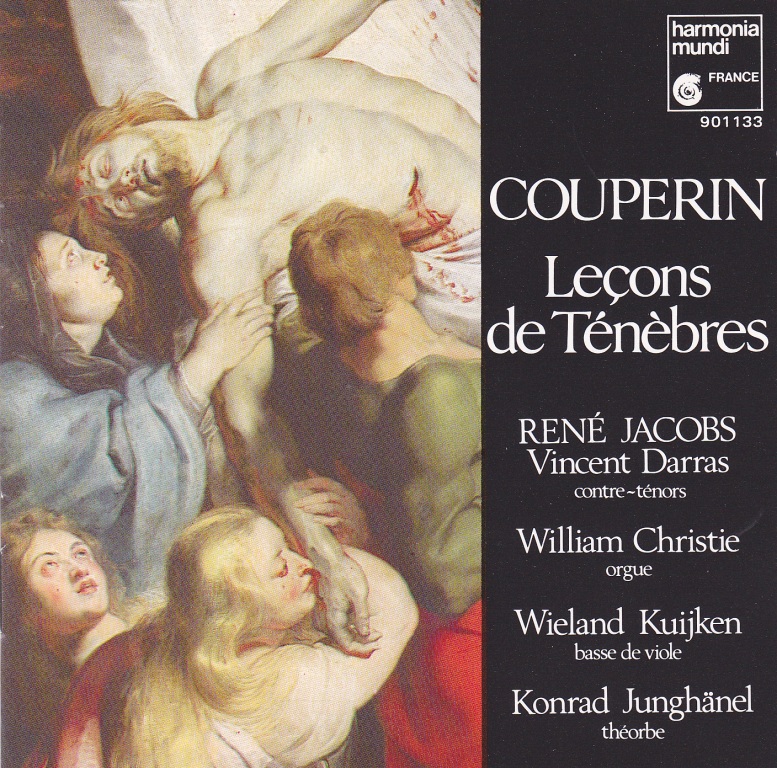 An antidote to the Zeitgeist worship in Knuttel’s book was provided to me in the same 1950s by my teacher H.W. Janson. In a throwaway remark that has remained with me ever since, he asked the class if we had ever noticed that the illustrations on LP jackets almost always show works of art earlier than the music on the record. It was true then, and has remained true since. A quick random sample of 20 LPs and 20 CDs in my collection showed that in 70% of the cases the period of the visual art was older than the music inside. For the LPs the art was 105 years older on the average, and for the CDs an even longer 135 years. Typical combinations were Schutz (1585-1672) and Palma Vecchio (1480-1528), Pergolesi (1710-1736) and Previtali (1480-1528).

This gap is institutionalized in the terminology of at least one period.
When art historians speak of Baroque art, they are referring to the period of about 1600-1700; to musicologists, the Baroque reaches its peak with Bach (1685-1750) and Handel (1685-1759) in the first half of the 18th century. Indeed, one of my Bach LPs is illustrated with a painting by Rubens (1577-1640), who was born 108 years earlier, the average distance maintained by the photo researchers of the record companies in the LP era.

Their successors in the CD business feel more comfortable illustrating Bach with paintings by the 250-year-older Rogier van der Weyden or with medieval stained glass. Handel, born the same year as Bach, has a younger image, making them think of Claude Lorraine (1600-1682) or Poussin (1594-1665), both of whom died before he was born. The weightless flamboyance of the Rococo style in art and architecture of the lifetime of Bach and Handel is somehow felt not to belong in the same arena as these heavyweights.

There are ways of trying to make sense of this, but I am not the one to do it. Speculative explanations of epiphenomena always bring out the skeptic in me, who needs little enough encouragement as it is. I prefer to cancel out the Zeitgeist proofs against the counter-Zeitgeist proofs and declare the whole business to be a matter of hineininterpretieren. Any artistic period of sufficient interest provides more than enough material for whatever kind of profound comparisons may appeal to you. In a period like our own, which simultaneously and with equal passion adores Vermeer and Caravaggio, Bach and Verdi, you have all the scope you need. Be my guest.

(c) 2001 Gary Schwartz. Published in Loekie Schwartz’s Dutch translation in Het Financieele Dagblad, 4 August 2001. Published on the Schwartzlist on 11 September 2013. Responses are always appreciated.
___________________
Sent off before publication, because we are off as well. To Paris tomorrow morning, to see the exhibition in the Louvre on the Sainte Chapelle and its treasury, which Loekie has studied intensively; and on Saturday morning to Normandy to visit friends, before driving home again on Monday. We are hitting the highways on one of those high-risk traffic summer weekends, which we otherwise never do. See if we can beat the odds.
____________________
Published on 1 August 2001 in the Frankfurter Allgemeine Zeitung: a German translation, by Matthias Fienbork, of FFDys 135: Enemies of patrimony.

You can support Gary Schwartz’s Internet activities with a donation.