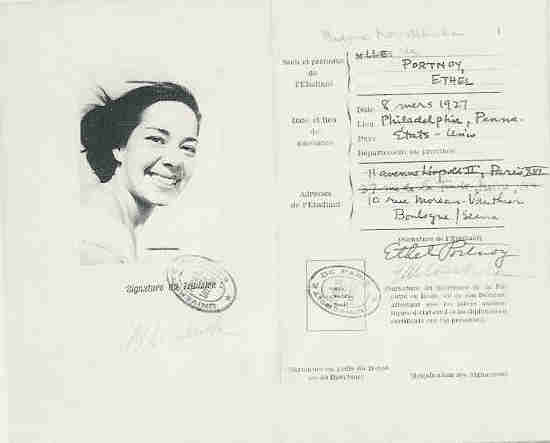 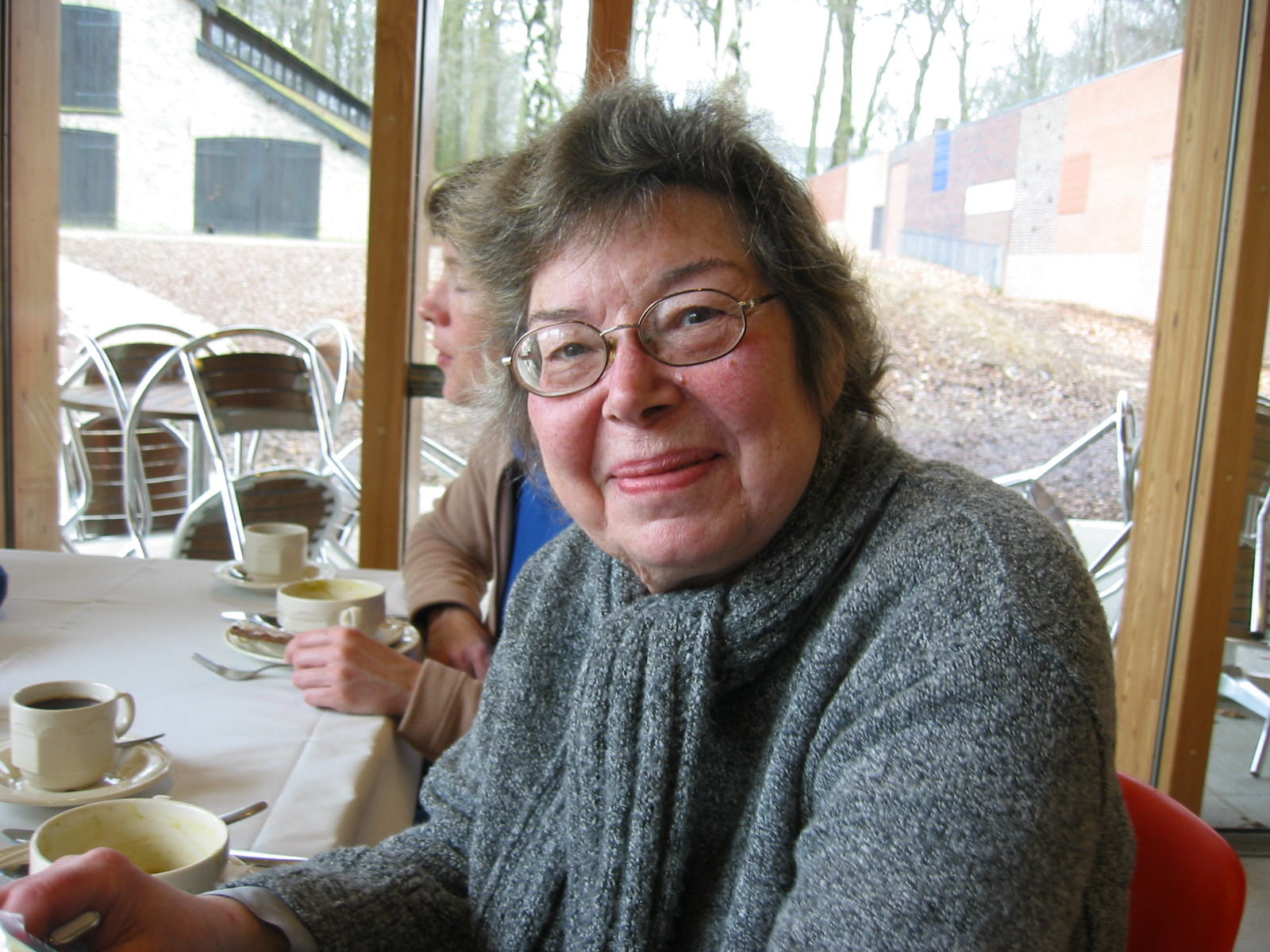 When the writer Ethel Portnoy moved from Paris to The Hague in 1970, she did not become a member of the American colony there. Availing herself of the openness that makes the Netherlands so attractive to newcomers from other countries – other Western countries, to be sure – she became part of the local scene, with Dutch friends, a Dutch publisher, a column in a Dutch newspaper. In Paris, where she lived for 20 years before moving to the Netherlands, that was not the case.

There, she was part of a foreign colony. Not the American one, but, thanks to her marriage in 1951 to the romantic young Rudy Kousbroek, of a small, bohemian Dutch colony. The friends from those years about whom she writes were writers like Remco Campert (whom she adored) and Simon Vinkenoog (whom she took with a grain of salt), artists like Corneille and Karel Appel (whom she had to keep apart in order to prevent fights about women) and writer-artists like Lucebert (of whom she stood in awe).

As was typical for foreigners in France, the income on which she and Kousbroek lived in Paris did not come from regular French employment. Ethel worked for UNESCO, Rudy published poetry, essays and criticism in Dutch for a Dutch public. This part of their lives normalized when they moved to The Hague, where they became a regular part of the culture and economy in which they worked.

That regularity did not amount to total assimilation. For years, his tie to France informed Rudy Kousbroek’s critical attitude toward the Netherlands. And as for Ethel – she created and played with a certain distance between herself and Dutch society. She would sometimes act the naïve American in a sophisticated Europe or, reversing herself without prior announcement, the world-wise cosmopolitan among the provincials of France or Holland. But she could also behave like the sensible Dutchwoman in fad-crazed, media-mad America. What she wrote about her Dutch surroundings (relatively little compared to what she had to say about America and France) has a certain quizzical detachment. The effect of mild but not unpleasant alienation is accentuated by another feature of Portnoy’s writing: she wrote only in English and published (at least in book form) only in Dutch. Although this is seldom acknowledged, most of her publications were collaborative translations by her and (until their divorce in the 1980s) Kousbroek or their daughter Hepzibah.

From her move to the Netherlands until her death last month, Ethel was a dear friend to my wife and me. In addition to our warm personal relation, she also saw to it that we were readers as well. We own every one of her books in a copy inscribed by her or sent to us by Meulenhoff or De Harmonie, her two publishers, “at the request of the author.” Although we met not as two expat Americans in Holland, but through my contact with Rudy Kousbroek, our background formed an additional bond. Our copy of Ethel’s first book, Steen en been, is inscribed: “To my landsman and friend, so far from home, Gary – from Ethel and to Loekie, affectionately – “

The land of which we were landsleit is of course America. Behind that shared identity lies however another, less obvious, European homeland. When American Jews call each other “landsman,” they are referring to the part of the Old Country where their families lived. Ethel Portnoy and I, whose families came from eastern Europe, reversed the movement from east to west. When Ethel left the United States in 1950, her family had been there for only 34 years. She lived in Europe for over 50 years. Upon my move to the Netherlands in 1965, my father’s family had been there for 55 years, my mother’s only for 40. The American period in the family history of some Portnoys and Schwartzes – and of how many others, from how many other backgrounds? – was a passing thing. Our hybrid Americanness takes in a lot of 20th-century Europe.

Was Ethel Portnoy an American writer or a Dutch writer? As in so many other matters of contested identity, to ask the question is to answer it: she was both. Her pieces would not have been misplaced in The New Yorker, but she chose instead to publish them only here, in Dutch, for an appreciative local readership. In doing so, she created a literary personality of a fascination and importance beyond the sheer, considerable quality of her writing.

That importance is all the greater in a new century that has begun with an outbreak of mutual US-European antipathy that is unpredented in my experience. What makes this juncture all the more dangerous is that few Americans today are recent immigrants from Europe. They have no relatives with a foreign accent to remind them that most Americans are European immigrants. All talk of globalization aside, America regards itself increasingly as a world unto itself. Although Ethel Portnoy never wrote about globalization – she only wrote about people – her gracious, humane and witty fusing of her three or four worlds showed how the thing ought to be done.

I spoke of the combination of distance and intimacy in the language of Portnoy’s books. This extends to the tone of her writing as well. She succeeded in combining seamlessly two powerful voices that by rights should be mutually exclusive: the clinical onlooker claiming scientific validity for her sharp observations and the girlfriend sharing gossip with you in a chique café. She gave readers the feeling of being in the confidence of someone smart, superior, delightful and a bit mysterious. Writers with that gift need no other.

25 May: Attended a board meeting of the J. Th. Steenbergenfonds, a foundation that supports acquisitions of 17th-century materials for Amsterdam University Library (Universiteitsbibliotheek Amsterdam or UBA). We were shown a spectacular and very expensive object that the library would like us to buy for it. The meeting was followed by a unique get-together of another kind. The Steenbergenfonds is one of three bodies that provides funds for the library outside its normal budget. There is also the Prof. Mr Herman de la Fontaine Verwey Stichting and the Vereniging van Vrienden van de Universiteitsbibliotheek Amsterdam. For the first time, the boards of the three supporting organizations held a joint meeting. It was not a business meeting, but a first acquaintance. We were received very graciously in the office of the Librarian. The session began with a presentation by the new keeper of the Bibliotheca Rosenthaliana, Emile Schrjiver. The Rosenthaliana, a division of the UBA, one of the largest collections of Judaica in the world, and is one of the most widely consulted of the Special Collections. Schrijver showed and explicated a new acquisition to which all three funds had contributed, a volume with two manuscript Hebrew grammars from the mid-17th century, one by Menasseh ben Israel and the other by Isaac Aboab da Fonseca. (See the nice page on the acquisition on the website of the UBA: http://cf.uba.uva.nl/en/collections/rosenthaliana/grammars/.)

The librarian, Nol Verhagen, and the head of Special Collections, Judith Belinfante, told us about the plans for the new building for this division. The location seems outstanding, and it would be a blessing to leave the present building, an unhappy old-new compromise with a small, nasty entrance that is always clogged with smoking staff and students.

25 May: Loekie and I met at the farewell dinner for Ken Wilkie, editor of the Holland Herald for the past 35 years and an old friend of ours. I lauded Ken’s abilities as an art historian, in the form of his outstanding investigations on Vincent van Gogh. The dinner was at Het Gemaal, a restaurant in an old industrial building that still houses the pump that refreshes the water in the Amsterdam canals.

26 May: Participated in lively round-table discussion on how the New Rijksmuseum should deal with the issue of Dutch national identity. Agreed with Rijksmuseum beforehand not to publish on the meeting without prior consultation. I have a feeling this might be the subject of the next column. The location is another of those special spots in Amsterdam, the top-floor Koepelzaal of Felix Meritis, an 18th-century society on the Keizersgracht.

27 May: Annual dinner of Vierhouten, a publishers’ association that does nothing except to organize an annual dinner. The speaker was Hans Willem Cortenraad, director of the Centraal Boekhuis, a facility for storage and order fulfillment available to all Dutch publishers. Their truck fleet is now one of the largest in the country, and they use it for the delivery of office supplies as well as books. The usual arguments ensued, rather more heated than I expected. Cortenraad did not strike the right tone, combining a certain defensiveness with repeated assurances that he was being completely open, which he wasn’t. As a former small publisher, I was on guard when he began to talk about the excessive cost of keeping slow-moving titles available. He spoke with horror in his voice of books that sell less than ten copies per year. As I recall, for scholarly books on the backlist, ten a year would be good. I would not be surprised if 20 or 30 percent of the titles in Centraal Boekhuis sell at that rate. Until now, it’s been up to the publisher to decide whether or not to keep books in print. If Centraal Boekhuis starts making this decision for the publishers, lots of backlists will be decimated.

28 May: Ethel Portnoy’s friends were invited by her children to her house in The Hague, the afternoon before they flew her body to New York for burial in a family plot on Long Island. Once more saw Ken Wilkie, whose brother-in-law Martin is married to Ethel’s daughter Hepzibah. Loekie and I were among the first to arrive. We proceeded through the usual sequence of emotions at such gatherings – at first mournful, ill-at-ease, weighed down by the gravity of the event, then loosening up as more people arrived and more was eaten and drunk, ending in something like an everyday atmosphere, feeling by the time we left a kind of release. That’s what it’s about, I suppose.

29 May: Delightful visit by the American art historian Andrea Kirsh, specialist in the physical examination of works of art. It was her first visit, and I deliberately took her into our house, on a warm evening, through Loekie’s garden. The astonishment on her face when she walked through the back garden door was wonderful to see. I recognize it, because I too feel like I have entered an enchanted realm whenever I cross that threshold. Andrea was an appreciative guest, taking her time looking with us at all our interiors and art as well as the garden, admiring them and discussing them with us. She warmed up our own feeling of contentment in our house.