In 1998, for an exhibition in Amsterdam and Paris, a team of art historians and archivists retraced Rembrandt’s footsteps in six walks in and around Amsterdam. Following the trajectory of Walk IV, on the Amstel River, Schwartz realizes that Rembrandt’s deepest wish was to have Holland all for himself.

You can’t say Rembrandt didn’t do his best. Between 1640 and 1655 he produced a series of masterly drawings and etchings of the countryside around Amsterdam that for all intents and purposes should have defined the look of Amstelland for posterity. He knew what he was after, or at least he knew what he didn’t want in his pictures.

He didn’t want traffic, he didn’t want crowds and he didn’t want villas. On his working walks out of the city, what he was after were empty rivers and roads, villages seen from a distance, farms and cottages half hidden behind protective trees. Although some of Rembrandt’s walks had as their apparent destination country homes and villas owned by friends and patrons of his from Amsterdam, Rembrandt never drew their proud domiciles and gardens. He wanted his countryside to look like the country.

To see how the tension between farmers and suburbanites was playing out on Rembrandt’s old turf, on Saturday, June 19th, I walked along the Amstel from the Rembrandt House to Ouderkerk aan de Amstel, looking around and taking pictures. The route I followed was Walk IV in the invaluable and endlessly instructive book by Boudewijn Bakker, Erik Schmitz and Jan Peeters of the Amsterdam municipal archives and Mària van Berge of the Institut Néerlandais, Landscapes of Rembrandt: his favourite walks (1998).

Given the gap of 350 years since Rembrandt stopped taking his walks in the countryside, I must say that it gave me a small thrill to find that the basic route was still there, in trajectories and even street names that have barely changed in the course of the centuries. It is still easy, and still a pleasure, to take that walk. There is not even that much traffic. Some years ago, the municipalities concerned closed off enough of the Amstel Dike for through traffic so that it is used only by locals and by bicyclists. 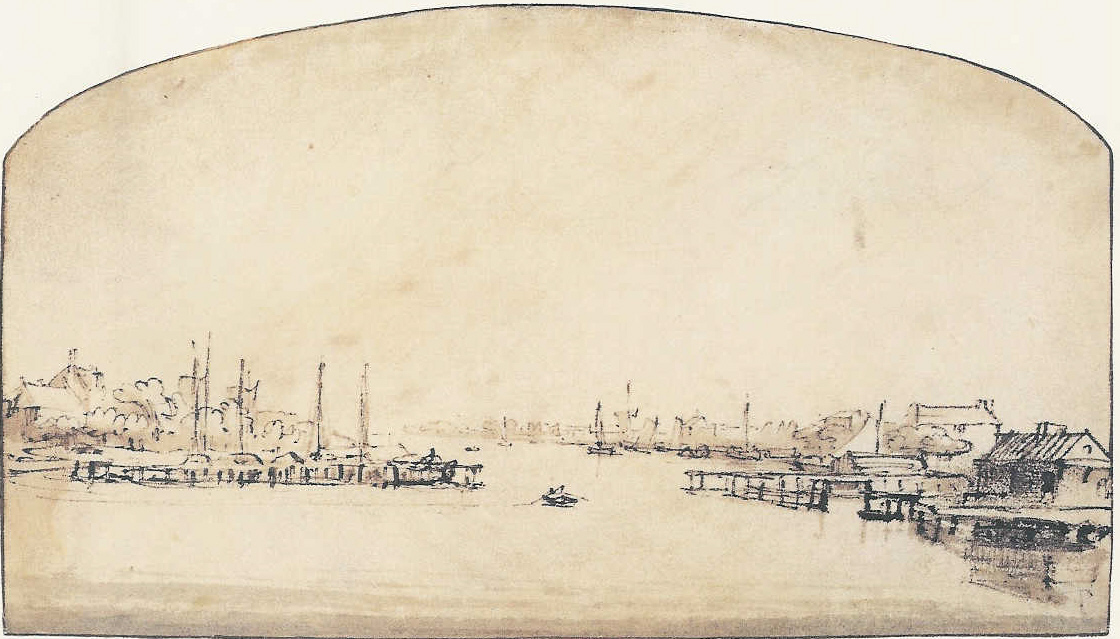 The beginning of Walk IV, in a Rembrandt drawing in the Rijksmuseum print room and in a digital panorama by Schwartz.

Considering what could have happened in the intervening time, it was a relief to find that so few bridges and roads have been built across and along the Amstel. They follow an order of increasing intrusiveness, from the (rebuilt) Magere Brug of the city fathers of the Golden Age to the Sarphatistraat of the 19th-century urban visionary, the 20th-century Stadhouderskade of the traffic manager, the Ceintuurbaan of the social planner, on to the architect’s Berlage Bridge, the highway engineer’s Utrecht Bridge, and culminating in that major infrastructuralist’s intervention, the triple-barreled A10, with a separate span for road traffic in each direction and a railway bridge between them. However, after that piece of planner’s bombast, from there on to Ouderkerk the only public transportation across the river is a small ferry for cyclists.

Somewhat to my surprise, I also discovered that much of the land on the banks of the Amstel is still lined by farms and parks. Nor is the road itself much different than it was 350 years ago, with its divided lanes for wheeled and pedestrian traffic, its small dimensions and its occasional country inn – the Minervapaviljoen at the beginning of the walk and the Kleine Kalfje a bit further on.

In terms of the afterlife of the Rembrandt look, however, I must say that the artist has not imposed his view of the Amstel on the ages. If there is still one 17th-century farmhouse on the river, it escaped my notice. What did claim my notice, in no uncertain terms, was the profusion of new houses pretending to be old. The ideal to which these farmlets and neo-country houses aspire is exactly the kind of building that Rembrandt rigorously eliminated from his Amstel.

If you can’t say that Rembrandt didn’t do his best, what you can say is that he overdid things. In fact, his Amstel never looked the way he shows it. During Rembrandt’s time several major road and canal projects took place around Amsterdam. The shore on the Weesperzijde was regularized and paved; the ring dike around the Watergraafsmeer was completed; the towing canal to Haarlem (Haarlemertrekvaart) was dug. Rembrandt waited until the building crews had finished their work and vacated the premises. If they did not clean up after themselves as neatly as he liked, he finished the work for them, on paper. In fact, there is no clutter of any kind in Rembrandt’s landscapes.

On the Amstel he drew and etched the dike along the river, the towpath for barges, the coach road, the pedestrian path and the river itself. But the barges that conveyed passengers along the waterways between city and city are not there. Nor does he show that typical feature of barge transportation that visitors commented on: the barges were so slow that passengers often climbed out of them and walked ahead on the shore, picking up their baggage at their destination.

The paths along the rivers and canals that connected Amsterdam to the hinterland were so busily travelled that the authorities put up stakes to protect pedestrians on the one side and towmen on the other from being run down by coaches. Rembrandt shows the stakes, but never the traffic that occasioned them. At most, he shows a single figure or a pair, the occasional horseman or two, or as in one somewhat solipsistic drawing, an empty village with a draftsman like himself sketching it. Where artists like Hendrik Vroom and Cornelis Claesz. Visscher showed city folk promenading on Sunday afternoons, mixing with their country cousins, there is no human interaction in Rembrandt’s depopulated landscape. Basically, he wanted Holland for himself.

Nor did he like his view of the water to be cluttered with commercial craft. The boats on his rivers are not of the ubiquitous kind that carry off garbage while removing filth and obstacles to keep the channels open, or delivery barges overloaded with agricultural produce or industrial half-products. He preferred sailing yachts and recreational rowboats, and he preferred them in the middle distance, singly. Rembrandt like peace and quiet. No bargeman’s chants ring out over his river, no crowds of holidaymakers shout to each other. Whatever human contact there is on his Amstel takes place between lovers in the bushes, very quietly.

Saturday, 19 June: Walked the walk described above. For the occasion, I bought a sport stopwatch and timed the stages of the walk. From his front door, Rembrandt could reach the Amstel in 6 minutes, the Buiten Amstel in 20 minutes the Omval in a bit over 40 minutes and Ouderkerk in less than two and a half hours. This knowledge, combined with the chronological bundling of his drawings around Amsterdam, creates the possibility that walking in the countryside was not a private passion of Rembrandt’s to be indulged whenever he could, but an efficient campaign to gather as many motifs as possible with the least investment of time. Am engaged in a correspondence on these matters with Boudewijn Bakker, who has embraced the private passion theory.

Sunday, 20 June: Sailed the Vecht on the S.S. Grazyna, a Polish boat that is now used for day trips on the river that flows in front of our house. Loekie was providing historical commentary on board for 120 Friends of the Foundation for Owners of Private Country Houses. This is Holland’s answer to the British National Trust, with the important difference that the Dutch Stichting PHB does not buy up country estates but helps their owners maintain them while continuing to live in them. My grateful job was to sell copies of Loekie’s book Langs de Vecht; part of the proceeds went to the Foundation. Did brisk business from my table amidships.

Tuesday, 22 June: Met with Wim Pijbes, director of the Kunsthal in Rotterdam, to talk about his plans for an exhibition of 17th-century paintings from the Rusche collection.

Wednesday, 23 June: Cocktail party at the Meulenhoff offices on the Herengracht for the contributors to the special European issue of De Gids. My article, “Johannes Vermeer was not a typical Dutch artist,” is mentioned and discussed. Not everyone agrees with me.

Wednesday, 23 June: Attended a John Adams Institute lecture by Walter Russell Mead, on America’s strategy for dealing with terrorism. Mead paraphrased the behavior of the Bush administration to make it sound like a reasoned plan. He sketched an offensively smug picture of the coming decades. There is something called the New Capitalism, he says, of which the US is the guardian and motor. The New Capitalism has a military branch, the operations of which we have been privileged to witness in Iraq. (“You can criticize America for how it got from A to B, but it got there,” Mead said, as if B were a good place for America to be.) The sooner the rest of the world gets used to this and accommodates itself the better. If Europe doesn’t get the message, it’s too bad for Europe. What Mead was saying, with excellent rhetorical skills, a disarming smile and coquettish references to his Marxist past and Democratic inclinations, amounted to nothing more than the line from every second crime film to come out of Hollywood: Do what I say and no one will get hurt.

Thursday, 24 June: Received the message from New York I had been dreading for ten days. My friend Bob Cahn died.

Thursday, 24 June: Opening in Brussels of a Flemish-Dutch cultural center, the Vlaams-Nederlands Huis. In Dutch, with French and English summaries, talks by Paul Van Grembergen, the Flemish Minister of Culture and other matters, and Medy van der Laan, State Secretary for Culture of the Netherlands. Papers were signed, drinks were drunk, opening exhibitions were visited. The director of the new institute was not introduced, nor was the program discussed. The Netherlands State Secretary for European Affairs, Atzo Nicolai, did not show up. Van Grembergen compared with friendly irony the 40-year long genesis of this plan to the voyage of Ulysses, referring to James Joyce as well as Homer. Van der Laan’s metaphor came from George Steiner, for whom European culture is like a coffee house.

Sunday, 27 June: Spoke at a memorial service for Bob Cahn. Text on request. My friend left a wife and two teenage sons with whom he shared exceptionally close emotional and intellectual ties. Heartbreaking.

Monday, 27 June: Flew home on the red-eye. Mercifully, got a window seat next to an emergency exit, with lots of leg room. With some pills from Loekie managed to get a few hours’ sleep.

Tuesday, 28 June: Visit to Laura and Peter Gatacre at De Wiersse, a country house in the Achterhoek. After a tour of the legendary gardens, among the most beautiful and soothing I have ever seen, saw part of the amazing art collection before dinner. That was all I could handle, will come back for more.

Wednesday, 29 June, Friday, 2 July: Intense discussions with chairman of the board of CODART and a member of the board; some critical problems seem on their way to solution.

Friday, 2 July: Watched a ridiculous movie on DVD with Loekie, From dusk to dawn, with George Clooney and Quentin Tarantino as serial killer brothers. In one sequence, Clooney goes through the above-mentioned routine with a woman hostage: “If you promise to do exactly what I say, you’ll get out of this alive. Do you promise?” She does. The next time Clooney sees her she is dead, having been raped and murdered by Tarantino.