Fleeing the offensive hypocrisy of the Olympics, Schwartz and Loekie travel to Wörlitz in Saxony-Anhalt, to the miraculous 18th-century Garden Kingdom of Prince Friedrich Franz of Anhalt-Dessau (1740-1817). There they discover that Wörlitz is touted as the place where the Olympic Games were first revived, in the 1770s. They keep their cool, and are rewarded, when they find the mysterious site, with an unforgettable experience.

My faith in society having been tested to the limit by the collective madness surrounding the disturbingly unpredictable European Soccer Championships and the all too predictable Tour de France, I thought it prudent to avoid the risk of losing it altogether through forced exposure to the self-satisfied bombast preceding the nationalistic and corrupt Olympic Games. The place to which my wife and I chose to escape was the furthest imaginable from the world of media hype. We came to Wörlitz and its Garden Kingdom, the enchanted domain in Saxony-Anhalt where European culture of the 17th and 18th centuries outdid itself.

“I have never left the garden of Wörlitz without experiencing a blissful peace of mind,” wrote Friedrich von Matthisson in 1795, and we wanted to say the same after our vacation here. The circumstances could not be better. The weather is dry and warm, we have a quiet suite in a comfortable hotel with good food adjoining the Garden Kingdom. The few other tourists, following the law of self-selection that gives every attraction the visitors it deserves, are also after the happiness of Matthissonian quietude.

The grounds and its buildings exceed our expectations. For three days we followed in the footsteps of Goethe and his host, Leopold III, Prince Friedrich Franz von Anhalt-Dessau (1740-1817), and in those of generations of other Friends of Nature and Art, to whom the Wörlitz Pantheon (now being restored) is dedicated. We lost ourselves in the labyrinth – not a maze but a tangle of high roads and low roads, warnings and good examples – before finding ourselves once more in the Elysian Fields, close to the library (now a gift shop, but they do sell books in addition to Wedgwood porcelain and plaster casts). In refreshing contrast to other such moralizing landscapes, in Wörlitz sensuality is not a path to be avoided in favor of anodyne piety. Sensuality and sexual desire are excited and encouraged by the dark corners and grottoes that alternate with the long views that open up unexpectedly at every turn. When you leave the hermit’s cell and the cave of the mystagogue, you are led to the Temple of Venus, built over a series of caverns in which you can give properly rapturous expression to your adoration of the goddess of love. The prince himself set a stirring example. On the way from Schloss Wörlitz to the Temple of Venus, in the Gotisches Haus, he installed his mistress, Luise Schock, the daughter of the gardener who designed the surrounding grounds. From the gardeners’ domain in the Temple of Flora, the way to the Gotisches Haus is pointed by a phallus-shaped flowerbed. 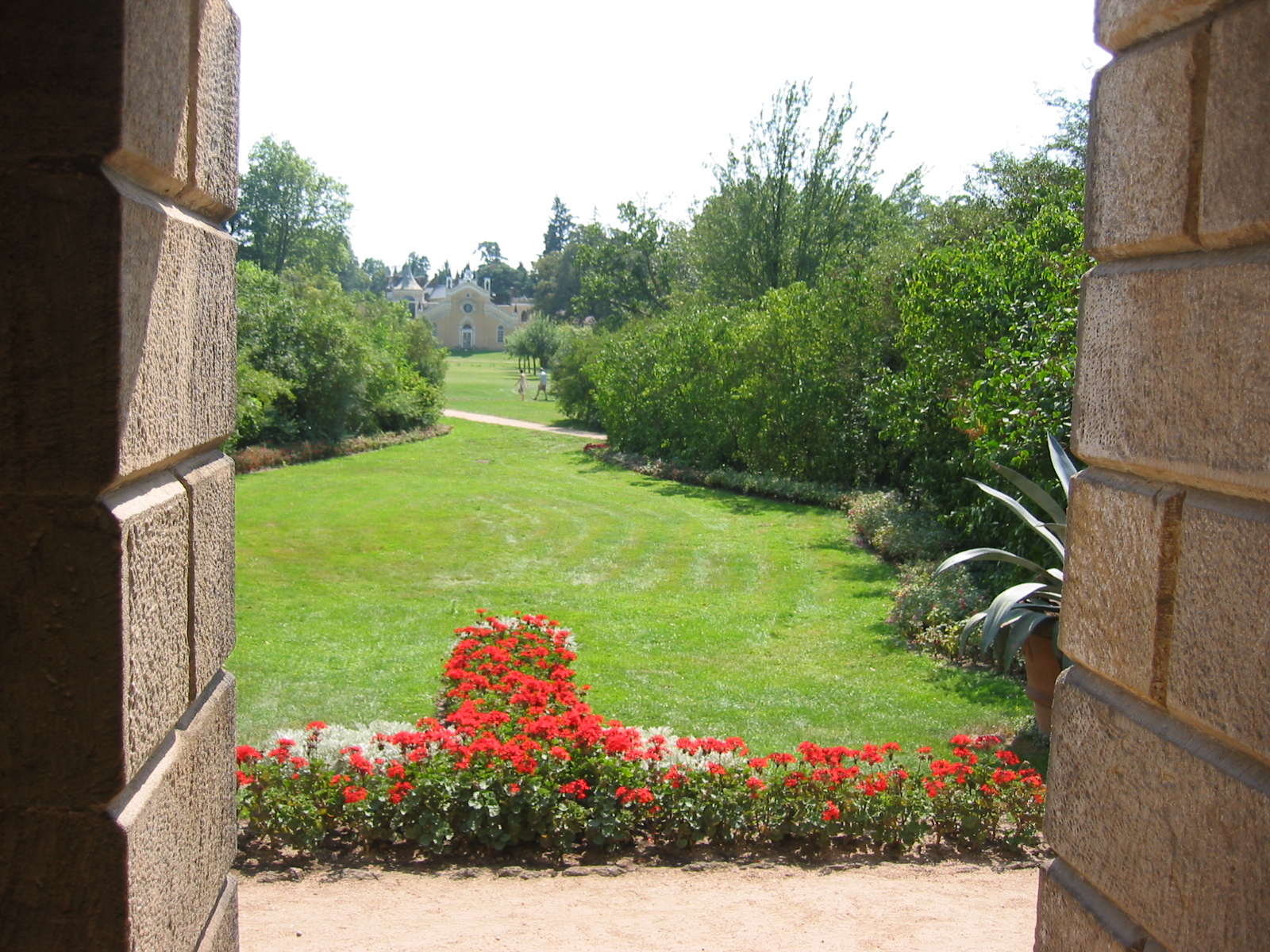 Phallus in flowers pointing from Temple of Flora to Gotisches Haus.

And then we found out. Prince Franz’s ideal of civilization embraced not only landscape design, art and architecture, love of life and nature, personal freedom, religious tolerance (the grounds have a synagogue as well as a church!) and progressive education. It also involved a revival, 120 years before Pierre de Coubertin, of the Olympic Games. From 1777 (some say 1776) to 1799, every year on 24 September, the birthday of his wife, Luise von Anhalt-Dessau, the prince had horse races and gymnastic contests organized in Drehberg, outside Wörlitz. The contestants were boys and girls from the surrounding schools, including the famous model of progressive, child-oriented education Das Philanthropin, founded by the prince himself. In keeping with other aspects of the prince’s personality, the event was not restricted to athletics. The day was also devoted to the celebration of the Saturnalia, the Roman festival of wild joy, even debauchery. It was a day when class differences were ignored and rulers could fraternize, as Franz did, with their subjects. Marriageable girls were encouraged to dance with potential mates until deep into the night.

From my brief acquaintance with Prince Franz, who had a copy of Annibale Carracci’s painting of Jupiter and Ganymede – the king of the gods abducting a teenage boy – hung on the ceiling above his bed, I must say that I have my suspicions about the nature of his fraternization with the schoolchildren of his realm. But let me keep these to myself. More important is that the Olympic Games Wörlitz style were not just for athletics. They were part of a pedagogic and social ideal that is far from the spirit of the modern Olympic Games. The Wörlitz games were played by schoolchildren to give a competitive edge to the physical training that was part of their humanistic education. The young athletes now in Athens live by the reverse rule, subjecting their bodies and their educations to the inhuman demands of Olympic sport.

The body Prince Franz was celebrating, it must be admitted, was political as well as physical. The Drehberg fair became famous, as was the intention, drawing thousands of visitors and serving as propaganda for Wörlitz as a model for the world. Goethe attended and recommended it to the entire court of Weimar. Moreover, I am not convinced that the ancient Olympics were closer to Drehberg in 1777 than to Athens in 2004. The old Greek games had their mercenary and chauvinistic side. If you have your ideals for the choosing, however – and you do! – then as far as I am concerned the choice is clear. Even including the shock of finding ourselves in the cradle of the revived Olympics, we spent our week in the right place. You will not find Drehberg in any guidebook, but when you discover it on your own, as we did, it repays you with a magical, mysterious experience that is all the more precious for being private. 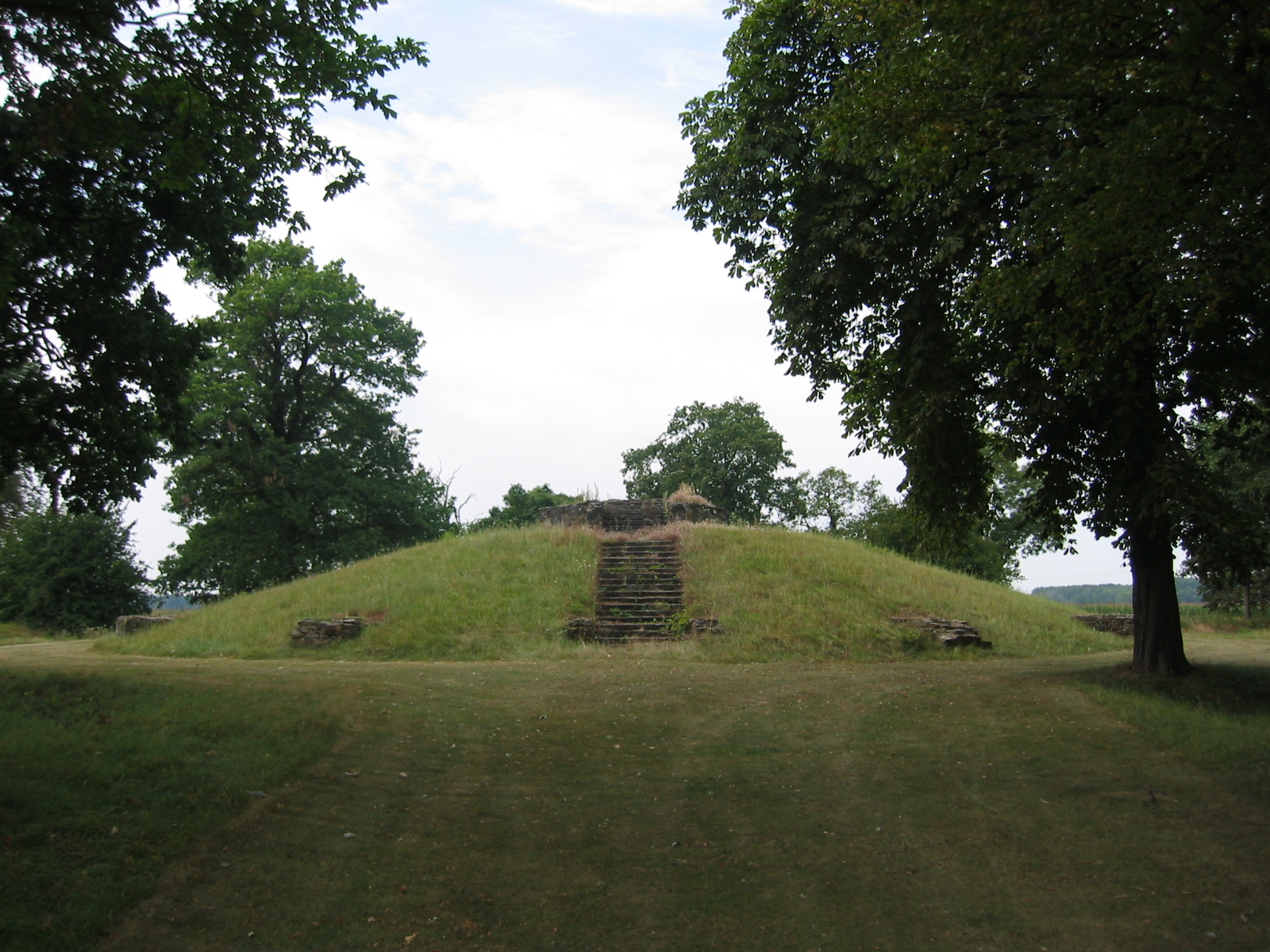 Wörlitz has been selected by UNESCO for the distinction of being on the list of World Cultural Heritage sites. Unfortunately, this does not guarantee survival; the incomparable Garden Kingdom is under financial threat. Before it is too late, visit Wörlitz. In the meanwhile, surf to http://www.gartenreich.com. See also the German version for more information.

We thought that five nights in the Ringhotel Zum Stein, a few hundred yards from one of the entrances to the grounds of Wörlitz (never call it a park, we are told – a park is closed off, and the grounds of Wörlitz have been open day and night since they were laid out in the 1770s), would be time enough to see all the attractions of the Garden Kingdom. We were wrong. Goethe said you needed four or five days for Wörlitz alone, and we should have believed him. We managed to get to Oranienbaum, Schloss Mosigkau and the Georgium in Dessau, but not for long enough; we missed the Luisium, Sieglitzer Park, Grosskühnau and Dessau. The integrity of these preserved sites is all the more precious by contrast to other places we visited, like Hildesheim and Dresden, which were levelled in March 1945 and were reinvented, each its own insufficient way, after the war. Prince Franz was a kind of German we know too little about. He left the army of the Great Elector out of anti-militarism, devoting his 60-year reign in Wörlitz to small-scale government economics, travel, educational reform, agriculture, the finer things in life and other kinds of pleasure. 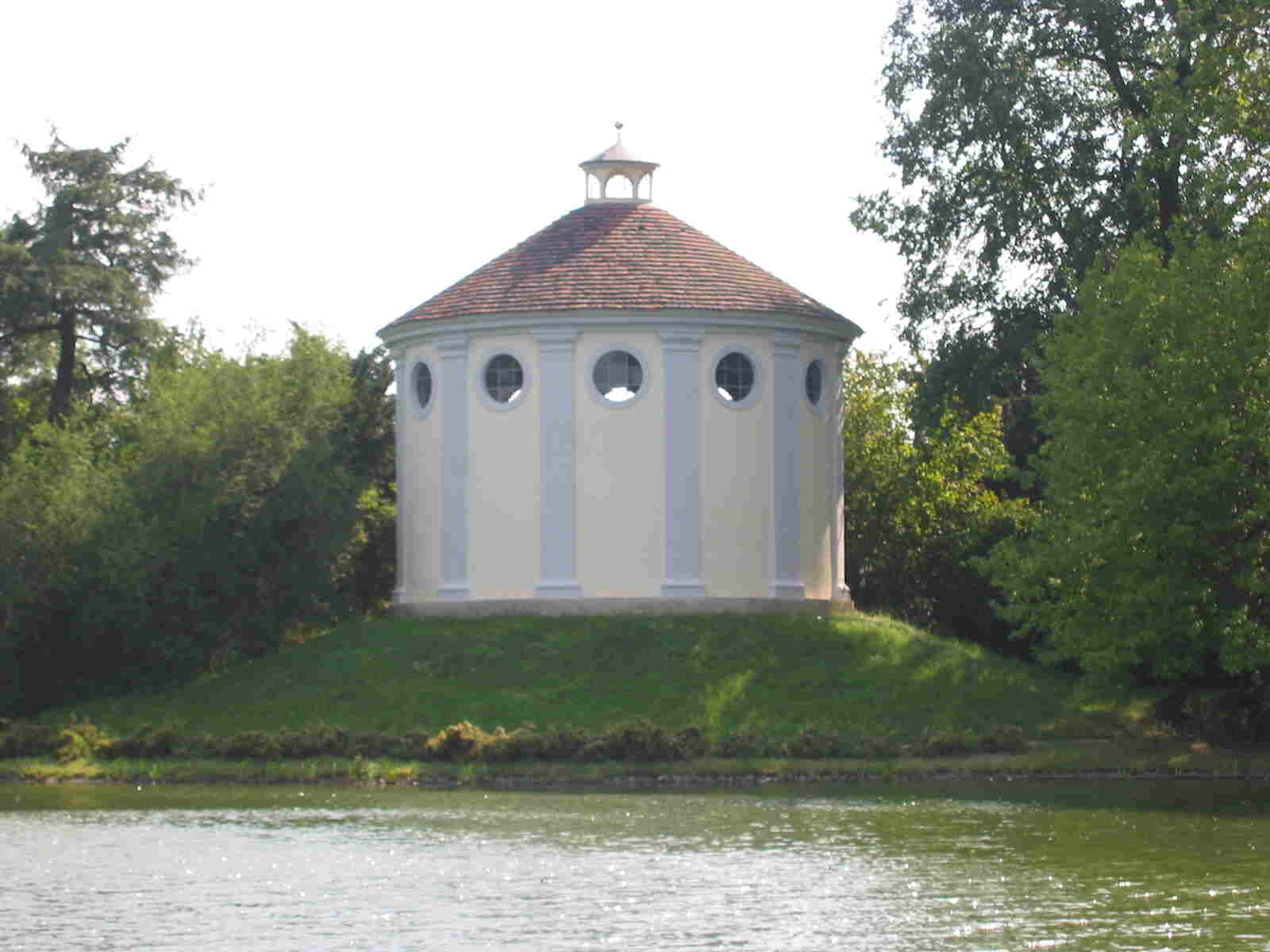 Built by Friedrich Wilhelm von Erdmannsdorf as a garden temple in 1790, inspired by the Temple of the Triumphant Hercules in Rome and given by Prince Franz in 1792 to the Jews of Wörlitz, who used it as their synagogue until 1937.

He gave the Jews of Wörlitz a splendid round building in a prominent place on his grounds for use as a synagogue and admitted them to his educational institutions not only as pupils but even as teachers. Most astonishingly, in the gallery of scholars’ portraits in his library, filled mainly with ancient Greeks and modern English thinkers, he installed Moses Mendelssohn (1729-1786), the Dessau boy who is known as the father of the Jewish Enlightenment. It would be nice to think that the survival of Wörlitz in the Second World War was related to Prince Franz’s pacifism and dedication to human equality. Even if this is too fond a hope, I cherish it as a symbol of historical justice.

Leaving tomorrow for a full week in Stockholm; the weblog of my cultural life will suffer.