While the de-attribution of Rembrandt paintings makes headlines, drawings are removed from the master’s oeuvre by carloads without much public attention. Schwartz reviews the situation in Dresden, on the occasion of a model exhibition of all the drawings in the Kupferstich-Kabinett that were ever assigned to the master.

The Rembrandt Research Project (RRP) is associated in popular imagination with the merciless application of the scalpel to the body of Rembrandt paintings. When they came on the scene, the going tally of accepted authentic panels and canvases by the Leiden-Amsterdam master stood at 420. The highwater mark, established in 1923 by Wilhelm Valentiner, was 714.

Although the RRP, 36 years into its crusade, has not progressed beyond half of the Rembrandt corpus, it was clear from the start where it was heading. Extrapolation from the published volumes of the Corpus of Rembrandt paintings points to a count of about 250 autograph Rembrandts. This information invariably evokes a gasp of shock from the art lover who hears it for the first time. Imagine, two-thirds of the paintings once assigned to Rembrandt thrust into the oubliette of art connoisseurship.

Reader, this is nothing. As the number of accepted paintings was being reduced publicly to one-third of its erstwhile highpoint, that of the drawings has quietly been lowered even more radically, without the newspapers noticing it. Of the possible reasons why this process is not as visible as in the case of the paintings, one is certainly the smaller number of catalogues of Rembrandt’s drawings. In the second half of the 20th century, only one major complete catalogue of Rembrandt’s drawings was published, that of Otto Benesch, first in 1954-57 and in a second edition of 1973. Moreover, the numbers do not seem to give cause for alarm. In 1906 Cornelis Hofstede de Groot catalogued 1613 sheets, in the 1970s Benesch 1384.

It is only when one looks into the critical fortunes of individual collections that the bitter truth emerges. At the beginning of August, the Dresden print room, the Kupferstich-Kabinett (distinguished by its hyphen from all other Kupferstichkabinetten), opened its delectable exhibition Rembrandt: die Dresdener Zeichnungen 2004. The exhibition is a respectful and highly enjoyable presentation of all 117 extant drawings ever considered in Dresden to have been made by the master. (A few others have been lost.) The framework within which the sheets are presented is however a somewhat quizzical bow to the history of connoisseurship, or at least attributionism – no, to be more precise, the history of de-attributionism. The first section, entitled "1890," consists of the 45 drawings that were thought of as Rembrandts before the visit to Dresden of Hofstede de Groot in that year and that did not survive his critical gaze.

Part 2 of the Dresden exhibition, "1954-57," is for the 18 sheets that – you guessed it – were accepted by Hofstede de Groot but rejected by Otto Benesch. The final section, "2004," consists of the 52 Benesch Rembrandts. Not all of them, however, still bear Rembrandt labels. The authors of the catalogue, the retired Dresden curator Christian Dittrich and his successor Thomas Ketelsen, list only 22 of these drawings as Rembrandts; at the press conference, Ketelsen showed himself prepared to sacrifice one or two more. The more Rembrandts one dumps, it seems, the more advanced you are. Dresden now recognizes Rembrandt’s authorship of only one out of six of the drawings with that status before 1890, one out of four from that year. These ratios, I believe, hold for Rembrandt drawings across the line. They are more extreme than those for the paintings, and the RRP had nothing to do with them. (A consolation for the confused: the etchings have so far proven immune to the attrition of Rembrandtness.)

I once saw Joan Rivers do an impression of a Valley girl. Putting on a face as if she were dealing with a profound intellectual challenge, she said, "What I don’t understand is – when you lose weight, like, WHERE DOES IT GO?" So, like, when a drawing loses it Rembrandtness, where does it go? The Dresden experience provides an instructive and typical half-answer. Of the 45 drawings in "1890," 21 have found a confident new attribution to characteristic draftsmen like Jacob Koninck and Abraham Furnerius. None of the 18 drawings in "1954-57" has been re-assigned to a known name. Of the 30 "2004" rejects, Dittrich and Ketelsen dare to assign only 13 to known names.

The other 56 drawings, like the great majority of paintings that in the course of the 20th century have been excised from the Rembrandt oeuvre, have gone into the largest single category of Dutch 17th-century art: the Anonymous Rembrandt School. This provides an answer of sorts to the Valley girl question, but not a very satisfying one. The immense extent of the Anonymous Rembrandt School is a measure of our ignorance; the fluidity of its boundaries is an ongoing accusation against our incapacity to establish reliable standards for attributions.

Rembrandt: die Dresdener Zeichnungen 2004, which is accompanied by an outstanding catalogue, does a great service in focussing on the chronic uncertainty in establishing the authorship of Rembrandt drawings. However, it does not draw the conclusion that seems clear to me; i.e. that the existing criteria of connoisseurship are incapable of solving the problems involved. The authors seem to want to have their cheesecake and eat it too. They demonstrate that older connoisseurship was unable to establish stable criteria for Rembrandtness, but they stand behind judgments of their own that came into being the same way as those of Hofstede de Groot and Benesch. To judge by the comments of visitors in the attractive new galleries of the Kupferstich-Kabinett, the public was more impressed by the historical insufficiencies of connoisseurship than by its present-day achievements. No one felt solid ground under his feet. At the press conference, one of the journalists asked the logical question: 120, 90, 50, 20: the next term in the sequence is 0, isn’t it? Well, actually it isn’t, but it will take a revolution in art history to show why not,

Fortunately, my knowledge has sufficiently vast gaps that I am still able to make fabulous new discoveries of things I should have known about a long time ago. Outside Stockholm, which is full of wonderful discoveries itself, I found Skokloster Slottet, Skokloster Castle. What the Dictionary of art calls "the most sumptuous private house" in 17th-century Sweden was left virtually unchanged, still unfinished, when its owner, Carl Gustav Wrangel, died in 1676. I have never had a stronger historical sensation than on this visit. Even more than in the decorated chambers, with their tasteful potpourri of carpentry, stucco, panelling, textiles, glass, metal, sculpture, paintings and tshatshkes from all over Europe, I was hit hard by the rooms that were not finished. In the grand ballroom and the adjoining workshop for the builders, I had the feeling of walking into the 17th-century world. Of course I know that the building has not really been frozen in time, and that every generation since then has made decisions that affect its appearance today. In the 20th century Skokloster has become the main source of knowledge for 17th-century building and decorating techniques, and a training school for restorers. The present-day effect is no doubt contrived. But this is true of every historical environment; Skokloster remains more authentic than anything else I have ever seen. 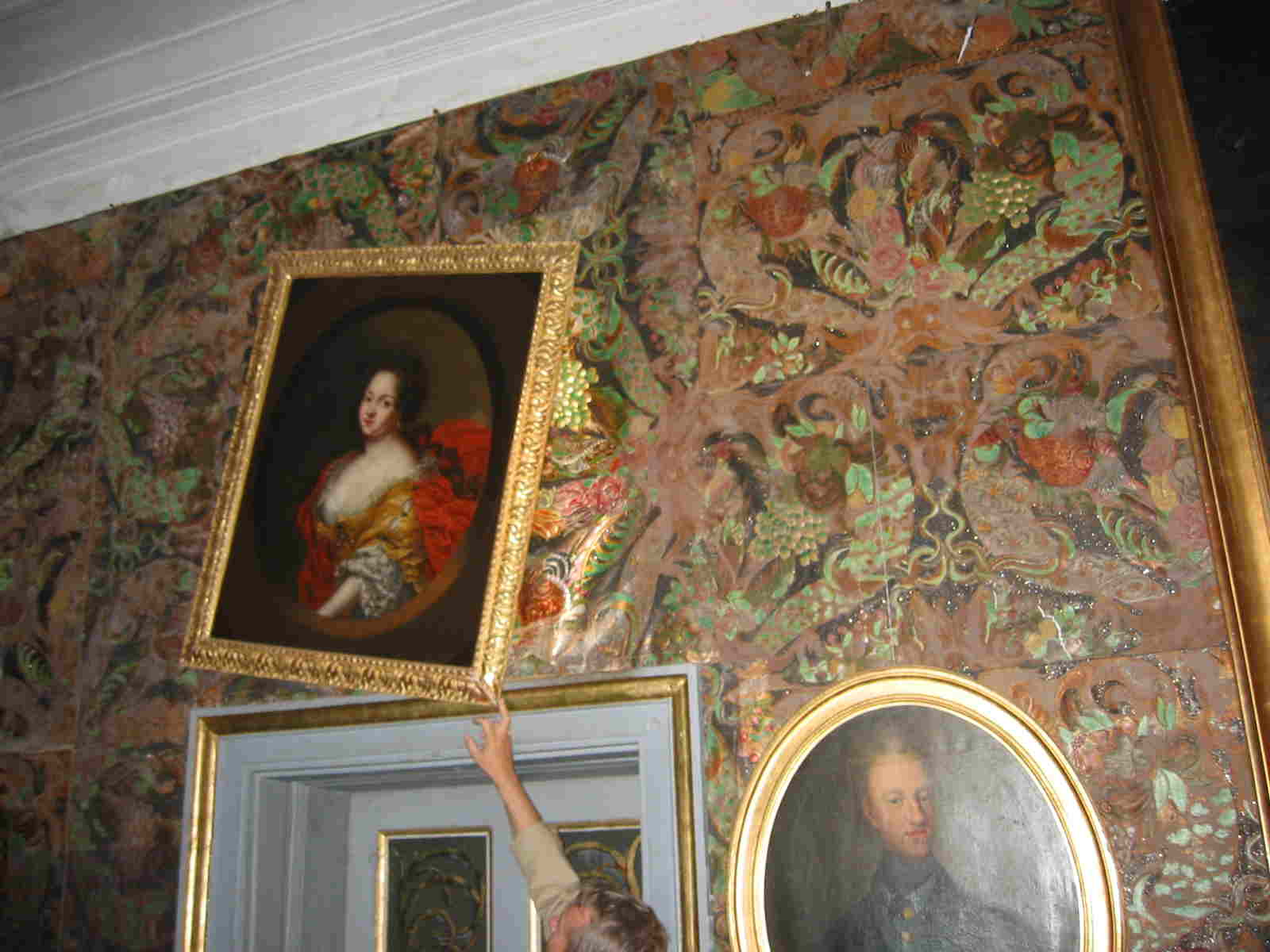 In one detail it puts even itself to shame. The rooms on the piano nobile are covered in hundreds of square meters of gilt leather, in what looks like outstanding condition. Then, in the countess’s drawing room, the curator, Bengt Kylsberg, showed me a piece that has been covered by a painting for 350 years and not exposed to daylight. It shone magnificently, brighter and in more colors than any subsequent age would have thought of as good taste. This one patch of leather undermines your faith in our ability to experience the past by looking at surviving artefacts. Is the imagination a better guide after all? I’m afraid not. My airplane reading happened to be a novel by Michael Crichton on visiting medieval France in the first person, Timeline. Crichton’s attempt to inject direct reality into the past, trumping the reconstructions of archaeologists and linguists, is so flat, transparent, pretentious and boring that I will take even a faded piece of textile above imaginary exercises like his. I know it can be done better – I enjoyed James Clavell’s Shogun mightily – but can it ever be done well enough? 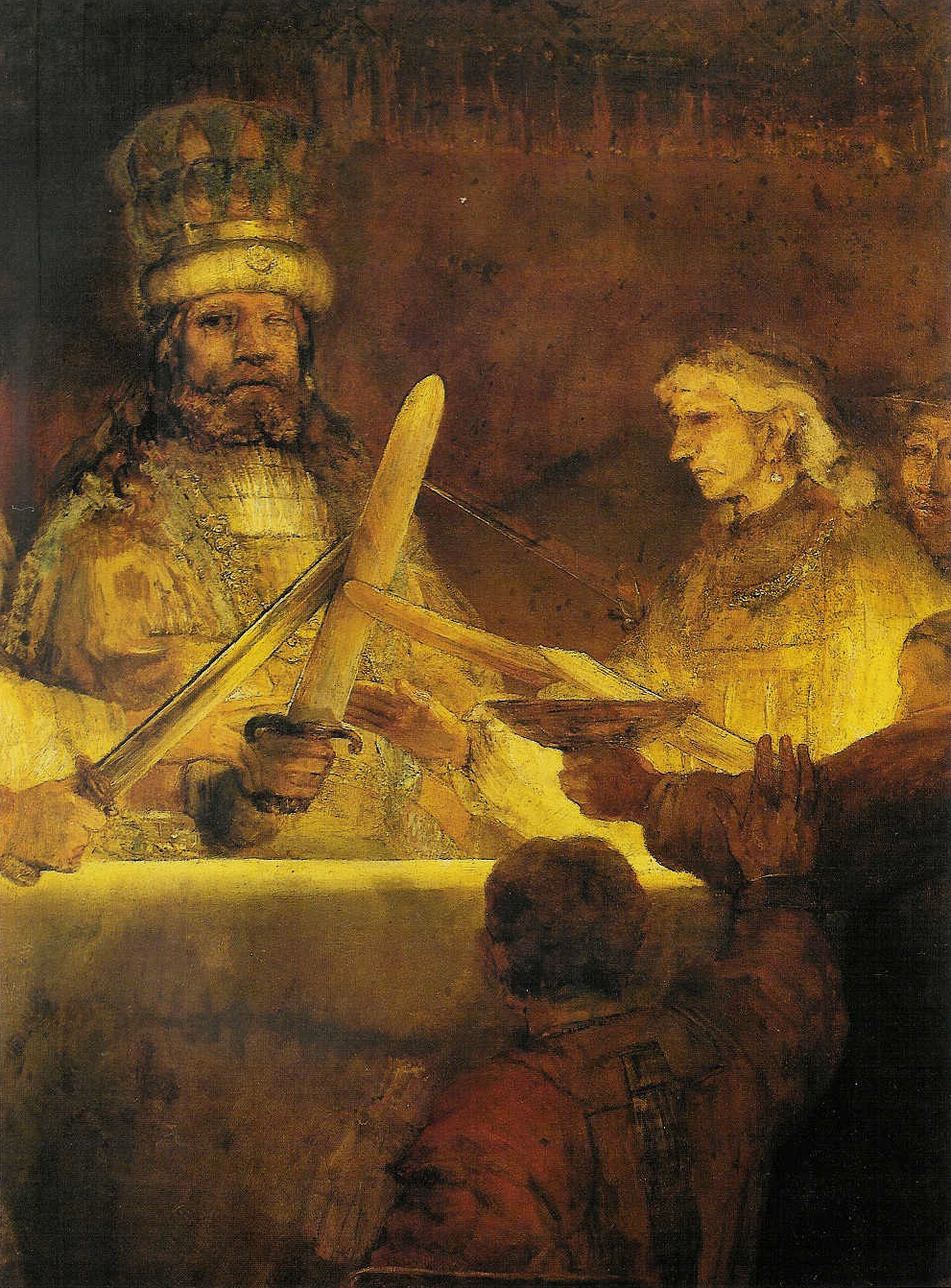 That is one of the questions with which I returned from Sweden. The other is a Rembrandt question. Inspired by the armory at Skokloster, with 2,000 weapons on the racks, ready to arm a regiment of Wrangel’s men, I paid more attention, back in the Nationalmuseum in Stockholm, to the weapons on Rembrandt’s painting The oath of Claudius Civilis. To my surprise, I counted one sword too many. To the (viewer’s) right of Claudius Civilis stand two figures. A brightly illuminated young man holds his hand against the blade of the leader’s sword. From behind him emerge two weapons that touch that of Claudius Civilis. Above is a long, pointed knife that seems to be held by the second man, whose head we see behind the young man. But below that, above the hand of the young man, is another blade, belonging to a curved sword. Who could be holding it? The only possibility I can think of is that the second man has it in his left hand. But why should he be swearing an oath with two swords? That does not seem right. I cannot recall this question being posed in the Rembrandt literature, but perhaps it has. Does any reader have pertinent information?

This issue brought back memories of the keenly missed Bas Kist, expert in so many things, including builders’ tools and weapons of the 17th century. It was Bas with whom I studied the weapons in the Night watch. He was a bit contemptuous of Rembrandt’s offhand ways with weapons. When I mentioned his name to Bengt Kylsberg, I heard, not to my surprise, that Bas had spent many long stays in Skokloster. How wonderful it would have been to visit that castle in his enthusiastic and knowledgable company or discuss the Claudius Civilis with him.

A final association. One of Michael Crichton’s heroes is a Dutch historian named André Marek. "A graduate of Utrecht, Marek was one of the new breed of ‘experimental’ historians, who set out to re-create parts of the past, to experience it firsthand and understand it better. Marek was a fanatic about it." No young graduates of the rather abstractly inclined department of history at Utrecht University that I know behave this way. But Bas Kist did. His kind is not a new breed in the Netherlands, but a dying one. Too bad for Michael Crichton that he never met him.