The first time I ate breakfast in Europe was in the last week of July 1959. I was on my way home to New York from a year abroad as a college student, at the Hebrew University in Jerusalem. Israeli breakfasts were fine, with their different kinds of yoghurt and buttermilk, but I found myself longing for the American variety that I had gone without for so long. At the end of the study year and after taking a final trip around Israel, I sailed from Haifa to Genoa and then started hitchhiking to Paris. On the first evening I reached Milan, where, those being the days, I found a pleasant and cheap pension on the Piazza del Duomo.

The next morning I settled happily at a table in the dining room and placed my order: orange juice, scrambled eggs and coffee. I was speaking English, and the waiter did not understand me. It took some doing to make it clear what I wanted. Walking around the dining room and kitchen with him, I pointed out the oranges, the eggs and the coffee and made appropriate gestures and noises to communicate my wishes. Back at my table, I heard loud discussions coming from the kitchen. This lasted for a few minutes, and was followed by sounds of hard work. After a while the waiter came out with my breakfast. With an uncertain look on his face, he placed before me a large bowl with a lukewarm brownish gruel. I could see small pieces of orange floating around in it and when I poked into the frothy fluid with a fork it turned out to have some of the consistency of raw beaten egg. I politely ate a few spoonfuls of my orange juice and scrambled egg and coffee and hit the streets.

I will never forget the sight that greeted my eyes when I left the front door of the pension and looked right. There rose before me the most splendid building I had ever seen in my 19 years of life. Milan Cathedral was a vision, too beautiful to be real. A vast screen covering the entire square, reaching to the sky, adorned with vast windows, elegant statues, delicate tracery, elaborate carvings, thrilling pinnacles, flying buttresses. As the facing for a church begun in 1386, the only Gothic cathedral in Italy, I thought it was a triumph of the Gothic style. Little did I know. When I later studied art history I was disappointed that Milan Cathedral was not included among the highpoints of European art. I must admit that there is good reason for an historian to be embarrassed by the facade of Milan Cathedral. It is a chronological-stylistic monstrosity, as much a bowl of gruel as my breakfast. The Gothic façade of today was actually designed in 1645, after work had already begun on a classicizing front from the 1580s. Not until Napoloen ordered the Milanese to get their act together was the façade finallly built. When I saw it in 1959, it was not quite finished. The reliefs on the south door were not completed until 1960. The Milanese, who were fed up with the whole business long before, call the Duomo the Big Typewriter.

Later that day, I saw for the first time Leonardo’s Last Supper in the sacristy of Santa Maria delle Grazie. Of course I gazed at it in proper adoration, but after a few minutes I began feeling as if my breakfast was coming up on me. Something was wrong with me or with the painting. In fact, as I learned later, it was the painting. Most of what I saw that day was later restoration. As more recent study has shown, at least three-fourths and as much as 90% of the original surface is gone; most of the missing areas are painted over. The loss is partly the effect of time on any old object, but in greater measure it is Leonardo’s own fault. He knew perfectly well how to paint a fresco, but that was not good enough for him. He insisted on using tempera and perhaps oil paints of the kind generally used for panel painting. No doubt he had a very convincing story for why this was perfectly all right, but it wasn’t. The adhesion of the paint was defective, and the painting began to fall off the wall as soon as it was finished. Fifty years after it was completed, Giorgio Vasari, in his life of the artists, called it a "muddle of blots." Nonetheless, the composition and illusionistic effect of the Cenacolo are such that it was famous from the time it was made. Despite its barely being there, it has remained one of the key monuments in the history of art ever since. Makes you wonder how relevant the work of art itself really is to artistic fame.

These tales from Milan have always stayed with me as a parable of creativity. By its nature, creativity involves doing something for the first time, something the outcome of which is uncertain. Life being what it is, the chance of hitting the mark when one does something the least bit difficult for the first time is close to nil. In fact, in a creative situation one cannot even know what hitting the mark is, since the outcome is uncertain. If you’re lucky you hit something, and then you (or a friendly critic) decides whether or not to call what you hit the mark.

All creativity, in this sense, answers to the description of my breakfast in Milan: a sure failure in terms of original expectations. The only real difference between my breakfast and Leonardo’s supper is that his supper – a ruin from the moment it was made – nonetheless appealed to people. Perhaps I should have finished my gruel that morning. Who knows if I walked away from discovering a drink that goes down as well for breakfast as does wine for supper.

This afternoon I presented a long version of this argument at De Pont in Tilburg, in a series of informal talks called Een goed verhaal, A good story.

The 400 delegates to the Second World Public Forum "Dialogue of Civilizations" included a striking number of bearded and braided Orthodox clergymen, 50 or more. (No list of participants was provided.) I’m sure I would have enjoyed dialoguing with them, but they kept rather to themselves. There are 15 different Orthodox churches in the world, and one of the main purposes of the Forum was to move them toward greater unity. One of the organizers told me that the priests and Orthodox functionaries who attended the congress represented the left wing of the church, those who were prepared to talk about dialogue. Many others are not. 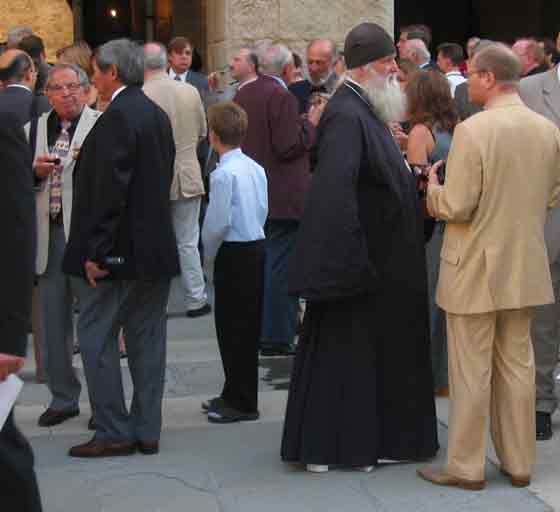 The company was marvelously mixed. In the photo above, taken at the opening reception in the courtyard of the Palace of the Grand Master of the Knights of Rhodes, rebuilt in the 1920s by the Italian occupiers in honor of Vittorio Emmanuele and Mussolini, you see two speakers from the US, the critical political philosopher Fred Dallmayr, on the left with the bright tie, and the dissident international law expert Richard Falk, balding and with beard, upstaged by a stately churchman whose identity I do not know.

The Russian participants, who were in the majority, were still in a state of shock over the Beslan tragedy of the previous month. Those of us from other countries learned in Rhodes that their trauma was very much like that suffered by Americans following 9/11. The idea that the regular occurrence in Russian of terrorist attacks has helped Russians build up immunity to the phenomenon is not true. The reactions we heard expressed the same disbelief and powerless defiance that Americans felt in the fall of 2001. The second leitmotiv of the congress was taken from the title of Samuel Huntington’s book The clash of civillizations. Speaker after speaker felt obliged to deny that civilizations were clashing even as they bemoaned evidence to the contrary. Dallmayr and Falk attempted, brilliantly and humanely, to move beyond horror to future perspectives of some hopefulness and were applauded for doing so. Yet, the prevailing sentiment was the Putin-Bush line: "If you’re not with us, you’re with the terrorists."

The forthcoming American elections are beginning to remind me ominously of 1972. Then too, America was losing a Eurasian land war without being willing to admit it. The country re-elected an incumbent dripping with insincerity, Richard Nixon. A month later, in December 1972, he ordered a murderous bombing of the cities of North Vietnam, in a campaign known as the Christmas Bombings. When this did not throw the enemy back to the Stone Age, Nixon pulled up stakes and ran. In March 1973 he left his brave allies in South Vietnam to their fate. If I were a member of the Iraqi Interim Government today, I would be taking measures to assure myself of room inside the last chopper out of the Green Zone.

Yesterday I had a nice lunch with Simon Schama, who was here with a big television crew to work on a Rembrandt film. I was able to help the director, James Runcie, with some contacts, appointments and locations. At lunch Simon and I talked a bit about Rembrandt, but mostly about America. How can you beat Bush if half the country believes that Saddam Hussein was behind the attacks of September 11th? How can you stop Fox from leading people to believe this? The desperation mounts.

Two weeks from today I will be in Boston, celebrating the bat mitzvah of my darling niece Anneke Reich. The posting of Schwartzlist 222 will probably be delayed, perhaps by a full week.