The violent deaths and attitudes toward Islam of Theo van Gogh and the brother of his great-grandfather, Vincent van Gogh, are compared. The murder of Theo brings to mind Schwartz’s one meeting with him, which remained the only one because Schwartz could not ignore van Gogh’s repugnant anti-Semitism. A man who figuratively went for the jugular of his opponents has been brought down by one of them who did the same literally.

In several articles on the murder of Theo van Gogh, The New York Times called him "a distant relative" of the artist Vincent van Gogh. So distant he was not. Theo was the great-grandson of Vincent’s brother, also named Theo. The great-grandfather, a prince of a man, was baptized Theodorus, the name of his and Vincent’s father, a Protestant minister in Catholic Brabant.

In a television interview, the late filmmaker was asked whether he felt any affinity with the great artist in his family. He denied that he did and said that as a boy he was indifferent to the relation. I find this hard to believe. How could the inheritance of one of the most famous names of European art fail to spark the imagination of any child, let alone one with artistic aspirations?

I detect a certain resemblance in character between the two men, which may or may not be a family trait. They both had a certain inclination toward fanaticism. The painter had the unshakeable conviction that his art would be worthwhile only if he was uncompromisingly, uncomfortably honest. Ronald de Leeuw speaks of an "inflexibility [that] alienated him from his fellow men." The filmmaker, while working in a medium that cannot exist without compromise, staked a claim to unlimited freedom of verbal expression.

There is also a parallel in the fate of Vincent and of his brother’s great-grandson. Both met violent deaths in early middle age, Vincent by his own hand, perhaps as a result of his alienation, Theo in circumstances directly related to the uneasy stance in society both of himself and of his killer.

I met Theo van Gogh once, when about five years ago I was a guest on Max Pam’s radio program, in which van Gogh was on the panel. He was attractively irreverent and behaved himself perfectly well on the air. After the program we had a brief conversation. I would have liked to get to know him, but there was an obstacle that had to be cleared away first. In 1995 he published an anti-Semitic insult against a Dutch Jewish woman that may be the single most repugnant thing I have ever read. In a polemical exchange about Jewish themes in Dutch literature, van Gogh wrote of his opponent that she probably had wet dreams about Dr. Mengele. I confronted him with this and told him that I would have nothing to do with him unless he apologized for that remark. He said that he saw no reason to do so and never would. That was the end of that.

Van Gogh was fined in 1991 for a similar insult, when in a debate with a Dutch Jewish writer he had written of "copulating yellow stars in the gas chamber" and the "caramel smell" of cremated Jews with diabetes. In a lawsuit brought against him by two prominent Dutch Jewish personalities, Ronni Naftaniël and Sonja Barend, he was fined 1,000 guilders. However, when he republished the same article and was sued by the Dutch equivalent of the Anti-Defamation League, he was acquitted on appeal. The difficulty of obtaining convictions in the Dutch courts for gross insults of this kind has been cited by Muslim organizations as the reason why they do not take recourse to legal proceedings when they are abused in public. (See http://www.cidi.nl/media/2004/nrc.051104.html.)

A jumble of arguments and events have been triggered by the murder of Theo van Gogh. The most serious of these are the threats to politicians, who represent the state itself, and the attacks on schools and places of worship. Until now, the normal instruments of the constitutional state and civil society have continued to function well under the shock and the strain. Government, parliament and police, even the royal family, responded quickly and so to see effectively. The press, the media, churches and other religious organizations have spoken and listened and have provided an outlet for a great variety of opinions, even highly emotional ones. We can only hope that this continues and that it helps defuse the danger of new violence.

These institutions cannot prevent terrorists, vigilantes and other criminals from placing themselves outside the system and above the law. However, civil society can isolate violators and the state can capture and punish them. As long as these systems do their work and continue to enjoy confidence and respect, we can hope that the country will weather the storm without being changed unrecognizably. Sorry to say, Theo van Gogh, his better qualities aside, was a scofflaw whose outrageous taunts weakened the system that might have been able to protect him.

Theo’s gentler, older relative also insulted the prophet Mohammed, but hear how he does it: "The doctors tell us … that not only Moses, Mohammed, Christ, Luther, Bunyan and others were crazy. So were Frans Hals, Rembrandt, Delacroix and all narrow-minded old women like Mom [for her belief in an afterlife]. Wow, that’s bad. Do you suppose that the brothel owners are always right? Probably." Vincent implies that every belief in values beyond the fulfillment of basic bodily needs is irrational. He includes his mother and, by extension from Rembrandt and Frans Hals, himself in the same class of madmen to which Mohammed belonged, along with prophets of Judaism and Christianity. This self-deprecating acceptance of multi-culturality would not drive anyone to pick up a pistol. It is a gesture of loving inclusiveness, and there is no record of any Muslim ever having taken umbrage from it.

Those words are from a letter of 6 August 1888 from Vincent to Theo. Theodorus. A gift from God.

This installment is two weeks late not only because I have been away, but also because the Financieele Dagblad has asked me not to write a column for today’s issue, 4 December. The next one is to appear on 18 December. They have announced another change as well. The supplement in which my column appears is going tabloid, and they want the columns to reflect this. Instead of 900 words, they have asked me to write 500. In itself, I do not think this is bad for a column. I think that more people will read a 500-word text through than a longer one. However, it will force me to write punchier texts with less qualifications and "on the one hand … but on the other hand" paragraphs.

19 November: Left for Israel to participate in a congress on the history of Dutch Jewry at the Hebrew University, on a trip that was originally supposed to last seven days, until Thursday the 25th. However, after booking our flights, I learned that the gravestone of my cousin Yisroel Bloom, with whom I grew up together in Brooklyn, was to take place in Jerusalem on 26 November. With some difficulty, I was able to delay my return until after the weekend. The week was therefore spent among historians mainly from Holland and Israel on the Mount Scopus campus, interspersed with visits to the city and to friends in Jerusalem and Tel Aviv, including a delightful lunch in Abu Ghosh with a Schwartzlist reader whom I had never met, and the Friday with my family. 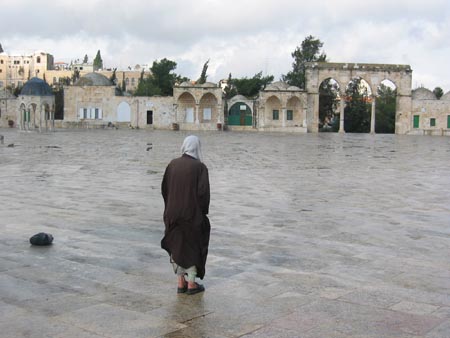 The Temple Mount, one of the most beautiful places on earth, was nearly deserted when we visited it, between prayers, except for a woman who stood beside a bundle for as long as we were there

The Mayersdorf Faculty Club, where the congress participants were housed, is on the Mount Scopus campus, a few kilometers from Jewish Jerusalem. After dark the campus is deserted, locked down and hard to enter or leave. There is no café or bar, so one evening Loekie and I invited two other thirsty participants to our room for drinks. We had an intense discussion, largely about Theo van Gogh, with Hans Blom, director of the Netherlands Institute for War Documentation, and Evelien Gans, professor of modern Dutch history at the University of Amsterdam and the Dutch Jewish woman to whom I refer in the column above. She told us that she did not take van Gogh to court because it would have meant prolonging the association of her name with that of Mengele. She felt that van Gogh knew this and was counting on it.

The congress was a classical scholarly affair, a string of lectures of mixed quality mostly read from text. All of it was conducted in the lingua franca of our time, bad English. (There were honorable exceptions.) Nearly everybody went over their time, so there was little discussion. It’s easier on the nerves to attend a congress in a field that isn’t your own, and I enjoyed and admired this one. You’re not involved in the arguments and the personality clashes. This time around, these were played out in the corridors and not in the hall, as has sometimes happened in the past, I was told. My own talk, about references to Solomon’s Temple in Dutch art architecture and theology of the 17th century, was marginal to the main themes of Dutch Jewish history. 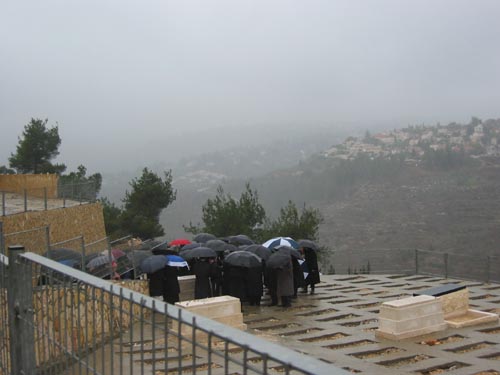 At the unveiling of the tombstone of Yisroel Bloom, Har haMenuchot, Jerusalem, 26 November 2004

I was also somewhat marginal at the unveiling. The Blooms belong to the haredi, ultra-Orthodox current in Judaism. This makes for a bit of adjustment in behavior and topics of discussion on both sides; we do not see each other often. However, I love them and I always enjoy experiencing and being taken up in their family warmth. My late cousin Yisroel and his wonderful wife Tzurtie have nine or eleven children. (I forget whether his brother Shmuel has the nine and he the eleven or whether it’s the other way around.) With spouses, children, children’s spouses and grandchildren, they and the third brother, Ernie, with a mere two children, are the patriarchs of a tribe approaching 100 members. Many of them flew over for the unveiling; others were already in Israel, studying at a seminary. My three sisters and myself, with our offspring, form a tribelet of 14 that is clearly outstripped both demographically and in degree of togetherness by the Blooms.

27 November: Treated myself to a powerful dose of Jerusalem, a city that is very important in my life. A few hours at the Israel Museum, a few hours in the old city and a few hours in the ultra-Orthodox quarters, walking the streets toward the end of the Shabbat, stopping outside the house synagogues where the most interesting chanting was being done. In the course of the week Loekie and I had walked around the new city, where many shops in the main streets had signs in English, French and Italian thanking the tourists for being brave enough to come to Jerusalem. The inconspicuous memorial tablet for the victims of the bomb attack in Rehov Ben Yehudah is only in Hebrew.