The Foundation for Prussian Palaces and Gardens has published a massive compendium of the easel paintings it lost during and after the Second World War. Most turn out not to have been destroyed, but misappropriated or taken off by the Russians as "trophy art." Schwartz stands up for the international conventions that prohibit taking cultural heritage as booty, no matter how just a war might be or how much one’s own side has suffered.

My resolve to end the year with an upbeat column was wrecked by the receipt on 24 December of a big art book from Germany. Unopened, it had all the promise of being a delightful Christmas present. Taken from its packaging, the 728-page book made my heart sink. Zerstört, entführt, verschollen: die Verluste der preussischen Schlösser im Zweiten Weltkrieg (Destroyed, taken off, missing: the losses of the Prussian Palaces in the Second World War). The book catalogues more than 3,000 missing paintings that in 1939 were among the 7,314 belonging to the German bureau that administered the former Hohenzollern estates in Prussia. To make things worse, the second subtitle of the book is Gemälde I. This is only the first of two projected volumes on paintings, with other volumes to follow on sculpture, porcelain, musical instruments, clocks, silver, furniture, prints and drawings, books. 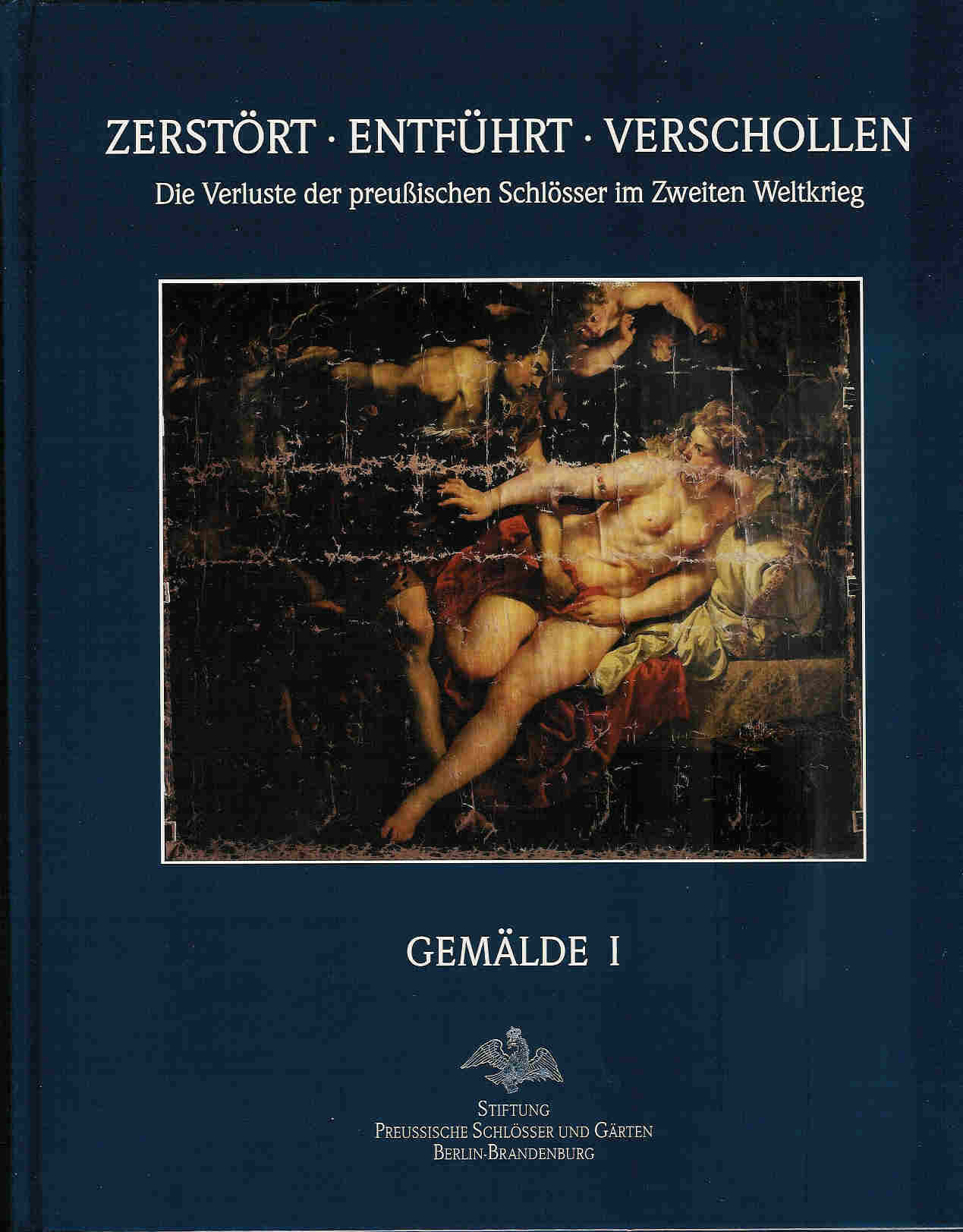 The painting on the cover is Tarquin and Lucretia by Peter Paul Rubens, from Sanssouci, Potsdam. It is now in a private collection in Moscow..

With the horrifying facts about Allied bombing in mind, I braced myself for the worst and plunged into the introduction by Burkhardt Göres, director of Castles and Gardens. To my surprise, it was largely a story about the successful preservation of the collections throughout the war. Göres’s predecessor, Ernst Gall, showed considerable foresight before and bravery during the war. His efforts were not always appreciated by his superiors in the Nazi hierarchy. For Germany to remove its art treasures for safekeeping before launching a war would have been tantamount to admitting its militaristic intentions. Once the war began, it was seen as a sign of defeatism to dismantle historical buildings. Nonetheless, the directors of German museums did what they could to safeguard their collections, notwithstanding conflicting instructions from superiors who sometimes were pursuing private interests of their own.

Thanks to luck as much as wisdom, Gall’s constant transports of his collections from one depot to the other, in mines, church and palace cellars, country estates and ad hoc facilities, saved the objects from destruction. As Berlin fell within range of British bombing in the course of 1943, he moved his emergency storage locations from the Berliner Schloss and the Cathedral crypt to safer places in the country. Wall paintings were lost in many places, but the only instance of major destruction of easel paintings through Allied action I could find was the bombing of Leineschloss in Hannover on 26 July 1943, where a certain number of paintings from the Prussian service were stored. (The book unfortunately lacks sufficient tables to clarify its great mass of numbers, dates and places. Nonetheless, Gerd Bartoschek, the compiler of the catalogue, deserves immense credit for his monumental task.)

If the 3,000 paintings were not destroyed during the war, then, where are they? In most cases, the answer is simple: they were taken by the Russians. In April 1945 the Russians conquered Potsdam, where most of the collections and the headquarters of the service had ended up. Gall and his associates were forced to reveal the locations of their storage areas. In the course of 1945 and 1946 nearly everything that could be moved was carted off to the east. A typical entry, on Ridolfo Ghirlandaio’s Coronation of the Virgin with Archangel Michael, reads: "Packed on 18 April 1946 (Crate 38) and transported to the Soviet Union." Or of a Bacchanal by Cornelis Cornelisz. van Haarlem: "Now in the State Pushkin Museum, as war booty." Other entries end simply with a reference to the last place a painting was recorded: Schloss Rheinsberg was a major repository, as was the Neues Palais in Potsdam. When no further facts are recorded, the presumption is that the works, if not stolen by Russian troops (the female nudes were the first to go), were removed by "trophy" units of the Russian army. The catalogue, in all its bareness, evokes the nightmarish situation of Germany in its defeat.

During the Cold War, the Russians returned some 500 paintings to Prussian palaces in the DDR. Charlottenburg, which lay in West Berlin, was excluded from this restitution. A small number of missing paintings were returned by individuals, sometimes under questionable circumstances. One such action was discovered after the Wende to have been staged by the Stasi in order to tempt a Potsdam curator into keeping the painting himself.

Seen in terms of my initial fear that the book catalogues the irrevocable destruction of 3,000 paintings, this is a relief. However, the sense of relief did not last long. For nearly 60 years, these art treasures, including works of considerable art-historical importance, have been hidden away in circumstances that offer no guarantee for their long-term conservation. The paintings in question do not fall under the care of the official curators of the museums where some of them are now known to be located. They are not even inventoried. The new German catalogue derived information concerning some of them from the Russian websites www.restitution.ru, sites that have since been disabled for "reconstruction."

The partial restitution to the German Democratic Republic that was carried out by the Soviet Union is not about to be completed by the reduced Russian Federation to the new Federal Republic of Germany. This refusal, which the Duma has put into law, stands in defiance not only of bilateral agreements between the two countries, but also of international standards predating the Great Patriotic War, which remove cultural objects from the category of legal booty.

Above and beyond these considerations, the retention by Russia of cultural heritage from Germany amounts to a prolongation of the Second World War into the 21st century. This is too much of a bad thing. It is also completely superfluous. As has already been conclusively demonstrated, we of the new age are perfectly capable of performing our own cultural atrocities.

With the final remark, I was thinking of the devastation in Iraq. After the worldwide outrage at the plundering of the National Museum and the National Library in Baghdad, I expected the occupiers to take steps to guard the archaeological sites in the country for which they have assumed responsibility. They have not done so. In August, the international adviser on culture to the provisional government in Iraq, Zainab Bahrani of Columbia University, quit her post after only three months. On 31 August, she wrote in The Guardian:

"Iraq is ancient Mesopotamia, otherwise called the ‘cradle of civilisation’. It has more than 10,000 listed archeological sites, as well as hundreds of medieval and Ottoman Muslim, Christian and Jewish monuments. The coalition did not establish a means of guarding the sites, though they would be protected in any other country rich in antiquities. As a result, archeological sites are being looted to an extent previously unimagined. … There is no parallel for the amount of historical destruction that has taken place over the past 15 months in Iraq. The Geneva and Hague conventions make the protection of heritage the responsibility of the foreign powers during occupation. Instead, what we have seen under the occupation is a general policy of neglect and even an active destruction of the historical and archeological record of the land."

Following the American conquest of Afghanistan, opium became the mainstay of the economy. In November 2004, the United Nations Office on Drugs and Crime said in its annual report on Afghanistan that this year "opium cultivation … spread to all 32 provinces — making narcotics the main engine of economic growth and the strongest bond among previously quarrelsome populations. Valued at $2.8 billion, the opium economy is now equivalent to about 60% of Afghanistan’s 2003 GDP ($4.6 billion, if only licit activity is measured)."

In Iraq, although figures are lacking, it is not unlikely that the main export product in 2004 was antiquities for the Western market, from predatory illegal digs. In the model Middle Eastern state that America is establishing in Iraq, the only place for cultural heritage is to furnish the goods for a clandestine trade that is probably the most efficient market in the country at this point.

Is there anything we can do about this? These cultural atrocities are being committed in our name, as citizens of Western democracies participating in the Afghanistan and Iraq coalitions. Are American and international associations of art historians and archaeologists organizing campaigns to put an end to this? I have heard nothing recently even about statements let along effective pressure. UNESCO and ICOM do issue statements, but as far as I can tell do little else.

There is much suffering in the world that you and I are powerless to alleviate. The plundering of Iraq is a crime we might be able to influence. More than natural disasters, humanitarian catastrophes or warfare, it lies close to our responsibility as participants in the fields of art and culture. Of course I want you all to have a good year in 2005, but how good can it be if a year from now we have stood by while our governments preside over the destruction of the remnants of the oldest civilization on earth? Think, publish, act! That is my New Year’s wish for 2005.

As a concrete recommendation, begin by subscribing to Ton Cremer’s invaluable listserv, Cultural Property Protection Net.
"To subscribe or unsubscribe via the World Wide Web,
visit http://duvel.te.verweg.com/cgi-bin/mailman/listinfo/cpprot
or, via email, send a message with subject or body ‘help’ to
cpprot-request@te.verweg.com"