The jacket image of the new summary illustrated catalogue of the Mauritshuis is the double portrait of Constantijn Huygens and his wife Suzanna van Baerle, Sterre. This brings back vivid memories of the acquisition of the painting by the Mauritshuis 13 years ago. Schwartz tells the inside story of his role in that coup, and that of the venerable Julius Held. 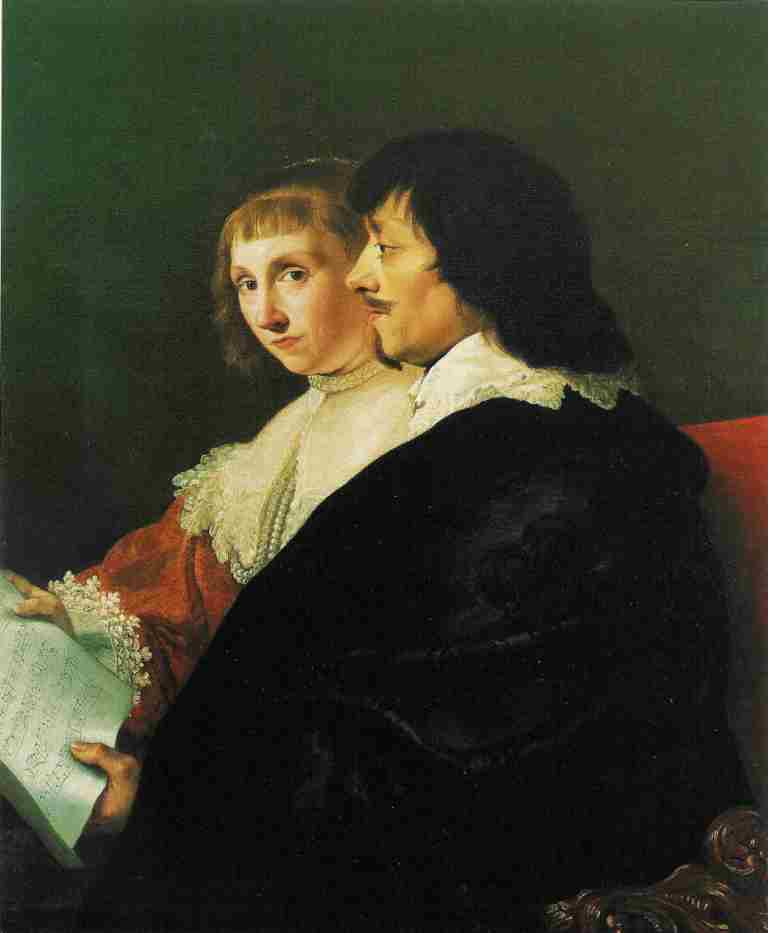 This month the Mauritshuis is bringing out a new edition of its illustrated summary catalogue. This kind of publication – a handy volume with a brief entry on each and every object in the collection, with a small illustration – is of great use even in the Age of Internet.

I have not yet seen the book itself, but at a reception for the departing head of restoration, Jörgen Wadum, I caught a glimpse of the hand-bound copy with which he was presented. To my intense delight, the painting on the cover is the double portrait of Constantijn Huygens and his wife Suzanna van Baerle, convincingly attributed to Jacob van Campen. Suzanna – Sterre (Star) to her husband – is known to every reader of Huygens’s poetry as a brilliant woman with whom Huygens was deeply in love. Her gifts as a mother, as a soulmate to the demanding Constantijn, and as manager of a serious household were a model for high bourgeois Dutch family life for centuries. Sterre’s death in May 1637 at the age of 38 is one of those historical deaths that, like Mozart’s, continues to cause fresh pain. Although Huygens was portrayed dozens of times, the painting in the Mauritshuis is the only one to show Suzanna. The painter has moreover found a perfect way of showing her. Standing behind Constantijn, who is depicted in strict, somewhat forbidding profile, Sterre looks past him straight at us. The painting offers us the comforting illusion of a personal tie with the real woman.

My delight at seeing the painting on the cover of the Mauritshuis catalogue is personal in another way as well: I played a role in the acquisition of that painting. In April 1992, my wife Loekie and I were in London for a few days. One of the things I wanted to do there was to see the double portrait, which had been published for the first time in December 1991 and which was owned privately in England. The scholar who discovered it was Julius Held, then 86 years old and still going strong. (He died in December 2003 at the age of 97.) When I wrote him asking who the owner was, Held told me that he was bound to confidentiality, but that Christie’s might be able to help me further.

The head of the department for Old Master paintings at Christie’s is the art historian Gregory Martin, an old acquaintance. “You don’t have to know the owner," he told me on the phone. "The painting is right here. It’s going on the block next week. If you want to see it, come on over." Gregory and Loekie and I spent half an hour admiring and discussing the painting. After we left, I was struck with an urgent thought. “Why didn’t the Dutch press report on this sale? This painting should be in a Dutch museum." I called NRC Handelsblad, which agreed to place an article. The piece took on the nature of an appeal, ending thus:

"Where else does this double portrait belong than in the Mauritshuis? The town palace Jacob van Campen built for Johan Maurits van Nassau rose at the same time as and around the corner from the Huygenshuis. The architecture of that mansion was inspired by van Campen and constructed partly under Suzanna’s supervision. Constantijn and the five children moved in on 19 May 1637, the day after they buried Sterre. The auction-house estimate for the painting is 50 to 70 thousand pounds. That is not much money for a good 17th-century painting, but it happens to be less than the entire annual acquisitions budget for the Mauritshuis. Who can see to it that Sterre comes back to The Hague?"

Before releasing the article, I called the director of the Mauritshuis, Frits Duparc, to ask whether the publication would get in the way of whatever attempts he might be making to buy the painting. “Unfortunately not," he said. “I tried everything I could think of, and I couldn’t raise the money."

Two days before the auction, on 13 April 1992, the piece was published. Because the arts page was full that day, the newspaper placed it on the op-ed page, which attracts more attention. (The editor of that page, I was told afterwards, was charmed by the idea because he lived on the Constantijn Huygensstraat in Amsterdam.) They gave it the commanding header "Sterre belongs in the Mauritshuis." Tuesday afternoon Frits Duparc called to tell me that the telephone had not stopped ringing the entire day. People were calling in to offer money to buy the painting. He was audibly moved. When he called back on Wednesday morning he was even more moved. "Don’t tell anyone," he said. "We’re buying it." After reading my article, an anonymous donor had committed to contribute the difference between the other donations, supplemented by what the museum could pay, and the auction price. That evening (which happened to be Julius Held’s 87th birthday – it did him good) the Mauritshuis became owner of the painting for 110,000 pounds. According to insiders this was about ten percent more than the painting would have fetched had my article not appeared.

For years afterward, I asked Duparc at odd moments who the anonymous donor was. “She swore me to everlasting secrecy," was always his reply, revealing only that it was a woman. This chain of events resulted not only in the return of Sterre to The Hague, it was also the closest thing a Dutch museum had ever experienced to a truly spontaneous wave of private donations for an acquisition. Whatever considerations may have guided the decision to put the double portrait on the cover of the new catalogue, the choice is a tribute to the donors. Whenever they see it, they will I am sure re-experience the good feeling they derived from their gesture of 13 years ago. Not alas, the chief donor who, Duparc has let me know, left this world not long ago. She too was a star.

One problem associated with the publication of the double portrait and its sale by Christie’s is that the owner believed it to be by Velázquez. He had expected to sell it for millions. Held and Gregory Martin had to ease him gently down to van Campen level. 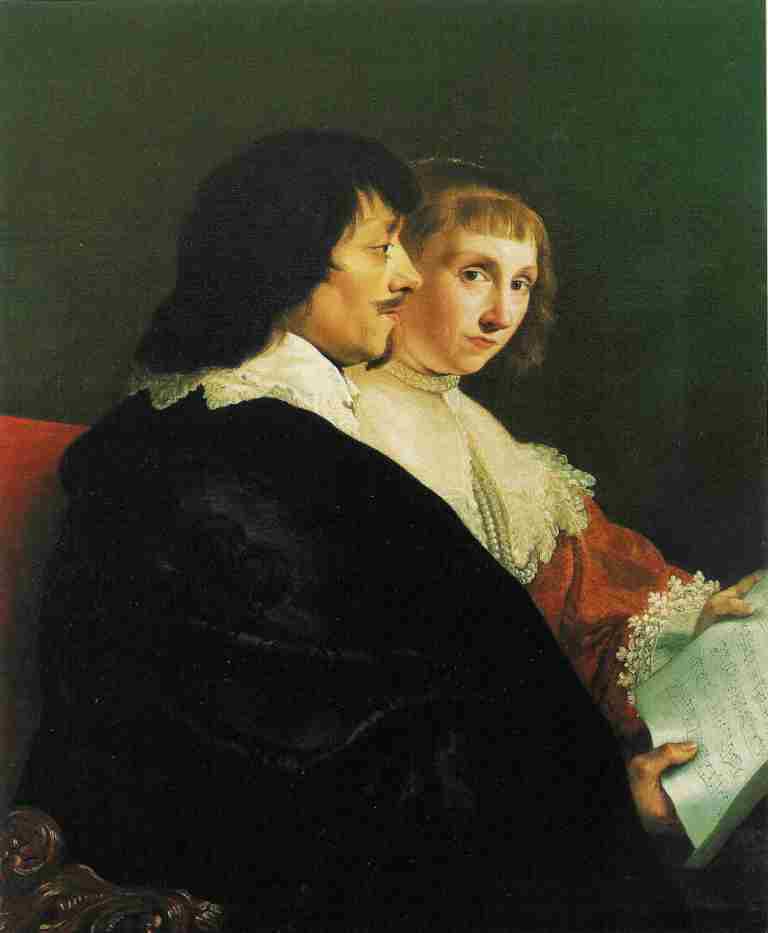 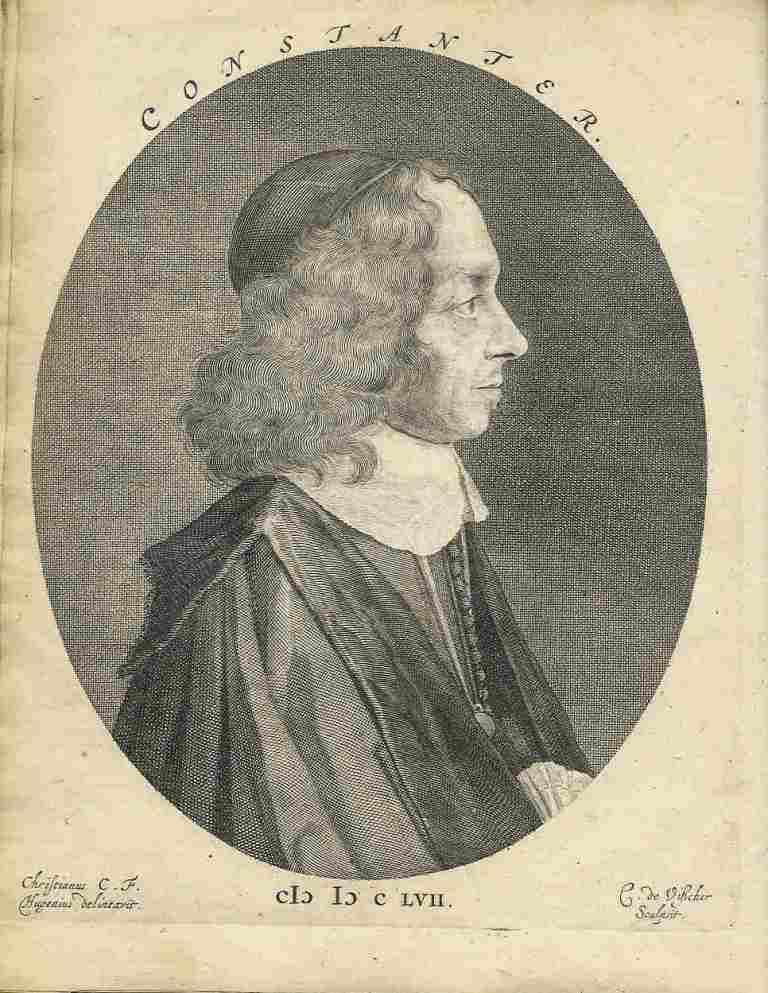 In his article, Held published a number of portraits of Huygens to support his identification of the male sitter. However, he somehow overlooked the profile that comes closest, which I show here, alongside a reverse image of the painted portrait. This is the image that adorns the collected Dutch poetry of Huygens, Koren-bloemen, 1658. Although it dates from more than 20 years after the painting, the resemblance is unmistakeable. The print is engraved by Cornelis de Visscher after a drawing by Constantijn’s son Christiaen Huygens, who was a gifted amateur artist as well as one of the most important scientists of his time. His discovery of Titan, the largest moon of Saturn, was crowned last week with the landing on that moon of a spacecraft named for him.

The incident had another happy effect in my life. Julius Held had been angry with me for certain remarks about his work in my 1984 book on Rembrandt. This pained me, and I was relieved when the Huygens affair led him to bury the hatchet. We corresponded thereafter about an Antwerp kunstkamer painting that I published in 1995, in an article dedicated to him.

The Netherlands and the museum world were shocked by the theft last weekend of more than 20 important paintings and much silver from the Westfries Museum in Hoorn. The museum claims that its security arrangements were up to a high standard. If they were, then the standards for anti-theft protection are obviously not high enough. See http://www.codart.nl/news/58/.