The choice of subjects in a new exhibition of Dutch pictures from the British Royal Collection is compared with that in a 1971 predecessor to this show. Schwartz detects a shift from aristocratic sporting subjects to poor man’s scenes from daily life. Until 30 October, the visitor can go from Buckingham Palace to Dulwich Picture Gallery to admire another royal collection, including splendid Dutch paintings. Assembled for the last king of Poland, it ended up, 20 years after his abdication, in a London suburb.

So many Dutch paintings does the queen of England own – about 250 of them – that the curators of her collection can pick and choose among them to give their exhibitions of her Dutch school pictures quite an individual character. Yesterday saw the opening in the Queen’s Gallery, adjoining Buckingham Palace (on the left side, in Bird Cage Walk), of Enchanting the eye: Dutch paintings of the Golden Age, put together by the Surveyor of the Queen’s Pictures, Christopher Lloyd. The show includes 50 paintings by 38 artists. In 1971 Lloyd’s predecessor, Sir Oliver Millar, mounted a show from the same large group of works, under the title Dutch pictures from the Royal Collection, with 75 paintings by 41 artists. Only about 40% of the paintings in the earlier show are included in the new one.

Laying the two catalogues side by side, the differences are unmistakeable. The paintings included by Sir Oliver that Mr. Lloyd has left out tend to fall into a number of recognizable categories. Given the smaller number of paintings in the present exhibition, Lloyd had to reduce the number of examples all along the line. However, his heaviest cuts are in certain specialties. Compared with the older show, there are far fewer military encounters, pastorals, portraits of royalty and sporting subjects – horses and hunters and game. Instead of images such as these, which reflect aristocratic pastimes and concerns, Lloyd gravitates toward a more bourgeois vision of Holland. Adieu court portraitists Daniel Mytens, Gerrit van Honthorst and Adriaen Hanneman. Welcome painters of everyday life Isaac van Ostade, Jan Miense Molenaer and Barent Graat.

As much fun as it might be to speculate about personal characteristics that could account for this shift – taste, generational prejudice, class identification – I prefer to leave that to people who know both men well. The contents of their catalogues offer grounds for more concrete suppositions. Millar is more interested than Lloyd in the history of the collection, and Lloyd more interested in the interpretation of the subject matter of Dutch painting than Millar. Millar’s choice reflects the preferences of the historical collectors, while Lloyd’s is attuned to present-day scholarship on the iconography of Dutch art. Either way, the results are sheer delight for any lover of Dutch art. Not all of the queen’s great Dutch paintings are on view. Rembrandt’s double portrait of Jan Rijcksen and Griet Jans, known as The shipbuilder and his wife, is not in the present show. Actually, that is all the more reason to catch this selection. The reprise to which we can look forward in 2039 or thereabouts will have a different cast yet.

How and why did the British royal family come into possession of such large numbers of important Dutch paintings? The older nucleus of the collection dates from the 17th century, when the Houses of Orange and Stuart were bound by blood and when Britain, lacking enough native talent to satisfy the growing desire for fine objects, was virtually an artistic colony of the Netherlands. King Charles I set the tone, taking Dutch and Flemish artists into his service eagerly. The assumption that Charles’s conspicuous patronage was intended mainly to bolster his prestige is often embraced too easily. The father of modern patronage studies, Francis Haskell, once delivered a lecture on this subject in Rotterdam. There he pointed out that if Charles I’s patronage was intended to impress visitors to his court, then it was a miserable failure. Haskell dared to advance the suggestion, heretical in these days of the Sociological Imperative, that Charles was driven first of all by sheer love of art.

Charles’s only successor who shared his weakness seriously was George IV (1762-1830), in whom the desire to own art was linked to other, increasingly extreme forms of self-indulgence. He came on the scene, first as Prince of Wales, then as regent and finally as king, exactly at the right moment to take advantage of the influx into Britain of choice French and Dutch art collections in flight from Continental revolution. Most of the important Dutch pictures in the royal collection were acquired by him between 1805 and 1820. 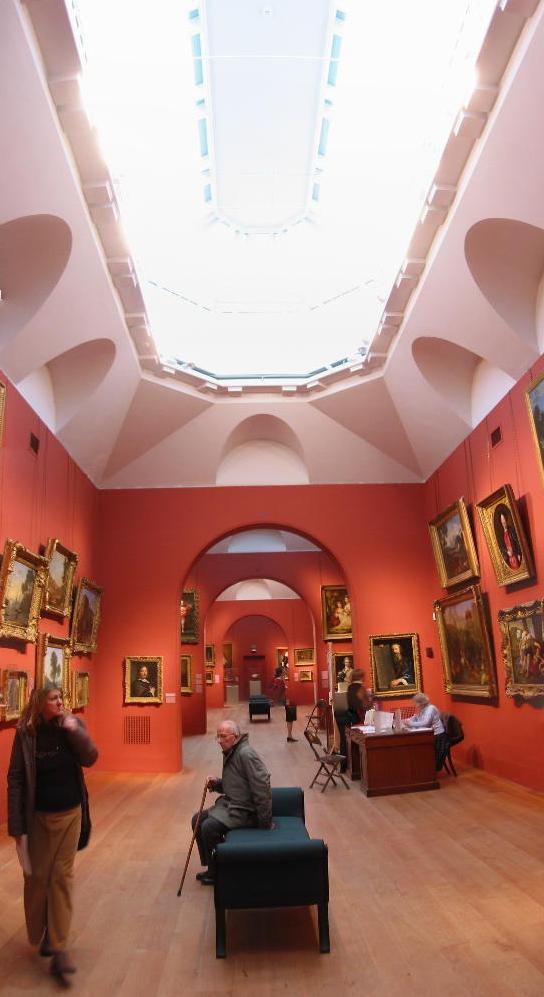 The main painting galleries of Dulwich Picture Gallery, built to the design of Sir John Soane in 1811-14

As it happens, suburban London houses part of another royal collection from those turbulent years. The extraordinary Dulwich Picture Gallery is founded on the bequest of the artist and art dealer Peter Francis Bourgeois (1756-1811), a Swiss living in London. These include 180 paintings that Bourgeois and his French partner Noël Desenfans had assembled for the last king of Poland, Stanislaus Augustus Poniatowski (1732-98; king from 1764 until his abdication in 1795). The dealers had been charged by the king with finding suitably outstanding paintings for a national gallery he wished to establish in Warsaw. They were well along when the nation for which the collection was destined passed out of existence, as in 1795 Poland was divided between Russia, Prussia and the Habsburg Empire; Stanislaus Augustus abdicated. Desenfans and Bourgeois offered their ready-made royal collection to various parties, a lifelong attempt in which they failed. In the absence of a buyer for the whole, they sold off individual pieces, which they replaced with others. It was this collection that, after the death of Desenfans in 1807, was left by Bourgeois to Dulwich College. The rich Dutch holdings complement the British royal collection nicely.

Until Enchanting the eye closes on 30 October, the visitor can enjoy a wonderful Royal Dutch day in London: the Queen’s Gallery is a 10-minute walk from Victoria Station, West Dulwich a 10-minute ride from Victoria on the Oprington line, and Dulwich College Gallery a 10-minute walk from there. Satisfaction guaranteed, especially if you can avoid thinking about Charles I on the gallows, Stanislaus Augustus dying in disgrace and George IV succumbing to laudanum and alcohol. Did anyone ever say that art collecting was good for the health?

The Netherlands is in a funk. The government, lacking any real ideas of its own, thinks that the best answer to security fears is to sacrifice human rights. Although our center-right government consists of reasonably honest individuals with little tendency toward demagoguery, this development poses a real threat to the country. A new draft law would allow local governments, without a court order, to curtail the freedom of any person against whom they harbor suspicion. This may sound like a relatively innocuous measure in the face of murderous fanaticism (or gang warfare, or organized crime, or child murder, or pyromania, or the spread of contagious disease or any of a hundred other dangers to society), but it needlessly undermines the protection of individuals against the arbitrary exercise of state power. Moreover, experience teaches that measures of this kind are going to victimize a hundred false positives for every genuine conspirator and therefore defeat themselves. The one member of parliament from a government party who spoke against the measure, Boris Dittrich of D66, unaccountably opposed it only on practical grounds, not on grounds of principle. This bodes ill for the future of human rights here. As decent as the average Dutchman may be, no system of law should fall back on the presumption of decency. Too many people wielding power behave decently only when forced to.