Over the course of the years, Schwartz’s pleasure in taking the train from his local station in Maarssen has declined drastically. However, the station has risen immeasurably in his esteem now that he knows that it was here, in June 1845, that the Doppler effect was first demonstrated experimentally. In his new enthusiasm, he launches a plan to commemorate that event in art whenever a train passes the station.

Since moving to Maarssen in September 1968, I have taken the train to or from the railroad station here well over 2,000 times. This has been a mixed pleasure. In 1968, Maarssen had a small, distinctly village-quality station that must have dated from around 1900. In the 1970s, when Maarssenbroek rose from the meadows, this pleasantly old-fashioned building was replaced by a larger, run-of-the-mill new facility that in time was provided with a small, senseless general store. Several years ago the station was closed down by the Dutch railways (NS) for reasons of safety, so it was claimed. A new station, built into a sizeable office building, was completed last year but has not yet been taken into use. [Postscript May 2010: the manned station is still not open. Postscript April 2017: a manned station never did open.]

Panorama looking north from Maarssen Bridge over the Amsterdam-Rhine Canal and the railroad line, at the height of building activity on the railway line, the station (upper left center) and a housing development beside the tracks, 2003. At this stage of the work, it was every passenger for himself.

Whether Maarssen Station was so much less safe than others that its staff could only be protected by closing it down, I dare not say, though I have my doubts. My own diminished enjoyment of train travel over the years has other causes: rampant vandalism; NS indifference toward this problem; the ugly and uncomfortable rolling stock; and the inability of the NS – improved over the past year, I must say – to provide reliable service. Add to this the annoyances of a construction project that has been going on for years – inferior and muddy temporary access features; poor bicycle racks (now replaced by excellent ones); the loud radios of the construction workers – and my old small pleasure of taking the train from Maarssen Station was largely replaced by irritation.

But all of this was made good a few months ago when thanks to the serendipitous largesse of Google I discovered that Maarssen Station had a moment of immortal glory. It took place not long after the opening of the Amsterdam-Utrecht line, on which Maarssen lies, on 18 December 1843. The availability so close to home of monsters of speed capable of reaching velocities of 72 kilometers an hour stimulated the young Utrecht University instructor C.H.D. Buys Ballot (1817-90) to perform an experiment that would make history. It concerned the demonstration of the Doppler effect. On 25 May 1842, in Prague, the Swiss physicist Johann Christian Doppler gave a lecture on the color of light from double stars. Light travels in the form of waves, he said. Its color is a function of the frequency of those waves. It stands to reason, therefore, that if an observer is moving toward a light source, the waves will come quicker, with a higher frequency and a different color than when he is moving away, with a lengthening of the frequency. In terms of the actual astronomical phenomena he was discussing, Doppler was wrong. The differences in color he noticed had a different cause than he thought.

When he took his degree in 1844, Buys Ballot criticized Doppler’s paper in a stelling, one of the concise statements that accompany the dissertation proper in Dutch universities. However, he was intrigued by Doppler’s relation of movement to wavelength, and began looking for a way of testing it. When he did, it was not for the color of light, but the tone of sound. Sound too, Doppler had reasoned, being a wave, the same effect should prevail. The tone of a sound should be higher when source and observer are approaching each other and lower when the distance between them is increasing. Being more of an experimenter than a theoretician, Buys Ballot would not accept this without a demonstration. With the gracious cooperation of the railways, he was able to organize one between Utrecht and Maarssen.

Because no instruments existed for the measuring of tones, Buys Ballot had to rely on the human ear. Gathering a group of Utrechters with recognized sensitivity to pitch, he placed them along the tracks for one part of the experiment and on a riding train for another. The source of sound was a professional musician blowing a g from the moving train or from the ground as the train passed. The observers were asked to quantify the distance from g of the sounds they heard. In two days of experimentation (3 and 5 June 1845), conducted at various speeds, Buys Ballot was able to prove the existence of the Doppler effect, which he then reduced to a formula. Although neither he nor Doppler could think of a practical application for this phenomenon, it has turned out to be immensely useful in fields as different as air traffic control and larval biology.

Since I found this out, in an Internet article by Niek Exalto of the Spaarne Hospital in Hoofddorp (a gynecologist who employs Doppler echoscopy) and Harry Geurts of the Royal Netherlands Meteorological Institute (KNMI, founded in 1854 by Buys Ballot), my appreciation of my local station has risen unrecognizably. Whenever I am waiting for my train, I think with satisfaction about Doppler and Buys Ballot and their interesting, understandable and observable law of nature. As it happens, the local trains leaving from Maarssen are always preceded by express trains that race past the station at speeds up to twice 72 kilometers an hour, creating a Doppler effect of their own. 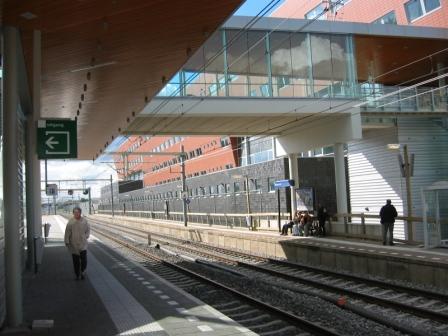 Maarssen Station in June 2004. Beneath the overpass is the spot to calibrate the Doppler effect generated by express trains from Amsterdam to Utrecht. Projection possibilities abound.

In contrast to the 19th-century physicists, I do have a practical application for my discovery. How wonderful it would be if an artist were to create a living demonstration of the Doppler effect at the spot where it was first measured. The sounds of express trains approaching and speeding away from Maarssen Station could be picked up and converted into a light display of some kind, whose color will change as the train passes. In order not to constrain the freedom of the artist, I will say no more. However, I do have a target date: on 3 June 2005 it will be 160 years to the day since Maarssen Station entered the history of science. That should be the day for it to re-enter, if not with the actual installation, at least with the announcement of the project. [P.S. 22 May 2010. With the 165th anniversary coming up, the plan is on my sizeable heap of unexecuted projects.]