Genius, Schwartz posits, begins with the ability to think faster than the common run of humanity. He demonstrates this proposition with reference to Saul Kripke, Big Willy Horton, Mozart, Rembrandt and Lodewijk Houthakker.

In 1967 I attended a lecture at a conference on logic by the famously eccentric American philosopher Saul Kripke, who was staying with us and ate six scrambled eggs for breakfast. He paced up and down the platform in a packed ballroom at Hotel Krasnapolsky in Amsterdam, looked out at the audience and barked, “OK! Assume the capability to perform an infinite number of computations in a finite length of time." Since I did not understand a word of the rest of the lecture, afterwards I asked Kripke, the friend of a friend, what it was about. “I proved the existence of God," he mumbled.

Whether or not his proof still stands I don’t know, but his words took on human meaning for me in 1981, listening to Big Walter Horton at the Blues Estafette in Utrecht. Listening to the man’s timing, I was seized with the conviction that he was performing not an infinite but an infinitely larger number of computations per length of time than I. Some of his notes were not the quarter- or eighth-notes of the blues, but something more like 1/576th notes. To place them the way he did he must have been experiencing time differently than I, with more of it as his disposal for any given interval, like Kripke’s God.

In euphoria, I decided then and there that that was Mozart’s secret as well. In my attempts to play his piano sonatas, I had to divide the bar into many more segments than 6/8 or 4/4, but I could never get enough extra counts in, in proper tempo, to turn the notes into music. Real pianists can, of course, but thanks to Big Walter’s revelation, Big Wolfgang became for me a Kripkean God. He was capable of stretching time, filling it in on superhuman scale and then collapsing it for the benefit of us slower mortals. At the start of the Mozart Year, I submit this tribute to his genius.

And the Rembrandt Year? Time would not seem to play a vital role in the arts practiced by Rembrandt. Other than meeting a deadline, why should timing matter to a draftsman, etcher or painter? Well, it did, in a surprising way that astounded his colleagues. In the “Best of" lists of the time, Rembrandt’s foremost excellence was said to be the depiction of emotions. Trying to explain how he did this so well, Arnold Houbraken wrote that he employed an “amazingly accurate mental picture" that was a function of speed. “By capturing the emotions in the fleeting moment when they display themselves, he is able to imprint them and use them, a rare inborn quality." Houbraken was out to teach method, and he had to report to his regret that Rembrandt’s method, the best there was, could not be taught because it depended on exceptional personal gifts. The excellence of his art was a function of his ability to stop time in its tracks.

2006, the year we have chosen to honor Mozart and Rembrandt, lasts 365 days. Make as much of them as your genius allows. 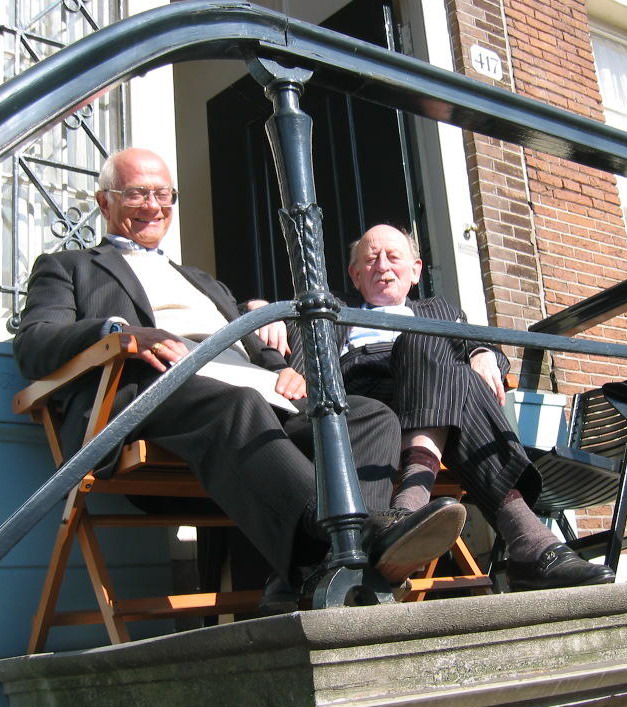 Lodewijk Houthakker (right, with striped suit and cigar) and George Abrams captured by the author on the stoop of Houthakker’s house on the Herengracht, Amsterdam, on the warm Sunday afternoon of 7 March 2003

For decades, our old friend the art dealer Lodewijk Houthakker has given a birthday party once every five years. On a Sunday afternoon in January of what the Dutch call a lustrum year, 60, 65 and so on, he would invite a crowd of very nice people to his house in the Golden Bend of the Herengracht in Amsterdam. There was champagne and a table where oysters were shucked as fast as the guests could eat them. To belong to the party gave everyone the feeling of being special. Lodewijk only invited people he liked.

Sunday a week ago we celebrated Lodewijk’s 80th birthday exactly that way. This time it wasn’t he who sent out the invitations, though. Over the past half year he has descended into senility. At the party, for which he was dressed as nattily as ever, he circulated among the guests, giving everyone a friendly smile and gentlemanly greeting, over and over again. The party was tinged with melancholy, which made it more special. One of these days the dedicated friends who are caring for him will move him to an old-age home.

Lodewijk, who in his time was pretty sharp, isn’t performing that many mental calculations anymore. It is easier to recognize someone slower than you than faster. But there is an equation here: Rembrandt and Mozart are to me as I am to Lodewijk.