A friend of Rembrandt’s wrote four poems on The hundred-guilder print. Only two of them, sweet thoughts on the goodness of Christ, are cited in the literature. The third one, a concise statement of classical Christian anti-Judaism, has been repressed in the Rembrandt literature. Schwartz insists that we acknowledge that Rembrandt shared the same attitudes toward the Jews of all his contemporaries and that he was not sympathetic to Judaism. 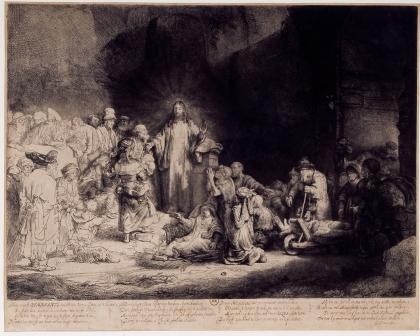 Rembrandt, Christ among the sick, allowing the children to come to him: “The hundred-guilder print”, ca. 1649. Bartsch 74 ii(2)
Paris, Bibliothèque Nationale de France. Impression with handwritten poems by Hendrick Waterloos.

Ideas one would rather not associate with Rembrandt’s masterpiece of religious art, the Hundred-guilder print, were put into words by a friend of the artist who considered himself to be an interpreter in poetry of Rembrandt’s art. The etching shows Christ among the sick, allowing the children to come to him, confounding the Pharisees and bringing God’s word to mankind. The following reflections on the subject were written by Hendrick Waterloos, in the third of four quatrains on the print.

The Messiah performed a thousand miracles for the benefit and salvation of the Jews. He did this out of goodness, in a very different spirit than the vengeance of the God worshipped by the Jews. How did they respond? Alas, by crucifying the one who was sent to them, God’s son. The blood of the innocent Lord remains on their hands. By killing him they forfeited the right to be called his people. We Christians are now the people of God, not the Jews.

These sentiments were as far as I know shared by all Christians without exception in Rembrandt’s time, and therefore by Rembrandt as well as Waterloos. They are incorporated in other majestic creations such as the Passion Play of Oberammergau (1634) and Johann Sebastian Bach’s Johannespassion (1724). Moreover, the words, phrases and articles of faith in those unpleasant sentences come for the most part directly out of the Gospels. Indeed, few Christians of any age do not believe that they have replaced the Jews as God’s people.

It is not to be expected that Rembrandt-lovers be subjected to the outrage and opprobrium poured out over the burghers of Oberammergau and, on occasion, performers of Bach’s St. John Passion. But why, we may ask, has Rembrandt gained a reputation that would be unique for any Dutch Christian of his time, as a person sympathetic to the Jewish religion? In part, it is simply because the relevant evidence has been kept out of the writings on him. The poem by Hendrick Waterloos was printed as far as I know once and once only, one hundred years ago, in Cornelis Hofstede de Groot’s Urkunden über Rembrandt (1906), a standard authority known to all students of the artist. Since then, the first two of the four poems by Waterloos, expressing tender feelings about Christ and the sick, Christ and the children, have been quoted frequently in connection with the Hundred-guilder print, but the third poem never. Two recent American books devoted entirely to the subject of Rembrandt’s relations to the Jews do not refer to it at all. With no supporting evidence as pertinent as the contrary evidence of the third poem, the authors maintain the view that has become traditional, that Rembrandt had a positive attitude toward Judaism and the Jews around him.

There is a difficult problem here, not unrelated to the problems we are currently experiencing in our attitude toward Islam. How do you maintain real respect for people who believe things you abhor? Perhaps Rembrandt can help. If we acknowledge the anti-Judaism in his work while preserving our love for his art, we might have a way to acknowledge that Islam teaches values that are reprehensible to us while cultivating respect for believing Moslems. This process begins by talking about things we would prefer to ignore.

This is a mini-prepublication from my forthcoming book on Rembrandt, which is now on track for publication on time for the 400th birthday on July 15th. The business of Rembrandt and the Jews kept coming up in the writing, with the conclusion always tending the same way. Rembrandt was a pious Christian, and that determined his attitude toward Jews and Judaism. Fundamental rejection, period. The rest is wishful thinking.

Readers in Budapest are invited to a lecture that I am giving on Friday morning, 31 March, 11 a.m. at the Szépmüvészeti Múzeum: Reintroducing Rembrandt.