The death of Karel Appel prompts reflections on the two most successful Dutch artists of the second half of the 20th century, Appel and Dick Bruna. Their resemblances are more interesting than the differences between them. Schwartz adds an outraged P.S. on Rita Verdonk and Ayaan Hirsi Ali, the subject of Schwartzlist 255.

Karel Appel, who died earlier this month at the age of 85, may have been the Dutch artist most favored by collectors in the second half of the twentieth century, but his reach fades to insignificance compared with that of the Dutch artist most favored by children. Even if they do not know the name Dick Bruna, his child bunny rabbit Miffy (Nijntje) is a familiar friend to millions of children in countries where Appel is unknown. The relationship of those children to Miffy is something any artist would die for. She is not only a pal to but a part of themselves. She infiltrates the self-images of children, providing them with a model for their own behavior, their own drawings, their own first words. And then she stays with them for life. 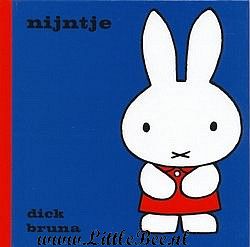 The correspondences between Appel and Bruna are not trivial. In the 1940s Appel made a deliberate attempt to revert to childhood in his art. His aim, he said, was to make paintings as unselfconscious as children’s drawings, an ambition one senses in Bruna’s Miffy as well, who came into being in 1955. (The first book in Bruna’s list of publications, also from 1955, was called De appel, The apple.) Appel’s main motifs were children and animals. One of his best-known paintings of children from those years, made for the city of Amsterdam in 1949, shows striking similarities to Miffy. The figures are simple geometrical forms outlined in solid black coloring-book lines, in a few flat colors. 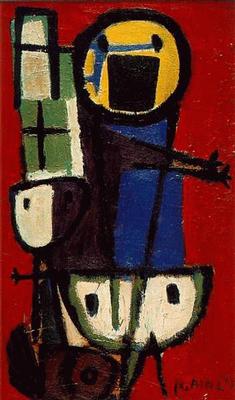 The differences between the hip Appel and the square Bruna are overwhelmingly obvious. Bruna’s Miffy lives in a strait-jacket format, Appel’s paintings spill over onto whatever adjoining surfaces are available. Miffy is a projection of childish purity and innocence, Appel’s children of the beast in man. So obvious are the differences though that I find myself more fascinated by the resemblances.

Another of these has to do with food. On its English-language website, the Stedelijk Museum translates the title of its painting, “Vragende kinderen," as “Questioning children." As Appel explained the subject in the 1940s, however, the children were not questioning but, in other meanings of the Dutch word “vragende," petitioning, requesting, begging – for food. They were the hungry displaced children of post-war Europe. That much tragedy seems to be lacking in Bruna’s more sentimental child animals. But Bruna tells a story that makes one wonder. He once received a letter from the father of an anorectic Korean teenager. “Dear Mr. Bruna," he wrote, “my son refuses to eat anything that Miffy does not eat. But Miffy does not seem to eat anything." Bruna says that he leafed through the 25 Miffy books and found to his surprise that his baby rabbit never gets anything to eat. With the help of a nutritionist, he put together a strengthening diet for a hunger patient and sent it to the boy with assurances that this is what Miffy ate. The children of Appel and Bruna alike are underfed.

Do these themes have anything to do with the fact that the world has lavished on these two Dutch artists greater wealth than on any of their many thousand contemporaries, some of them equally talented? Bruna is listed as one of the 500 wealthiest individuals in the Netherlands, and Appel was worth even more. Do they owe their success on this scale to superior contact with their inner child – a hungry inner child – and the ability to put it to work in their art?

In the previous installment of the Schwartzlist I expressed the hope that Ayaan Hirsi Ali leave the “Liberal" party of the xenophobic Minister of Immigration and Integration Rita Verdonk, the VVD. Since then dramatic events have taken place about which most of you have read and about which several of you have asked me to comment. The upshot is that Hirsi Ali is leaving not the VVD but the country. On the basis of a television documentary about the way Hirsi Ali acquired her Dutch citizenship by lying about her name, age and history, and a question from the equally xenophobic Member of Parliament Hilbrand Nawijn, Verdonk had a kangaroo investigation conducted, which led her within three days to write a letter to Hirsi Ali telling her that “for the time being," she must be considered never to have acquired Dutch citizenship. Within hours, Hirsi Ali announced to the Dutch and international press that she was quitting Parliament and leaving the Netherlands for the US, where she is going to work for the anything but liberal think tank American Enterprise Institute. She embraced her dear friend Verdonk to show that there were no hard feelings.

I look at it this way. The feelings of Hirsi Ali have little to do with the case. What happened is this. A member of the cabinet, acting on authority of the Dutch government, performed a deed of criminal recklessness. By law the lower chamber of Parliament must consist of 150 members and all members must be Dutch citizens. In challenging Hirsi Ali’s nationality, Verdonk undermined the legality of Parliament. She did this without the approval of the prime minister, who afterwards stated that he was aware that Verdonk had written her letter, but that she had given him the impression that “for the time being" it would not be sent.

To my mind, there was only one proper reaction to this provocation on the part of Verdonk. Parliament should have demanded that the prime minister dismiss her immediately; that he institute criminal proceedings against her for abuse of office; that he declare the minister to have acted illegally; that the letter be considered as never having been written; and that the prime minister actually do those things. What happened instead was a sickening display of inefficacy. Parliament convened in an emergency sitting and after hours of moral grandstanding all the major parties supported a VVD motion requesting the minister to reconsider her decision. In other words, instead of challenging the legality of her act, Parliament confirmed it. In doing so, it effectively ceded its constitutional prerogatives to a rogue minister. To my mind, Dutch democracy has “for the time being" ceased to exist. We are being ruled by a putschist government.

I’m trying to stay calm, but it is driving me crazy that no one else is discussing the event in these terms. I wrote a private letter about it to a befriended M.P. I know as a brave man and a constitutionalist, and his reply was as evasive as the behavior of the rest of Parliament. What makes things worse is that Verdonk has a real chance of becoming the next prime minister. My only hope for a positive outcome to this extraordinary chain of events is that Hirsi Ali, willingly or not, explodes the hypocrisy of the American Enterprise Institute as effectively as she split the VVD.

Strängnäs, Sweden: Hotell Laurentius, where Loekie and I stayed for three nights, and Strängnäs Cathedral, seen from the dockside restaurant, May 2006

In the meanwhile I am enjoying life, and how! I have handed in the last of the copy for my book and although I keep checking proofs the real pressure is off. This month I gave a number of presentations on Rembrandt at the Rembrandt House before delivering a public lecture on the artist at the Dutch embassy in Stockholm. Loekie and I then spent seven more lovely days in Stockholm, Gripsholm and a town we both love, Strängnäs. On Monday I am the guest lecturer at a seminar at the Ecole du Louvre.

Next month, aside from precious time at home and my work for CODART:

7 June: public lecture (studium generale) Part One on Rembrandt in the senate chamber of Utrecht University.

14 June: ditto, Part Two. The lectures of 7 and 14 July are being recorded by Home Academy for publication on CD and on Internet.

16 June: Public lecture on Rembrandt at the National Museum of Art of Romania, Bucharest, with a weekend in the city as a guest of the museum.

21 June: "Rubens in Holland, Rembrandt in Flanders" (in Dutch) at the Royal Flemish Academy of Science, Brussels.

29 June-1 July: Motovun Group Association meeting of art book publishers in Dresden, which I have not (yet?) been invited to address.

More on July later, if and when the above has been accomplished creditably.