As the story is now told, the decline of the 18th-century city of Savannah has been reversed by two events in the arts: the growth throughout the historic center of the Savannah College of Art and Design and the phenomenal success of the novel Midnight in the garden of good and evil by John Berendt. Schwartz hopes that art also has solutions for the problems created by the large-scale gentrification attending this development. 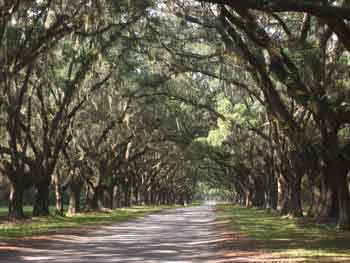 Part of the mile-long avenue of oaks leading to Wormsloe,
an 18th-century estate outside Savannah.

In the admittedly limited perspective that I acquired in a four-day first visit to Savannah, Georgia, I was left with the extraordinary impression that an 18th-century city that had been spiraling downward into terminal decay was saved by a single school and a single book. Maybe it had something to do with the fact that I was the guest of the school, the Savannah College of Art and Design (SCAD) and that I was reading the book. But there was no denying what I saw. A school that was founded in 1978 in a single building in the two-and-a-half square mile Savannah Historic District – the largest protected area of this kind in the US – now has more 7000 students, 400 faculty members and 900 staff working in some 60 buildings. Nearly all of the buildings were rundown historic properties that the College bought, restored and converted for its use.

The population of teachers, artists and staff has brought in lots of cafés and restaurants – though not, I think because of strict zoning laws, many retail shops. The eating establishments all seem to have art by SCAD people on the walls. Even Savannah Airport had showcases filled with SCAD work. The school interacts with and put its mark on Savannah on all levels. Turn your imagination loose on the effect of an institution of this kind can have on real estate, local government, city planning, the economy, and you will stand in amazement, as I did, at the extent of the change that can be brought about by one inspired initiative.

The streets that I am told were deserted a few years ago are now filled not only with students and SCAD staff but also with tourists. The billion-dollar tourist boom in the Historic District of Savannah – the city has other areas that were not transformed by SCAD and tourism – was sparked largely by the phenomenal success of a novel. John Berendt’s Midnight in the garden of good and evil was on the New York Times best-seller list for four years after its appearance in 1994. The evocative descriptions of the uniquely well-preserved squares and buildings of Savannah, along with its story of murder and intrigue in Savannah society, turned the city overnight into a major tourist attraction. On the bus tour that I took of the Historic District, the well-informed guide felt obliged to point out the spots mentioned in the novel and shown in the film based on it.

I am powerfully reminded of the effect on Bruges of the publication in 1892 of Georges Rodenbach’s novel Bruges la Morte. In that book too a well-preserved but decaying historic city provides the setting for a story of alluring decadence, full of love and death. And it too transformed a city in decline into a magnet for mass tourism and a model for historic restoration.

Does there always have to be a downside? This may not be a simple question of cause and effect, but the gentrification of the Historic District and the adjoining Victorian District in Savannah were accompanied by the displacement of poor, mainly black, inhabitants to gang-dominated projects. Savannah now has one of the highest murder rates per capita in the US. It would be nice to think that art and literature have it in their power to transform this form of decline too into renewed life.

Friends in the American academic world raised their eyebrows when I told them I was lecturing at SCAD. The college has been criticized by professional organizations for a policy of not granting tenure to faculty and for its commercial bent. They may be justified in terms of the larger issues involved, but the faculty members I met at SCAD had been there a long time and were in no hurry to leave. In practice there might be not as big a difference between non-tenure arrangements and the parsimonious tenure policies of northern universities. Another circumstance that struck me is that all of them were Yankees.

One administrator I met was not. Désiré Hounguès, dean of the School of Liberal Arts, is from Togo. Over lunch, he told Loekie and me how he entered Boston University without credentials and about his ambition to publish a dictionary of his native language, Mina, out of the conviction that the status conveyed by literacy can do more for the advancement of inhabitants of a country like Togo than learning French. We have seldom had such a fascinating conversation. 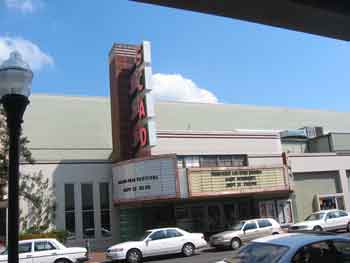 Schwartz, his name up in lights (middle line on the front), snowed under in Savannah. Yet, 750 people did show up for my lecture on 20 September.