The historical museums of Europe ignore minorities and therefore lend implicit support to xenophobic national self-images. The rise of high-quality Jewish museums serves as an excuse for historical museums to eliminate the Jewish dimension of European history from their displays. A campaign to redress the balance is called for.

Last summer, driving from Schleswig to Hamburg on Rembrandt missions, my eye was caught by one of those brown highway markers signaling the presence of culture in the vicinity. This one said Jüdisches Museum Rendsburg. My reaction was a bit slow. It wasn’t until two exits further that I convinced myself and my wife that it might be a long time before we were in Rendsburg again, so why not pop in now to see a museum on a subject that interests us. It was worth the detour. The museum, in a former synagogue and school, is a simple, tasteful presentation of Jewish history in the town, of Jewish religion and ritual in general and of Jewish artists from Schleswig-Holstein, complemented with a documentary center on the subject and a memorial for Jews killed by the Nazis. The prayer hall of the synagogue is heart-wrenchingly empty. 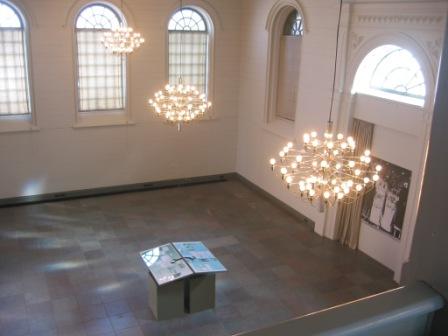 The former synagogue of Rendsburg, Schleswig-Holstein, now incorporated into the Jüdisches Museum

Admiring the display, it occurred to me that I could not recall seeing any material on the Jewish contribution to life in Schleswig-Holstein in the historical section of the far larger and better visited museum in Schloss Gottorf in Schleswig, which actually runs the Rendsburg museum. This struck me as not quite right. I took it upon myself to check whether the same separation of Jewish from non-Jewish history prevailed in other places with Jewish museums. Since then I have gone through the galleries of the historical museums in Amsterdam, Berlin and Paris, three cities with excellent Jewish historical museums, in search of material on Jewish elements in the life of these places.

The results confirm the Schleswig experience. The Amsterdams Historisch Museum has more on Jews than the Deutsches Historisches Museum in Berlin or the Musée Carnavalet – Histoire de Paris, but even that is limited to a single display case with a handful of objects and reproductions. Berlin has one stray text about medieval ritual baths and a circumcision knife, and Paris has nothing at all. In Berlin and Paris, after conducting a search of my own, I asked guards if I was missing anything. No, they said, we have nothing else. Then they brightened up and told me that there were entire museums on Jewish history that I could visit not far away.

In Paris I mentioned this to the director of the outstanding new Musée d’Art et d’Histoire du Judaïsme, Laurence Sigal. Wasn’t she concerned, I asked her, that the existence of Jewish museums serves to isolate the Jewish from the non-Jewish history of European civilization? Her answer made the entire issue even more disturbing. “There is no question of diverting attention,” she said. “Before we opened, Carnavalet had nothing Jewish. Our only loans from them are two tombstones.” If there are no Jewish museums, she implied, you will still find nothing at all about Jews in European historical museums.

This is not good. No history of Europe can be called complete or fair without acknowledgment of the role of Jews as well as other important minorities. To eliminate them from general history is not only historically inaccurate and intellectually indefensible. It also feeds the ineradicable strain of xenophobia in Europe, currently on the rise again. Non-Jewish historical museums support the false image of a national past free of alien stain.

For a start, every historical museum in Europe should examine this aspect of its displays and make the necessary corrections. In this, they should be urged along by Jewish museums, which should lend out – if necessary, with insistence – parts of their own collections and knowledge to the general historical museums. Even if Europe may not be as “Judaeo-Christian” as politicians and even churchmen have lately taken to saying, acknowledging the Jewish past on this continent is truly an indispensable condition for a healthy European future.

Within hours after this column appeared in print, I was called by a representative of an organization that is promoting attention for Jewish monuments in Europe. They hold an annual European Day for Jewish Cultural Heritage, in the spirit of the Open Monument Days that are increasingly popular. This is in itself excellent, but it is another instance of the separate presentation of the Jewish dimension of European history. What I was arguing for – and the man who called was in complete agreement with me about this – is an integral view of a Europe that had always included (and excluded) Jews, a campaign to pressure European historical museums, one after the other, to incorporate minorities into their presentations.

The thought takes on urgency in the Netherlands of the Fourth Balkenende Government. The Labor Party (Partij van de Arbeid) has joined a coalition of two Christian parties, Balkenende’s Christian Democratic CDA and the more sectarian Christian Union (ChristenUnie). In the coalition contract the Christian Union was able to get various points of its platform adopted, concerning “family values,” abortion and euthanasia. The ChristenUnie finds it more Christian to let unmarried mothers hand over their newborn infants for adoption rather than to allow abortion, and for terminally ill patients to be put into “palliative” coma rather than being allowed to choose the moment of their death. The respect for individual freedom that the Dutch have fought hard to put into law is being compromised in the name of Christianity, and the Labor Party is endorsing this development.

We have embarked on a century in which even in Holland Christianity is reclaiming political power while law-abiding Moslem Dutchmen are being threatened with deportation and loss of nationality if they voice opposition to the policy of integration. I could not believe my ears when that was said by the “Liberal” m.p. Henk Kamp two weeks ago. I’d better start believing my ears. I should keep my eyes open as well and regularly take a deep breath to smell for the stench of bigotry. My resistance to pessimism is being put to increasingly punishing tests.