No one who has been educated under the regime of the ayatollahs in Iran has heard of Rembrandt, according to research carried out by Schwartz in Shiraz, Tehran and Isfahan. Being kept in the dark not only about him but about Western culture in general adds to the discontent of the Iranians, who nonetheless treated Schwartz to an exclusive, tourist-free introduction to some of their greatest cities and monuments.

“Have you ever heard of Rembrandt?” By way of field research, I posed this question to Iranians of different ages at the end of June. I was there to deliver three lectures on Rembrandt in Tehran on Wednesday the 27th, and I wanted to know what to expect from the audience. The people to whom I spoke were educated English speakers, well informed about the art and history of their own country. One older man had heard of Rembrandt, but knew nothing more about him than that he was a famous artist. To a younger interlocutor the name meant nothing. He looked at me unhappily, knowing from the tone of my question that I was asking him something he should know. I was reminded of the disappointment in himself in my father’s expression when Alzheimer’s prevented him from coming up with some simple memory.

“What do you expect?” he asked me in return. “For thirty years we have had no culture. Only morals, morals, morals. Do you think we give a damn? They won’t let us have music or sex or alcohol. But we have them all.”

Indeed one of my drivers played a clandestine tape of melancholy music sung by Hayedeh, an Iranian singer who died in exile in Los Angeles in 1990. Her younger sister Mahasti had just died the day before, also in California, and my driver was sad. As for sex: at the lover’s-lane parking area at the Koran Gates in Shiraz, I saw the police pulling couples out of cars and giving them a hard time. “Walk on,” said my Iranian companion. “Don’t say anything.” He was disappointed to hear that the New York police treated me the same way in the 1950s and that I could not assure him that it happens nowhere today in the US, a country he idealized all the more for its being demonized by his government.

“Were the Pahlavis any better than the ayatollahs?” I asked him. “They were terrible in other ways. All of our regimes were terrible, all of them. The Qajars and the Zands and the Safavis – all of them were horrible for the people. Only the Achaemenids were maybe an exception.” Time heals all wounds, but the wounds inflicted on the Iranians by their own and occupying regimes since 330 B.C. are still too fresh to forget.

He then made a prediction that came true within hours. “They just announced a limit on cheap gasoline to start tonight. If we had anything at all to feel good about, people might accept this. But because we feel rotten about everything, there are going to be gasoline riots.”

That evening, on the ride from Tehran airport to my hotel on the Vali Asr Street, I found myself driving past a queue of motorists at least three kilometers long. They were lined up for service at one of Tehran’s few gas stations. Traffic slowed down; the closer we got to the head of the queue the thicker it got and the more tense the mood became. Finally we stopped altogether. I ended up walking the last stretch to my hotel. About eleven o’clock, an hour before the deadline for cheap gas, I passed the gas station where people were tanking who had been standing in line for eight or ten hours. Apparently someone had tried to jump the queue, because there was a ruckus going on, with fistfights and shouting. I filmed a minute of it, before a policeman ran up to me and commanded “No film.”

If people fight with each other in an expensive neighborhood in Tehran, I thought, elsewhere in the country blood will be shed. Indeed, the next day I heard that several gas stations had been set afire and that five people had died in riots. With only the slightest bit of exaggeration, we can say that if the Iranians had been told by their teachers about Rembrandt and other giants of world culture, they would not have reacted so violently to something as mundane as petrol rationing.

I must say that I had not expected to find so much unrest in a country that seems from the outside to be shut down tight. Ahmedinejad has an even lower approval rating than Bush. I wondered if the revolution would break out before I left. But the people I spoke to didn’t expect anything of the kind. For years, they had seen an incompetent and bigotted religious autocracy running a discontented country without any kind of opposition taking shape. “If you oppose them, they kill you,” is what I heard. Yet, a situation of this kind cannot prevail for long. If not a political revolution, then a military coup cannot be far off where a government is so far out of touch with the populace. 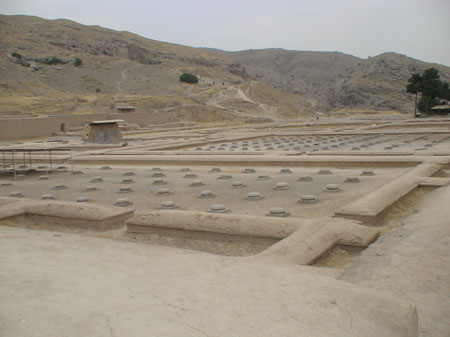 That was Tuesday night in Tehran. By Thursday in Isfahan nothing seemed to be wrong except for the lack of tourists. Which I must say was perfectly all right with me. With the possible exception of the Gemäldegalerie in Berlin, I have never had such high-quality art so much to myself. Enjoy it while you can, if you dare.