Cleaning up his desk is a luxury Schwartz cannot well afford. Doing it anyway, he came across a note from a Swede he met last year. The story behind it, concerning mysterious stone patterns in the brick tower of Strängnäs Cathedral, is told here, with an appeal to the reader to solve the mystery they pose.

Cleaning up my desk, I came across the following mysterious note, written on a sheet torn out of a small spiral notebook:

Now I see what you mean with the question you had about the stones outside who is different on every sides. I have asked but no one could give some answer. Maybe they are only for decoration. Kindly greetings from Liv Lekgård. 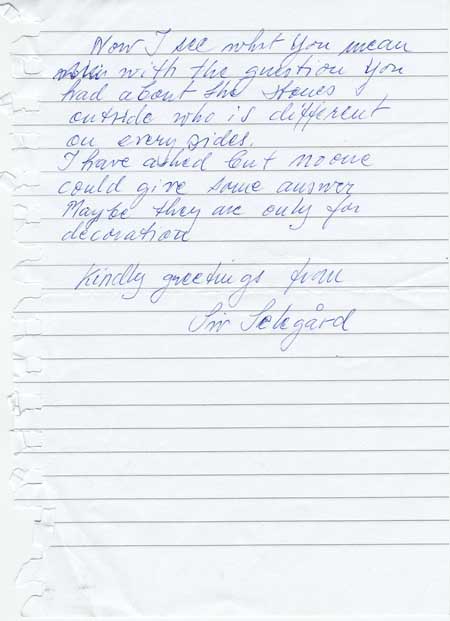 It all came back to me. Liv Lekgård is one of the caretakers of the magical cathedral of Strängnäs, 60 kilometers west of Stockholm on Lake Mälaren. In spring 2006 Loekie and I spent a few days in Hotell Laurentius just below the church and had time to inspect it thoroughly. The massive tower over the west end of the church alone, reaching for the clouds that race above Strängnäs, is worth the trip. The medieval bulk of the tower is built of large light red bricks. It is topped by a black tiled four-sided vaulted roof and a copper lantern in patina green, from a later period.

At the top of the brick body of the tower, which must have been built around the year 1300, there are striking horizontal markings in white stone extending across nearly the entire width. Walking around the church, we noticed that these were different on the four sides of the tower. To the west, above the entrance, are three standing rectangles connected in the middle by a thin string. On the south side there is a standing rectangle in the middle of the tower, flanked by five rectangles rounded at the top, unconnected, in decreasing size from the center to the edges. East shows two forms like the one on the west side, left and right, with a large rectangle in the middle. On the north are four standing rectangles interspersed by three circles, not quite evenly spaced.

In the church, we asked a woman attendant whether she knew the reason for the markings. She didn’t but she said that if anyone knew, it would be Liv. We were astonished that neither of them had ever even noticed the difference in design. Strängnäs Cathedral has more little games of that kind. A vast rune stone and an uncut boulder are built into the otherwise smooth masonry of the south wall. And in the interior, part of the articulation of the brick piers are painted over to resemble stone. Maybe, as Liv Lekgård thought, they are only for decoration. But I have my doubts. I was reminded of the fargoing system of numerological symbolism built into the town hall of Strömstad (Schwartzlist 81). Then, on a ride to a few of the country churches near Strängnäs, we found the same thing going on in Fogdö kyrka. On the east side of the tower there was a form like that on the east in Strängnäs, while the north face is adorned with four squarish rectangles flanked by a circle on each side.

I have mounted a page on Google Picasa (my first, it was a cinch) to show you pictures of these designs in architecture: http://picasaweb.google.nl/garyschwartzarthistorian/StrNgnSMay2006 [Returning to the page on 25 April 2019, the link no longer works. Too much of a cinch?]

Solutions to the riddle are welcome.

© Gary Schwartz 2007. Published as well on The Arts Fuse.

A note to subscribers who joined the Schwartzlist after April 2007. Because of a programming error following a revision of the Schwartzlist mailing manager, you did not receive notices concerning columns 278-81. To see what you have missed, click here.