One in so many Western works of art contains an image of a person we would call black. The phenomenon attracts relatively little attention in art history. The Menil Foundation went after it seriously, in a project now inherited by the Warburg Institute. An exhibition in the Nieuwe Kerk in Amsterdam offers a sanitized view of the black in Dutch and Flemish art.

Toward the end of the year 1984 I got one of those rare telephone calls that make a difference in your life. On the line was Ernst van den Boogert, a distinguished specialist in early Dutch contacts with non-European cultures. Van den Boogert is as unassuming as he is indispensible. If he had a request, I would fulfill it if I could.

This was more than a simple request. Van den Boogaart had been approached by a research institute in Paris and Houston, Texas, known as The Image of the Black in Western Art. It was put in place by the oil millionaire Dominique de Menil (1908-97), a formidable figure in 20th-century patronage of minority politics as well as art. Her own explanation of her motivation she put into words thus:

The decision in 1960 to launch a systematic investigation of the iconography of blacks in Occidental art did not proceed from any clear plan. It was an impulse prompted by an intolerable situation: segregation as it still existed in spite of having been outlawed by the Supreme Court in 1954. Many works of art contradicted segregation. A sketch by a master could reveal a depth of humanity beyond any social condition, race or color. So why not assemble these art works in an exhibition or a book? With such a naïve approach, a serious enterprise was started. 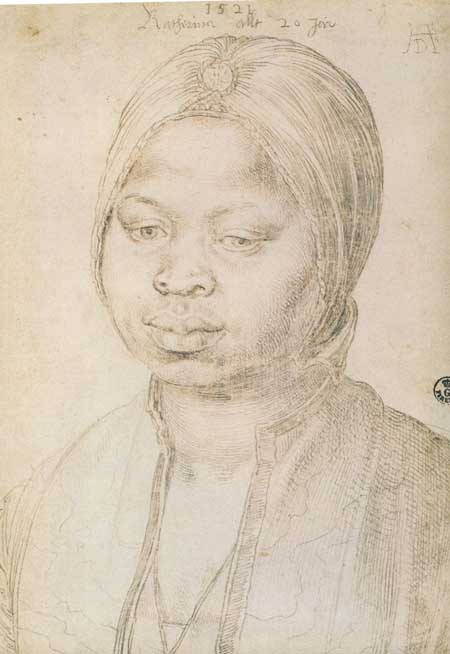 Albrecht Dürer (1471-1528), Drawing of Katharina, the shy 20-year-old servant or slave of the Antwerp agent of the king of Portugal, João Brandão, who provided Dürer with lodgings during his visit to Antwerp in 1521. Monogrammed AD, dated 1521 and inscribed Katharina allt 20 Jar. Florence, Uffizi. More humane and beautiful than this portraits do not come.

By 1984, the enterprise had published or contracted three of the four monumental studies it planned to bring out: 1: From the Pharaohs to the fall of the Roman Empire (1976), 2: From the Early Christian age to the “Age of Discovery” (1979) and 4: From the American Revolution to World War I (1989). But there was a life-size gap where volume 3 should be, covering the not insignificant period from about 1500 to 1800. This gap, which to this day has not been filled, was generated, as I see it, by two main causes. One has to do with the nature of the material. The authors of vol. 2, Jean Devisse and Michel Mollat, write in their summing up:

… the African was not seen for what he was and was shown for what he was not – in other words, … the testimony given was falsified by ignorance about Africa, the intolerance of the Christian faith, and the prejudices attached to the blackness of evil.

To interrupt the quote for a moment – note that Dominique de Menil did not interfere with the publication of less rosy-colored conclusions about the black in art than she was expecting.

Beginning in the late fifteenth century and for several decades thereafter, the image of the black, which for Occidentals had remained stable for a long time, exploded in diverse and contradictory directions.

In other words: in periods when the image of the black was governed by formal iconographical or heraldic codes, it can be studied as a relatively stable phenomenon. Its explosion in diverse and contradictory directions turned it into a moving target. One can even ask whether from that point on there was any such thing as the iconography of the black. Figures we call blacks occurred in divergent settings where they were almost never the main feature. The artists who made them were not giving shape to an iconography of the black, but to a certain type of servant or slave, merchant or diplomat, a Biblical character who was thought to be black, or in exceptional cases to a directly observed portrait of a sitter with dark skin.

Not only were the artistic expressions of the image of the black a moving target, so too, for present-day scholars, is the subject matter. Hugh Honour writes of the years following the First World War:

In these years the very idea of an image of “the” black typifying a vast section of the population of the world began to dissolve. Anthropologists revealed not only the variety of human groups assigned to this simplistic category, differing almost as widely in culture and physiognomy from each other as from Europeans, but also questioned the validity of the notion of race.

So the material was difficult to write about. But that is not the only or in fact the main problem. After all, Hugh Honour, tackling a period that was no less complex and fraught with irony than the preceding centuries, managed to overcome or incorporate his reservations in a survey and synthesis of immense value.

The larger problem was a dramatic case of editor’s block. The man in charge of the project, the Hungarian-French art historian Ladislas Bugner, was in fact the logical author of vol. 3. By 1984 he had been working on the subject for a quarter of a century and he had a better grasp on it than anyone else. Yet, out of a paralyzing mixture of humility and pride, Bugner refused to take on the task. Instead, he wrote long outlines and memos and letters for a score of consultants and prospective authors, entering into profound dialogue with them that never led to a publishable manuscript. He also liked long discussions at lunch, for which he favored a nice self-service restaurant called Melodine (now part of the Flunch chain; good value, no waiting, but no bistro glamour). Bugner’s warm personality and his pronounced stutter gave these exchanges enhanced intensity.

Ernst van den Boogaart was a natural for the project. But he felt the need of collaborating with an art historian, which is why he called me. For a few years I worked part-time for the Menil, building a database of their photographic holdings in the period 1500-1800, adding to it, combing published inventories from the period for references to blacks in works of art and feinting at essays or interpretations of individual objects. When I bowed out a few years later, vol. 3 was still hanging in the air.

Some ten years ago, I assume in connection with Bugner’s retirement, Dominique de Menil moved the project from Paris to the W.E.B. Du Bois Institute at Harvard University and the Warburg Institute in London. At a small meeting in Amsterdam on June 26th, Jean Michel Massing of the University of Cambridge said that he would be handing in the manuscript of a large book on the subject at the end of the year, a manuscript however that does not really meet the description of vol. 3. A book of studies, I assume, rather than a survey. He added in less concrete terms that the classical vol. 3 was also in the works. (See below.)

The occasion for yesterday’s meeting was the opening of an exhibition in the Nieuwe Kerk in Amsterdam, curated by Esther Schreuder and Elmer Kolfin, called Black is beautiful: from Rubens to Dumas. Although I am no longer working on the subject, it continues to fascinate me, and I have done what I could to help Esther Schreuder with research materials and advice.

The exhibition shows 132 displays in all media made in the Netherlands, mostly the north, from the Middle Ages until today. As the title indicates, the exhibition aspires to the same ideal that drove Dominique de Menil: “A sketch by a master could reveal a depth of humanity beyond any social condition, race or color. So why not assemble these art works in an exhibition or a book?” The exhibition has an openly partial purpose. As the director of the Nieuwe Kerk, Ernst Veen makes clear in the foreword, Black is beautiful does not pretend to present a neutral or critical examination of the image of the black. It is a demonstration that Dutch artists in every period were attracted to black models and subjects and were capable of depicting them as beautiful people.

One can and should debate the wisdom of this approach. From the prints after drawings by the Zeeland soldier-artist John Stedman for his book on Surinam (1796), an image is included of a Loango family of slaves (belonging to the “humane master” Stedman himself, we learn from the catalogue) personifying “prosperity and serenity.” But the infamous prints of torture and execution are only touched on in the text. Self-censorship goes so far that the exhibition and as far I can see the excellent but indexless catalogue as well do not even mention the single best-known image of the black in the Netherlands: Zwarte Piet (Black Pete), the mischievous assistant who accompanies Sinterklaas (St. Nicholas), often in gangs at a time, on his yearly visits to the country, especially to the children. After being taken for granted for most of the 20th century, Zwarte Piet has recently become controversial, but only mildly so. The sensitivity threshold for Black is beautiful is very low indeed. How Dutch blacks will respond to the resulting sanitized picture of the black in their society remains to be seen. I do not think that I would be unreservedly pleased if I were in that position. 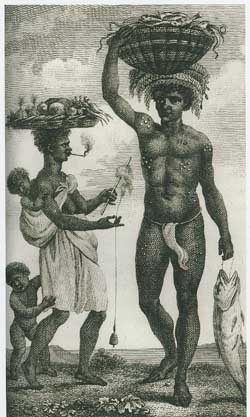 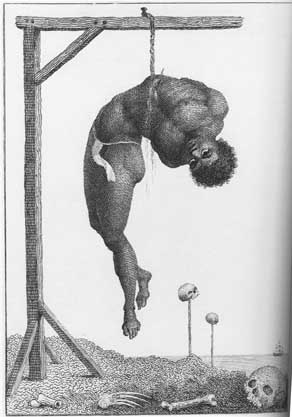 Two illustrations engraved by William Blake (1757-1827) after drawings by John Gabriel Stedman (1744-98) for Stedman’s book The narrative of a five years expedition against the revolted Negroes of Surinam (1796). For the Dutch edition copies of Blake’s prints were made by Reinier Vinkeles. In Black is beautiful the pacific image on the left is included, the horrific one on the right is not.

On the other hand, I do not know how happy I would be with an exhibition that did include torture and murder, intolerance and prejudice, caricature and contempt. The truth of it is, the entire subject is so full of raw edges, taboos and ambiguity that there is probably no way of doing it justice. It puts to the test not only our fond opinions about such holy cows as the Enlightenment but also about art itself. If artists were capable of “contradicting segregation” and “revealing a depth of humanity beyond any social condition, race or color,” why did they do it so seldom?

“This exhibition raises more questions than it answers,” someone said at the opening, in a complaining tone of voice. I repeat the same sentiment, in admiration. And beside that, beside other reservations, beautiful is good. Don’t knock it.

The last three volumes of the Image of the Black in Western Art, one of which Jean Michel Massing is doing, are being undertaken under the auspices of the W.E.B. Du Bois Institute for African and African-American Research at Harvard University, which is intending also to republish also the already-printed volumes. David Bindman, retired professor of art history at University College, London, is acting as general editor. Bindman hopes to see the volumes into print in the next two or three years.

The photographic archive of the Image of the Black in Western Art project exists in two
versions:
one at the Du Bois Institute at Harvard (formerly at Houston)
and the other at the Warburg Institute in London (formerly in Paris).

Published last month: Gary Schwartz, “The Temple Mount in the Lowlands,” in: The Dutch intersection: the Jews and the Netherlands in modern history, edited by Yosef Kaplan, Leiden and Boston (Brill) 2008, pp. 111-21

Updates to follow (or not, it depends) on visits of the last six weeks to Nancy, Dijon, Florence, Venice, Florence again, Genoa, Turin, Geneva and Cologne.