There are times when the behavior of an artist or a museum can fill you with disgust. Covered by the kneejerk respect for art displayed by society, they betray artistic and moral principles that you try to live by. What if anything do you do about it? Schwartz wrestles uncomfortably with the problem.

A few months ago a good friend, someone whose judgment I could not respect more highly, asked me to help convince the Rijksmuseum not to give Damien Hirst the run of the place with his exhibition “For the love of God.” She was understandably incensed by the whole business. That the cast of a skull studded with diamonds, being marketed by the artist and his backers for tens of millions, should be displayed respectfully in a serious museum struck her as a violation of the values that brought us to art in the first place and for which a museum should stand.

The Rijksmuseum certainly opens itself up to criticism of this kind. From the online press release: “The exhibition is in two parts: the world-famous diamond encrusted skull and Hirst’s personal selection of sixteen 17th-century paintings from the Rijksmuseum collection. Each painting is accompanied by a personal commentary by Hirst explaining the reasons for his choices. Themes in the exhibition range from the quest for immortality to the inevitability of death, all of which are frequently reflected in the art of the Dutch Golden Age and are relevant to Hirst’s ‘For the Love of God.’”

In saying this, the museum flirts with an equation between Dutch art of the 17th century, with its high ethos, and Hirst’s cynical egoism and unashamed worship of worldly success. The museum’s choice of images in its press file, juxtaposing Hirst as a devilish mocker to a vanitas still life by Abraham van der Schoor, speaks cynically for itself. 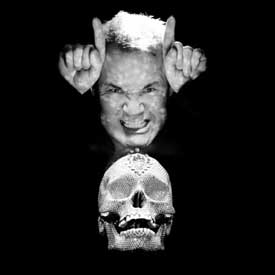 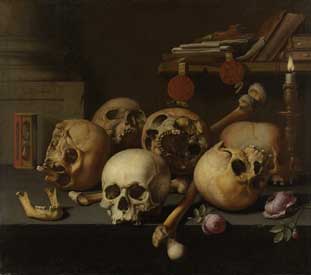 My friend felt that this not only glorified Hirst unjustifiably; it also falsified the nature of Dutch painting, which the Rijksmuseum more than any other museum was called upon to bring to the public with scholarly integrity. Not expecting her outrage to lead to a cancellation of the show, she appealed to the conscience of the museum for another purpose. She requested to be allowed to mount a counter-exhibition during the Hirst show to make her point. Unfortunately but perhaps inevitably, she was not.

My own highpoint of outrage at questionable museum morals was brought about by another calculated provocation by an Amsterdam museum. In 1992 the Stedelijk Museum held an exhibition of the work of Jeff Koons, including effigies of cultural heroes like Michael Jackson and Koons’s ex, Cicciolina, having life-size plastic sex with the artist. The museum bought not one of those but a group in polychrome wood with a title more expressive of Koons’s program, Ushering in banality. 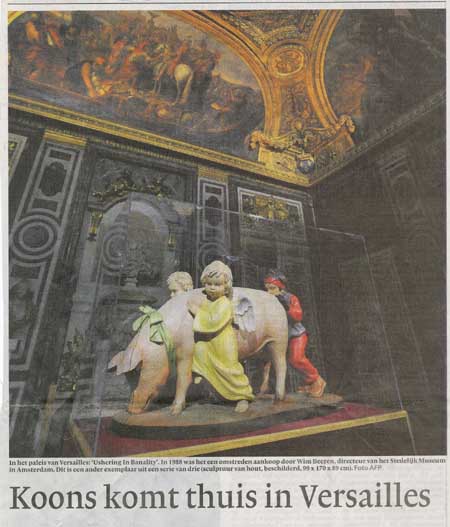 A pig with a ribbon around its neck is being pushed along on the flanks by two kewpie-doll blonde angels and from behind by a dark-haired street kid. The craftsmanship, the work of assistants, is no greater than that of the sentimental souvenirs it resembles. The piece ushered in not so much banality as cheapness, insincerity, appeal to gut feelings, anti-intellectualism paired to anti-estheticism, commerciality, an insult to the rest of the collection and a harbinger of a world without any serious art at all. Marcel Duchamp and Andy Warhol I admire, but this was too much. At the opening, shuffling past these appropriated creations with the fine fleur of the Dutch art world, I felt as offended as if I had been cast unwittingly in the role of a Tom Wolfe phony, admiring the emperor’s new clothes.

One reason I didn’t do any shouting at the time is that I was not that sure that my outrage didn’t reflect more on myself than on Jeff Koons and Wim Beeren, the Stedelijk director who made the purchase and mounted the show. I knew that art undergoes fundamental changes from time to time, and that the “shock of the new,” as Robert Hughes described reactions to Impressionism, will always overwhelm those overattached to the former state of things. Another reason is that I didn’t want to line up beside the kind of prudish critic who attacked Koons just because his subject matter was sexually explicit. People like Jesse Helms or Charles-Emmanuel de Bourbon-Parme, who in the closing days of December 2008 lost a court case in which he tried to get the Koons exhibition in Versailles closed because it desecrated the place with porn. Versailles! I got a fresh charge of indignation when the Koons exhibition opened there last fall. But I had to admit that I was less sure than ever that Koons does not belong in a museum. Or an ancien-régime palace. Koons claimed grandiosely that coming to Versailles felt to him like coming home. Indeed, was Louis XIV any less egotistical and manipulative than Koons? 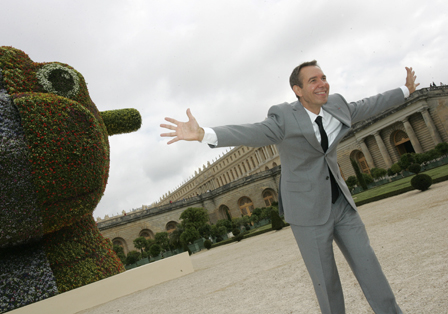 1992 was not the first time in my life that I had experienced moral shock in a museum. My disgusted reaction to the work of a certain old master could have prepared me for the Koons shock and for Hirst. But I did not draw general conclusions from it. The artist to whom I reacted badly was Lucas Cranach. 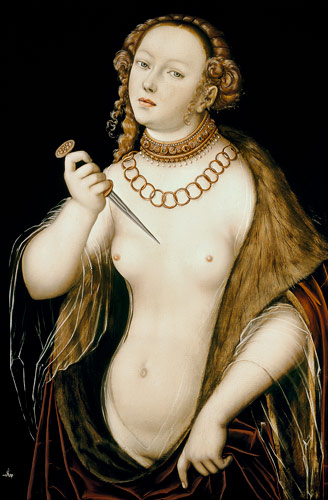 If Hirst exploits violence and Koons sex, Lucas Cranach went after them both in combination. Cranach has gotten into the best collections and museums in the world with paintings of the suicide of the rape victim Lucretia. He wasn’t the only one to paint that subject, of course, but Cranach went for the most sensual effect he could achieve. As it seems to me, Cranach was expecting male viewers to be turned on not only by the vulnerable beauty of his half-naked Lucretias, but also by the anticipated plunge of the dagger into their bodies. You do not have to be a feminist to be revolted by Cranach’s idea of Lucretia as a coquette to the death.

The question is: where do you draw the line? Is there a point beyond which love of art brings you to betray yourself? My friend sees it in the extreme case of Hirst. But you can start much closer to the mainstream. Had I drawn general conclusions from my reaction to Cranach, I would have found myself rejecting not only all slasher imagery but most of Christian art, with its sacralization of violent death. Let alone so much art of pre-Columbian, African and Asian civilizations. Since I did not do that, and did not condemn Koons, I seem to have chosen to live with my discomfort rather than elevate it to a standard to hold up to others. Whether I can live with it indefinitely remains to be seen.

The beginning of the financial crisis is dated these days to 15 September 2008, when Lehman Brothers crashed. Shares that in March had been trading for $39 and for $2 at the opening on the Ides of September (as if that were not crisis enough) closed that day at 21 cents. Dazed investors who were wondering why in March they thought the shares were worth 185 times more than they fetched in September will have gotten a flash of wry recognition from a piece of news from the art auction houses on 16 September. On that day Sotheby’s in London ended a two-day sale of more than 200 works by Damien Hirst, including multiples manufactured in his 175-man studio, that fetched $198 million. The prize piece – I am not making this up – was The golden calf, an embalmed calf with golden hooves and horns, which was sold for $18.5 million.

No one can say that Hirst did not give fair warning. Just read Exodus 32, where the story of the golden calf is told. Two sources of value are played out against each other: “the two tablets of the Testimony, the tablets of stone inscribed by the finger of God” that Moses received from God, versus the golden “idol cast in the shape of a calf” by Aaron. The people of Israel lost patience with Moses and his jealous God and worshipped the golden calf instead. “When Moses approached the camp and saw the calf and the dancing, his anger burned and he threw the tablets out of his hands, breaking them to pieces at the foot of the mountain. And he took the calf they had made and burned it in the fire; then he ground it to powder, scattered it on the water and made the Israelites drink it.” How long before the buyer of Hirst’s Golden calf and his other idols will be drinking not even water but formaldehyde?

God was good enough, after slaughtering 3,000 of them, to give the Israelites a second chance, and they were smart enough to take it. Participants in the financial world too will be given a second chance, but they will have no choice between two competing systems. There are no tablets inscribed by the finger of God in which they can safely put their faith. (To see what the so-called fundamentals are worth, just look around you today.) The only place for them to bring their goods is the worldwide money market, the shrine of the golden calf.

Actually, I do have a solution for the crisis or at least a measure to prevent another one. All you have to do is earmark money. The present destabilization of the markets could take place because there are thousands of billions of dollars out there sloshing around freely. Much more than can be nationalized without risking the bankruptcy of entire countries a lot bigger than Iceland. In that situation, a tsunami will occur sooner or later. The solution is to build seawalls between the various kinds of liquidity. Mortgages can only be financed out of basin M, households from basin H, industry from basin I and so forth. That way the height of the waves, the extent of volatility, will be limited. An extreme incident in one basin will not have as great an effect on the others as what we see happening today.

The cost of this solution is however probably too high for people to accept. It would cost them their freedom. Some super-agency with Gestapo-like powers will tell everybody what they can and cannot do with their money. I’m afraid that the tensions this would create would make a truly rigorous system of this kind unsustainable. So here we go back around the mulberry bush, until once more Pop! goes the weasel. Don’t let any economist or banker tell you the Pop! is unpredictable. Few things are more certain.

I see to my surprise that of the four publications I produced in 2008, aside from Schwartzlist columns, three are on Jewish subjects. Pure chance. Of the five articles in press, four are about goyim. The coming attractions are on:

“The Temple Mount in the Lowlands,” in: The Dutch intersection: the Jews and the Netherlands in modern history, edited by Yosef Kaplan, Leiden and Boston (Brill) 2008, pp. 111-21

Het rijke joodse leven (The rich Jewish life), Bernardus Hartogensis Lezing 2008, published on the day of the lecture, 14 December 2008. More on this another time

Have a good year. Do the things that really matter to you.