The recently closed exhibition Images of Erasmus at the Boijmans Van Beuningen Museum in Rotterdam rightly introduced Hieronymus Bosch into Erasmus’s sphere. Schwartz reveals unsuspected truths – well, at least possible truths – about the two of them.

In the last rooms of its splendid exhibition Images of Erasmus, celebrating the 500th anniversary of the publication of The praise of folly, the Boijmans Van Beuningen Museum in Rotterdam pulled out of its sleeve two of its own paintings by the great Hieronymus Bosch. In the section on Church and religion, it hung St. Christopher carrying the Christ child. The link drawn in the exhibition booklet between Erasmus and this painting was antithetical. Erasmus’s Folly said contemptuously of images of St. Christopher, as of Sts. George and Barbara, that the absurd stories told about them led people to worship them “more religiously than Peter, Paul or even Christ himself.” Bosch’s rather large St. Christopher is thought to have been painted for the chapel of St. Anne in Den Bosch, where it would indeed have been worshipped out of the popular belief that a Christian would not die on a day when he had paid his respects to an image of the giant who had carried the Christ child safely across a river.

The other Bosch in the show is The peddler, still sometimes called The prodigal son. “The great pioneer of satirical painting, Hieronymus Bosch, had already painted his profane work before the Praise of folly was written,” says the brochure. “This painting,” we learn, “is by no means as unambiguous” as Bosch’s “scenes of conjurers and stone-cutting quacks,” which expose deceit and trickery.” Erasmus would have known what Peter van der Coelen, the curator of the exhibition, was talking about. He too was a master of ambiguity. Folly puts the reader constantly off balance with statements so outrageous that you don’t know whether the opposite was intended. And Erasmus himself drove half of Europe to despair with his pseudo-declarative but actually noncommittal pronouncements on religion, his fence-sitting and his dissimulation.

This is all fine as far as it goes. But you can go further. Since I found out about it 20 years ago, I have been fascinated by a piece of historical synchronicity involving those two mocking moralists. From 1484 to 1487 their paths crossed in circumstances suggestive of a possible meeting. Following the death of his father in 1484, the eighteen-year-old Erasmus was sent to Den Bosch to study in the Latin school, run by the Brothers of the Common Life. That school lay in the Schilderstraat – the street of the painters – a few doors from the house of Aleit de Meervenne, the woman to whom Hieronymus Bosch, born about 1450, had been married at least since 1481.

I get a kick just from thinking about Erasmus and Hieronymus Bosch breathing the same air. What would they have thought of each other? What kinds of intellectual overlap would they have shared? 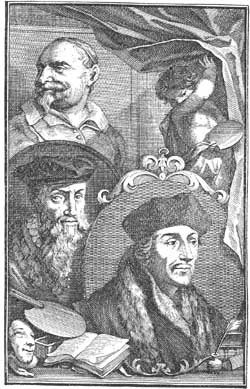 When I want an even bigger kick, I let myself go in fantasizing about the recurring rumor that Erasmus was actually trained as a painter. Believe it or not, the first lemma in one of the first biographical dictionaries of Dutch painters, by Arnold Houbraken (1718-21), is on Erasmus.

The supporting material was sufficient to tempt the art historian Maurice Brockwell in 1918 to write a 100-page book entitled Erasmus: humanist and painter. There might have been more to the temptation than just the factual evidence. Brockwell’s book, and presumably a generous author’s honorarium, was paid for by the St. Louis collector Edward A. Faust, owner of the Crucifixion triptych that in the book is unreservedly attributed to Erasmus. Not even Brockwell entertained the fantasy that I allow myself to indulge in when I’m tired. Erasmus later wrote that he was bored and annoyed by the Latin school in Den Bosch. And it was there, in 1484, that according to 17th-century sources his first painting was begun, a “Christ on the Cross, with Mary and St. John, in the style of the old Dutch Masters.” When it was recorded in 1667 by the city historian of Delft Dirk van Bleyswijck, the painting was owned by the Augustinian monastery of Steyn, near Gouda, to which Erasmus went straight from Den Bosch. As it happens, Bosch’s only painting of this subject, also in the style of the old Dutch masters rather than the innovative mode we know and love, was painted while the young Erasmus was in the … studio? In any case the neighborhood. You have already guessed my daydream: Erasmus was trained as a painter by none other than Hieronymus Bosch. 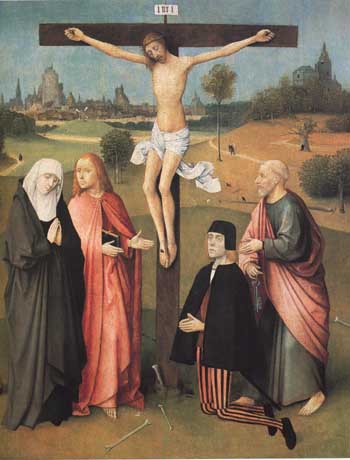 The Bosch Crucifixion was the kind of reserved and dignified religious image of which Erasmus approved. In 1533, van der Coelen reports, Erasmus wrote “that even a scholar sometimes saw more in a picture than in a text and was moved more profoundly by it. He illustrated this with the image of the crucifixion. When we see Christ hanging on the Cross it affects us more than when we simply read about it.”

Erasmus was in Den Bosch when Hieronymus Bosch joined the venerable Brotherhood of Our Lady, founded in 1318, a society to which everybody who was anybody in the city and beyond it belonged. It was located around the corner from Erasmus’s school, with which it had regular ties, including commissions for illuminated manuscripts from the college scriptorium. Hieronymus was more than a regular member of the Brotherhood. He was a sworn brother, meaning that he took minor clerical orders. He wore a tonsure and proceeded through the lower ranks on his way to becoming an acolyte. You started as a doorkeeper before becoming a lector and then an exorcist. Yes, that great imaginer of demons Hieronymus Bosch was either an exorcist or an exorcist-to-be. He entered on that path moreover in the very year that in Germany the Malleus maleficarum was published, the manual for identifying and persecuting witches. As for Erasmus, for all his critical skepticism, he did not reject outrightly belief in witches. The two of them each pursued demons in their own way. The musical Hieronymus by T.E. Breitenbach casts Erasmus as a villain who attempts to have the artist arrested by Church authorities for the practice of black magic. Laurinda Dixon, in her outstanding book on Bosch, finds only parallels in their work and values. The most poignant is perhaps their shared identification with St. Jerome, Erasmus’s great model and Hieronymus’s name saint. Erasmus is Jerome in his study, Bosch Jerome in the wilderness. Having gone this far, I will hereby suggest that Bosch’s St. Jerome in Ghent is a historicized self-portrait of the artist at the age of about 50. 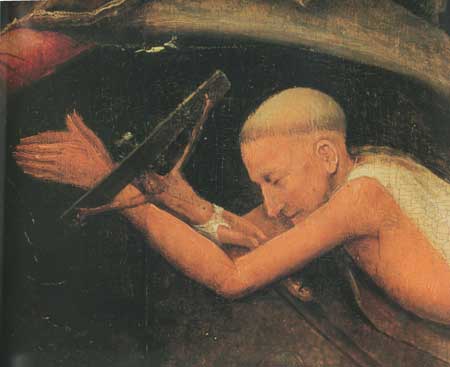 Be all this as it may, one quality possessed by Erasmus nearly uniquely among men of letters is an artistic one. That is his talent as an image manager, starting with the image of himself. As co-designer of his immensely influential portraits by Hans Holbein and Albrecht Dürer, he had more impact on the history of Western imagery than most artists. That impact went into the shaping not only of appearances but of complete lives, even of the world of scholarship in its entirety. The semi-sanctity (and some of the sanctimony) of our profession derive from those portraits and their offshoots. While so many academics are indifferent to and ignorant of the visual arts, if not sheerly antagonistic to art, following Plato and their own lack of taste, Erasmus stands out for his knowledge of art and artists, his respect for art and his ability to put it to potent use for his own purposes. In opposition to the usual cliché, when we see Erasmus being a dedicated scholar it affects us more than when we simply read his writings. Hieronymus Bosch could not have wished for a better pupil.

© Gary Schwartz 2009. Published on the Schwartzlist on 11 February 2009, announced to subscribers on 20 February.

Please excuse me for not writing this column until after the Erasmus exhibition in the Boijmans Van Beuningen Museum ended. I seem to be running behind again.

We returned on Tuesday from a long weekend in Florence. What a pleasure to be there out of tourist season. I must admit that on several past warm-weather visits, even as far back as the 1960s, I was unable to enjoy the city. The nadir was reached in May 2002, when we arrived by train from Prato and were so turned off by the crowds and the row to get into Santa Maria Novella that we got straight back on the train and went to Pistoia instead. (Dates and exact circumstances dredged up from memory and sloshed around a bit.) Since we had sunny weather last weekend, there was nothing to bring Florence down. The limiting factor was our own sybaritically slow tempo. We were staying at the Netherlands Institute, where we made our own leisurely breakfast, however late we liked. The upshot was that by the time we got into town and recovered from the effort with a shot of espresso or a bowl of ribollita, lots of attractions were already shutting down. I have the feeling that closing the churches at 1:30 or 2:00 (San Lorenzo, all the cenacoli) is not only a way to save money for the city but also to give the staff a chance to take a second job.

The Dutch Institute is some two kilometers into the Oltrarno, on the Viale Torricelli. If it hadn’t been, we probably would never have discovered a hidden treasure that I pass on to you. From the Porta San Giorgio, which is a steep climb from the Ponte Vecchio, there is a magical winding country road up to the Viale Galileo. It is enclosed by high walls on either side, behind which lie villas and gardens and churches that set your imagination on fire. The effect was heightened when the priest of the church of San Leonardo, which gives its name to the Via di San Leonardo, refused to let us onto the grounds.

As an additional enticement to take that walk next time you are in Florence, no matter where you are staying, here is a photo of the detailing on a stretch of bare concrete wall. Whether it was part of the commission or just the workman’s irrepressible need to break the boring surface, it shows that the Florentine urge to design is capable of beautifying anything at all. 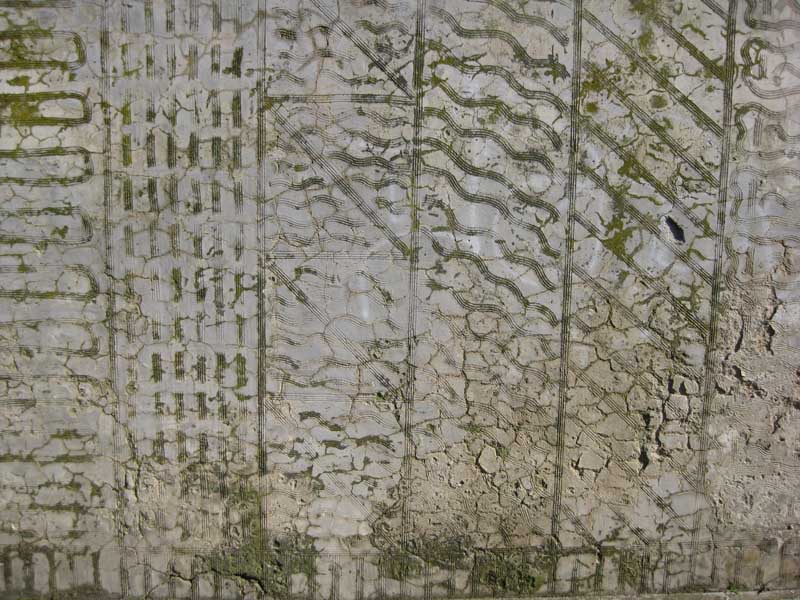 Capable, but unfortunately not always willing. Because of a few misunderstandings about which the less said the better. we unnecessarily spent an hour on bus lines 14 and 18 and 28 riding around in circles in Careggi and Dalmazia and Castello, trying to get to the Medici villa of Castello, which we eventually found. (Lines 18 and 28 stop near the avenue leading to the villa. Do not listen to the woman at the information office near the train station, who will put you on bus 14.) Seldom do you see such undesigned stretches of space. The callous piling up of lots and ugly, shapeless buildings, with a cynical refusal to make even the slightest concession to the eye or the sense of form, makes you think that there has been a new barbarian invasion in Florence. The people who made the Via S. Leonardo must have been driven out by some alien strain who hate everything the original population stood for. No photos taken.