Diego Velázquez was a better artist than his master, Francisco Pacheco. This is reason enough for some art historians to deny that Pacheco, the leading Seville artist of his day, was a formative influence on his pupil. Schwartz sees this as an affront to the historical study of art, and he rallies to set matters straight. Below the line his welcome greeting to the new Dutch government.

When he was eleven years old, Diego Velázquez (1599-1660) was apprenticed to his second master in the art of painting, the learned Seville artist Francisco Pacheco (1564-1644). Pacheco, a member of a very well-connected family, was far more than a glorified craftsman. His studio was a salon for the artists and art lovers of the city. In the years before Velázquez came to him, Pacheco executed his most ambitious work, a multi-panelled ceiling in the Casa de Pilatos, the city residence of the Duchess of Medinaceli. 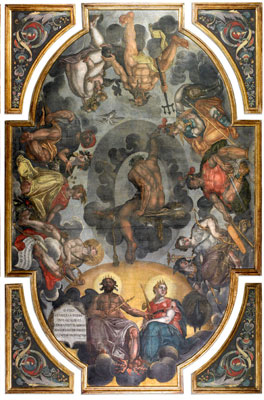 Francisco Pacheco, central panel of a ceiling in the Casa de Pilatos, Seville, 1604

The themes are derived from classical mythology, for which he enlisted the advice of humanists in his circle. This did not stand in the way of Pacheco’s appointment in the 1610s both by the city government and the church as supervisor of the doctrinal reliability of the art produced by his colleagues. Most of his own work was made for the churches of the city. He satisfied his intellectual ambitions by writing a three-part manual for painters that was however not published until five years after his death. Francisco Pacheco was the leading artistic personality of Seville.

Velázquez remained with Pacheco throughout his teen years, and at the age of nineteen, following his apprenticeship, he married his master’s daughter Joana, Pacheco’s only child. Three years later, following an initial visit to Madrid, he was summoned back in order to succeed the recently deceased painter to the king. Pacheco, who was befriended with the all-powerful Count-Duke of Olivares, accompanied him. After painting a portrait of the king in a single day, Velázquez was granted the exclusive license to portray Philip IV and his court, the beginning of a lucrative, lifelong career at court that came to him via the contacts of his father-in-law.

If the above background gives you the impression, as it does me, that Francisco Pacheco had a significant influence on the formation of the artist Diego Velázquez, you will find yourself in disagreement with some of the best art-historical thought on the subject. One of the nestors of our field, Willibald Sauerländer, had this to say on the subject in the September 30th issue of the New York Review of Books:

Velázquez was apprenticed until 1617 to the painter Francisco Pacheco, known to posterity more for his writings on art theory than for his prosaic pictures. He probably taught the young Velázquez the technical aspects of painting and introduced him to the world of books and scholarship.

The foremost specialist in the United States on Spanish painting, Jonathan Brown, interprets the relation between master and pupil in similar terms (Velázquez: painter and courtier, 1986, p. 15):

Pacheco had much to teach his young pupil about the techniques of painting, but his conservative style and awkward manner of execution offered little guidance or inspiration to an aspiring youth. Even in the realm of religious art, Pacheco’s speciality, there was little to be gained by Velázquez from his teacher. 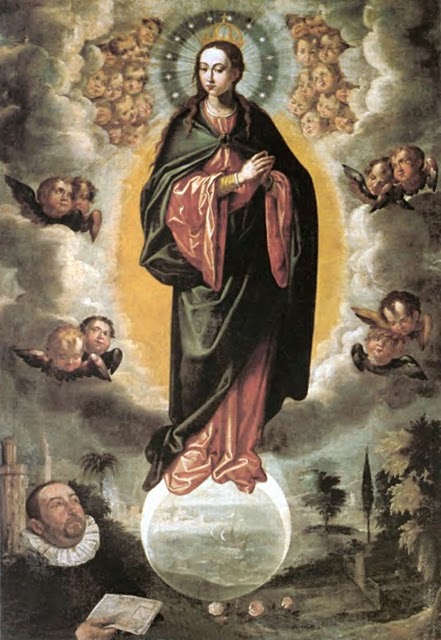 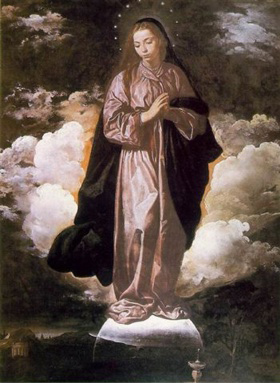 Brown’s main evidence is a comparison of Pacheco’s Immaculate Conception with donor in the Cathedral of Seville with Velázquez’s interpretation of the same subject, painted for the convent of the Shod Carmelites and now in the National Gallery, London. In his book the Velázquez (here on the right) is illustrated in a full-page color plate, the Pacheco in a small black-and-white figure.

The Virgin of the Immaculate Conception, a favorite subject in Seville, was painstakingly described by Pacheco in his treatise…. Whether the composition [of Velázquez’ painting] was devised by Velázquez or Pacheco is hard to say, and only of secondary importance. More to the point are the substantial differences between the two works. Pacheco’s painting is a correct but lifeless image of a matronly, rather nondescript woman, while Velázquez’ shows a solemn young girl with markedly individual features. (p. 25)

Why, after saying that Pacheco wrote a detailed iconographic description of the Immaculate Conception, should it be difficult to say whether he or Velázquez devised Velázquez’ composition? How could it not have been devised by Pacheco? Because however Velázquez was a better artist than Pacheco, Brown finds it impossible to compare the two, even in situations when Pacheco was clearly the leading figure, without putting Pacheco down or subordinating him to his pupil.

In his treatment of heads and faces, the most consistently successful parts of the figures, he [Velázquez] applied small highlights of an even thicker paint, which were added after the underlayers had dried. This pictorial technique was learned from Pacheco, who describes it in his treatise. But unlike his master, who usually attempted to blend the strokes into a seamless surface, Velázquez deliberately exploited the texture and variety of the brushwork to reinforce the impression of immediacy and directness which was the principal aim of his art. (p. 29)

I turn this over in my mind. An eleven-year-old boy spends his five formative years as an artist under the tutelage of a powerhouse in the field, a force in Seville society and an ecclesiastical authority – and learns little from him? That Velázquez derives compositions and iconographies of his early work from his teacher is only of secondary importance because the pupil’s brushwork is better? Not only is the history of this relationship all wrong, so is the psychology. The dependency of Velázquez on his master, his mentor, his father-in-law and the promotor of his career cannot have been of secondary importance in his formation as an artist. To say so is to practice an art history that subjects all other considerations to the quality judgment of the present-day connoisseur. It comes forth out of an approach that makes more of fine distinctions than broad similarities. Where the bulk of humanity would properly see only marginal differences between the two Immaculate Conceptions, the connoisseur sees such essential differences that Pacheco and his son-in-law, far from sharing most values in art and life, exist in separate domains, the one in the realm of immortal mastery, the other in that of embarrassing mediocrity.

Willibald Sauerländer and Jonathan Brown are two of the best art historians alive and the most historically knowledgable. If they have badly misinterpreted the relationship between Pacheco and Velázquez, I attribute this to their unquestioning acceptance of the mandates of connoisseurship. This is too bad not only for the facts at hand, but also for the status of connoisseurship. Of course this discipline is important, even essential, for the study of art. Works of art are not only historical relics; they also are here in the ever-changing present and must be judged for quality by present-day standards. The close looking practiced by the connoisseur is also of immense value for the historical study of art. But connoisseurship cannot function properly if it blots out historical understanding, as it tends to do. That apologists for connoisseurship miss this point is too bad for their own cause.

Writing an aggressive column was I suppose a way of reacting to the news of the day, the installation of a new Dutch government that calls itself centrist-right when in fact it owes its mandate not to the voters but to the sneering compliance of the Islam-bashing demagogue Geert Wilders. Only with his acquiescence can the centrist-rightwingers dispose over a pitiful 76-seat majority of the 150-seat Dutch Parliament. The opportunist Wilders started out twenty years ago licking up to Dutch Muslims for their votes. In the meanwhile he has discovered that by soapboxing about the threatening Islamization of Europe and the misbehavior (in violation of Muslim family values, but that he never says) of a few thousand young Moroccans he can mesmerize the press, scare the living daylights out of all the other Dutch politicians, bring in tons of cash from reactionary Jews in the US and Israel, become the hero of international Islamophobia and garner enough votes to dictate terms to whatever Dutch government is foolish enough to think it can control him by letting him buy into their rule. He found willing dupes in the Liberal (meaning the opposite of what it means in the US) Mark Rutte and the Christian Democrat Maxime Verhagen. Neither of them had the good sense and guts of Fredrik Reinfeldt, the conservative Swedish prime minister who found himself in the same bind after elections there, losing majority support in Parliament for his government and seeing a populist party pick up the slack. Rather than climbing into bed with the xenophobic Swedish Democrats the way Rutte and Verhagen have done with Wilders, Reinfeldt said in simple words why this was out of the question. The populists were undemocratic, unreliable and represented values with which his party would never wish to be associated. That power-hungry Dutch politicians were unable to take this stance and that they go on instead about what a great group their minority cabinet is, puts my country to shame.

Our road trip to Prague via Wolfenbüttel and the Erzgebirge in eastern Germany on the way out, and Marienbad and Gotha on the way back, was delightful. On the mid-Wednesday, I gave a lecture on Rembrandt’s orientals in the halls of the Sternberg Palace, where the National Gallery shows its European paintings. In Prague, we descended into town only once from the Castle Hill where we stayed and where the gallery lies. The irresistible Bohemian brick and mortar is still there, but we were horrified that nearly everyone in the streets was a tourist or in the tourist trade, and that nearly every shop was geared to tourism. If Prague does not learn to dose visits, it will lose not only its charm but its soul.

We spent two days visiting the great Hrad, a city above the city. One of our new discoveries was the Lobkowicz Palace. It houses a magnificent family collection and also major works by Pieter Bruegel and Antonio Canaletto. After confiscations by the Nazis and then the Communists, the property was recovered by the Lobkowicz family in 2002. They have put a fortune into restoring it, and they now guide visitors through the palace with an informative audio tour narrated in American accents by the Bostonian son of the Prince Lobkowicz who fled the country two generations ago.

Sunday we are repeating the performance, in southeast Europe. On Wednesday evening I will be lecturing on the same subject at the University of Athens, and again we have tacked on a few days before and after for seeing sights and friends. Among the friends is the painter Philip Tarlow, whom I have known since university days in the US in the early 1960s. He lived in Greece for many years and became part of an artistic movement that combined vernacular themes, in a modernist realist mode, with the techniques and respect for the subject of icon painting. Philip was married to the daughter of one of those painters. He has an exhibition running in Athens right now, and we will see each other again in Greece for the first time since 1963. 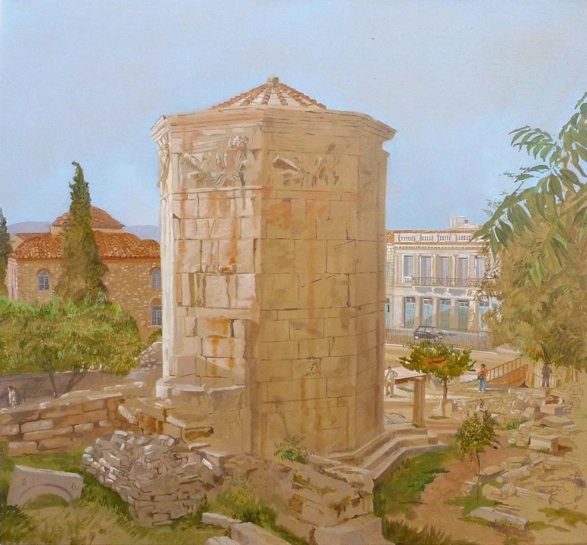 Philip Tarlow, The tower of the winds, Athens, 2010, intermediate stage of work in progress.